A peregrine falcon catches a parakeet in mid-air with its talons as it teaches its chick how to hunt.

The peregrine caught the rose-ringed bird in mid-air with a single strike from its sharp talons, then approached its nest to entice its chicks into the air and help them hone their flying skills.

The series of pictures were captured by -based wildlife photographer David Element, 64, who had been following the development of four peregrine chicks being raised in South London. 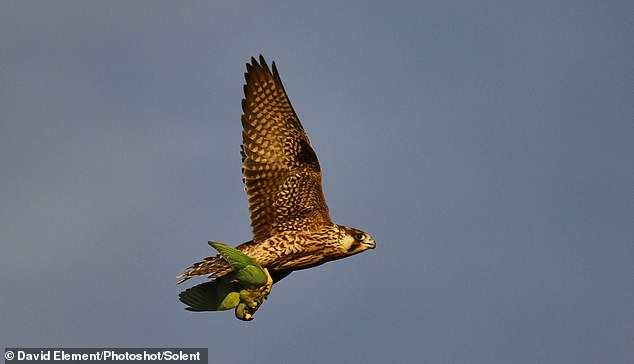 The young peregrine catches the parakeet in its talons. The young bird flew around with it for a while before landing, plucking and eating the prey. The picture was captured by wildlife photographer David Element, 64, who has been following the four chicks

Parent birds will rear their young until they are able to hunt and fly on their own, passing prey to them or dropping recently killed birds for the juveniles to catch.

Mr Element said: ‘One of the photographs illustrates the beginning of a ‘drop’ where the adult male, also known as a tiercel, initially loosened a parakeet impaled by his talons with his bill before releasing it to the male juvenile flying underneath him.

‘The youngster caught it and then flew around with it for a while before landing, plucking and then eating the prey.’ 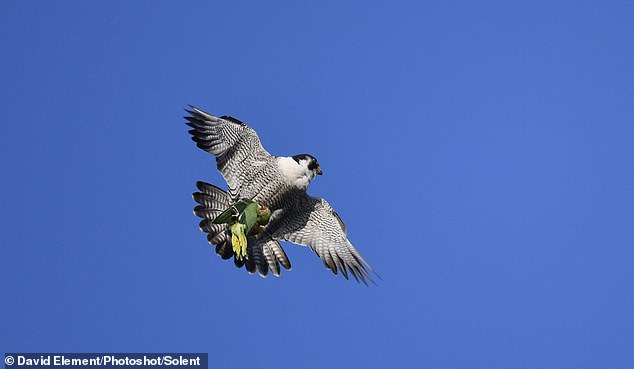 ‘The young need to practise these skills before they will be able to hunt successfully for themselves.

‘The adult’s attack on the parakeet would have been at high speed, either from altitude or after a lower level pursuit and the prey would have died instantaneously with one of the peregrine’s long hind talons dealing the fatal blow.’

He added: ‘I have never seen a kill being made by this pair, although I have observed an attack at another location in which a prey item was deliberately brought back wounded but alive.

‘This male specialises in catching parakeets as there are plenty to choose from, particularly when they are returning to roost in the evenings.’

The rose-ringed parakeet is an invasive species that first became established in areas of London and Surrey in the 1970s after domesticated birds escaped or were released into the wild.’

Mr Element continued: ‘There are apocryphal tales about their exact origin, including the suggestion that Jimi Hendrix may have released some from captivity.’ 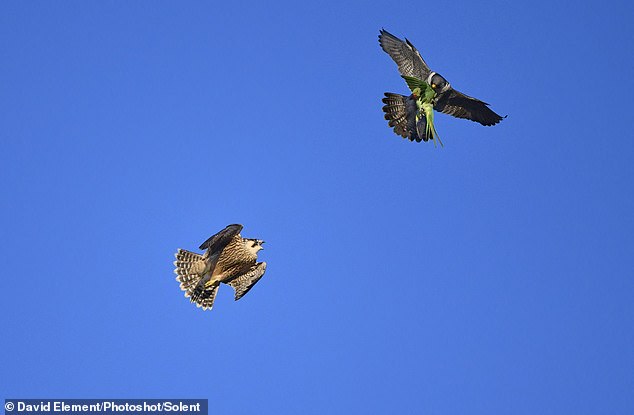 ‘This parakeet would probably have been unaware of the attack until moments before the strike was made – if at all. It is much smaller than a peregrine and it would not have been equipped to fight back.’

‘Without predation, prey species may over-populate and ultimately starve, and without sufficient prey availability the predator numbers would consequentially drop.

‘Views about parakeets are polarised, with some believing them to be an attractive and colourful addition.

‘Others consider the rose-ringed parakeet to be an invasive species that has been having an adverse effect on our birds by exploiting nest-sites in trees and therefore preventing the native species from utilising these holes.

‘It would appear that urban-nesting peregrine falcons in particular have recently begun to hunt these very visible birds in numbers.

‘As a consequence they may be contributing to the natural control of parakeets.’

The peregrine is the world’s fastest creature, capable of reaching speeds over 200mph.

The Newest: Turkey courtroom rejects enchantment for pastor's...
Wife of ex-Interpol chief held in China says she fears for her life and the lives of their sons
Kenyan warriors compete in running, jumping and spear-throwing during Maasai games replacing hunting
‘I’m GLAD he’s dead – burn in hell’ says estranged wife of Jeremy Kyle guest who ‘killed himself’
Boris Johnson tells Remainer Nicola Sturgeon the UK is leaving the EU on October 31 'come what may'
Insurance worker, 22, was blinded in one eye when microwaved eggs exploded in her face
Culture Secretary Nicky Morgan QUITS Commons after 'abuse'
Three people left with serious injuries after their car crashes into a house and bursts into flames