John McDonnell sparked a business backlash today after he signalled Labour will support a four-day working week as he backed a report which also called for the government to guarantee every adult in the UK a job.

The shadow chancellor commissioned crossbench peer Lord Skidelsky to produce a report on how to reduce working hours without reducing pay and it has recommended the public sector shift to a 35 hour week within the next decade.

The public sector would then ‘set a norm for the whole economy’ to follow.

The report also called for the government to act as an ’employer of last resort’ in order to guarantee work to anyone who cannot find a job in the private sector.

The Tories responded by claiming the move to a four-day working week ‘could lead to wage freezes, problems at hospitals and hurt low-paid workers and small businesses’.

Meanwhile, the CBI cautioned against such a policy and said ‘rigid approaches feel like a step in the wrong direction’ at a time when ‘flexible working is becoming more essential than ever’.

A CBI spokesman said: ‘Businesses are clear that politicians should work with them to avoid policies that work as a soundbite but not a solution.’

The 35 hour suggestion could mean people working five shorter days a week or potentially even moving to a four-day working week.

Labour will now consider the recommendations but when pushed on whether he intended to introduce a four-day working week, the shadow chancellor said: ‘Watch this space.’

The contents of the report and Mr McDonnell’s comments suggest Labour’s next general election manifesto could be even more radical than its controversial 2017 offering. 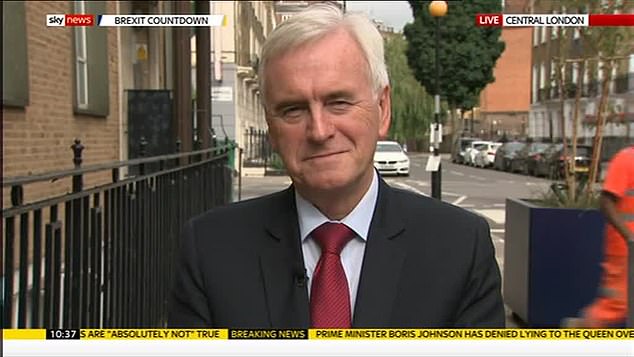 John McDonnell, pictured today on Sky News, told reporters to ‘watch this space’ when he was asked if Labour will back a four day working week 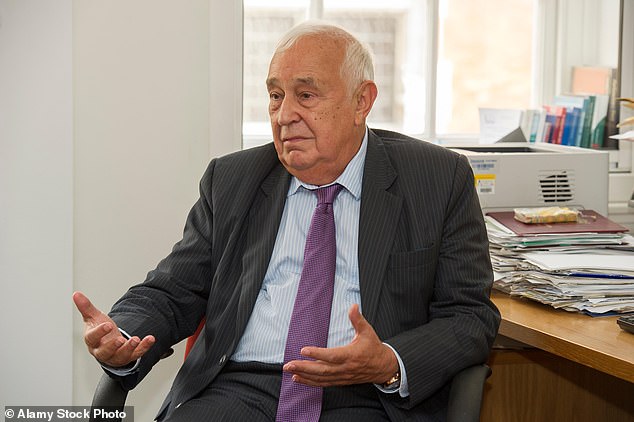 Speaking at the launch of the Lord Skidelsky’s independent report, Mr McDonell said it was ‘terrific’ and would help inform Labour policy on ‘re-balancing working hours with a greater quality of life for workers’.

Mr McDonnell said: ‘I don’t know when a general election is coming, as soon as possible as far as I’m concerned, but after we’ve got a No Deal [Brexit] off of the table.

‘We’re rapidly writing the manifesto and the findings of this report will go into our policy-making process.

‘I think a Labour government is coming and, as part of that, change is coming.’

Mr McDonnell appeared to back the report’s proposal for the government to guarantee jobs for everyone as he said: ‘When Labour are back into government, we are committing to a policy of full employment.’

Should Labour adopt all of the report’s recommendations in full and then win an election it would put the UK on course for the biggest shake up of working conditions for decades.

In the report Lord Skidelsky calls for a 35 hour working week to be introduced in the public sector by 2030.

‘This would set a norm for the whole economy.’

The report said that a 35 hour working week was a ‘sensible target’ and would mean the public sector being the ‘standard-setter for the whole economy’. It does not explicitly call for a four-day working week.

It also warned against a hard cap of 35 hours being introduced across the whole economy on the grounds it was ‘not realistic or even desirable, because any cap needs to be adapted to the needs of different sectors’.

Full-time employees in the UK currently work longer hours than in any other EU country other than Greece and Austria. The EU average is 41.2 hours a week compared to the UK’s 42.5 hours a week.

The report states that a reduction would be ‘desirable ethically and desired by most people’.

However, it stressed that the key was to find a way for people to work shorter hours without losing any pay.

The report also suggests the government should abolish unemployment by guaranteeing people work if they are unable to find a job in the private sector. 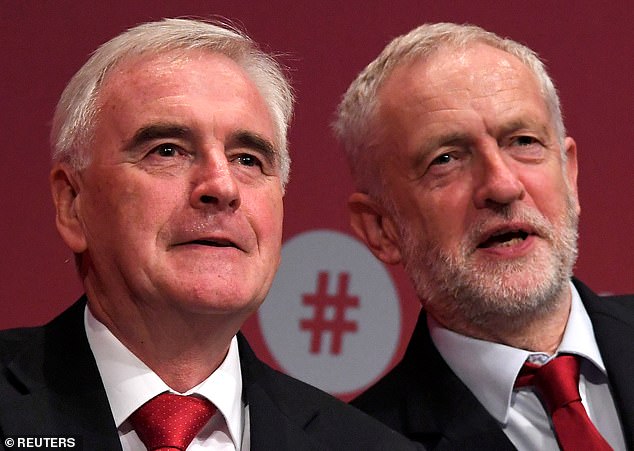 Should Mr McDonnell and Jeremy Corbyn, pictured together at Labour’s annual conference in Brighton in 2017, adopt the recommendations made in the Skidelsky report it would put the party on course for another radical election manifesto

It calls for the creation of a Jobs Guarantee Programme which would be managed by a new Department of Employment and would see the government act as an ’employer of last resort’.

‘Put simply, the government, as “employer of last resort”, should guarantee a job to any job-seeker who cannot find work in the private sector, at a fixed hourly rate which, we suggest, would not be lower than the national living wage rate,’ the report said.

‘In pledging itself to achieve this, government would be fulfilling the traditional trade union demand for “work or maintenance”, by guaranteeing work.’

The report says that such an approach ‘would cost more money than the “dole” but would deliver a much more powerful boost to the economy’.

It does not specify exactly how much such a scheme would cost.

The Tories responded to the report by suggesting that it had failed to unequivocally support Mr McDonnell’s push for a four-day working week.

Paul Scully, deputy chairman of the Conservative Party, said: ‘This is highly embarrassing for John McDonnell.

‘His own commissioned report makes clear his proposals could lead to wage freezes, problems at hospitals and hurt low-paid workers and small businesses.

‘Despite these warnings, he intends to press ahead, showing Labour will always put their hard-left ideology over what actually helps people. Labour always leave working people worse off.’

Lord Skidelsky’s recommendations also includes plans to provide financial incentives to employers to reduce working time and demands improved ‘time rights’ for employees to give people the ability to cut or add to their hours.

‘Voluntary time reduction should be facilitated by giving workers in large companies the right to reduce their working hours and then to return to full employment if they wish,’ it said.

Says all of it: An the wrong way up flag was raised exterior Peter Dutton's electoral workplace
Ukip marching with Tommy Robinson will turn party into new BNP, Nigel Farage warns
Men who are on statins may have a reduced risk of developing lethal prostate cancer
Thomas Markle fears Meghan and Prince Harry won't see him until he 'is lowered into the ground'
British father stranded in Wuhan with his Chinese wife and baby after missing 3am evacuation flight
Pink Floyd's Roger Waters and Vivienne Westwood join hundreds demanding Julian Assange is freed
Hundreds of Yellow Vest protestors clash on the streets of Paris despite coronavirus ban
Blackpool's Big One rollercoaster despite 'kick in the teeth' Tier 3 Lancashire lockdown