Horrifying images show the current condition of an insane asylum in Alabama where African American patients were held as slaves for nearly 40 years and daredevils later vandalized the interior and exterior walls with profanity-filled graffiti.

One snap shows a room at The Jemison Centre – said to be one of the most haunted places in the region – where as many as 131 patients were forced to share a bathtub while working for free in the surrounding plantations.

Run by the Alabama State Hospital for the Insane (later renamed Bryce Hospital) from 1939 to 1977, the asylum was controversial at the time and it was reported decades ago that feces were smeared on the walls, many of which are now spray painted with messages such as ‘I f**k nuns’ and ‘Free the nipple’.

According to legend, visitors hear ‘unexplained noises like screams and footsteps’ as they bravely venture around and some have seen debris being thrown or glimpse shadows, according to – a photographer who specializes in shooting dilapidated buildings. 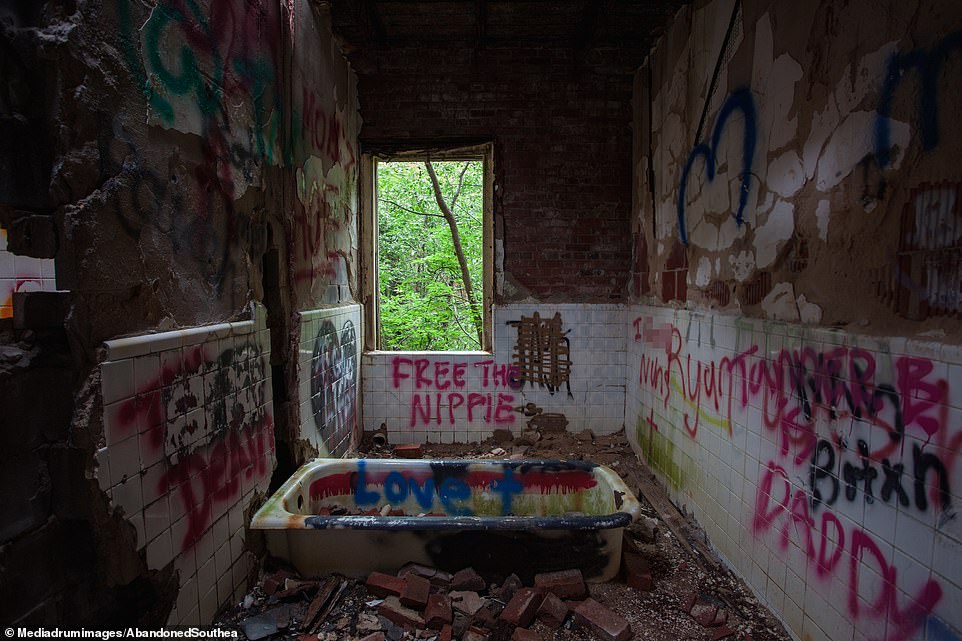 As many as 131 black male patients were forced to share a bathtub while working for free in the surrounding plantations at the The Jemison Centre in Tuscaloosa, Alabama 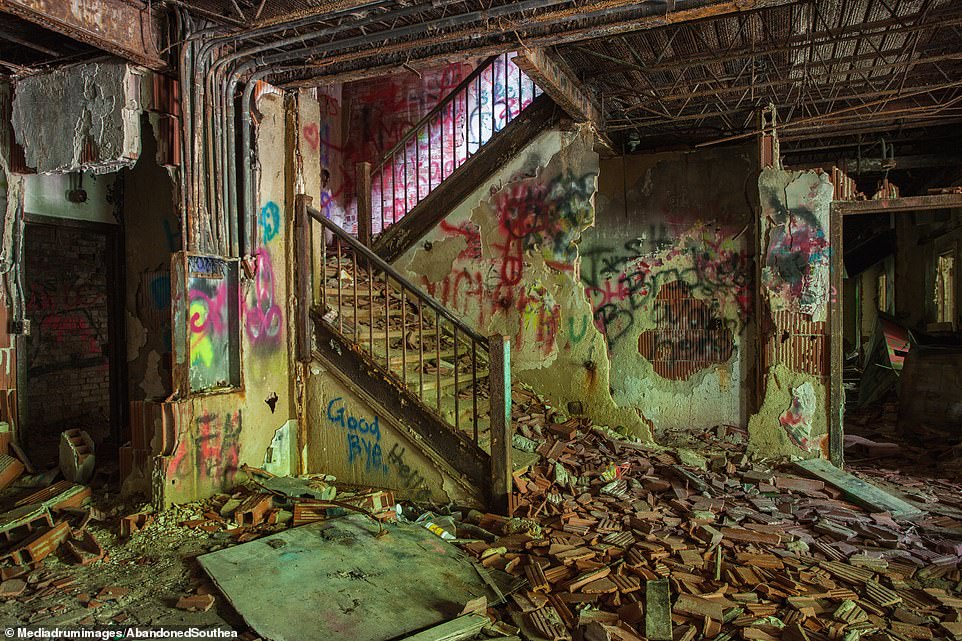 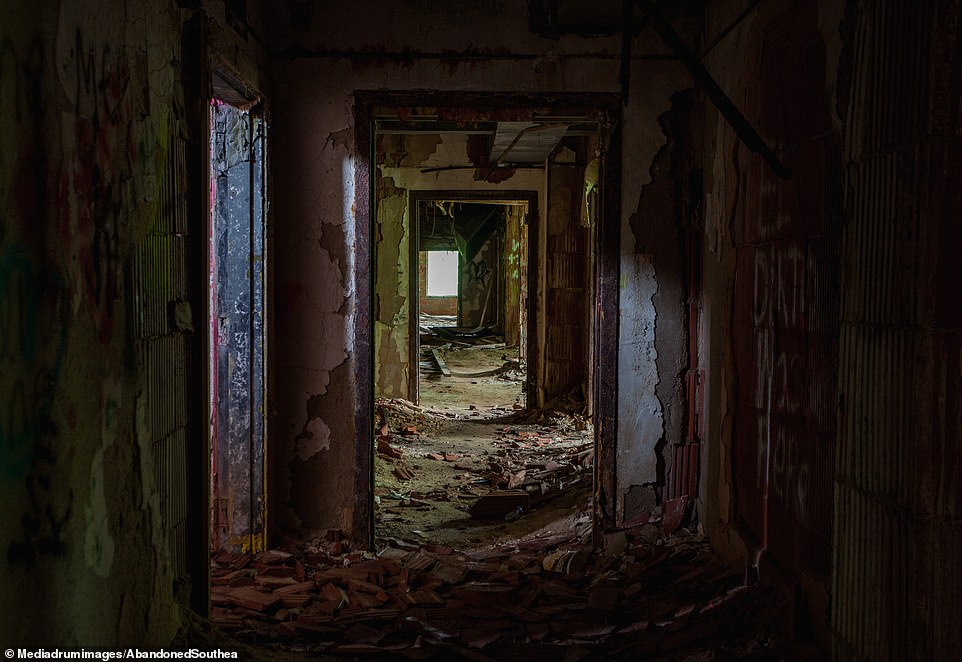 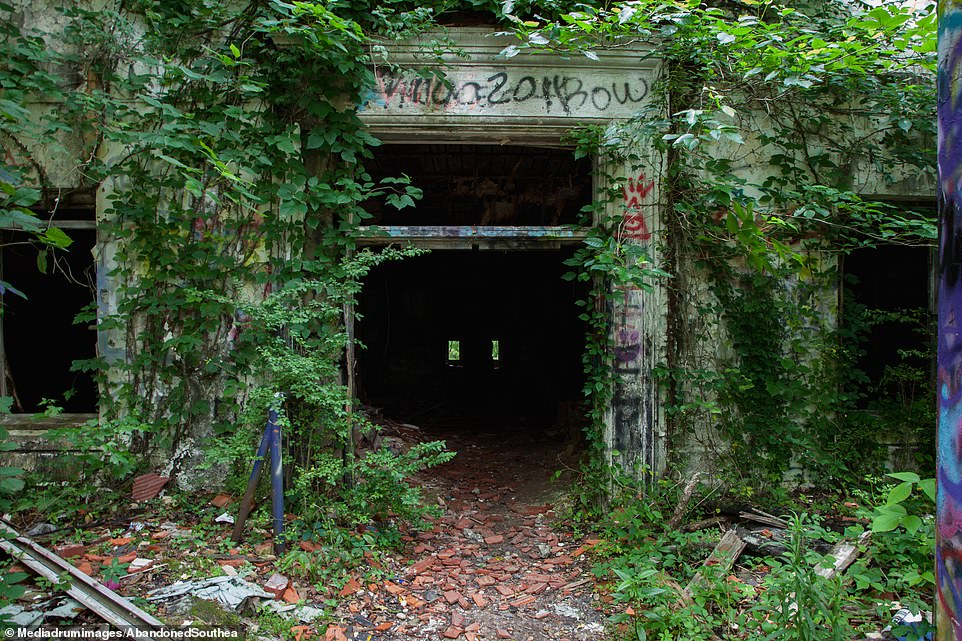 Perhaps most frightening, others have found scratches on themselves after leaving.

A reporter for the Tuscaloosa News wrote in the 70s while it was still running, that ‘human feces were caked on the toilets and walls; urine soaked the aging floors; many beds lacked linens’ and patients were sleeping on the floor.

‘One small shower served 131 male patients; the 75 female patients only had one shower too,’ the report added. Most of the patients at Jemison were highly tranquilized and appeared to have not bathed in days. All appeared to lack any semblance of treatment. The stench was almost unbearable.’

The photographer’s recent visit shows why only daredevils brave the building named after the Confederate senator Robert Jemison Jr. who passed on the Cherokee Plantation where the building stands – one of his six that sprawled across 10,000 acres – to the hospital when he died in 1871.

Due to overgrown plants little light is able to get into the abandoned building in the Tuscaloosa area and with the ceilings ripped away and chunks of the structure lying as rubble on the floors of dark rooms and eerie corridors, the old asylum is barely still standing. 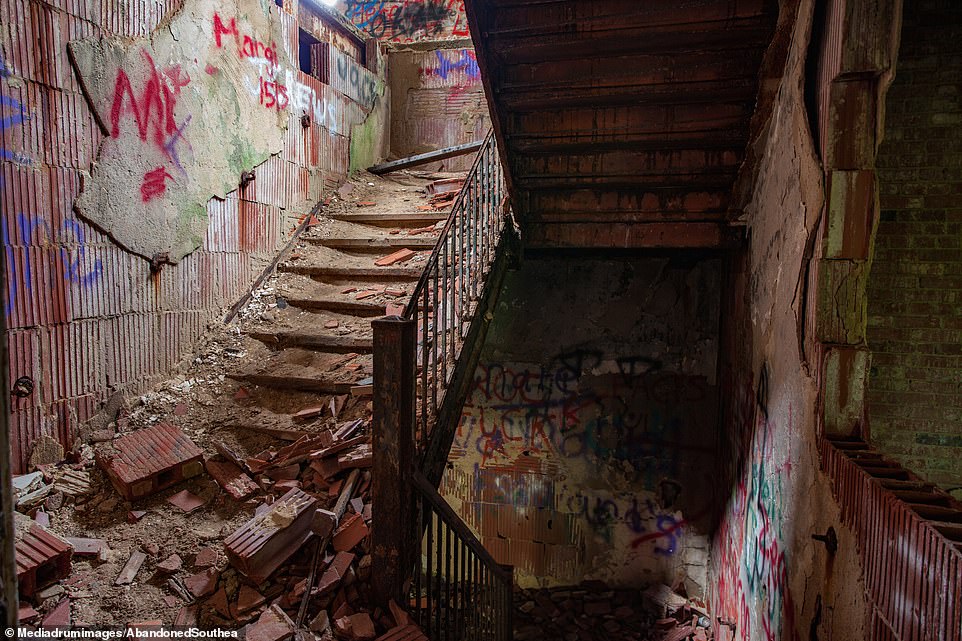 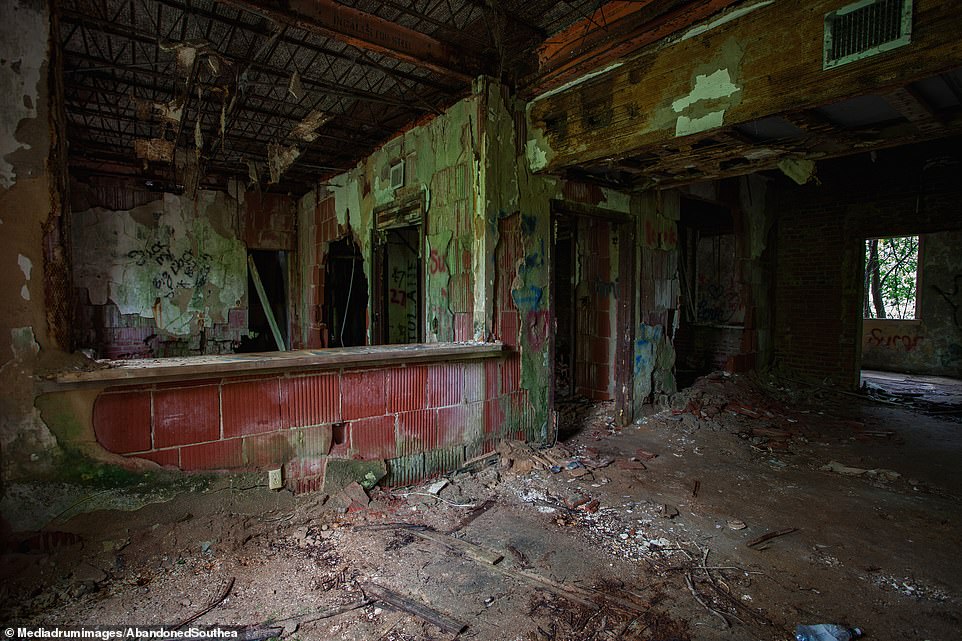 Haunted: Unexplained noises ‘like screams and footsteps’ have been heard within these walls and some claim they have seen debris being thrown around 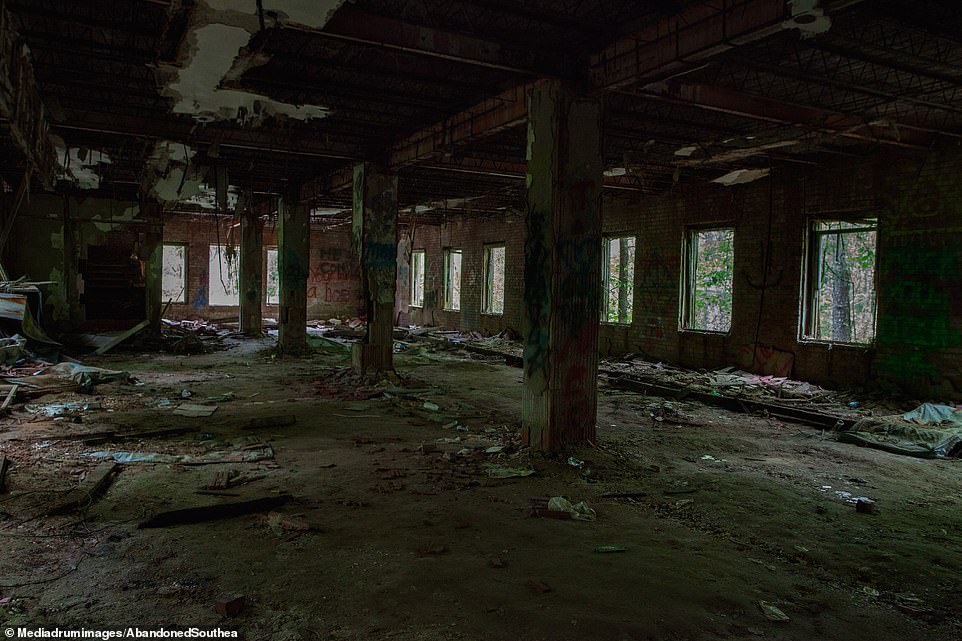 Despite it being illegal to step onto the grounds near Alabama State University, the history of disturbing abuse during the Segregation Era is just too tempting to those curious to see the set-up for themselves.

Prior to the opening of the Jemison Center in the Segregation Era, black patients were holed up in the lofts of a barn at the hospital which opened in 1861.

‘Patients housed at the Jemison Center were expected to tend the fields around the property. This was a part of the self-sustainability of Bryce as well as a way to feed a large amount of patients with limited state funding,’ Abandoned Southeast writes.  ‘Conditions at the Jemison Center and at Bryce Hospital in Tuscaloosa led to a landmark lawsuit – Wyatt v. Stickney.’

Bryce Hospital – which housed 5,000 patients in intolerable conditions – was compared to a concentration camp by media outlets at the time but it took 33 years for something to be done about it.

Eventually mental hospitals across the region were made to release some patients or transfer them to homes where labor was not the method of treatment.

The case cost $15million and Alabama saw nine governors throughout the period it took to create change with the outcome making sure patients are given the right to psychiatric evaluations from time to time and the least restrictive environment possible for them. 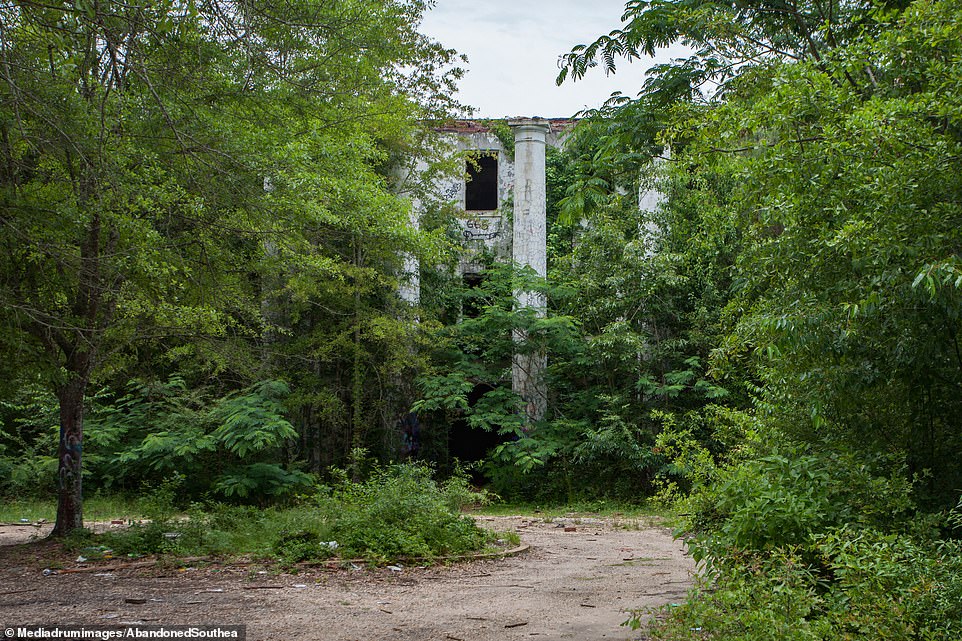 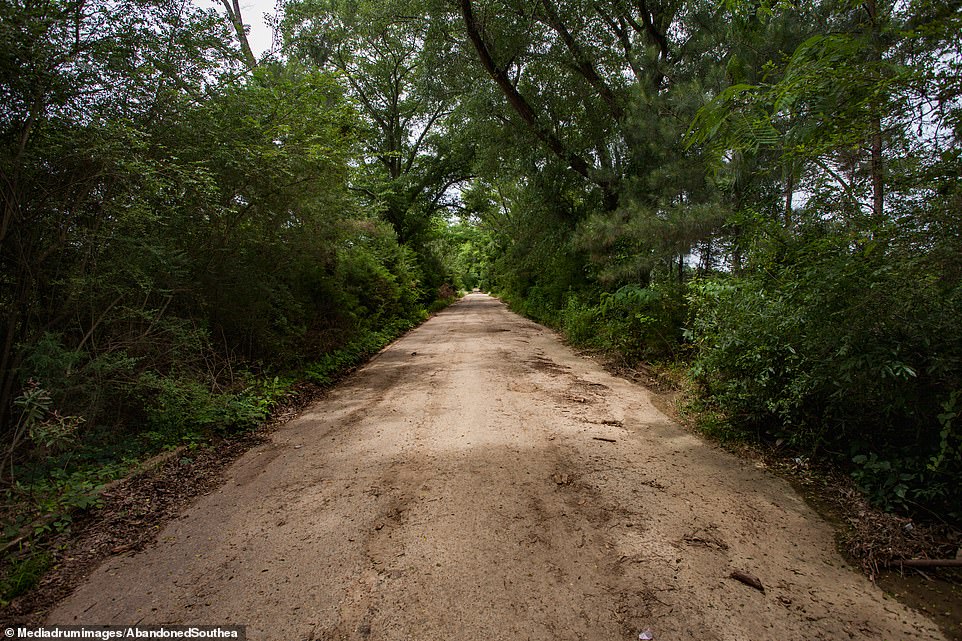 The place stands on the Cherokee Plantation which was given to Alabama State Hospital by Robert Jemison Jr. when he died in 1871 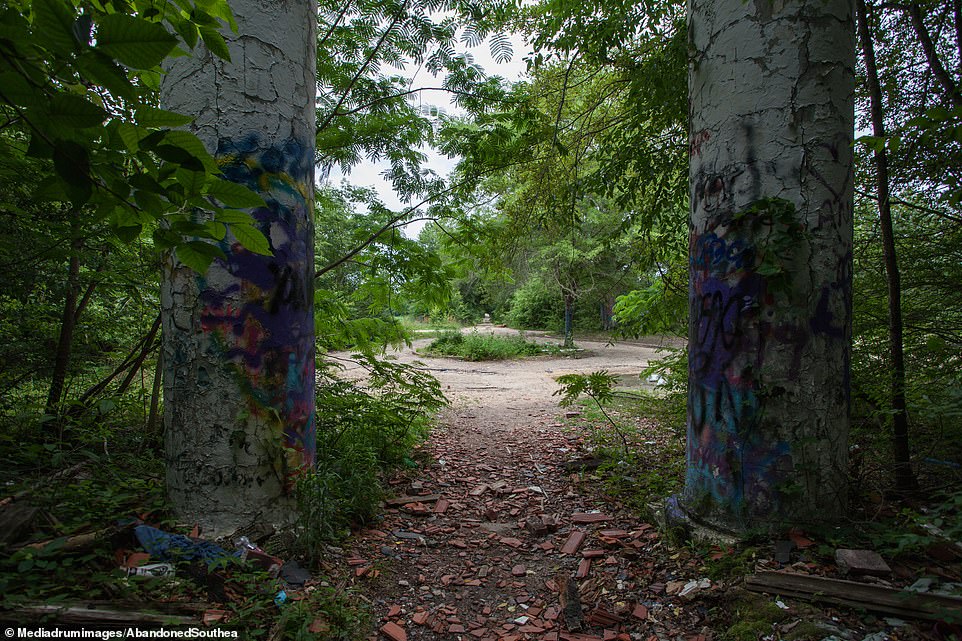