An Illinois teenager says his years of vaping landed him in the hospital with severe lung damage and fighting for his life.

Adam Hergenreder, 18, from Gurnee, Illinois, started vaping – both nicotine and THC – every other day when he was 16 years old.

Earlier this year, he started experiencing nausea and near-constant vomiting, but assumed he had the flu.

However, after visiting several doctors, a full X-ray of his lungs revealed that they were so damaged, they looked like those of a man in his 70s, reported.

Hergenreder is among 450 people across the US who have contracted mysterious breathing illnesses believed to be related to vaping.

In response to the outbreak, President Donald Trump announced on Wednesday a ban on flavored vaping products – aside from tobacco – from store shelves. 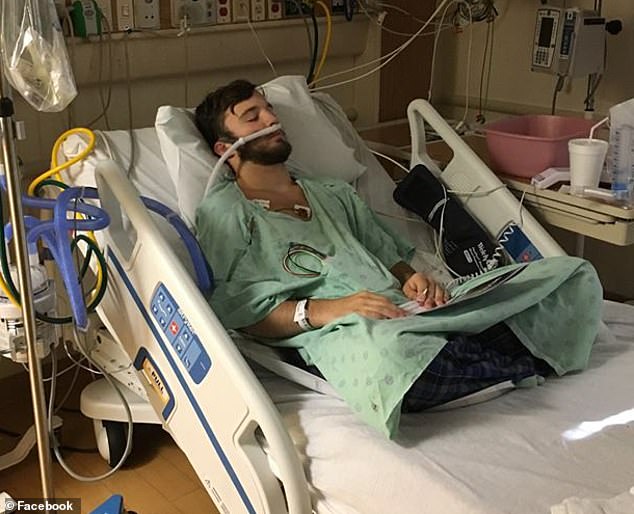 Adam Hergenreder, 18, from Gurnee, Illinois, started vaping every other day when he was 16 years old. Pictured: Hergenreder in the hospital 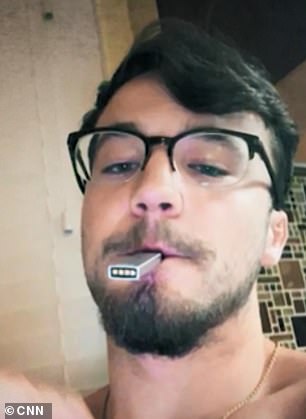 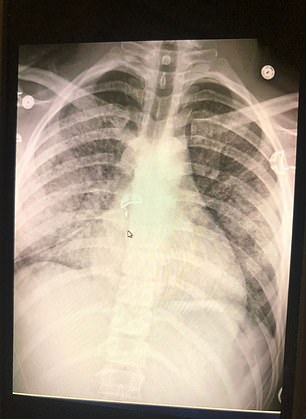 Earlier this year, Hergenreder (left, vaping) began experiencing nausea and was vomiting every day. An X-ray eventually revealed that his lungs (right) were so damaged that they looked like a 70-year-old man’s

So far, six deaths, suspected to be linked to vaping, have been reported in California, Illinois, Indiana, Kansas, Minnesota and Oregon.

Last week, reported that federal- and state- level scientists said they believe an oil derived from Vitamin E found in cannabis vapor may be responsible for the lung damage in many of the illnesses.

But use of e-cigarettes has surged since they were introduced to the US marketplace in 2007, according to the Centers for Disease Control and Prevention (CDC).

And they continue to be the most used tobacco product among US teens.

A 2017 report from the US Surgeon General found a 900 percent increase in e-cigarette use among young people between 2011 and 2015.

On Wednesday, the Trump administration proposed a nationwide ban on flavored e-cigarettes, in an attempt to discourage vaping among minors.

‘Why is that important? We are seeing an absolute surge in high school and middle school kids using these flavored products,’ said US Health and Human Services Secretary Alex Azar in a statement on Wednesday. ‘Mint, menthol, fruit flavor, alcohol flavor, bubble gum.

When Hergenreder started vaping, he was drawn to the mint-and mango-flavored nicotine e-liquids.

However, he eventually started using sticks of THC – the main psychoactive compound in marijuana – bought off the street. 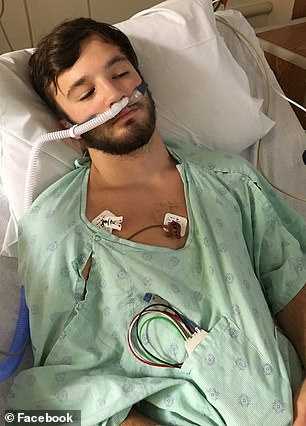 Hergenreder told CNN that, at the time, he thought vaping was safe.

‘I first started vaping just to fit in, because everyone else was doing it,’ he said. ‘It didn’t taste like a cigarette. It tasted good.’

He was never once asked to prove his age when he bought e-cigarettes, including JUULs, from his local gas station, CNN reported.

Hergenreder’s mother, Polly, said her son was vaping at least one pod – or a pod-and-a-half every other day.

According to the CDC, one JUUL pod contains as much nicotine as a pack of 20 traditional cigarettes.

‘I was just non-stop throwing up every day for three days,’ he told CNN. ‘Finally, I went to the pediatrician.’

His doctor prescribed him anti-nausea medication, but it didn’t help. Eventually, after visiting multiple doctors, one asked if he was vaping – and the teen responded ‘yes’.

CNN reported that physicians performed a CT scan and then an X-ray of his lungs.

That’s when he learned that his lungs were so damaged that they were comparable to a 70-year-old man’s.

‘It was scary to think about that – that little device did that to my lungs,’ Hergenreder said.

‘If I had known what it was doing to my body, I would have never even touched it, but I didn’t know. I wasn’t educated.’

Hergenreder was admitted to Advocate Condell Medical Center in Libertyville, Illinois, and placed on oxygen. Doctors also started him on a course of antibiotics and steroids. 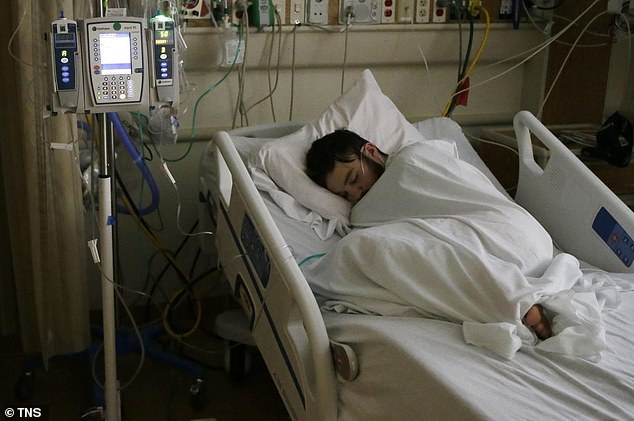 The teenager is one of 450 people across the country that have come down with mysterious lung illnesses believed to be related to vaping. Pictured: Hergenreder in the hospital 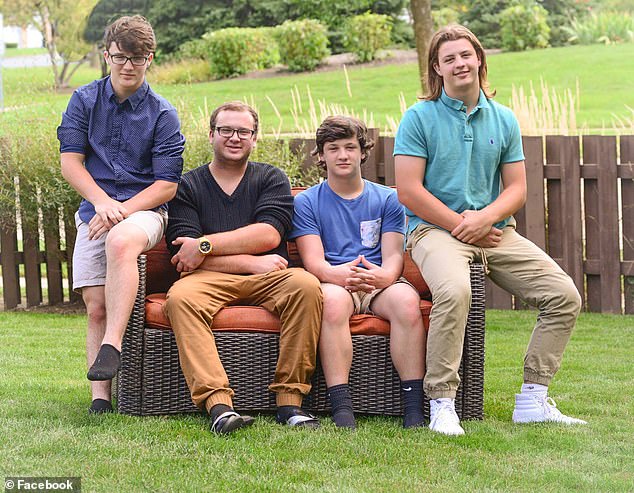 On Wednesday, the Trump administration proposed a nationwide ban on flavored e-cigarette products. Pictured, left to right: Hergenreder (before his illness) with his brothers Cory, Noah, and Brandon

Dr Stephen Amesbury, a pulmonologist and critical care physician at Advocate Condell Medical Center who treated Hergenreder, told CNN that the teen was on the brink of death.

‘If his mom had not brought him to the hospital within the next two to three days, his breathing could have worsened to the point that he could have died if he didn’t seek medical care,’ Dr Amesbury said.

Hergenreder spent several days in the hospital before he was discharged, but doctors warned him that his lungs may not recover for weeks or even months.

‘It’s still difficult to even do normal activities, like going upstairs,’ he said. ‘I still get winded from that.’

Both Hergenreder and his family said they want to share his story to educate others on the dangers of vaping and convince them to quit.

On Monday, the Food and Drug Administration (FDA) blasted vaping company JUUL for illegally pitching its e-cigarettes as a safer alternative to smoking.

‘The law is clear that, before marketing tobacco products for reduced risk, companies must demonstrate with scientific evidence that their specific product does in fact pose less risk or is less harmful,’ said Ned Sharpless, the FDA’s acting head.

‘JUUL has ignored the law, and very concerningly, has made some of these statements in school to our nation’s youth,’ he added.

The warning letter identified several problematic statements made by a JUUL representative speaking at a school at an unspecified date, including that the product was ‘much safer than cigarettes’ and that ‘FDA would approve it any day.

Jimmy Buffett and bold surfers ride out Hurricane Florence for the 'adrenaline rush'
Crowd burst Amazing Grace at Trump rally during ten-minute long 'medical emergency'
Shutdown will NOT be lifted before New Year's Eve as the Senate sits for just 4 minutes
Video shows NYPD officer violently thrown off the back of his horse
Montana officials seize more booze from the exclusive Yellowstone Club
Man, 21, orders drink and then leaps to his death from 16-storey rooftop bar in Manhattan
Meghan Markle talks about rejecting the 'British stiff upper lip'
Nazi-themed toilet paper sells for £198