A teenager whose ‘life is hell’ after losing his entire family has left viewers heartbroken, after admitting he attempted suicide three time in 18 months.

Suicidal: In Our Words, aired on Channel 5 last night to mark World Suicide Prevention Day, featuring six men who have tried to take their own lives.

Jack, 19, from who was one of the two youngest men to take part, explained how he had ‘nothing to live for’ after losing his father at nine-years-old, his grandfather at 15 and  his grandmother shortly after.

But it was the death of his mother a year earlier, who was his ‘partner in crime’ that led to three suicide attempts prior to filming the Channel 5 show at the Riverside Centre, a specialist mental health facility.

Viewers were heartbroken by Jack’s story and praised Channel 5 for its coverage of the issue, urging Jack to ‘keep fighting and believing’. 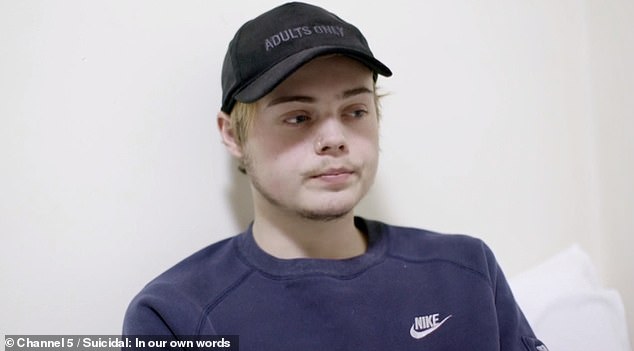 Jack, a 19 year old Londoner, tried to take his own life three times within 18 months following the death of his mother

Jack admitted he’d become a master at pretending he was ‘fine,’ as he was admitted to the Riverside Centre.

Opening up about the multiple bereavements he’d suffered, he revealed his father had died when he was nine, in a motorbike accident on his way to work.

He went on to explain the death of his grandfather when he was 14 was like ‘losing [his] dad all over again,’ as he had looked up to him as a father figure.

A few weeks later, Jack’s grandmother died from a heart attack while holding his hand during a holiday to scatter his grandfather’s ashes. 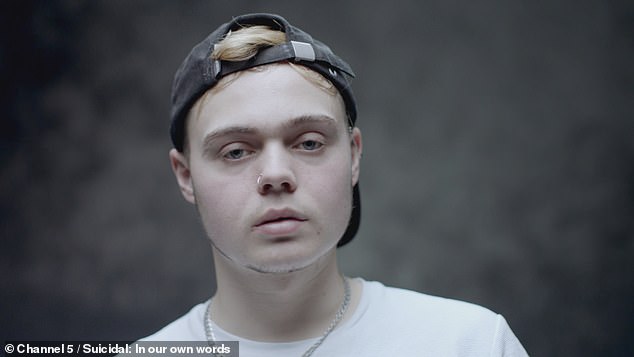 Jack, who tried to take his own life three times in the 18 months preceding the programme, said that he didn’t want to live if he’d have to battle his emotions for the rest of his life

He described this third death as ‘his whole world crashing down.’

The final blow was the death of his mother, who had been chronically ill, and whom he was closest to, calling her his ‘partner in crime’ and the most important person in his life.

‘Life is rubbish,’ he said, sitting his hospital bed. ‘Life is hell. Living is not fun, living is a battle.’

‘It’s easier to act like you’re OK than to admit you’re not,’ he added.

‘It just got too much, and I couldn’t deal with it and I just gave up,’ he said.

The young man admitted he doesn’t like that he feels like he wants to die, but ‘cannot help’ it.

‘There’s part of me obviously who wants to live. I think everyone has that in them, like naturally you want to live, I know what I want for the future and I known what I want out of life.

‘But if my life is gonna be me battling with this feeling all the time, I don’t want to live it,’ he said. 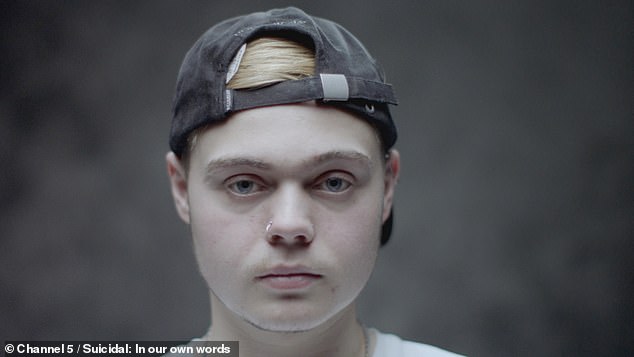 Jack said that life was ‘hell’ and that if he had to battle his suicidal thoughts, he didn’t want to live anymore

‘There’s only so much I can take of it,’ he added.

Two weeks after his suicide attempt, Jack was taken off the ward, and was judged ‘well enough’ to go stay with friends.

Jack’s tragic story left viewers moved, with one tweeting: ‘He’s 19 and feels like he’s got nothing and nowhere to turn. He should be having the time of his life. It’s so, so awful. Poor kid, I do hope he gets better.’

‘Jack, if you’re reading this, you MATTER. I care. So many of us care. You are not alone and you will come through this. Keep fighting, keep believing. You have so much life ahead of you. I would have a coffee and chat with you any time. Big hugs,’ one said. 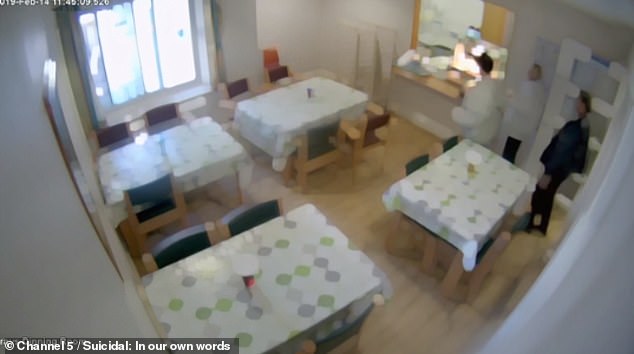 Jack was staying at a specialised facility following a suicide attempt. The NHS building welcomed men who have tried to take their own lives or experienced suicidal thoughts 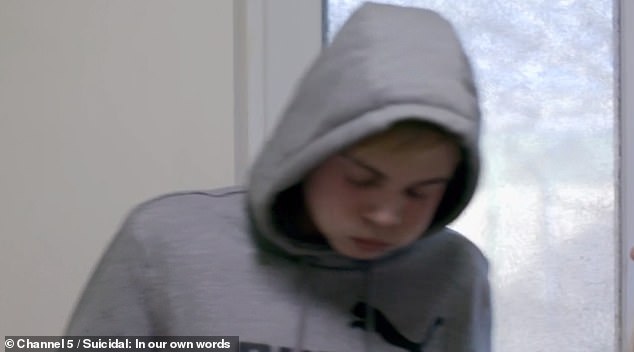 Jack stayed at the centre for two weeks, trying to cope with his emotions. He explained he felt defeated and weak 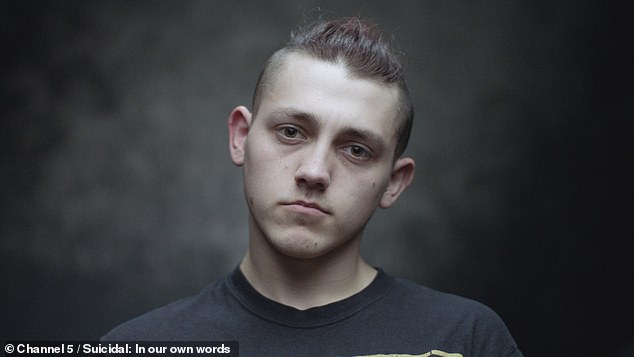 Charlie, 19, was admitted on suicidal watch after trying to harm himself several time. He explained in an audio recording to a helpline that he ‘can’t do this anymore’

The raw documentary kicked off with an emotional recording of Charlie’s mother reaching out to a helpline for help as her son experiences a breakdown.

‘I have a son who suffers from mental health. He’s a self-harmer,’ she explained, adding: ‘he’s tried committing suicide a couple of times.’

‘He’s gone out today and drunk lots of alcohol and now he wants to go out and harm himself.

‘He’s punching his head and saying he doesn’t know what’s going on there,’ the mother continued.

Eventually, the helpline worker spoke to Charlie himself, who was having a breakdown, and whose speech was intelligible.

Following this distressing phone call, Charlie was admitted at the Riverside Centre, and put on 24-hour suicide watch.

Charlie would remain under supervision for the whole duration of his stay in the facility, as a specialist explained the first hours after serious suicidal thoughts are crucial.

‘The riskiest time to treat those who have suicidal thoughts is the first weeks of treatment,’ explained Dr Osode, specialist doctor in psychiatry 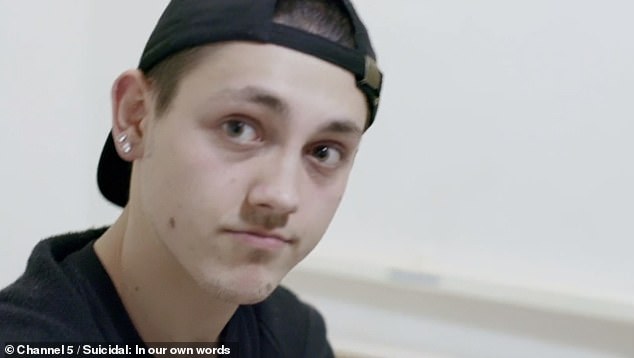 ‘I was diagnosed with emotional dis-regulation, social anxiety, depression and ADHD,’ Charlie explained.

‘It made me feel like I was the odd one out. Every one have their bad days, but everyday was my bad day,’ he went on.

‘I’m just thinking how I’m still here, it baffles me,’ he said, ‘I thought it would have worked the first time.’

‘I know it’s painful to die, but can’t I just fall asleep and not wake up,’ he added.

For confidential support in the UK call the Samaritans on 116123, visit a local Samaritans branch or click for details

The Bachelor's Dasha and Emily spotted in Sydney ahead of finale week
Interview with teetotal vegan influencer is ridiculed
Children left 'crying' after horror film trailers are shown before a cinema screening of Peppa Pig
The £2,718 hotel bill that Haile Gebrselassie's staff says Mo Farah STILL has to pay
Counter-terror chief Neil Basu says British Muslims should not be forced to 'assimilate'
Graphic designer, 19, killed by at least three vehicles had drunk alcohol and taken ecstasy
Andrea Leadsom puts on a VERY colourful display in a £1247 Burberry coat
How did they get away with it?