Joel Dommett and Hannah Cooper were the picture of love as their close pal Iain Stirling officiated their Mykonos wedding on Monday.

In a series of snaps posted to their Instagram accounts on Wednesday, the comedian, 33, and the model appeared in great spirits as they exchanged their vows in a ‘perfect’ ceremony led by the Love Island voiceover artist, 31.

Following their romantic nuptials, the husband and wife reveled in newlywed bliss as they partied on a boat with their nearest and dearest.

Alongside a radiant snap of the pair holding hands at the altar, the I’m A Celeb star expressed his appreciation towards his Scottish friend Iain.

Joel wrote in the image caption: ‘A huge thank you to @iaindoesjokes for officiating the ceremony. You made it perfect.. and a little like I was on Love Island.’

Posting the identical image to her account, blonde beauty Hannah penned: ‘Thank you for being the most perfect combination of funny, serious and compassionate…

‘To both @joeldommett and @iaindoesjokes that is. (possibly the only photo of me not crying my eyes out).’ 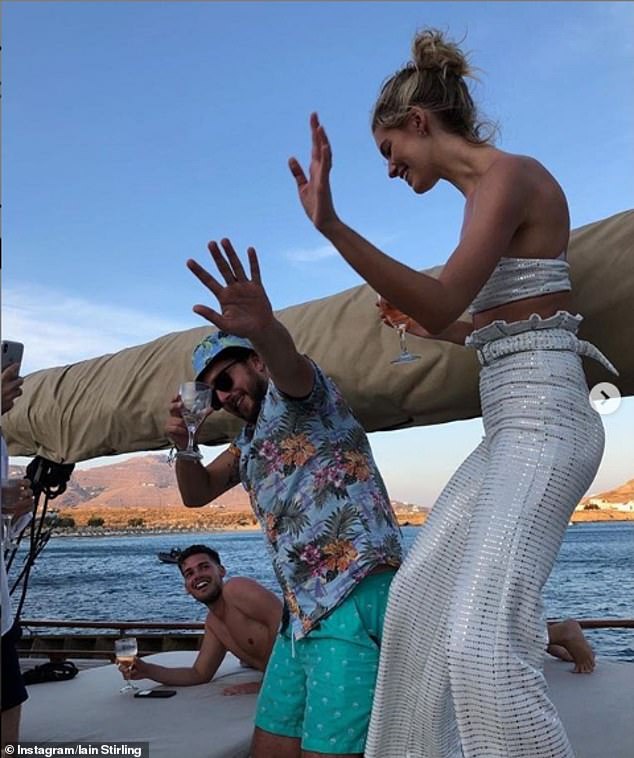 Letting loose: Joel Dommett, 33, and Hannah Cooper were the picture of love as their Iain Stirling (pictured), 31, officiated their Mykonos wedding on Monday, before a boat party 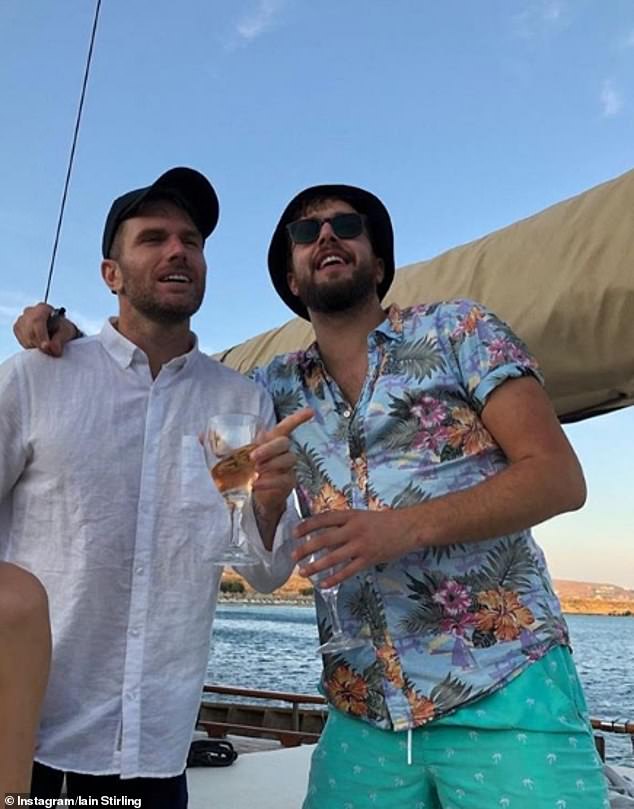 Letting loose: Following the emotional ceremony, the couple knocked back glasses of wine as they let their hair down with their close friends and family during a boat ride

Following the emotional ceremony, the couple knocked back glasses of wine as they let their hair down with their close friends and family during a boat ride – treating the pair to a scenic glimpse at the idyllic Greek island.

A sneak peek inside the fun-filled bash was shared onto CelebAbility star Iain’s Instagram, paired with the caption: ‘The Bride and Groom.’

Hannah switched out of her stunning gown and into a bedazzled white bralet and matching trousers, while Joel sported a dress shirt and a baseball cap. 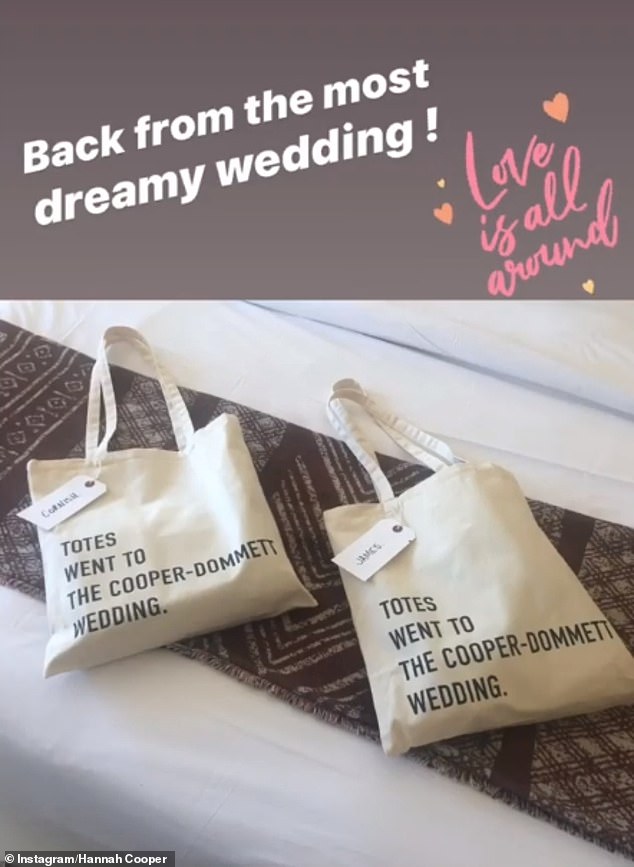 ‘TOTES WENT TO THE COOPER-DOMMETT WEDDING’: The newlyweds, who have since returned to the UK following their destination wedding, were treated to personalised bags

On Tuesday, the pair shared their first snap from their wedding, with Hannah looking gorgeous in a lacy off-the-shoulder bridal gown, with a semi-sheer skirt that revealed her honed legs.

Her tresses were styled in soft waves while her pretty features were enhanced with a rich palette of make-up.

Joel looked dapper in a dove grey t-shirt and navy suit, paired with practical box fresh trainers as he walked his new wife up the beach and took in the scenic sea views.

A shower of confetti covered the newlyweds as they walked along, with a wooden canopy – where the couple said their vows – visible in the background. 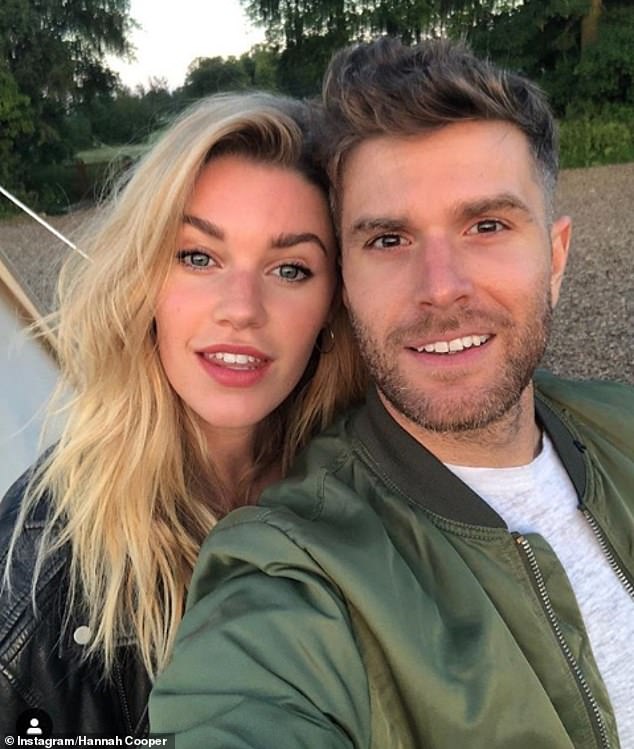 Gorgeous: The I’m A Celeb star announced the happy news on Instagram on Tuesday, sharing the first joyous photo of the couple’s beach wedding 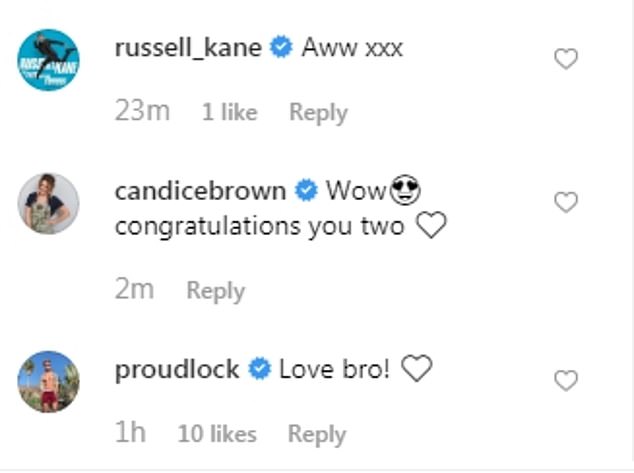 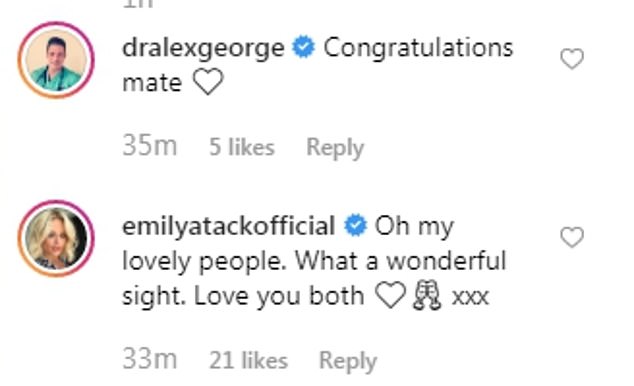 A smitten Joel wrote: ‘BEST DAY EVER. Love you’ while Hannah shared the same snap with the caption ‘My heart’.

Earlier this week Joe took to Instagram to confirm it was indeed his ‘wedding week’ as he posted a snap with his bride-to-be in matching white swimwear.

Joel and Hannah announced their engagement in December 2017 after a year of dating, and in May of this year the couple tearfully confirmed that they had purchased their first house together.

In his post, Hannah displayed her bronzed physique in the revealing white two-piece, as her husband-to-be put on a shirtless display in barely-there white Speedos. 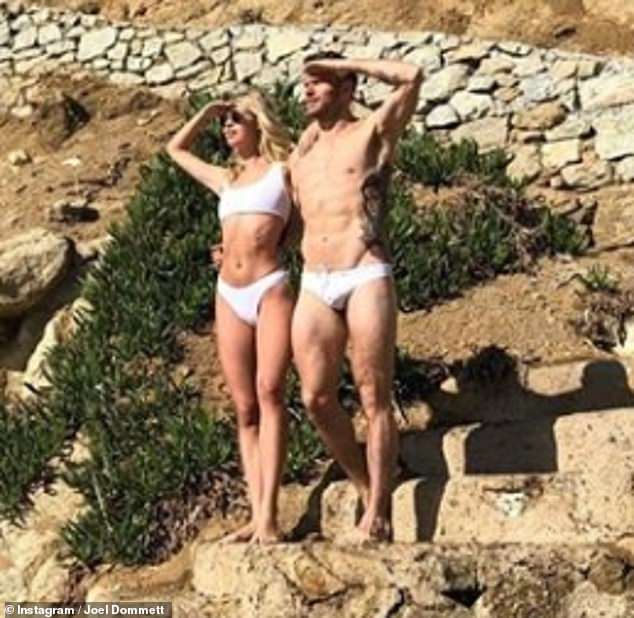 Almost there! Earlier this week Joe took to Instagram to confirm it was indeed his ‘wedding week’ as he posted a snap with his bride-to-be in matching white swimwear

He captioned the post: ‘It’s WEDDING WEEK. Cant wait to share bikini bottoms for the rest of our lives together @hannah_cooper.’

Hannah also seemed to be getting into the wedding spirit as she sported a white biker jacket and matching skinny jeans for another snap.

The stunning Mykonos backdrop could be seen in the post, which Joel simple captioned with the phrase ‘Wedding Week.’ 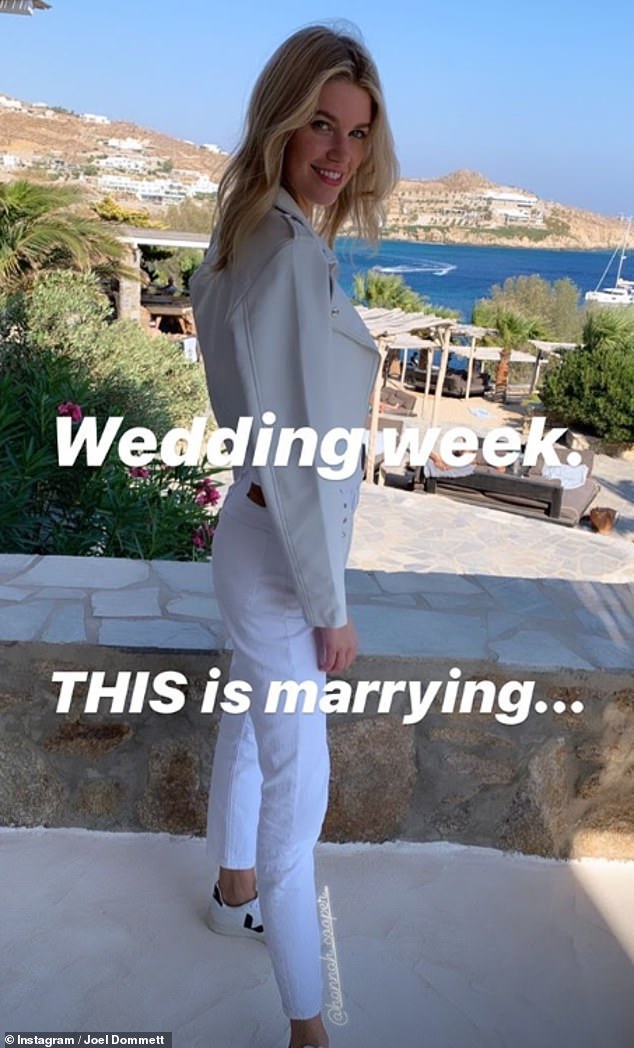 Gorgeous: The comedian also shared a snap of his bride-to-be in another all-white look as they prepare to tie the knot in the Greek sunshine 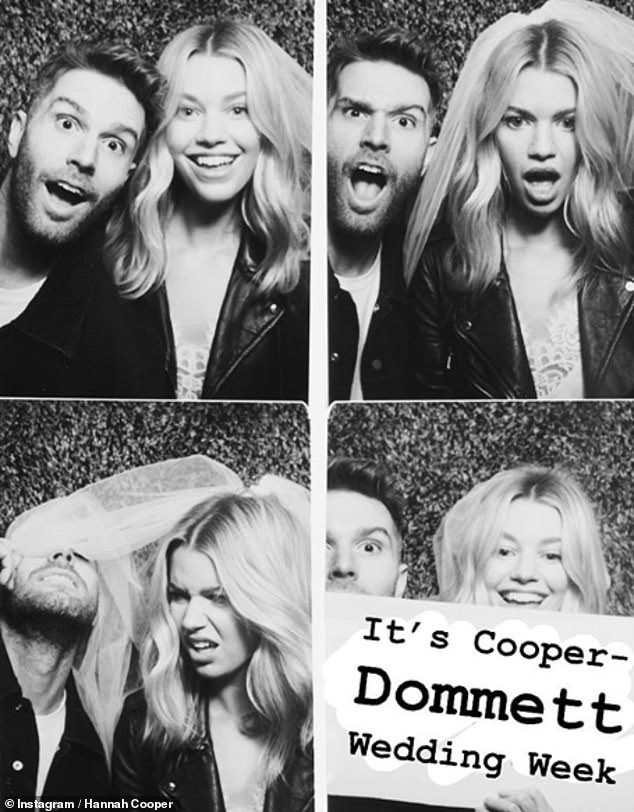 Giddy: Hannah shared a fun gallery of snaps with Joel, as she also revealed to her followers it was the week of her wedding

Hannah herself also took to Instagram to share a sweet collection of wedding-style snaps, along with the caption: ‘It’s Cooper-Dommett wedding week.’

The couple had been tight-lipped about their wedding plans, although Joel previously stated that it would be a relatively small and intimate affair.

It also comes three months after Joel and Hannah bought their first house together, with the comic sharing a delighted snap of the moment they received the keys. 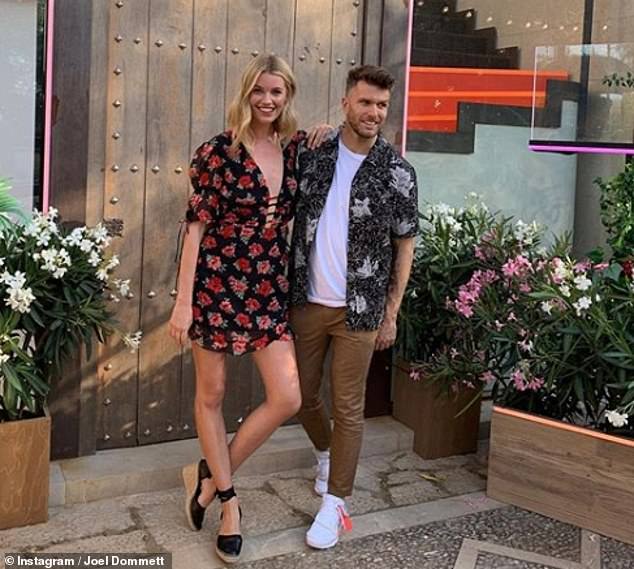 Exciting: Joel and Hannah announced their engagement in December 2017 after a year of dating,

Hannah was also seen incredibly teary-eyed in a clip, as he reminisced about proposing to her in their flat.

Panning the camera to Hannah as she was overcome with emotion, Joel stated: ‘We’re leaving this flat. I got engaged to you in this flat. Five years. Two of which I was with you.’

Hannah added: ‘We’re onto a big adult house now’, before Joel stated: ‘We’re going to be real adults. Love you.’

He captioned the video: ‘It’s been the most emotional day but we did it. 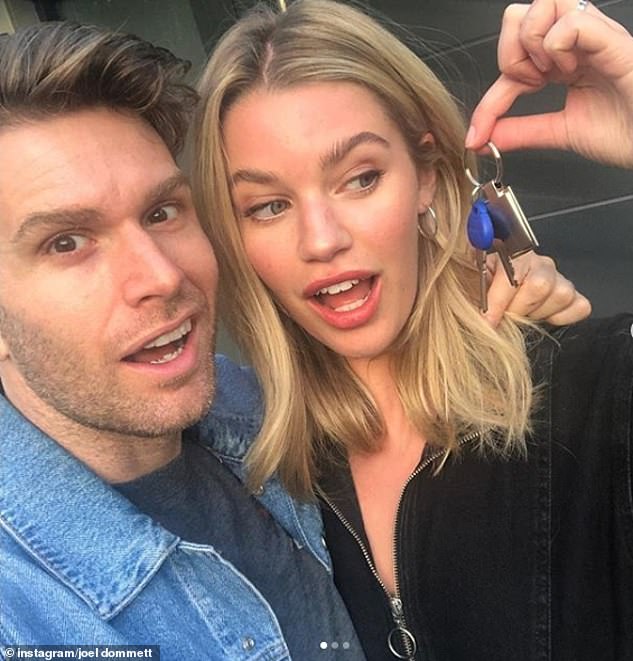 Got the keys: In May Joel and Hannah also confirmed that they had purchased their first house together

Joel announced his engagement to the model last year.

On an episode of Loose Women last year, Joel revealed it was more love at first screen than sight, as he met the gorgeous blonde model on Instagram.

He admitted it was a rocky road before he finally found The One, and it took an exchange of emojis to spark the beginnings of his and Hannah’s relationship.

Joel divulged: ‘She sent me an emoji with a cat with the heart eyes, and that was it.’

‘I’ve been burned online with relationships before, but we met up and got on really well and went on a super first date. Now on every anniversary we replicate our first date.’

The I’m A Celebrity star left fans’ hearts melting with his romantic proposal, which required the help of plenty of candles and the final page of his book It’s Not Me It’s Them.

Joel said he gave Hannah a copy of the book with the final page ripped out, ready to pop the question when she finally reached the end.

He said: ‘I gave her the first version of the book, and got her to read the whole book but ripped out the final page. She asked ”why did you rip it out” and I got down on one knee.’

‘I lit 200 candles and wore a tuxedo, and learned how hot a small London flat can get with that many candles.

‘But she was like ‘I’m in a Rod Stewart t-shirt’ and then she said yes.’ 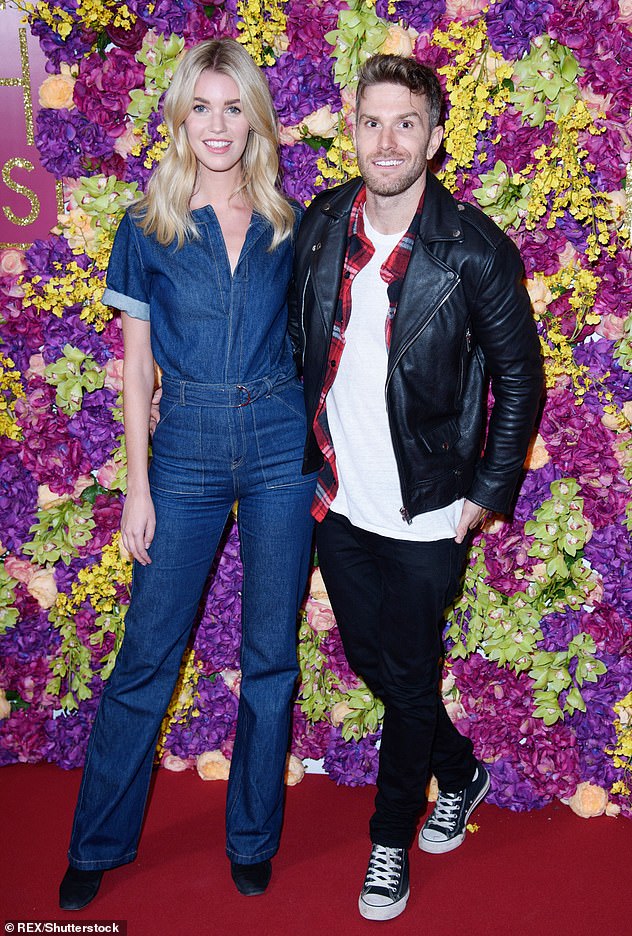 Hot couple: On an episode of Loose Women last year, Joel revealed it was more love at first screen than sight, as he met the gorgeous blonde model on Instagram