Forces have said the first aid kits, torches, water and mobile phone chargers should be close to hand whenever you venture out of your home.

It was met with bemusement as some said the suggestion was more suitable for a country facing martial law as opposed to the UK. 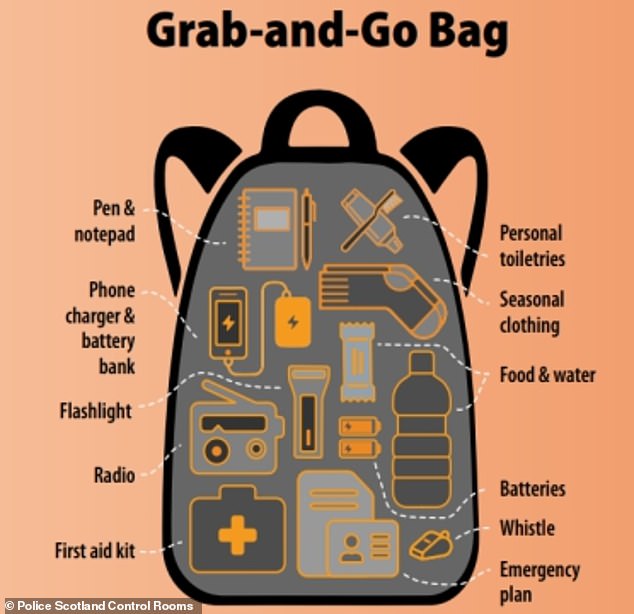 Other items included in the suggested pack are a pen, notepad, toiletries, battery bank, seasonal clothing, radio batteries and a whistle.

The scale of the bundle seems to vary from force to force, with fire brigades also sharing the recommendation.

Some have suggested throwing in nappies, foot, toys and prescription medicine just in case.

The suggestions were met mockery on Twitter, where an account bearing the name Pointless Letters accused police of fear-mongering. 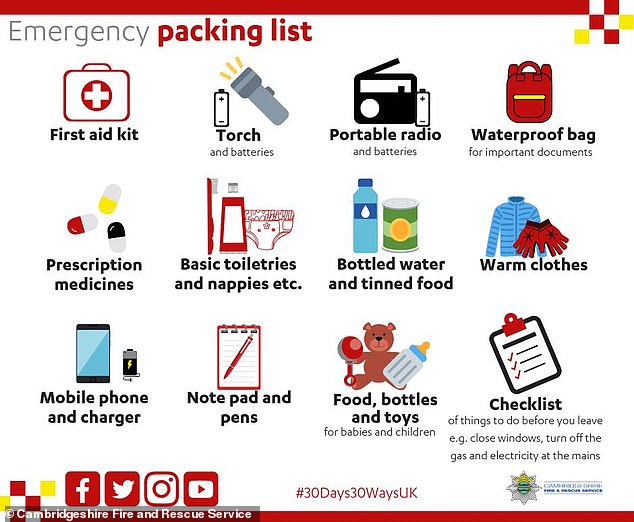 Cambridgeshire Fire and Rescue shared this graphic, showing an array of items it believes people would be well-advised to carry with them

Its post read: ‘In these unsettled times, it’s good to know that the police are always on hand to remind us that we should be in a permanent state of fear and borderline terror about the sword of Damocles hanging over all our heads. FEEL IT FEEL THE FEAR FEEL IIIIIIIT.’

Others wondered whether the government was taking cues from Homeland Security in the US amid floods that have blighted the country.

One woman tweeted: ‘This is an initiative from the USA’s Dept of Homeland Security. Why are you promoting it? Has this directive come from UK/Sco Govt?!’

MailOnline has approached Police Scotland and Cambridgeshire Fire and Rescue Service for comment, but it is not yet known why they are recommended the grab bags be carried.