A photographer was rewarded with a rare pink rainbow after he had woken up early to capture the vivid sunrise.

Sinclair Cunningham, 43, was out in the countryside in Fife, Scotland, on Tuesday morning looking to snap a striking pink sunrise – and was gobsmacked when he saw the array of colours in the sky.

In eight years of taking pictures, the self-employed photographer had never seen a pink rainbow, which tends to occur either during sunrise or sunset. 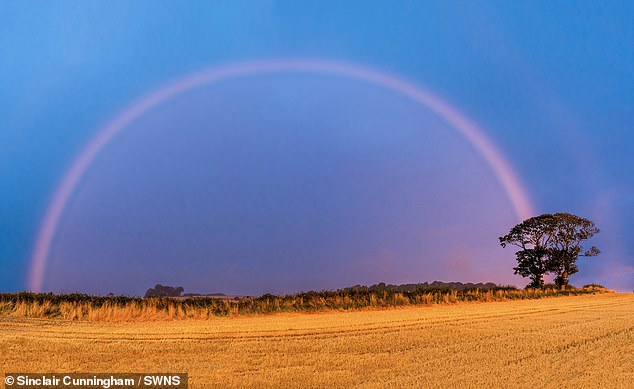 Sinclair Cunningham, 43, was out in the countryside on Tuesday morning looking to snap a striking pink sunrise – and was gobsmacked when he saw the array of colours in the sky

The amazing illusion appeared in the sky at 6am near the ‘Kissing Trees’ in Kinghorn, Fife.

Sinclair said: ‘I turned round and saw the pink rainbow and just got into position to capture it with the Kissing Trees in the shot and the rainbow dipping down into it.

‘It was kind of a perfect storm for the conditions.

‘There was the sunrise in front of me and the rain behind me.

‘It was just a perfect kind of blue sky behind the rainbow with pink on the other side.’

Sinclair has been photographing landscapes for eight years and is thinking of including the shot in a calendar which he puts together every year. 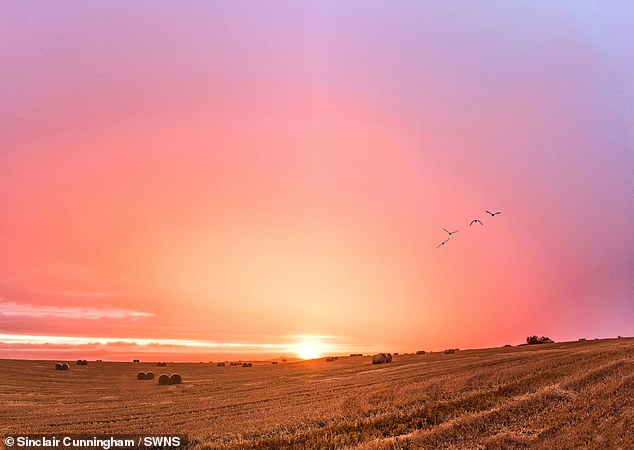 However, despite regularly going out to shoot landscapes, it was the first time he had ever seen a pink rainbow.

Sinclair said: ‘I do landscapes all the time but also do portraits and weddings.

‘I make a calendar every year as well.

‘I might include the pink rainbow shot in it.

‘Kinghorn is good for photographic opportunities.

‘I’d never seen a pink rainbow before though.’

Sinclair, who completed a photography course at Fife College last year, added: ‘That’s what struck me, I knew there was something funny about it and just had to photograph it.

‘You just get the feeling that you’ve got a good shot.

‘I was pretty happy with it.’

WHAT ARE ‘PINK RAINBOWS’?

Like their regular counterparts, ‘pink’ rainbows are caused by the reflection, bending and spreading out of light.

They are created when light passes through water droplets.

This is why rainbows are often seen when the sun comes out after rain, or in the sprays from waterfalls.

From the ground they appear as arcs, but can be seen as a full circle from the air — such as in an aeroplane.

‘Pink’ rainbows, however, are only seen at sunrise and sunset — times at which the sun appears low in the sky.

As a result, sunlight has to travel a greater distance through the atmosphere to reach the ground.

Red light waves are scattered less as they pass through air — which is why the sun looks red at sunrise or sunset.

Similarly, only red wavelengths are available to form rainbows at these times of the day.

This forms so-called ‘pink’ — or monochrome — rainbows in the sky.

Ilana Glazer's event at synagogue canceled over anti-Semitic graffiti
Everton boss Marco Silva hails best performance of the...
Republicans to EXPAND their Senate majority as red state Dems Donnelly, Heitkamp and McCaskill fall
Young women having cheap fillers don’t realise they can lead to blindness and even a stroke
Kim Kardashian goes back to the White House to make a speech about criminal justice alongside Trump
One in six families is stockpiling food for Brexit with young people much more worried than the old
Prince Harry and Meghan Markle decline NSW RFS offer to name firefighting plane after son Archie
Coronavirus Europe: Nearly half of deaths were in care homes