Hundreds of angry pro and anti-Brexit protesters have clashed outside Parliament today as the UK political system approaches a state of paralysis.

Police on horseback intervened to separate 200 members of the Democratic Football Lads Alliance from EU-supporters March for Change after the Brexiteers chanted at them and then threw a beer can on Parliament Square, Westminster.

Hundreds of demonstrators also gathered outside 10 Downing Street and called on prime minister Boris Johnson to resign, in another day of chaos at the heart of the UK government.

MP Anna Soubry also refused to speak at a rally in Parlimanet Square earlier today after saying she was ‘too frightened’. In January she was called a nazi, traitor and fascist by two men, who support Brexit. Both were handed suspended jail sentences for their actions. 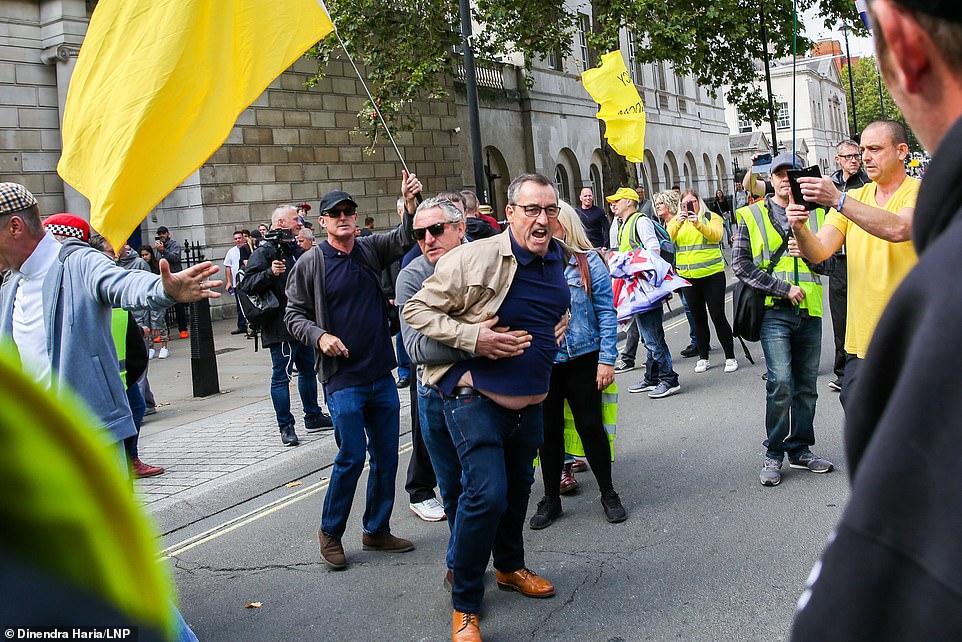 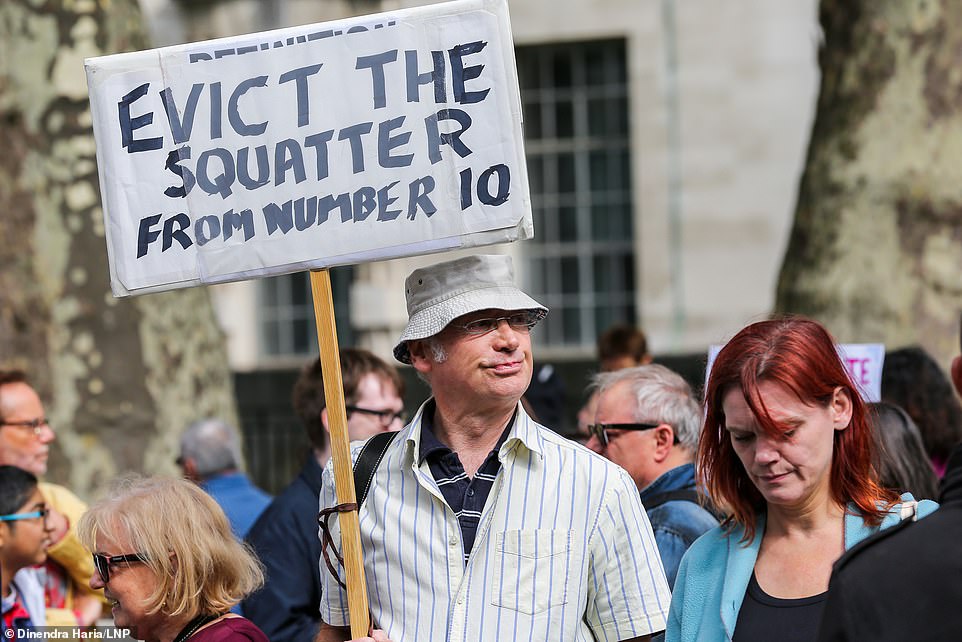 Enraged protesters have also gathered outside 10 Downing Street to call on Boris Johnson to resign. (Pictured: Anti-Brexit protester outside Whitehall today holding a placard that reads ‘evict the squatter from Number 10’) 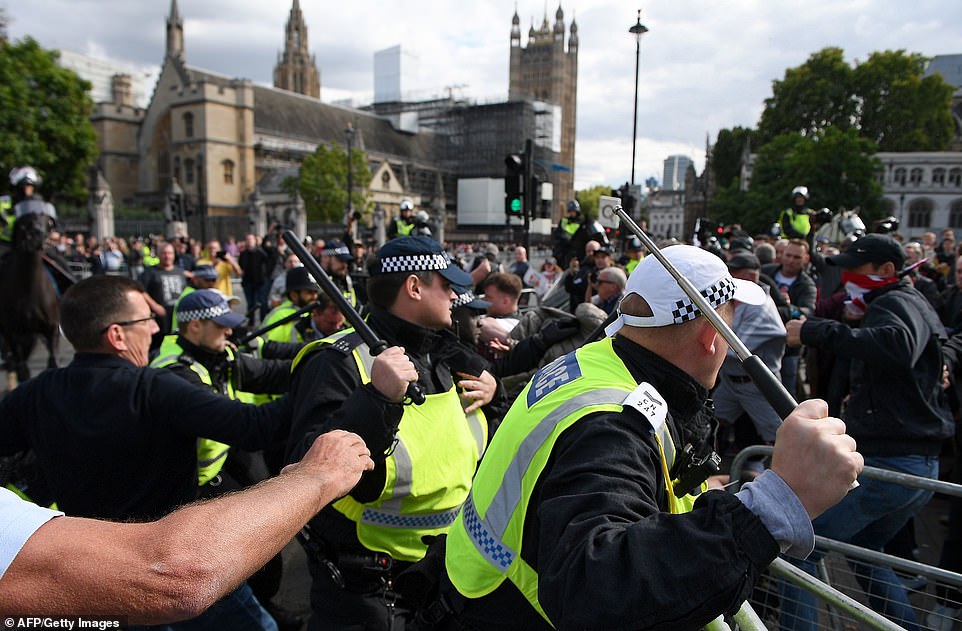 As police officers moved in to separate the crowds, some were also forced to raise their truncheons to get protesters to go backwards. Officers on horseback (far left) have also been used to help control the crowds 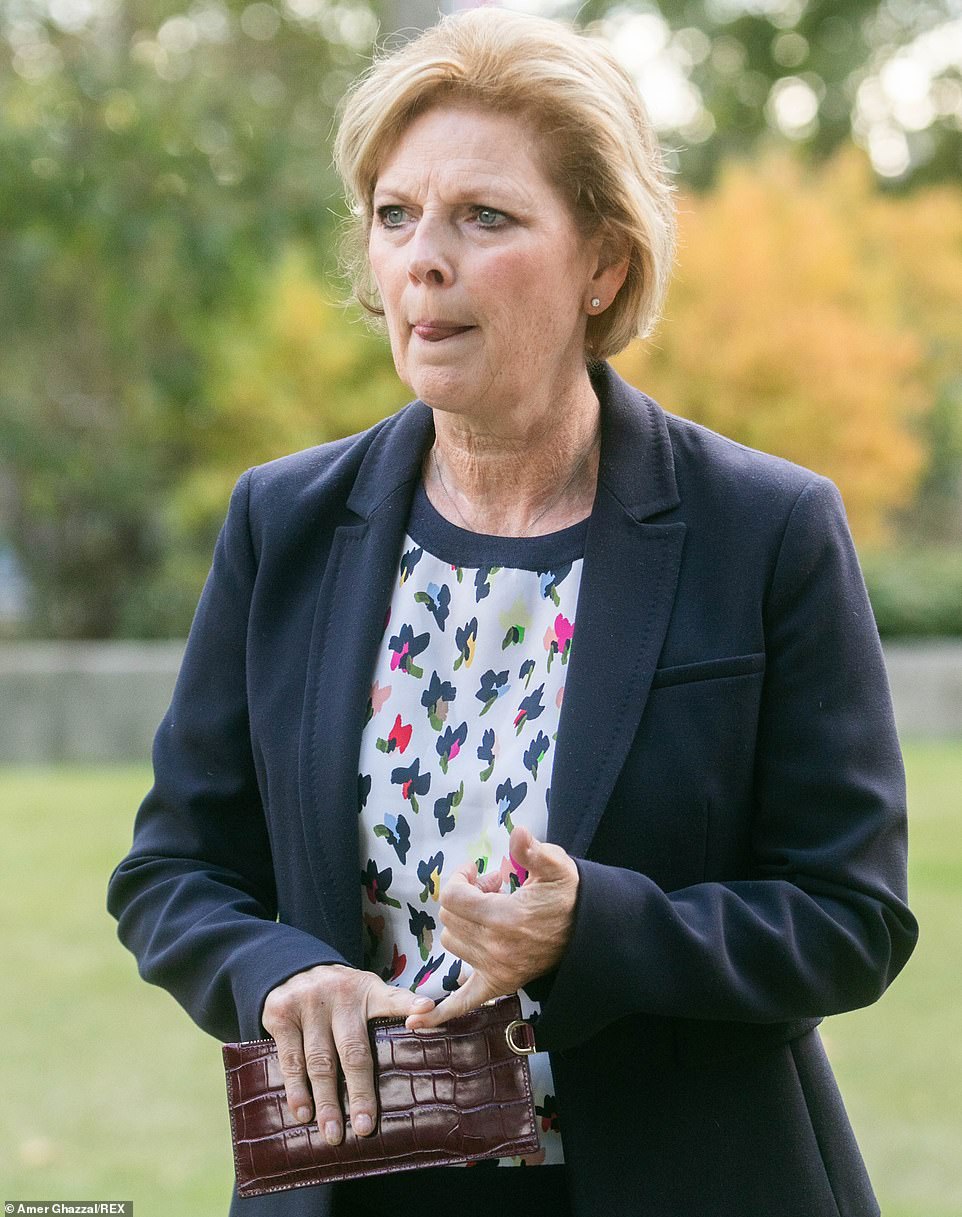 MP Anna Soubry left Parliament Square earlier, where she was meant to speak at a rally, after telling officers that she was ‘too frightened’. In January she was called a nazi, traitor and fascist by two men who supported Brexit. Both received suspended jail sentences for their actions after being convicted of causing harassment, alarm or distress. (Pictured: Anna Soubry walking through Westminster on Thursday this week) 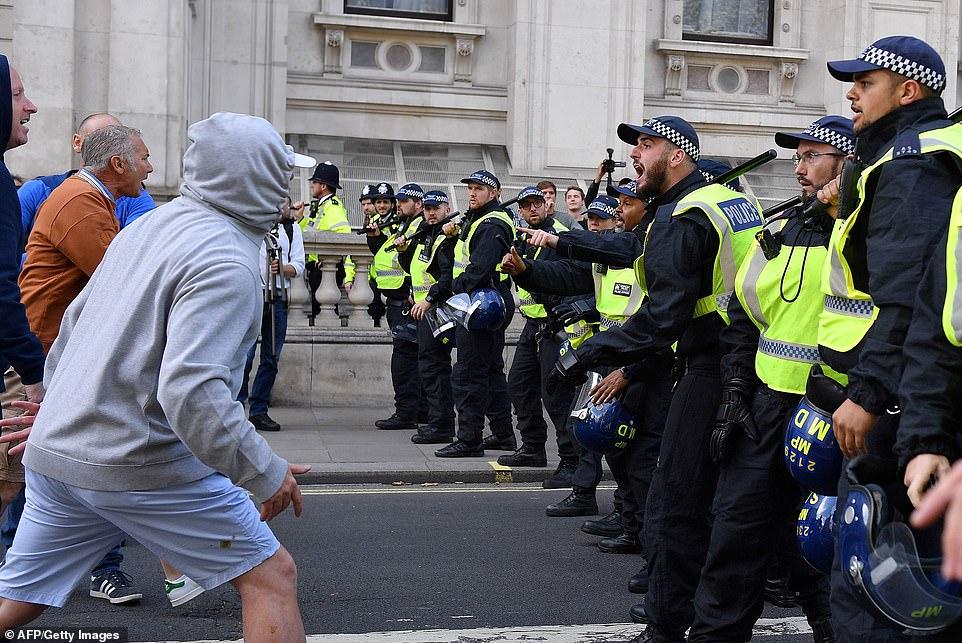 Brexit supporters have also been accused of throwing eggs at anti-Brexit demonstrators. (Pictured: A line of officers tells demonstrators calling for Boris Johnson to resign to ‘get back’ in Whitehall today)

Shocking images from Westminster show Brexit supporters brandishing flags and chanting outside parliament, while one was also seen with a bloodied nose.

Anti-Brexit protesters were also shown waving signs calling for Brexit to be stopped and Boris Johnson to resign.

Police officers formed lines to separate the two groups, and even raised their truncheons to stop clashes at the political centre of the UK.

Shocked by the scenes Ms Soubry, leader of the Independent Group for Change, said she was scared to speak due to the ‘intimidation’ from other protesters.

‘It’s awful but there’s also a side of me that thinks that this is our country.

‘I’m a parliamentarian and I have a right to speak and I shouldn’t be frightened but it’s very, very, very disturbing, and I’m very frightened actually.’ 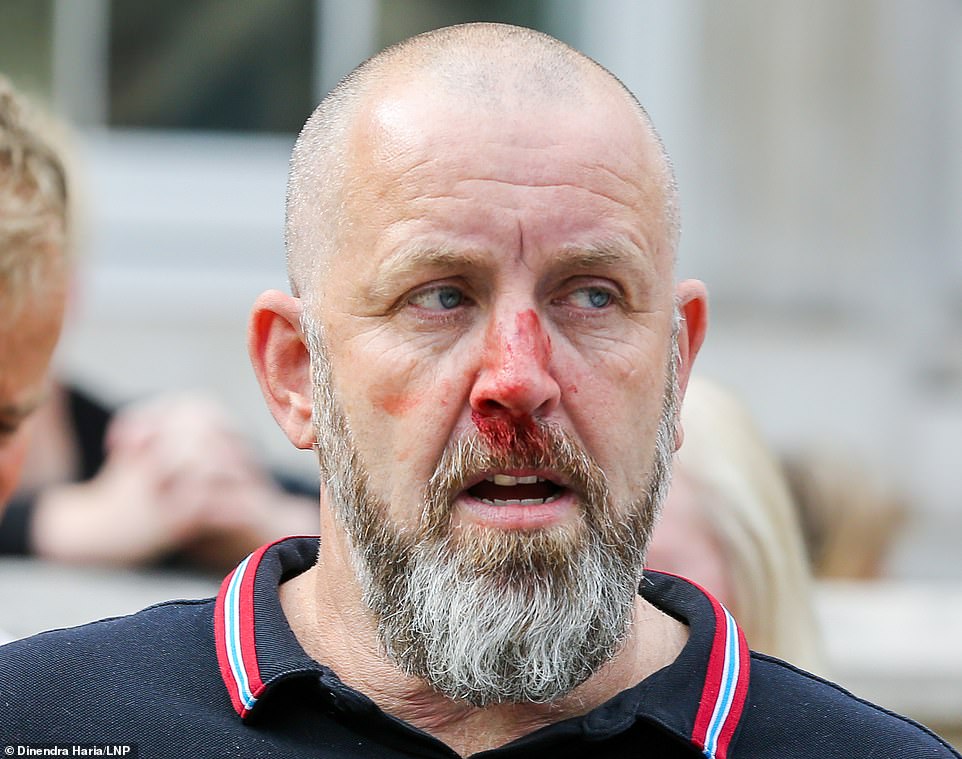 Police officers formed lines to separate enraged pro and anti-Brexit protesters as the UK political system faces paralysis over the Brexit impasse. A Brexit supporter was also pictured with a bloodied nose outside parliament today 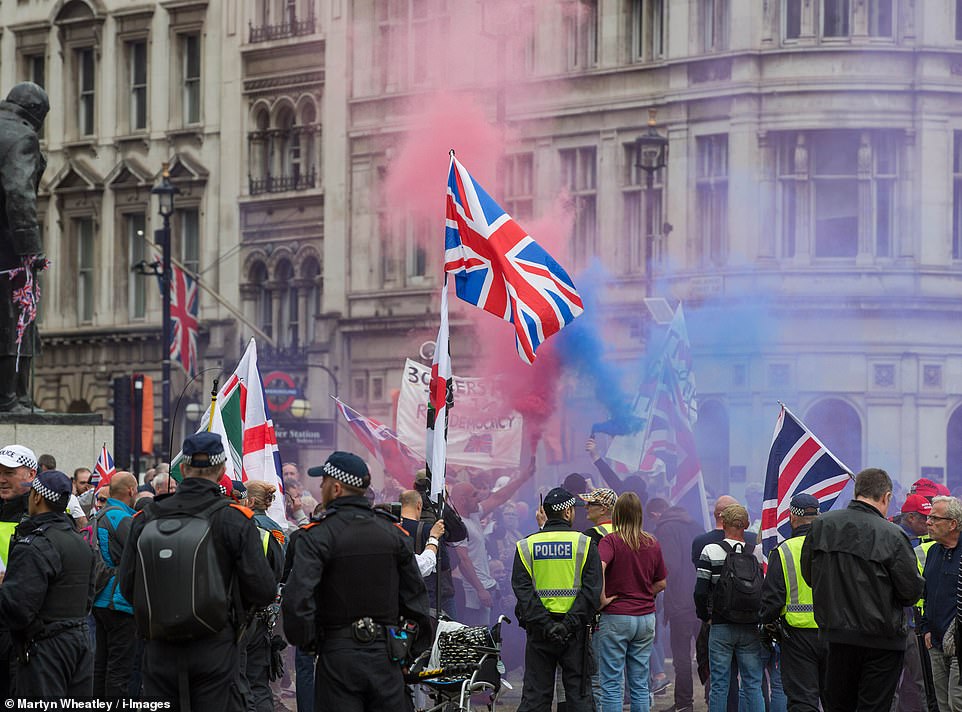 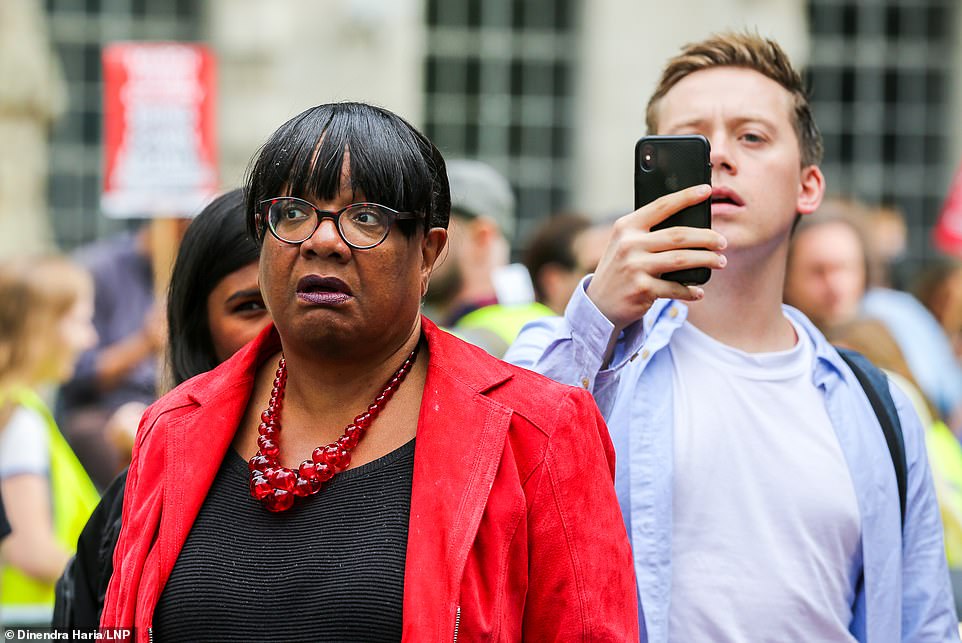 Shadow Home Secretary Diane Abbot and left-wing activist Owen Jones also joined demonstrators outside parliament today. Labour has said it will block a general election until they are guaranteed that the government will not enact a no-deal Brexit 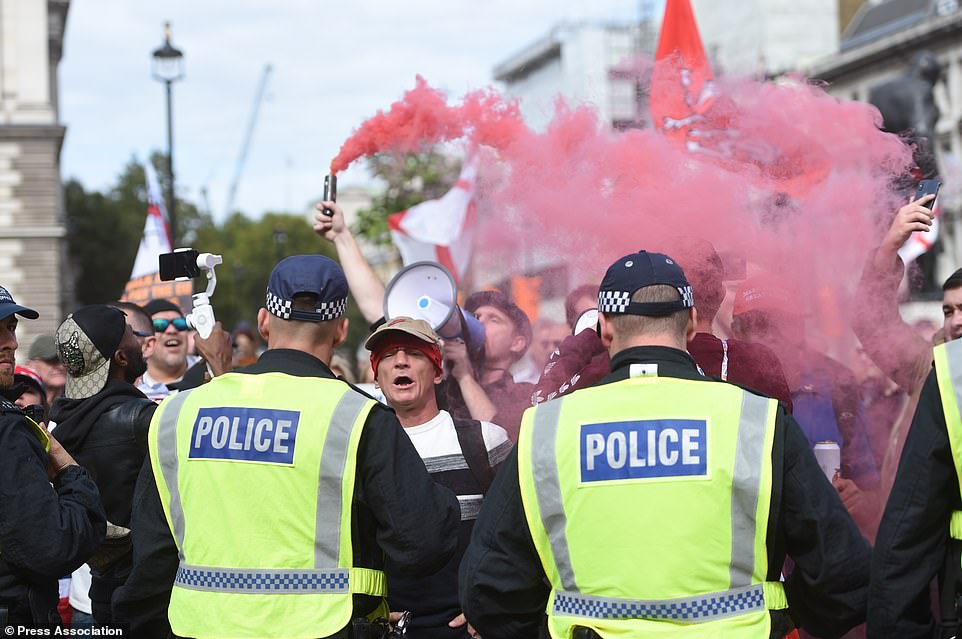 Protesters were held back by police officers outside parliament earlier today. They let off flares and waved England flags 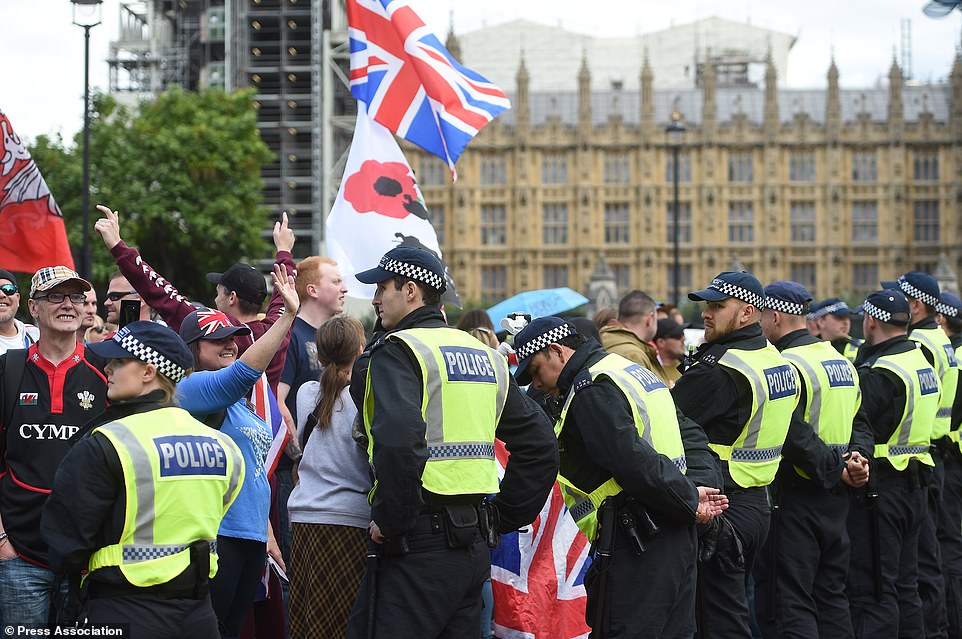 MP Anna Soubry left Parliament Square, where she was meant to speak today, after saying she was ‘intimidated’ by the crowds. (Pictured: Protesters angrily waving flags and chanting outside Westminster as they are held off by police officers)

After speaking to officers, Ms Soubry left the rally and said she did not want to cause additional issues for them as they policed both events.

The MP for Broxtowe, Nottinghamshire, was called a nazi by pro-Brexit demonstrators James Goddard, 30, and Brian Phillips, 55, outside Parliament in January this year.

March for Change organisers said they had cancelled plans to float a Boris Johnson-shaped ‘blimp’ due to the likelihood it would become a target.

Tom Brufatto, a director of the March for Change, said protesters were there to ‘demonstrate peacefully and defend our democracy’.

Organised by groups including Another Europe is Possible, Momentum and the Green Party, the Demand Democracy: Johnson Out protesters said the Prime Minister was ‘attacking democracy’.

A human barricade of police was formed after a small group of pro-Brexit protesters started attacking police officers.

The march was eventually allowed to start, surrounded by a heavy police presence, occasionally pausing in a tense stand-off with counter-protesters. 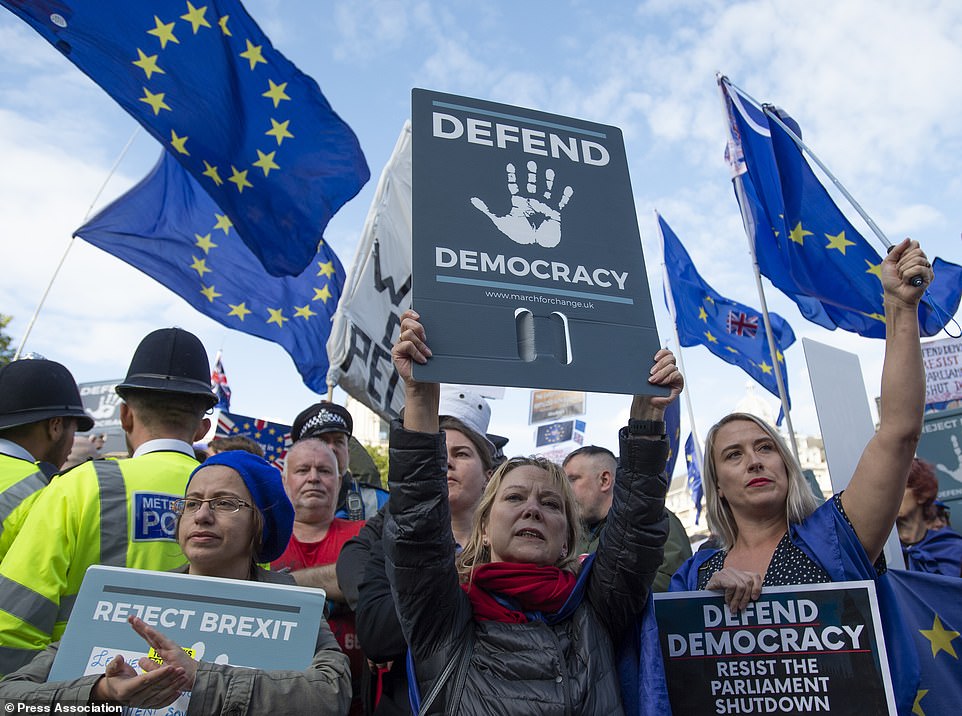 Anti-Brexit protesters also brandished EU flags and called on the government to ‘defend democracy’. They also demanded that MPs ‘resist the government shutdown’ outside parliament today 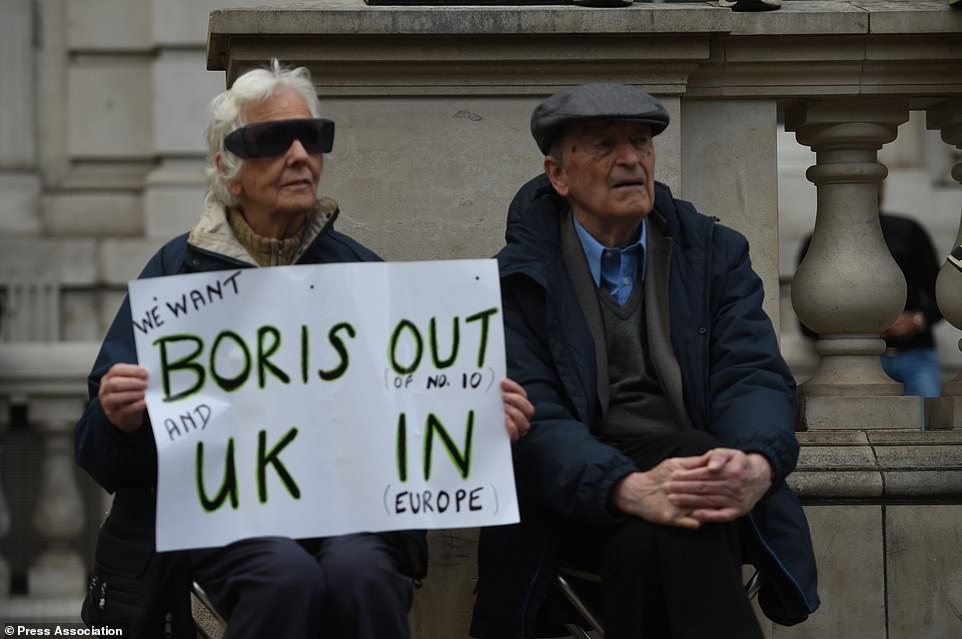 Marchers chanted ‘fascist scum off our street’ and ‘refugees welcome’.

Ms Berry also addressed the rally in Parliament Square and praised the work of opposition MPs for proposing and passing a Bill to prevent a no-deal Brexit prior to the suspension of Parliament.

Addressing the pro-Brexit protesters on the other side of the square, she said: ‘That’s why they’re here today, they know they’re losing.’

Rows of police, including officers on horseback, stood between the two groups of pro and anti-Brexit protesters.

Some members of the protest organised by the DFLA were seen throwing eggs at people filming them.

He said: ‘Every day that passes that we remain in the European Union is a victory to our movement.

‘While some call us traitors, we are not the ones trying to break up this country and turn it into an English, white nationalist country, they are.

‘We are not the ones destroying the rights of migrants, they are. Just like all things, good will triumph over evil and Brexit is evil.’

The MP also accused Leave-supporting politicians, including Jacob Rees-Mogg, of aspiring to turn the UK into a ‘nasty feudalistic country’.

Speaking about the possibility Parliament will be suspended next week, he added: ‘We MPs will continue to sit in Parliament and we ask you to set up a community People’s Parliament across the country.’