An Autumn chill is set to fall over the UK this weekend with heavy rain expected Monday before tropical weather from Hurricane Dorian arrives on our shores in the middle of next week as a bout of wet and windy weather.

Despite the odd shower across the UK today the sun is still expected to make an appearance through the clouds, with a pleasantly warm temperature reaching highs of 60F (16C) this evening in Wales and the South West of England.

However this will quickly drop off through the night and into tomorrow as temperatures continue to fall to lows of 42F (6C) overnight due to areas of high pressure from the south clearing cloud cover. 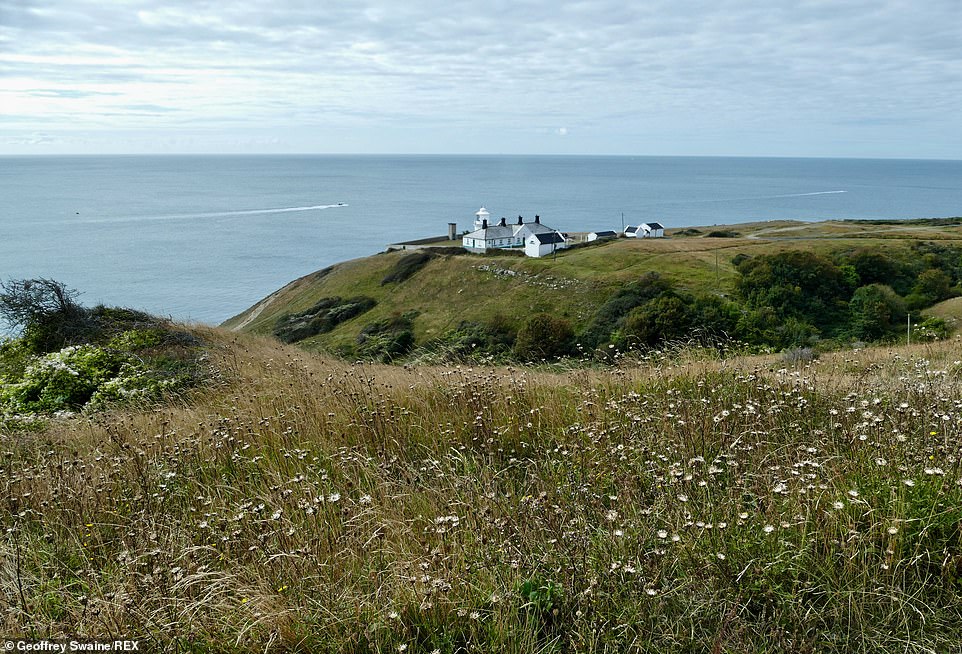 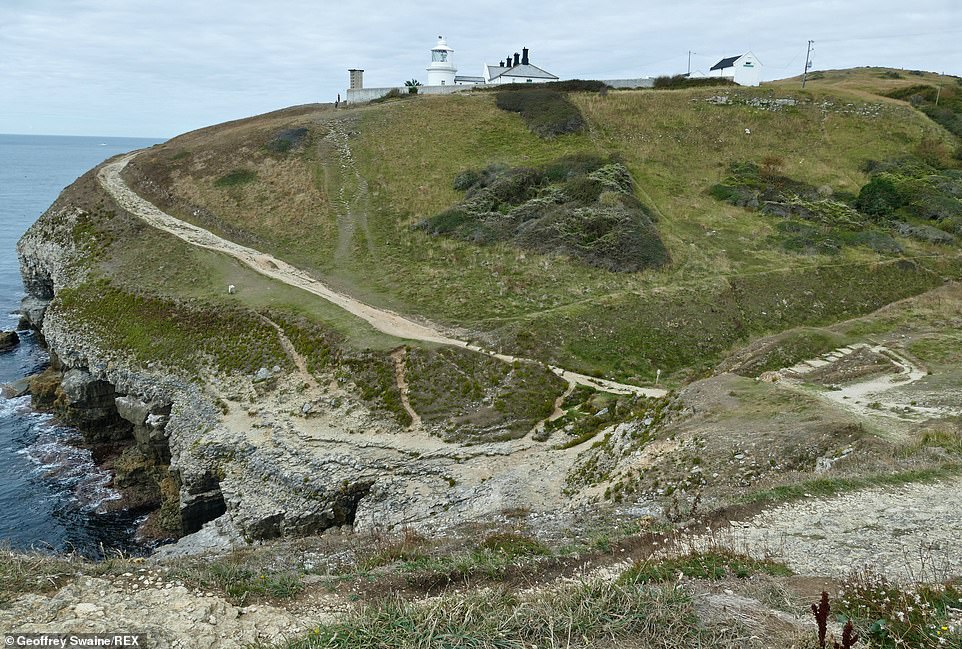 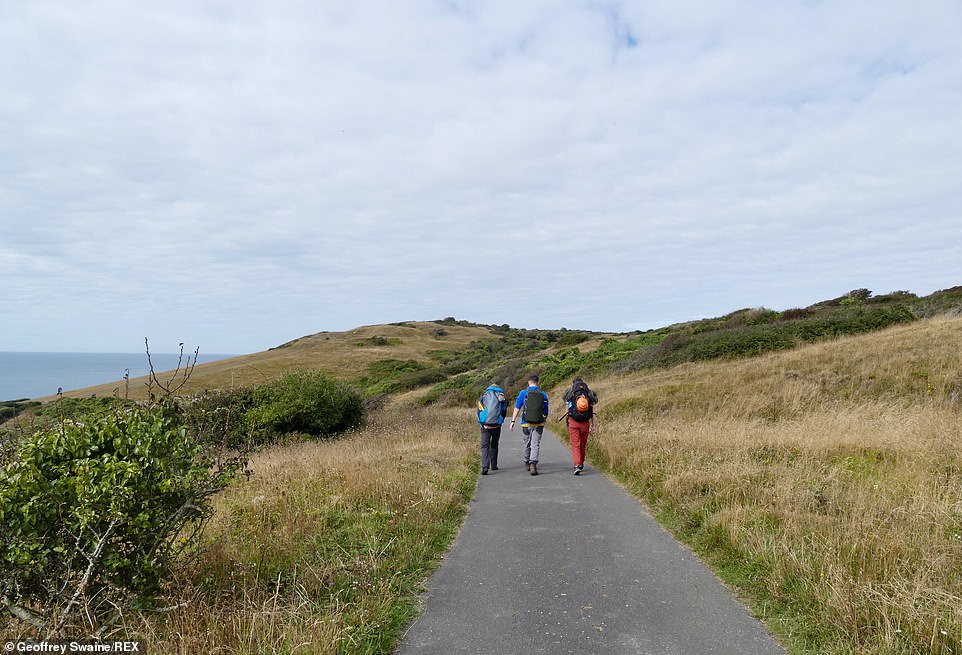 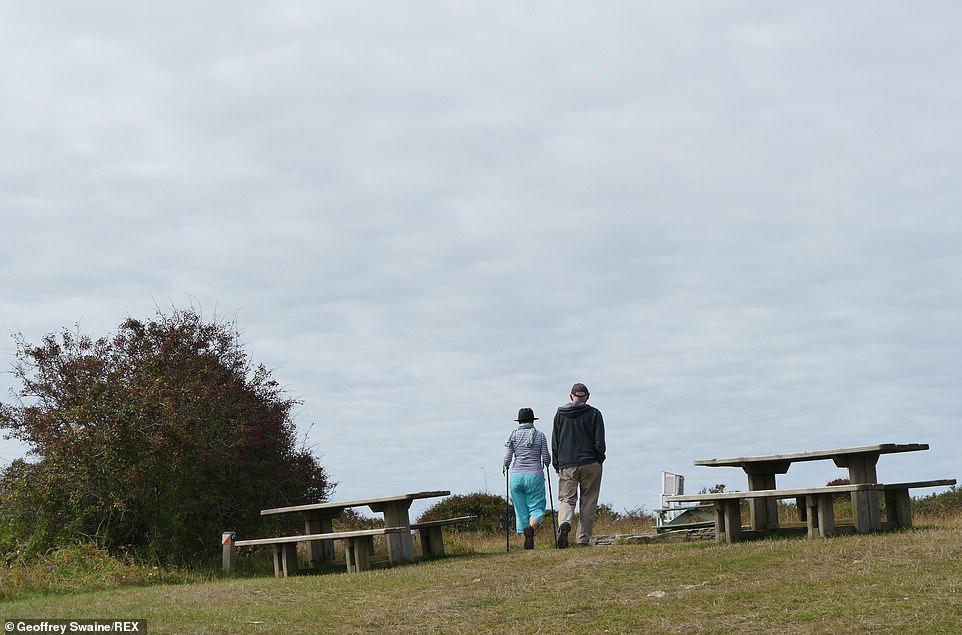 People out and about at Durlston Country Park in Swanage today. As rain is expected to fall throughout much of next week walkers take advantage of the larhel 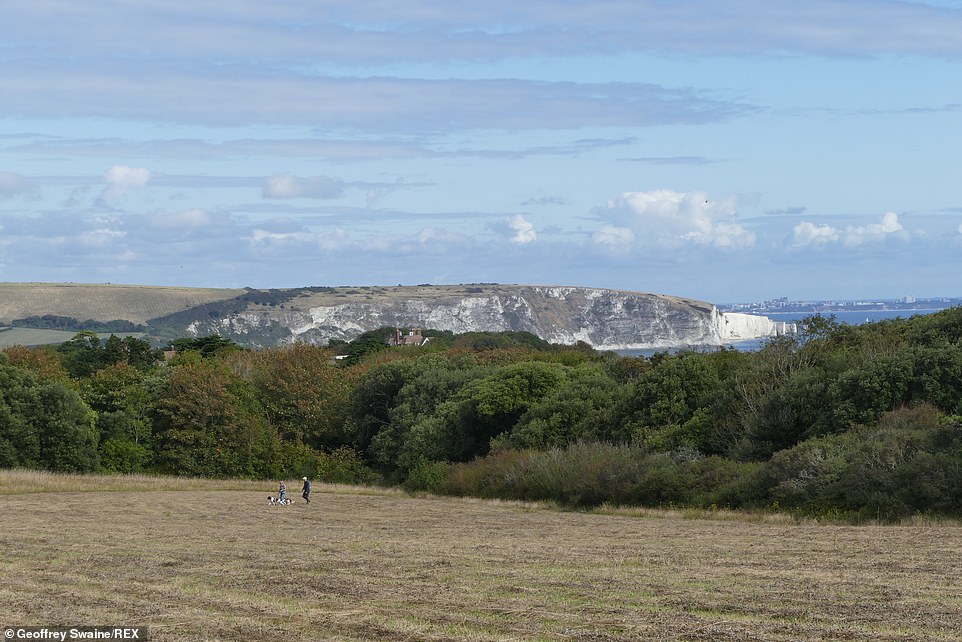 Cool and clear: Dog walkers in Durlston Country Park, Swanage, this morning, where minimal cloud allows for a clear view of the bay and white cliffs 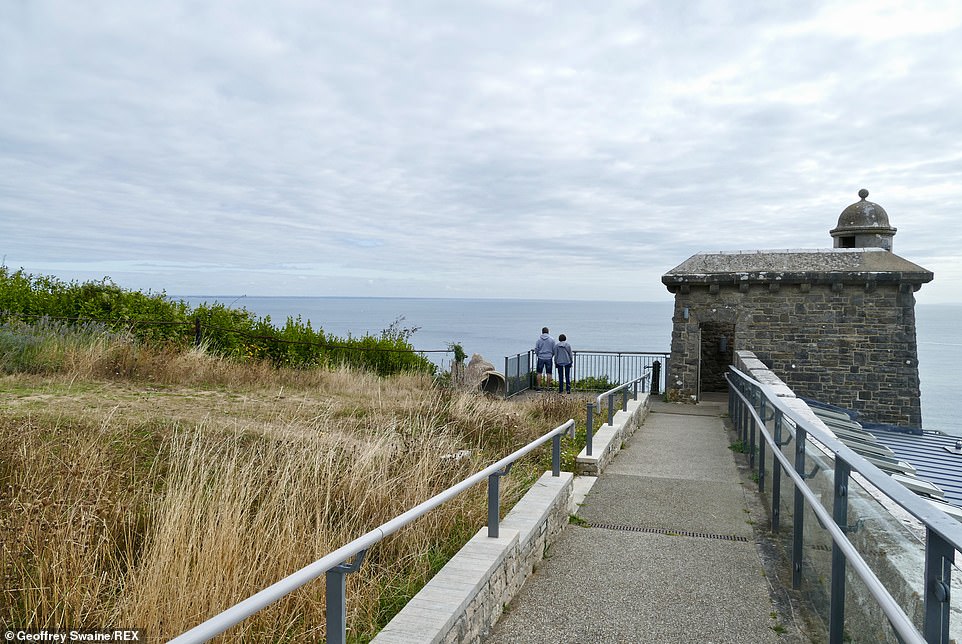 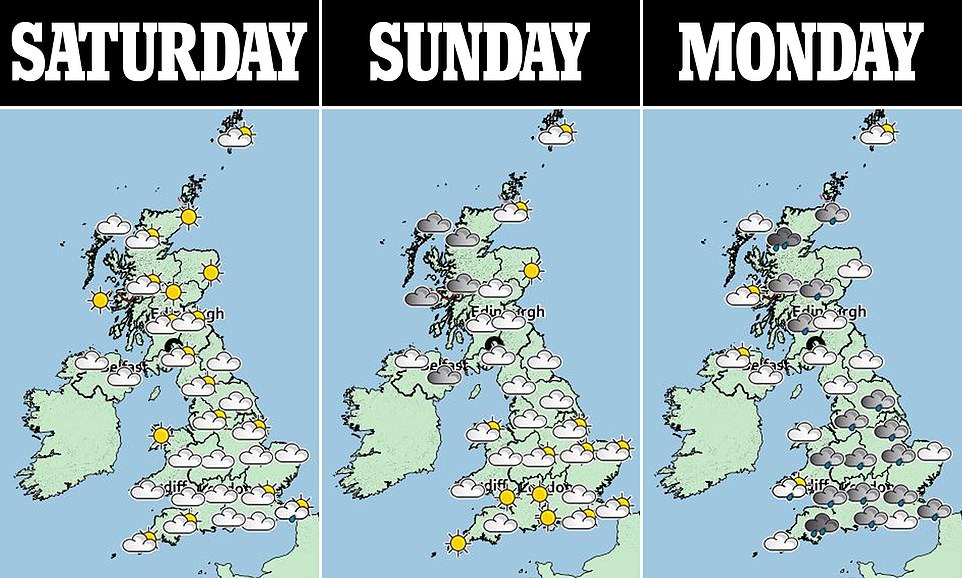 Though the temperatures remain similar tomorrow large cloud cover tomorrow will mean less opportunity to sit in the sun for those holding on to the last bursts of summer.

Strong northerly winds on the east coast expected to make low temperatures feel much colder as temperatures fall to 53F (12 C) in parts of the east.

Monday will see a band of heavy rain move its way slowly from the North east across the UK which will eventually make way for sunny skies and warmer temperatures, with highs of 60F (16C).

Tuesday will see the rain dry up with spells of sunshine, but only briefly, as Wednesday will see strong winds batter the UK as Hurricane Dorian dissipates.

OIi Claydon, a meteorologist at the Met Office said: ‘The remnants of Dorian are expected to arrive in the UK late on Tuesday afternoon, but will only affect northern parts of the country.

‘By then it will have calmed down significantly, and it is no longer expected to arrive at the same time as Tropical Storm Gabrielle which earlier weather patterns had predicted.’ 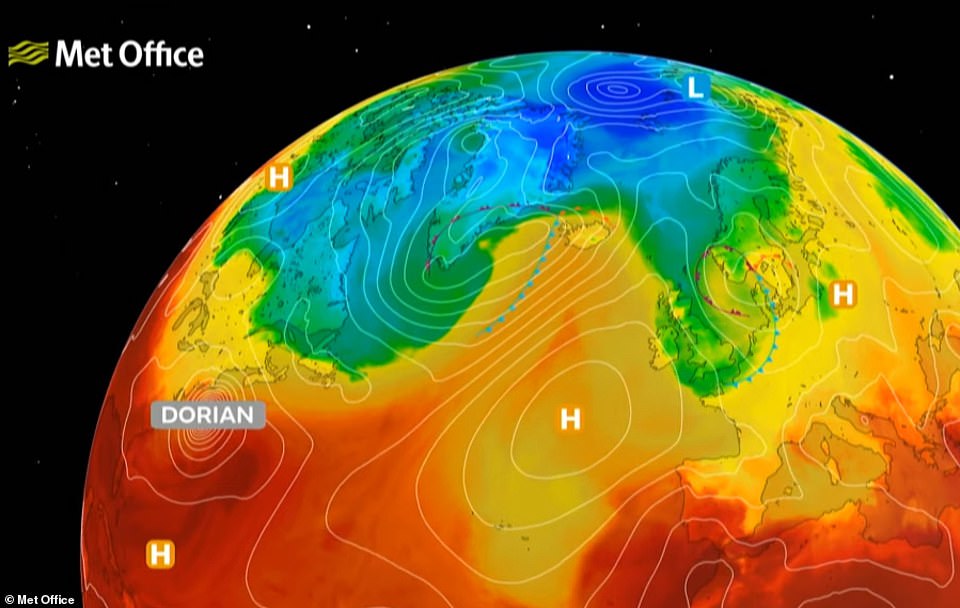 A graphic shows where Hurricane Dorian is expected to be in relation to the UK by Saturday, but will eventually move into the jet stream bringing wet and windy weather to northern parts of the country

Instead, the weather surrounding Gabrielle is uncertain, Mr Claydon explained. But added that it was expected to arrive later in the week than Dorian – which will move east to west across the UK.

Mr Claydon added that the winds brought by Dorian will no be too disruptive, but added that ahead of its arrival the country should prepare itself for chillier temperatures over the weekend.

He said: ‘This weekend will be quite cold, with some frost even appearing in northern parts of the country. But as we move into next week these will move back up to the mid-teens again.’ 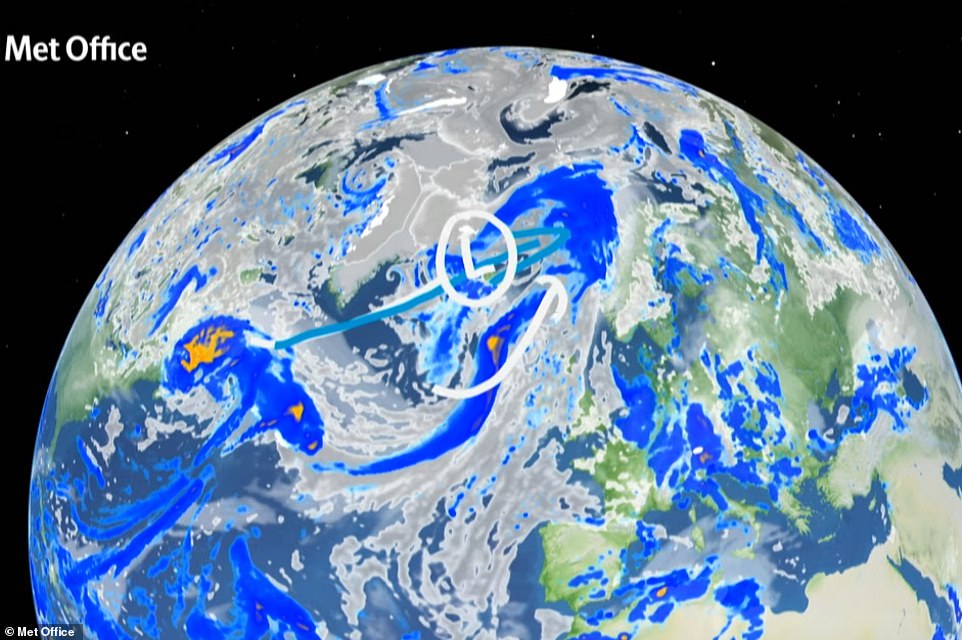 By early next week, Hurricane Dorian will have moved into the jet stream and across the Atlantic moving towards seas to the north of the United Kingdom (pictured in the blue arrow) – delivering a bout of wet and windy weather 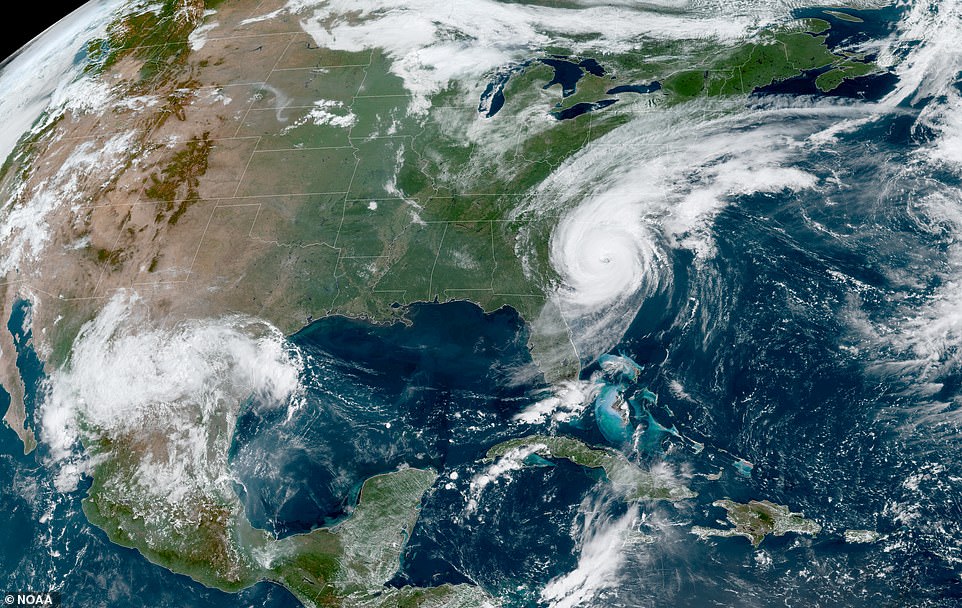 Hurricane Dorian (pictured in a satellite image), which devastated the northern Bahamas from Sunday to Tuesday, is currently pummeling the coasts of the Carolinas on its northward track up the US bringing winds of up to 100mph

Tens of hundreds rally for removing of US base off Okinawa
Mom carried her dead daughter, 19, to a morgue after power outage in Venezuela shut down hospitals
Mother and ex-policeman accused of sex act outside school in Oldham during school run face retrial
Mansion where mob boss Tony lived in TV show The Sopranos goes up for sale for £2.7million
Charles Bronson 'welcomed' to attend ex-wife's funeral by her new lover
Twisted post boxes designed by artist Alex Chinneck called Alphabetti Spaghetti around England
Inside the coronavirus ghost ship
Commuters urged to face away from other passengers and wear a mask