Ever since he returned to high office by taking a seat in his brother’s government, Jo Johnson’s friends have been wondering how he would square his personal/political circle.

Would the deep bonds of family loyalty prevail or would he stick to his moderate principles and resign his ministerial position?

Yesterday he gave the answer – he could not stomach Boris’s hardline stance on and quit the Government, straining not just its tenuous control on power but also triggering an existential psychodrama within the Johnson family. 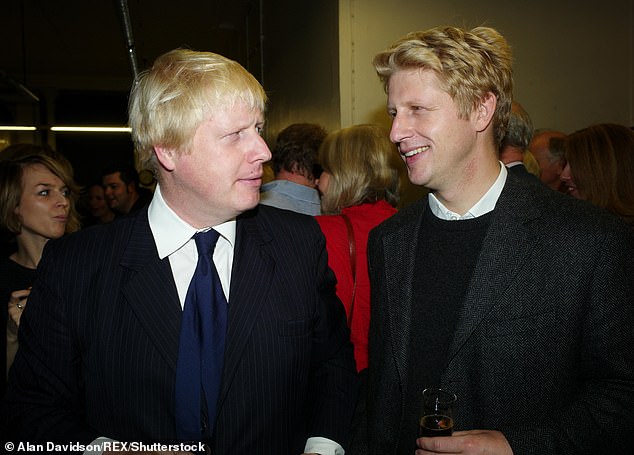 Boris Johnson’s brother Jo decided told his brother he would quit the government just hours after Boris’s bill for a general election was defeated. (Pictured: Boris and his brother at the book launch party for Diary of the Lady in Covent Garden, London, in September 2010) 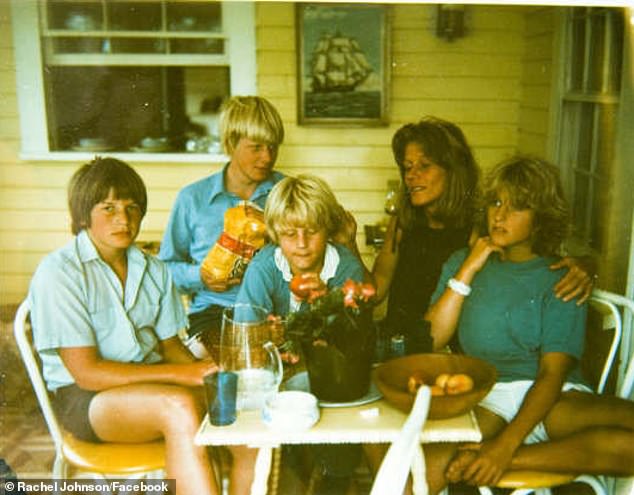 Friends had been wondering how Jo, a staunch Remainer, would square his personal and political circle. (Pictured: Young Boris, centre back, with sister Rachel Johnson and his family)

His 40 days in charge of the universities brief – the second time he held the role – may go down as one of the shortest ministerial careers in modern history.

Unlike Boris, Jo is a staunch Remainer. But while his reasons for quitting are not unexpected, his timing has caused a mixture of consternation and fury.

Jo broke the news to his brother in a private meeting in 10 Downing Street on Wednesday evening, just hours after Boris’s attempt to call an election was stymied in the Commons. His resignation was only made public yesterday after he issued a statement in the afternoon.

’What on Earth was he thinking of? He could have quietly soldiered on knowing an election was looming and made his announcement then when it would barely have made a ripple,’ said one Whitehall source. ‘By choosing to do it immediately after the worst few hours in his brother’s premiership seems almost gratuitous.’

Even seasoned observers were yesterday left astounded by the self-serving tone of the younger Johnson’s stage-stealing intervention, which has echoes of the poisonous feud of the Miliband brothers, who fought each other for the Labour leadership in 2010. 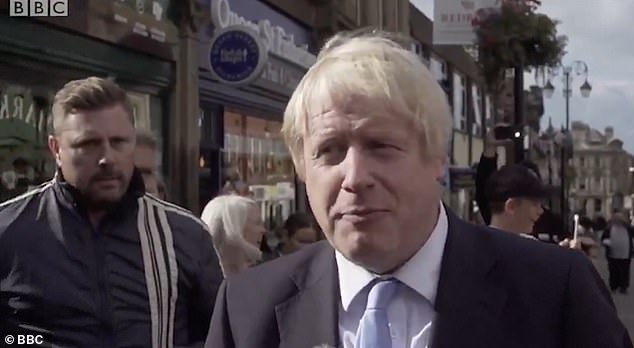 Jo Johnson’s period on the universities brief, which lasted for 40 days, could go down as one of the shortest ministerial careers in history. (Pictured: Boris Johnson in Morley, Leeds, today. He was confronted by a member of the public that asked why he wasn’t negotiating in Brussels)

Nine years after younger brother Ed triumphed over David, who had been Foreign Secretary, the scars of that Miliband fratricide have not healed.

But last night friends of the Johnson family maintained that while the Prime Minister is devastated by the very public nature of his brother’s abrupt exit, the blood ties between them will not be broken.

‘The sibling bonds of loyalty in the Johnson family are indestructible,’ said a family friend. ‘With the Johnsons, family is family and politics is politics. The problem is the family became too interwoven with the politics.’

Outsiders will continue to question Jo’s judgment, however.

After all, it is less than a year since he last resigned as Universities Minister. That, too, was over Europe when he walked out on Theresa May, describing her withdrawal deal as a choice between ‘vassalage and chaos’.

The wounding choice of words by Jo, who like his brother is a former journalist, inflicted huge damage on an already weakened Mrs May.

But will his latest resignation have a similar effect on his older brother? We understand that Jo had been wrestling with his conscience over Downing Street’s hardening anti-EU rhetoric from almost the moment he accepted the offer to serve in his brother’s administration. 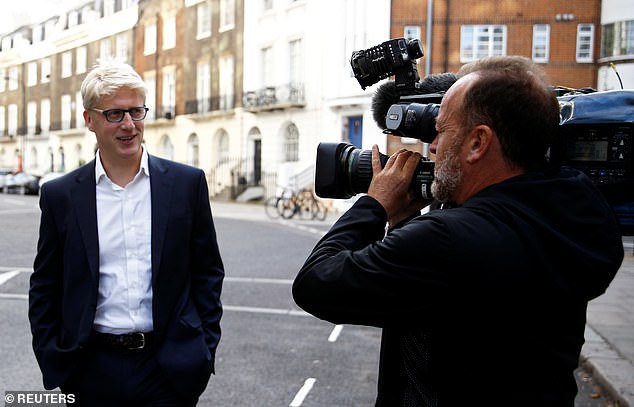 Friends have maintained that while the prime minister is devastated by his brother’s exit, their ties remain strong. (Pictured: Jo Johnson leaving his house in London yesterday) 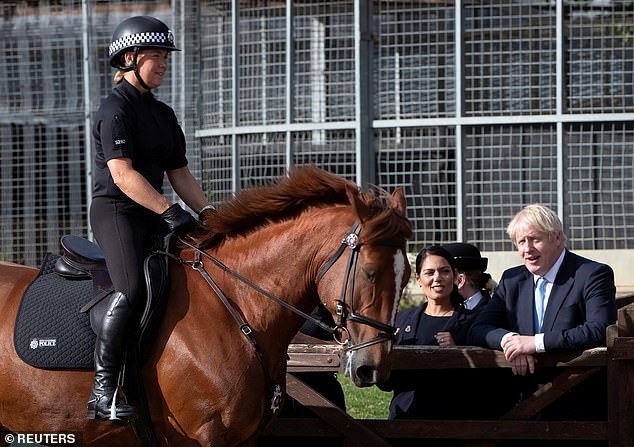 Jo Johnson had reportedly been wrestling with his conscience over Downing Street’s hardening anti-EU rhetoric from almost the moment he accepted the offer to serve in the government. (Pictured: Boris Johnson and Home Secretary Priti Patel in Yorkshire yesterday)

He felt increasingly uncomfortable with the divisive rhetoric used in Tuesday’s House of Commons debate, where MPs voted to wrest control of the Brexit agenda from the Government. But the final straw came when he learned that 21 MPs, including the veteran Father of the House – and mentor to Jo – Ken Clarke, had been expelled from the party.

At a drinks party the same night Jo was sombre.

‘Jo’s political blood is much more like Ken Clarke’s than his brother’s,’ said a friend. ‘He was telling people that if there is going to be an election it is clear the Tory leadership – ie. Boris – only want dyed-in-the-wool Leavers. It means there is never going to be any room in the party for him.

‘It has been incredibly difficult for Jo because he loved the job and he loves his brother.’

But Jo’s torment wasn’t just confined to the polar opposite views he has on Europe with Boris. There are strains much closer to home too. Jo, 47, is married to prize-winning Guardian journalist Amelia Gentleman, 47.

She is the daughter of Left-leaning artist David Gentleman, best-known for designing scores of postage stamps. Her family are at the nexus of a north London liberal-Left establishment tribe.

Indeed, no paper campaigned more viciously against Boris during his leadership bid than The Guardian. A Johnson source told us: ‘The Guardian have a Boris-bashing unit which obviously has made life much more uncomfortable for Jo.’

For her part Amelia – known as Milly – has been put in a ‘protective cocoon’ by her employers to spare her any embarrassment over Boris-baiting during editorial conferences. 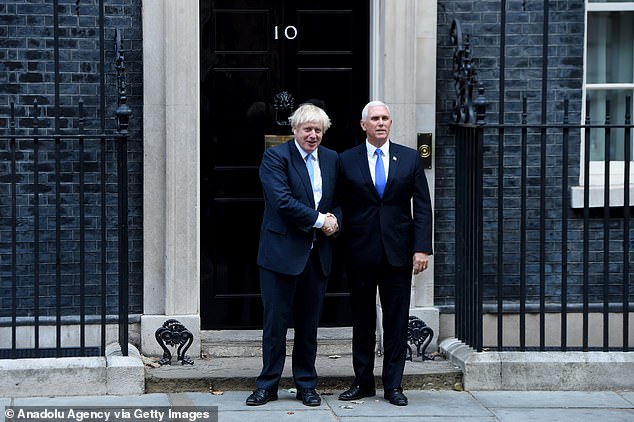 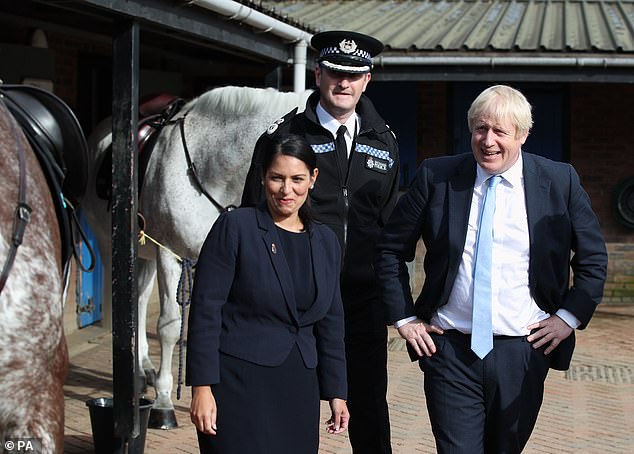 A Johnson source also said that The Guardian’s ‘Boris-bashing’ unit had made the situation much harder for Jo. (Pictured: Boris Johnson with Home Secretary Priti Patel in Yorkshire yesterday ahead of announcing more funding for police officers)

This was particularly apparent when news broke about Boris’s drink-fuelled dispute with his girlfriend Carrie Symonds in July. It was The Guardian, which normally loftily ignores domestic tittle-tattle, that revealed the story and published the account of the couple’s row which had been cynically recorded by a neighbour.

The couple have struggled to stop the ‘Boris effect’ from disrupting their domestic social lives. According to a close friend, Jo was harangued at a friend’s recent 50th birthday party while his wife was by his side. ‘It was a social occasion and while some people deliberately snubbed him, one person came up to him and was rude to his face, denouncing him for being a Tory and calling him evil. The person was so angry he sprayed Johnson with spittle.’

Domestic tensions over Jo’s politics are hardly new. When he told his wife of 14 years that he was abandoning his career on the Financial Times to stand in the safe Tory seat of Orpington at the 2010 election, she burst into tears. ‘She spent the whole afternoon crying on the sofa,’ said a family friend.

Just over nine years later, Jo’s decision to resign has triggered sympathy from his party’s Remainers.

Sir Nicholas Soames, Winston’s Churchill’s grandson and one of the 21 MPs to lose the party whip this week, said: ‘I have been deeply and abidingly shocked by what’s happened in the Tory Party in the last few days. But Jo Johnson resigning like this is the most shocking thing I have experienced in 36 years at Westminster. 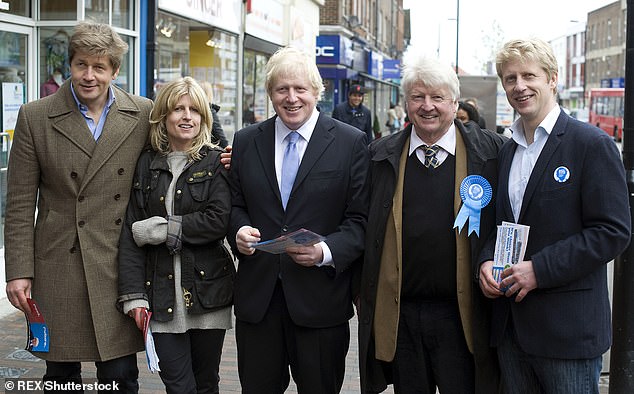 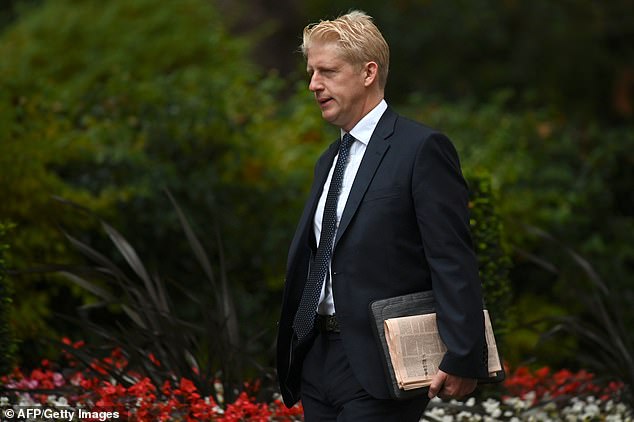 Jo Johnson is said to be quieter and less charismatic than his brother, the prime minister, but also cleverer and considerably more thoughtful. (Pictured: Jo Johnson arrives to attend a meeting at 10 Downing Street on Wednesday)

For Jo, who is one of the cleverest men at Westminster and one of the most thoughtful, to feel he has to do this to his brother, and in public, has all the elements of a Shakespearian tragedy.’

It’s true that no family has so theatrically dominated the modern political scene quite like the Johnsons. But while Boris is outgoing, flamboyant and openly ambitious, Jo, seven years his junior, has followed a less publicity-prone trajectory. Yet while he is quieter and less charismatic, many say he is cleverer and considerably more thoughtful.

The youngest of former MEP Stanley Johnson’s four children by his first wife – there are another two children by his second – Jo was perhaps the most competitive. Educated at Eton and Oxford like his brother, he secured an early notable advantage over Boris, graduating from Balliol College with a First. (Boris received a 2.1)

According to family legend, when the results came out sister Rachel – the broadcaster and columnist – rang Boris to tell him the ‘terrible news’.

While Boris now occupies No10, it was the younger of the two who was being talked of as a future prime minister.

Jo was head of the Downing Street policy unit for two years and he later drafted the 2015 Tory manifesto which contained the fateful commitment for a referendum on Britain’s membership of the EU.

‘No ifs or buts, Jo was four-square behind that manifesto pledge and he stood for election on a commitment to respect the Referendum result in the 2017 election too,’ said a Tory figure.

But while Jo made steady if unspectacular progress in the lower reaches of government, Boris took centre stage as Foreign Secretary after the referendum. Despite their sharp political differences, they remained close. On one occasion Jo joined an intimate dinner at Boris’s official residence in Carlton House Terrace.

A fellow guest recalls: ‘Jo was very respectful of his brother – he clearly held him in huge regard. But they didn’t josh with one another as equals. Boris alone held the floor.’

A family friend cautions against suggestions that the relationship between the brothers will be seriously fractured.

‘They are extremely close and that old adage about blood being thicker than water could have been written for the Johnsons. Whenever they are all together – which is often – there is an element of the Johnsons against the world. Not so much a sense of entitlement but of sticking together through thick and thin. They will never fall out like the Miliband brothers did.’

Nothing illustrates that better than on the morning of Boris’s leadership campaign launch back in June. Jo was spotted trudging slowly through St James’s Park, shoulders slumped, brow furrowed. He looked like a condemned man approaching the gallows.

Asked if he was going to back Boris, he slowly replied: ‘You do what you have to do. I’m wandering slowly there.’

While he has no regrets about backing Boris for the leadership, Jo now knows he should have turned down the ministerial job. As for the Prime Minister, he also realises he made a mistake. ‘He should never have offered Jo a job in the first place as it was inevitable their paths would sharply divide over Europe,’ said a Tory MP.

Friends were putting the best possible gloss on it.

According to Boris’s biographer Andrew Gimson, Jo’s resignation was actually something of a favour for the Prime Minister.

He said: ‘He could never promote Jo to the Cabinet because he would be accused of nepotism and yet he was too good to remain in the second division of junior ministers. This at least is a way out of that conundrum.’

That may be true. But the fact is that neither of them emerge from this sorry mess well.

Venezuelan President Nicolas Maduro survives alleged drone assassination try
Two British children are stranded 11,000 miles away in New Zealand for Christmas
Fresh rail strikes to bring more misery for Christmas commuters from TOMORROW
Paedophile was shot dead in Italy 'by hitman hired by father of a 15-year-old victim'
The child murderers whose crimes were so horrific their names were released to the public
Tiger Woods takes the lead with four holes left to play in The Masters
Tennis fan starts to REALLY enjoy the US Open when Spanish player Feliciano López changes his shirt
Taking aspirin three times a week may cut the risk of dying of