A shoebox full of love letters between a courting couple has finally been returned after 70 years.

Kim Rowe was sorting through her attic when she rediscovered the letters sent in 1948 and 1949 between a Norma Hall in Kent and a Bob Beasley in the British Army overseas.

Her mother Cherry Vallance took the letters 20 years ago when a neighbour in Aldershot discovered them and told her she was planning to throw them in the bin. 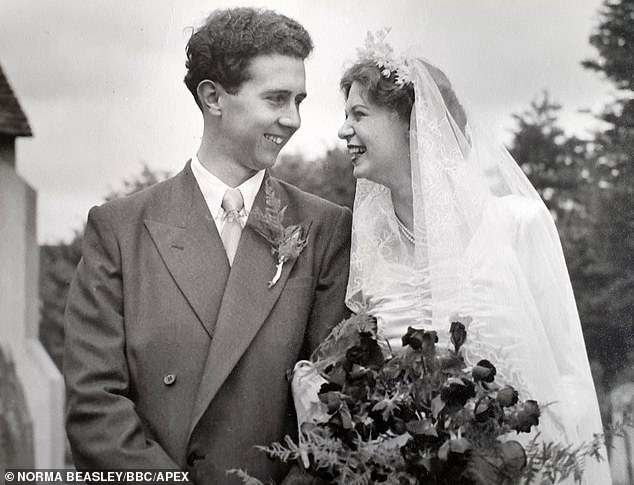 Bob Beasley and Norma Hall exchanged letters while he was serving in the military in Egypt in 1948 and tied the knot in Uxbridge when he returned in 1951. In the first few letters between Norma and Kim Rowe, when they were organising to hand them over, Norma said their war-time conversation started as friendly but blossomed into something more 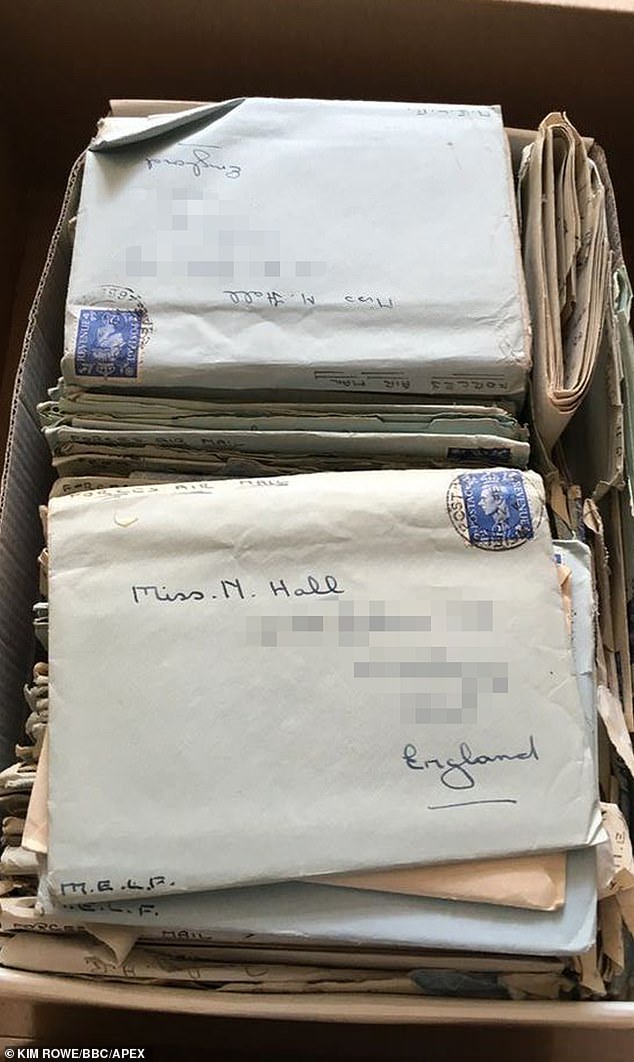 Kim Rowe’s mother Cherry Vallance had taken the letters 20 years ago when a neighbour in Aldershot, who had discovered them in her attic, told her she was planning to throw them in the bin. Kim says they remain in their initial wrapping from when she found them

She realised they were somebody else’s letters ‘could not bear’ for them to be dumped – and even took them with her when she moved to Somerset.

Cherry never got the opportunity to find Norma and Bob before her death in 2016.

But when Kim came across the letters again this year, she felt it was important to find the couple and return the memories to them before it was too late.

She posted a picture of the letters on Facebook with the caption: ‘I only read two of the letters for information purposes but not the rest as I feel they are private to the couple. Bob obviously loved Norma very much and I assume it was Norma who kept the letters.’ 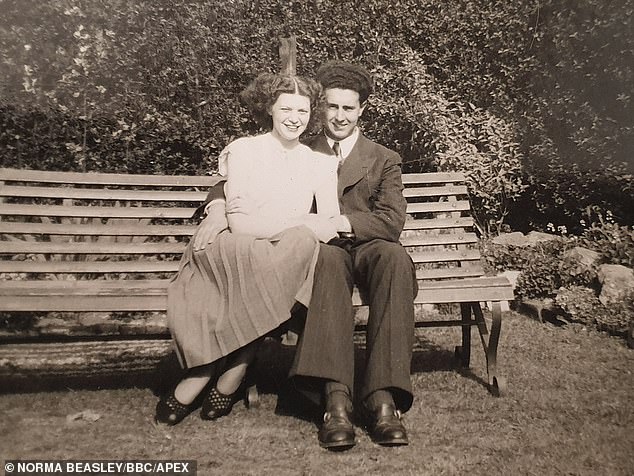 Inseparable: Norma was 18 years old when she met Bob on the Woolwich Ferry in the 1940s

In the early exchanges between Norma and Kim, the 88-year-old said: ‘We would write to each other – first as friends – but then it became something more. He’d tell me about his life and I’d tell him what was happening at home.

‘I don’t think my life was as interesting as his out in Egypt. I didn’t even like writing letters but I would write to him every week. I used to send him a magazine every week.’

Kim posted a picture of the envelopes on Facebook telling friends the only clues she had: ‘As you can see, Bob was in the forces and Norma lived in Kent. The postmarks are 1948 and 1949. Facebook please do your stuff.’ 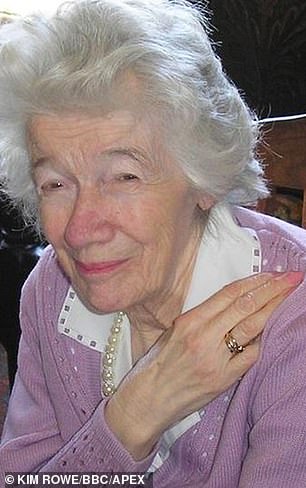 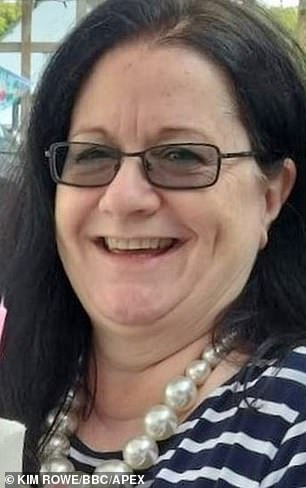 Kim Rowe (pictured right) told the social media users who were checking on her ventures at finding the couple, how Norma was a ‘wonderfully warm lady, with a lovely laugh’ when they first spoke and it was probably she who had stored them

She had no inkling that her call for help would lead to 11,000 shares and 1,500 reactions but most importantly an address and a new pen-pal friend coming into her life.

Thanks to well-wishers on Facebook, a stranger with a penchant for romance and a daughter wishing to fulfil her mother’s wishes – she managed to reconnect the Notebook-style story.

One of Kim’s friends on Facebook did some digging and told her the couple appeared to have got married in 1951 in Uxbridge.

‘His name is Howard R Beasley. So maybe a Robert. So lovely to find these letters and know they actually did marry,’ was posted under Kim’s original request.’

Alicia Anderson wrote: ‘How beautiful! It will be an amazing gift for their family or he’s/ hers if he didn’t make it back. Wow what treasure! Thank god your mum didn’t throw them away!’ 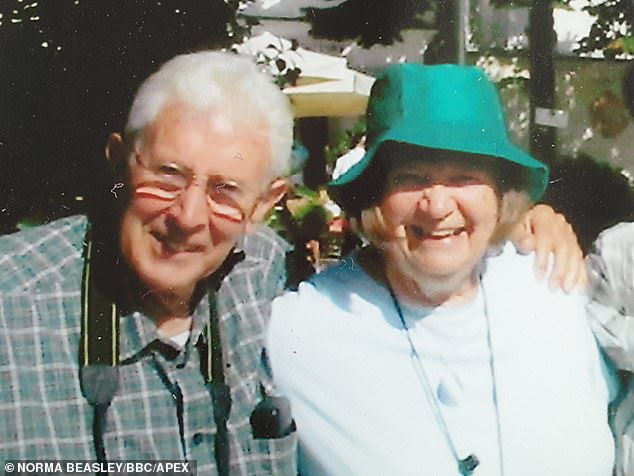 Kim says ‘Bob obviously loved Kim very much’ from looking at a few initial exchanges between the love-birds (pictured) despite Kim’s initial worry that her life ‘was not as interesting as his out in Egypt’. They went on to have five children and six great-grandchildren

Kim sent a letter to the address hoping it was the right family and made it clear she wanted them to be back in their rightful hands.

Norma Beasley was 18 years old when she met Bob Beasley on the Woolwich Ferry in the 1940s.

Impressed by his banter, they started out as friends before the relationship eventually developed into long-time love. 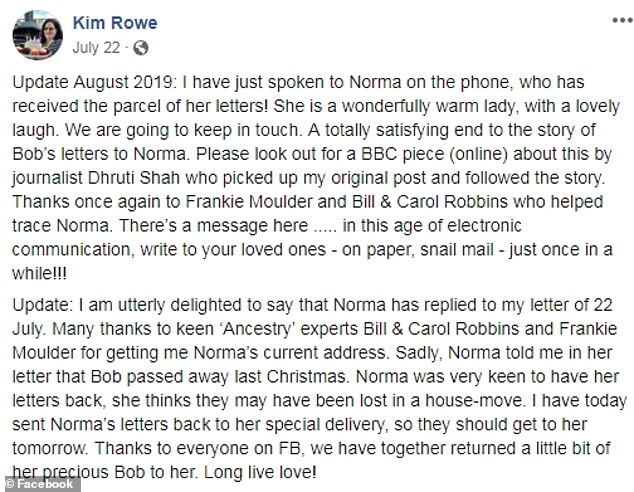 Now aged 88 and living in Lincoln, she had no idea the letters the sweethearts had written while she was living at her parents’ home and Bob was on military service overseas were even still in existence.

She was shocked to receive Kim’s letter, especially as Bob had died just a few months previously in December 2018.

She hurriedly wrote back, delighted that the letters were coming home and astonished they were still in the original shoebox.

Norma said the couple married soon after Bob returned from his tour of the Middle East and Egypt and moved to the village of Iver in Buckinghamshire in 1951.

Bob worked in carpentry with a specialism in building aeroplanes, while Norma became an office worker. They had five children and six great-grandchildren.

But although she’s pleased the letters are back in her possession, she admitted she can not yet face opening the envelopes and love notes without Bob there. ‘The letters are still in the original wrappings I put them them in. I can’t read them just yet.’

Norma said she had left the letters at her parents’ home but had no idea how they had got all the way to Somerset via Aldershot.

She presumed her parents had left the letters behind accidentally when they moved from Kent to Christchurch in Dorset.

‘Maybe Mum didn’t take them and whoever bought the bungalow kept the letters and moved about. I just don’t know – it’s a mystery. I thought they had gone forever.’

But that’s not the end of the tale – Kim and Norma have exchanged telephone numbers and plan to keep in touch.

Kim told the romantics keeping an eye on her Facebook page that she spoke to Norma for the first time in August, describing her as a ‘wonderfully warm lady, with a lovely laugh’.

She added: ‘There’s a message here… in this age of electronic communication, write to your loved ones – on paper, snail mail – just once in a while.’

Love Island's Laura Anderson and Paul Knops are STILL not official
Grand Designs couple put renovated 'mini-castle' up for sale for £850k
Luther fans complain series five is 'too gruesome' with 16 stabbings, 50 gunshots and 11 dead bodies
Women's wrestling match sold-out on International Women's Day
The headset that claims to use 80 lasers to treat long locks that aren't suitable for a transplant
Protesters photograph themselves eating bananas in Poland
Millions of families are being duped into buying shoddy goods on Amazon
British backpacker, 23, claims she was raped in hostel during farm work