has charmed the nation with her cheeky antics, even daring to stick her tongue out at cameras.

But on her first day of school this morning she was on her best behaviour.

Arriving at Thomas’s Battersea, where her brother George is two years above, four-year-old Charlotte clung to her mother’s hand and was sure to keep her manners in check.

Cracking her signature smile, and confidently waving to crowds of reporters, she flicked her hair as she strolled over to meet her teacher.

Her calm and collected demeanour is a world away from how her brother George, who was also by her side this morning, dealt with the same experience two years ago. 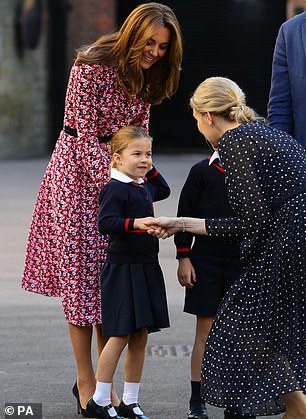 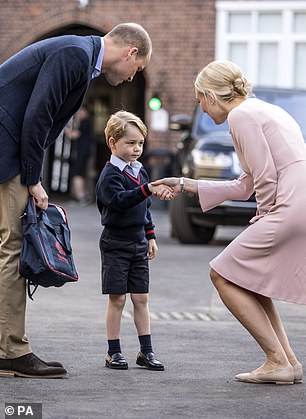 Charlotte (left today) smiled as she confidently took the hand of her teacher, head of Thomas’s lower school, Helen Haslem, who also greeted George on his first day two years ago (right) 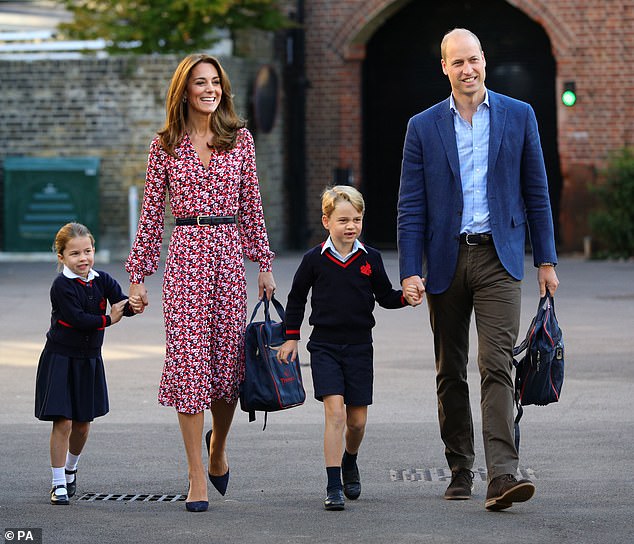 Charlotte clung to her mother’s hand, while brother George held his father’s as they arrived at Thomas’s Battersea for the Princess’s first day at school today 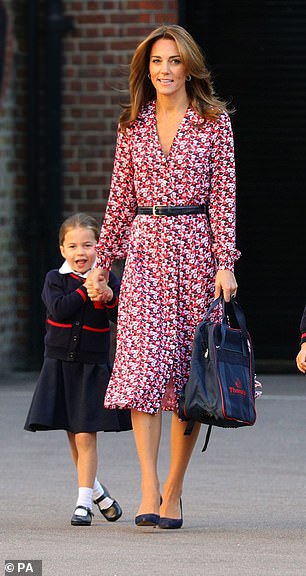 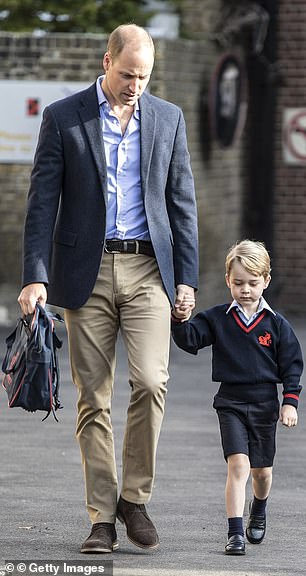 Charlotte (left) appeared confident walking into her first day of school at Thomas’s Battersea with her mother at 8am today, while her brother George (right) appeared more nervous on his first day two years ago

The young prince, now six, appeared anxious as he nervously walked with his father through the school gates of the exclusive London private school in September 2017.

He had to make the journey without his mother, who was suffering morning sickness while pregnant with his younger brother Louis.

Believed to have been much more comfortable at home with father William and mother Kate, George looked unsure as he shook hands with his teacher Helen Haslem.

In comparison, royal sources said Charlotte was ‘excited’ to begin her schooling today, after turning four in May. 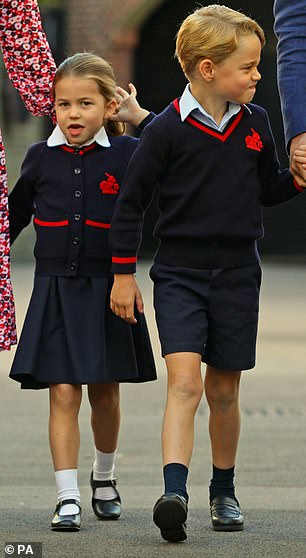 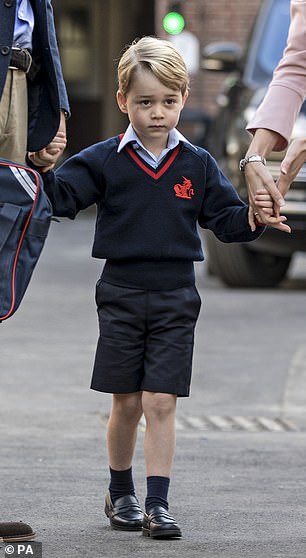 Charlotte (left) flicked her hair walking as she strolled along next to her brother today (right). George appeared far more nervous when he started two years ago 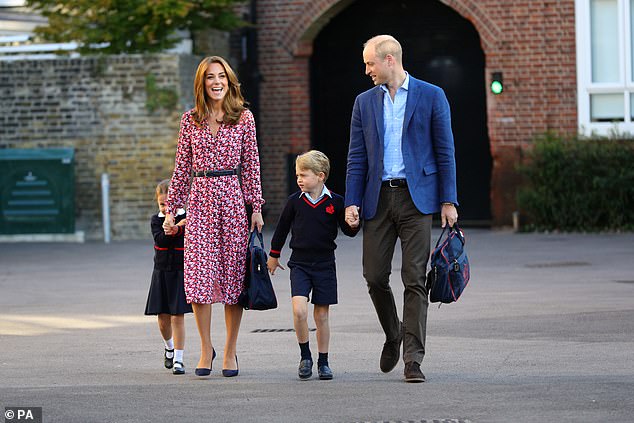 The Duchess of Cambridge chuckled as her daughter momentarily hid behind her, while father William beamed and brother George walked with them

Any royal fan will know what an exciting time it is, but here at Fashion Finder HQ we’re more enthralled by the Duchess of Cambridge’s outfit.

Proving she is one stylish mum, Kate wore a gorgeous floral dress by Michael Kors with a belt to break up the pattern and pumps to elongate the legs. Both the Duke and Duchess looked dapper as always, didn’t they?

The dress is typical of Kate’s signature aesthetic, so it’s no surprise we’ve spotted her wearing it before.

Whether you’re taking your little one to school or want to channel Kate’s polished look for the office just click (right) to shop a very similar style over at NET-A-PORTER.

Alternatively, replicate this royally-approved trend by shopping a look-alike from the carousel below, which includes pieces by Gant, Whistles and River Island.

Addressing her mother first, Mrs Haslem asked: ‘How are you? Did you have a nice summer?’, before bending down to shake George’s hand and then Charlotte’s.

Charlotte may have been reassured by the presence of her brother, who is believed to have ‘settled in well’ at the same school.

Charlotte looked confident as she took her teacher’s hand and gave the cameras a quick glance before she was led through the doors.

The young princess will referred to by her teachers and classmates as ‘Charlotte Cambridge’, similar to George.

Brother and sister: Charlotte (left) was calm and collected as she was taken through the school doors this morning, with George pictured doing the same (right) 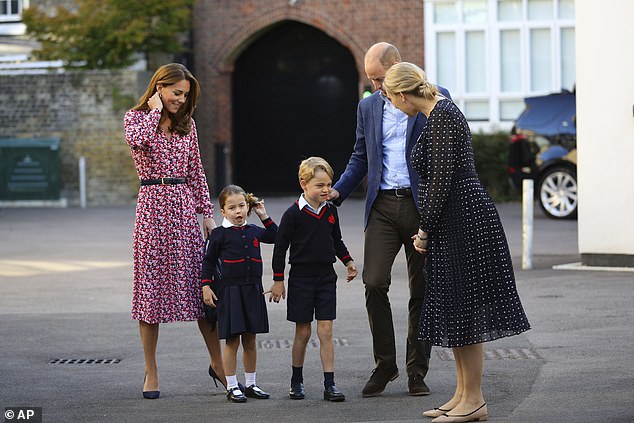 Under the school’s policy, William and Kate’s fees for Charlotte will be nearly 2 per cent lower than George’s because she is a second child at the school.

At the moment, the term fee for the eldest child of the Reception and Year Two-tier is £6,429, while the charge for the second child it is £6,305, according to the school’s website.

If the Cambridges’ youngest child Prince Louis attended the same school, the fee – as it stands under the current fee levels with effect from September 1, 2019 – for the third child would be £5,790.

The school is housed in a Grade II listed building, the former Sir Walter St John’s Grammar School which dates back to 1700.

Thomas’s Battersea, which describes itself as a Christian school, open to children of all faiths, believes in ‘praise as the greatest motivator’.

Parents are told their children will be in an atmosphere which seeks positive relationships between pupils, teachers and parents.

Art, ballet, drama, ICT, French, music and physical education are all taught by specialist teachers from a child’s first day.

William and Kate are familiar figures at the school gate and have thrown themselves into school life, helping out at coffee mornings and cheering George on from the sidelines at sports day. 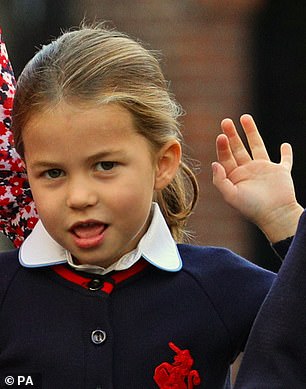 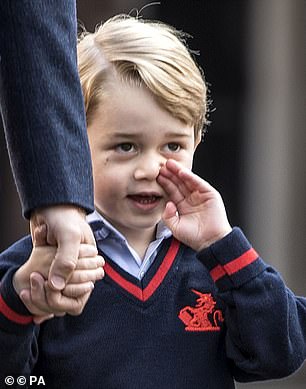 Then and now: Charlotte (left) waved to cameras this morning, while her brother George appeared nervous on the same day two years ago (right)