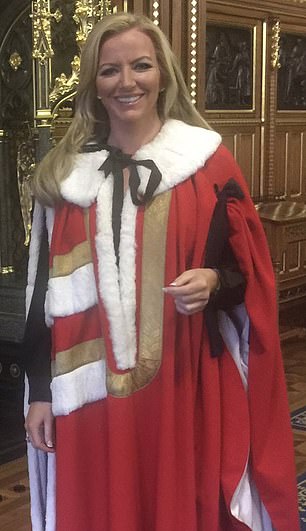 Boris Johnson appears poised to try again to secure an early General Election after the Government announced the rebel No Deal bill would be pushed through the House of Lords by tomorrow night.

The Prime Minister could launch a new bid as early as Monday to send Britain to the polls. Labour leader Jeremy Corbyn had indicated he may support the motion if No Deal was taken off the table.

Yesterday evening it appeared Tory Lords would attempt to filibuster the legistlation as more than 100 amendments were tabled for discussion and the Lords session stretched past 1am.

But in a dramatic early-hours move, the Tories announced a deal had been reached with Labour that appears to clear the way for the Bill to receive Royal Ascent by Monday.

Peers had been gearing up for an extraordinary war of attrition in the House of Lords last night to frustrate the passage of the No Deal  Bill.

After passing in the Commons, the Bill moved to the Lords for the next stage, with peers primed for a dramatic clash. Opposition parties, and some Conservatives, planned to expedite the Bill through.

But pro-Government peers tabled scores of amendments in an attempt to filibuster the vote, or delay it so the Bill runs out of time before Parliament is suspended next week.

Around 90 amendments have been submitted, meaning peers will have to spend all day and night debating and voting on them over the next few days.

Some turned up with their sleeping bags and duvets to see the first all-night session through.

Those backing the deal — Labour, the Lib Dems and many Remainer Conservatives — plan to simply keep sitting and voting until the job is done.

Rotas were being organised to ensure there were enough peers on hand to keep voting down the much smaller band of pro-Government Lords.

The peers were vocal about having to sit through the night on Twitter.

Yesterday, Lord Newby, Liberal Democrat leader in the Upper House, added: ‘Arriving in Lords with duvet, change of clothes and shaving kit. Could take us a while to see off 86 wrecking amendments on timetable motion today/tomorrow.’

In the opposite corner, Tory peer Michelle Mone tweeted: ‘We are ready with our sleeping bags!’

In a bid to prevent a filibuster attempt, Labour tabled a motion to ensure that the debate would end by 5pm on Friday.

But the Government warned that trying to fast-track a new law to block a no-deal Brexit sets ‘a dangerous precedent’ for the future.

Tackling Lord True, Conservative peer and prominent Brexit critic Lord Patten of Barnes said: ‘Perhaps he could explain to us, if this isn’t a filibuster what is?’ 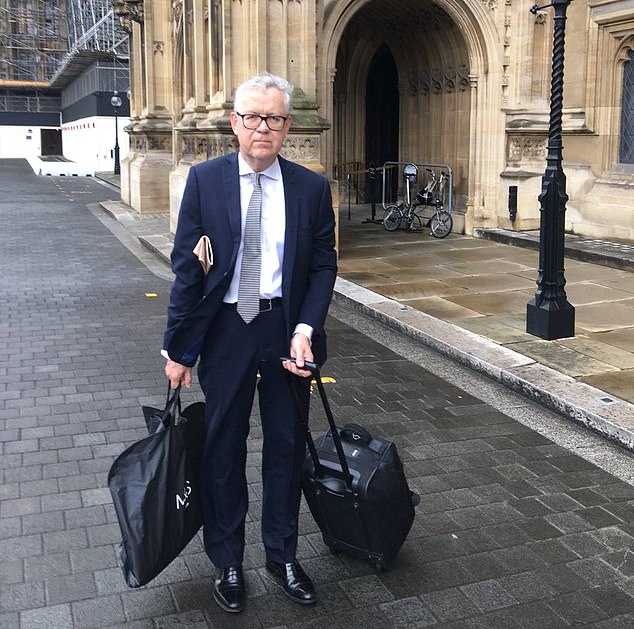 Lord Newby, Lib Dem leader in the Upper House, tweeted a picture of himself arriving at the Lords with his duvet, clothes and shaving kit as peer bedded down for a long night of voting

Lord True said: ‘We have a guillotine hanging over us in this House. We are asked to put our head on the block for the blade to fall and for the nature of business in this House to be changed forever.

‘If I’d been in the French Revolution I would not have been one of those who marched readily and easily to have my head cut off in the guillotine, I would have wriggled and fought.’

‘Under the terms of the motion I am afraid our ways of working and procedures are undermined,’ she said. ‘These are revolutionary changes. What she [Labour leader Baroness Smith] is doing…is putting a bomb under this chamber and this institution.’

Writing on Twitter ahead of the Bill, the Labour Lords team wrote: ‘Looks like Lord Phil E. Buster & his many chums will be out in force later today/tonight/tomorrow to try & prevent us from defending the primacy of the elected House (key principle of UK constitution). A #NoDealBrexit must really matter to some of them.’

Supporting the motion, Lib Dem Lord Newby said: ‘We are not seeking to stifle debate . . . but the brutal and unprincipled prorogation with which we are faced is specifically there to curtail debate.’

But independent crossbencher Baroness Deech raised concerns that the use of the so-called guillotine motion was ‘contrary to the spirit of and practice of the House of Lords’.

The legislation seeks to delay Brexit beyond October 31 unless a divorce deal is approved or Parliament agrees to leaving the EU without one by October 19.

It is also the point at which Jeremy Corbyn has signalled he will back a call for a general election, although many in his party want to delay approval even further until after the extension has been implemented.

Ayda Field reveals she PASSED OUT looking after baby Coco
Ryanair voted the worst airline for the sixth year in a row in Which? survey
Vigilante couriers Biker Biker are fighting moped thieves on streets of London
Eye-rolling Mayor Sadiq Khan is all talk and no action on London violence, says DUWAYNE BROOKS
Two university friends braved the Malaysian jungle stark NAKED for three weeks
Border Force officials stop 52 migrants in four dinghies trying to sneak across Channel into the UK
Greta Thunberg nearly cries as she calls out UN leaders for stealing her future
Composer Ennio Morricone who wrote the music for The Good, The Bad And The Ugly dies aged 91