said the UK already has a ‘gigantic chlorinated chicken’ in a fresh dig at as the Prime Minister set out tough post- trade terms to US Vice President .

The two men discussed the broad terms of a potential trade deal as Mr Johnson welcomed Mr Pence to 10 Downing Street and again made clear that the NHS will not be part of formal discussions.

But the Prime Minister could not resist renewing his war of words with Mr Corbyn as the pair discussed the issue of animal welfare standards.

The question of whether the UK will allow the import of chlorine-washed chicken from the US – it is currently banned in the EU – has dominated arguments over the type of post-Brexit transatlantic trade agreement which could be struck.

Mr Johnson used the remark in the Commons yesterday to insult Mr Corbyn over his refusal to back an early general election as they clashed at PMQs.

The PM had said: ‘I do know that you are worried about free trade deals with America, but I can see only one chlorinated chicken in the House, and he is sitting on the Opposition front bench.’ 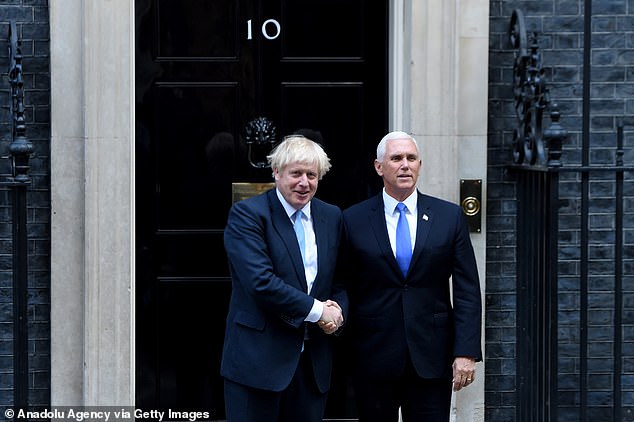 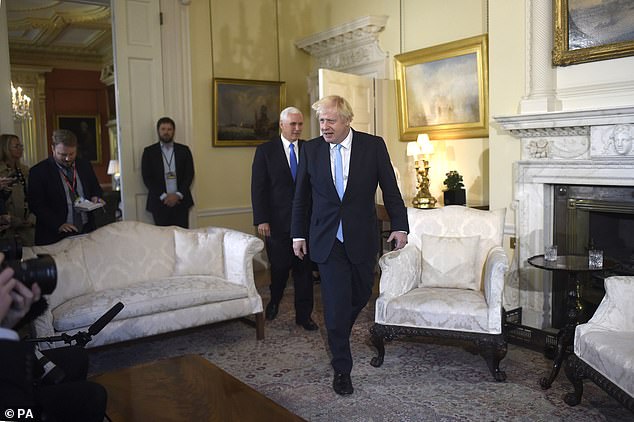 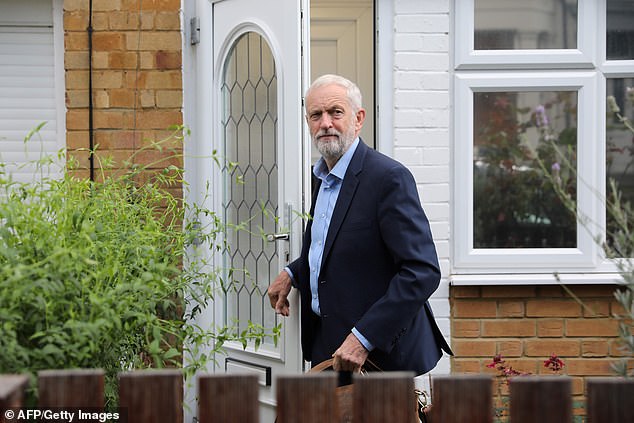 Mr Johnson told Mr Pence the UK already had its own ‘gigantic chlorinated chicken’ in the shape of Jeremy Corbyn, pictured leaving his London home this morning

The prospects of a post-Brexit trade deal being agreed between the White House and Downing Street were given a major boost at the recent G7 summit in Biarritz.

Donald Trump, the US President, was full of praise for Mr Johnson as they met for the first time since the latter became PM.

Mr Trump said he wanted to strike a ‘very big’ trade deal ‘pretty quickly’ and potentially within a year of the UK leaving the EU.

Mr Pence struck a similarly positive tone today as he told Mr Johnson: ‘I spoke to President Trump this morning, your friend, and he sent his very best greetings and to assure you that the United States supports the UK’s decision to leave the European Union.

‘But he also wanted me to convey that the United States is ready, willing and able to immediately negotiate a free trade agreement with the UK.

‘The President often says the US has the biggest economy in the world and we truly believe that a free trade agreement between the United States and the UK could increase trade between our country by three or four times.

‘We are anxious to do that and to stand with you and do everything in our power to strengthen what has been a historic and special relationship between the United States of America and the United Kingdom.

‘It is embodied in the very warm and personal relationship that you have forged with President Trump, with myself and the administration. I am truly honoured to be here.’

Mr Johnson said he wanted to open up the US market to more British businesses and produce.

He told Mr Pence that Americans still do not eat ‘British lamb or beef or haggis from Scotland’ and that needed to change.

The PM said: ‘We know you guys are pretty tough negotiators but we will make sure that a free trade deal works for all of us.’

Mr Johnson added: ‘I think there are still barriers to trade in shower trays, would you believe it, from the UK and many other products where we think we could free up the US market.’

The PM then renewed his assault on Mr Corbyn as he said: ‘Of course, we will do everything to increase free trade but the National Health Service is not on the table as far as our negotiations go. And we’re not too keen on that chlorinated chicken either.

‘We have a gigantic chlorinated chicken of our own on the opposition benches. Anyway – I’m being asked to shut up. Thank you all for coming along.’

Barnaby Joyce is 'set to call a leadership spill in a bold bid to reclaim National's top job'
British man, 30, fights for life after plunging 12 feet from balcony during passionate sex session
Man is kicked unconscious during fight with 'thief who tried to steal his phone' on Barcelona beach
Drinking just ONE glass of wine or pint of beer each night 'can raise your cancer risk by 5%'
Princesses Beatrice and Eugenie head to media tycoon Evgeny Lebedev's Christmas party
Inside Susan Boyle's revamped Scottish council house
Anthea Turner reveals she's postponed her wedding due to COVID-19 crisis
Outdoor socially distanced fitness classes with up to six adults will be rolled out this week