faces claims he is running scared of a general election today after insisting he will block one unless a No Deal had been ruled out.

The Labour leader payed lip service to the prospect of a snap poll, saying he wanted to end austerity and ‘invest in our communities’.

But he said in the Commons last night that he would not vote for an election unless a Bill to block No Deal had already been passed.

‘There is no consent in this House to leave the EU without a deal, there is no majority for No Deal in the country,’ he said. 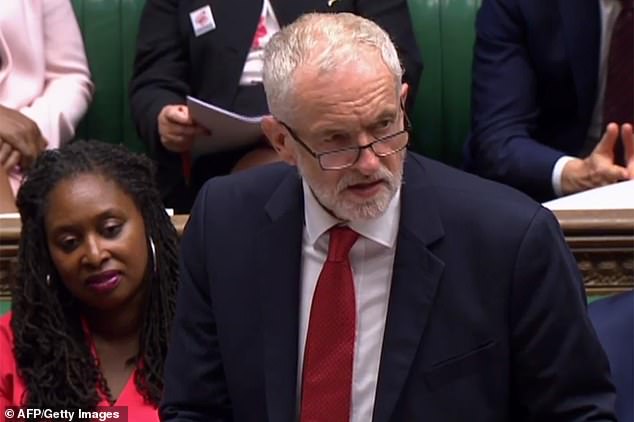 Challenged in the Commons tonight to say he will back a motion calling a snap election, Jeremy Corbyn again dithered

Under the Fixed-term Parliaments Act, the Prime Minister can call a general election only if two-thirds of MPs vote for one – meaning the Labour leader’s support is needed.

Foreign Secretary Dominic Raab said it would be the ‘mother of all U-turns’ if the Labour leader decided not to support an election in the vote, expected today.

How could the UK get to a general election on October 15?

A furious Boris Johnson made good on his threat to start the process of calling a general election after his defeat tonight.

The PM responded to MPs taking control by calling for a vote under the Fixed-term Parliaments Act, saying the ‘people will have to decide’.

The motion was tabled tonight and a vote will happen tomorrow night.

MPs will be asked if they want to have an election, with a two-thirds majority required to trigger a snap poll.

Success will rest on whether Labour formally backs the move – which Jeremy Corbyn insists he will not do without guarantees the UK cannot crash out of the EU during the campaign.

An early election would represent challenges for all of the major political parties.

But some will be more enthusiastic than others about going to the country early.

The Lib Dems will be keen to capitalise on their Remain credentials while the SNP will want to cash in on the collapse in Labour support and Tory disarray in Scotland.

Some Labour figures will be wary of a Brexit election because of the party’s complex stance on the circumstances it would back a second referendum and whether it would campaign to stay or go.

Meanwhile, the Tories would have two potential headaches.

The first is whether a non-aggression pact will be agreed with the Brexit Party – if not then the Leave vote could split and let in another candidate.

The second is what will happen if the Tories sack rebel MPs who vote to block No Deal but they then stand as independent candidates, also potentially splitting the Conservative vote and clearing the way for another party to win.

And Jacob Rees-Mogg, the Leader of the House, said opposition MPs were ‘white with fear’ that an election could lead to Mr Corbyn in No 10.

Labour MPs warned their leader not to fall for a ‘trap election’ which would still give Mr Johnson the chance to leave the EU without a deal.

They are concerned that Mr Johnson will end up reneging on his promise to hold the vote on October 15, and would instead move it until after October 31 – denying Parliament the opportunity of preventing No Deal. Others are simply concerned that the Conservatives will win the election, with many Labour MPs losing their seats.

Amid the confusion over Labour’s position, Labour MP Dame Margaret Hodge said: ‘I will not be supporting a snap general election because it is nothing more than a trap set by the most untrustworthy PM in living memory.

‘This is just part of Johnson’s ploy to get a No Deal Brexit over the line regardless of the disastrous consequences. We must reject it.’ Emily Thornberry, the shadow foreign secretary, said: ‘There’s not going to be a general election tomorrow, because we’re not going to vote for it.’

But in another interview, Miss Thornberry said: ‘I’m not sure. We might vote against, we might abstain. It doesn’t matter.’

It has been claimed that Mr Johnson could respond to a defeat on a motion under the Fixed-term Parliaments Act simply by introducing a one-line bill which stated that, notwithstanding the Act, a general election will be held on October 15. That would need only a simple majority to pass, not a two-thirds one.

But now he does not have a majority in the Commons, even with the support of the Democratic Unionist Party, Mr Johnson would find it difficult to get this law passed.

Shadow Northern Ireland secretary Tony Lloyd said: ‘We are not daft enough to see a tactic dictated by PM Johnson which is designed to land us with a No Deal Brexit and to fall for that.

‘Will we fall for Boris Johnson’s trick? No, we won’t.’ Clive Lewis added: ‘For myself and many other Labour colleagues to vote for a general election – the two-thirds majority – we have to know that we have stopped our key priority, which is No Deal Brexit. 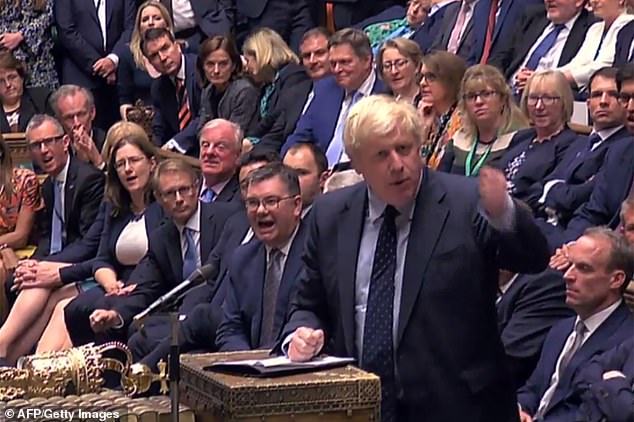 Stephen Kinnock, Caroline Flint, Gloria De Piero and 14 others said they would lay an amendment today to bring the Withdrawal Agreement back for the fourth time.

The group – Labour For A Deal – originally voted against Mrs May’s deal. The Withdrawal Agreement was rejected three times by Parliament – by a majority of 230, then 149 and finally 58 in March – resulting in Mrs May’s resignation. She sat on the backbenches yesterday, next to pro-EU former Chancellor Ken Clarke, as Mr Johnson addressed the Commons about last month’s G7 summit.

The Labour MPs said: ‘Parliament is paralysed by its extremes – those who are willing to entertain the prospect of No Deal, and those for whom no Brexit deal, however comprehensive, will ever be acceptable. We do not agree with either. We need a deal.’

‘That means the legislation has to be Boris Johnson-proof. When we’re convinced of that, then I think it’s possible we would support a general election – if it’s in the national interest.’

But Labour MP Wes Streeting called for an election. ‘The Government has lost its majority. A general election is now necessary and inevitable,’ he said.

‘We must prevent these circumstances allowing No Deal in the process. It’s the responsibility of every Member of Parliament who knows the harm a No Deal Brexit would inflict on our country.’

Mr Rees-Mogg said: ‘The Government may at any time be removed by the tried and tested motion of a confidence debate. The fact that Parliament has not been willing to go down this route… is because they do not dare have the Leader of the Opposition at the head of the government. They are afraid.

‘They are white with fear because they don’t want the honourable gentleman in 10 Downing Street.’

Downing Street strongly rejected the claim that the date of the election could be changed. Mr Johnson’s spokesman said: ‘It’s simply not going to happen. It is simply wrong to suggest that the polling date could or would be changed.’

Frank Field says he could quit the Commons to fight a by-election over Labour's anti-Semitism crisis
Chaos at Gatwick as ‘drone spotted near the airport’ SHUTS the runway
A bright home can trick your body clock and leave you feeling tired and groggy, experts say
David Bowie demo of 'Starman' is up for auction after it was abandoned in a loft for FIFTY years
Grand National 2019 racing at Aintree LIVE - Final day racecard, runners, favourites and more
US warns there are 'ongoing terrorist plots' in Sri Lanka
Katya Jones 'AXED from main Strictly line-up' after her Seann Walsh kiss
Man arrested for making explosives and possessing bullets