Recent homebuyers in notoriously pricey parts of the country like the South East of England could end up in negative equity in the event of a no-deal Brexit, new findings suggest.

If Britain leaves the EU without a deal, average property prices across the country will drop by around 6 per cent next year, a new analysis by accounting giant KPMG claims.

But, in the worst case no-deal scenario, average prices could tumble by between 10 to 20 per cent, the research suggests. 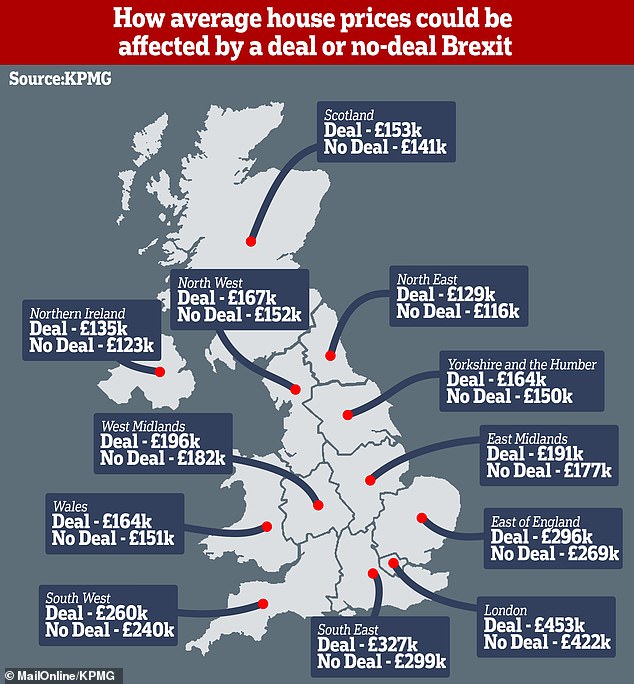 Deal or no-deal? Predicted average property prices by the end of 2020 in the event of a deal-or-no-deal Brexit

House prices in London and the South East have been falling slowly in since the referendum vote in June 2016.

While some buyers have seized the opportunity to snap up a home in these expensive areas for less than they would have a few years ago, they could end up being stung for a period of time if Britain suffers a ‘disorderly’ EU exit.

Yael Selfin, chief economist at KPMG UK, told This is Money: ‘If we see a fall in confidence, as a result of a no-deal Brexit disruption, and a decline in households’ real income due to higher inflation eating into smaller wage rises, that could see house prices in the South East fall by 0.6% this year and by 6.7% in 2020.

‘So anyone who bought a home recently will likely find themselves in negative equity at least in the short-term until prices pick up again.’

However, this would only apply to those who bought with small deposits – but 95 per cent loan-to-value mortgages have become more common in recent years.

In KPMG’s worst-case scenario of 10-20 per cent falls in property values, many more homeowners could fine themselves in negative equity. 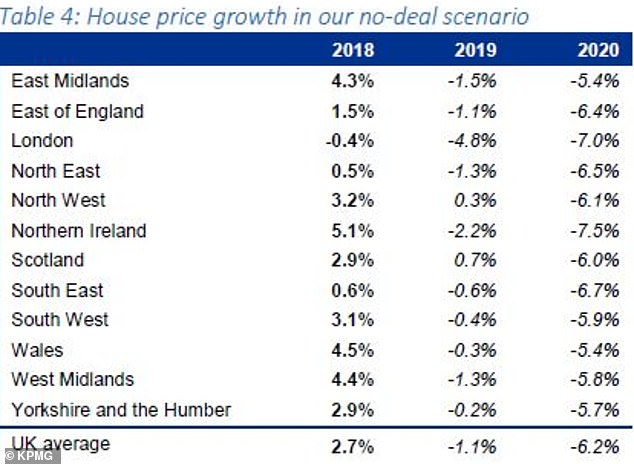 Variations: House price growth predictions in the event of a no-deal Brexit

Conversely, property guru and buyer agent Henry Pryor, told this is Money his clients are more worried about a possible General Election, than a no-deal Brexit.

Pryor said: ‘My clients fear the outcome of the inevitable General Election far more and the impact of a possible Corbyn led Labour Government. Whilst property has traditionally done well under Labour administrations, it’s clear that Mr Corbyn’s version of Socialism scares the property world far more than what occurs at Halloween.’

What does it mean to be negative equity?

In essence, this is where the value of a home falls to below the amount of money owed as a mortgage.

Levels of negative equity vary depending on where house prices in the country are dropping.

Being in negative equity can be a real headache for homeowners wanting to sell up.

In the event of a no-deal Brexit, KPMG’s latest findings suggest property prices in London could fall by 7 per cent, or around £30,000, by the end of next year. Average prices could fall from to around £422,000, while if a deal gets thrashed out, prices would stick around at the £453,000 mark.

Northern Ireland could be even harder hit if a no-deal Brexit goes ahead, with the average cost of a home potentially falling by as much as 7.5 per cent as 2020 draws to a close.

The South East of England, where prices have been dropping off in recent years, could see the average cost of a home fall by around 6.7 per cent in the event of a no-deal Brexit.

If no deal is reached, average house prices in the South East could end up at around the £299,000 mark by the end of next year, while if a deal is pushed through, the figure would be closer to £327,000.

A no-deal Brexit could, according to the findings, trigger house prices to fall by around 6.2 per cent nationally, but some areas will be hit harder than others. 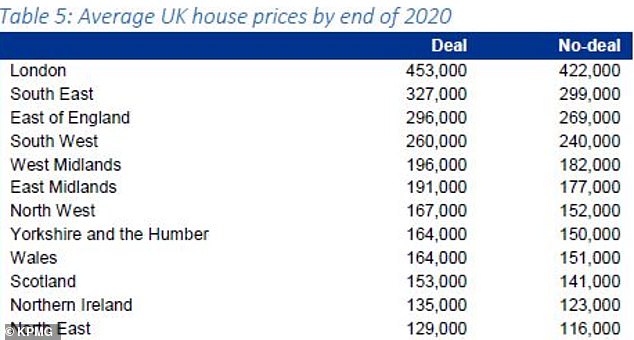 Predictions: KPMG’s predictions for house prices in the event of a deal or no-deal Brexit

If a Brexit deal is reached before 31 October, KPMG predicts average prices will stabilise this year and rise by 1.3 per cent in 2020.

In this scenario, the UK’s economy enjoys a small uplift, with GDP growth rising to 1.5 per cent in 2020, the findings suggest.

Last year, the Bank of England, which has often been criticised for its gloomy post-Brexit predictions, warned that a no-deal scenario could send house prices dwindling by a third.

This year, the Bank’s Governor Mark Carney re-iterated his stance, warning that UK house price growth was ‘guaranteed’ to fall if Britain exists the EU without a deal.

In July this year, the Office for Budget Responsibility said a no-deal Brexit would lead to house prices falling by nearly 10 per cent by mid-2021.

Since the 1990s, Britain has suffered two hefty house price corrections. The first took place in the early 1990s and was linked to the recession in 1991, when house prices fell by 20 per cent between 1989 and 1993. At this time, getting a mortgage was considerably more expensive than it is now.

The other major house price drop occurred during the global financial crisis of 2008, when the average cost of a home dropped by 15 per cent.

KPMG’s research also warns that the number of homes changing hands could fall even more sharply than prices in the event of a no-deal Brexit.

According to Jan Crosby, KPMG UK’s managing director, falling transaction volumes could make government housing delivery targets ‘impossible’ to achieve and the construction of new homes would slow down.

Selfin said: ‘Looking ahead to 2020, it promises to be a delicate year for the housing market.

‘Even if Brexit can be resolved relatively smoothly, the travails of the global economy will impact growth in the UK, making prospects for house prices relatively subdued.

‘A potential upside for the housing market could come from current government plans to change stamp duty such as shifting the burden from the buyer to the seller, which if delivered in time for the Autumn Statement, could lead to a potential increase in demand from buyers, providing a short-term boost to the housing market.’