The German far-right made strong gains in a pair of state elections in eastern Germany, but their opponents from the political mainstream also won both votes to hold off the radical insurgency.

Despite the AfD (Alternative for Germany) leader declaring ‘things can’t go much better than this’ after Sunday’s results, the traditional parties salvaged their position as the top vote-getters and provided some relief for Angela Merkel’s national government.

All eyes were on the performance of the far-right AfD, which is strongest in the ex-communist east, and on how badly Germany’s governing parties would do after a rough 18 months for Chancellor Angela Merkel’s coalition in Berlin.

In Saxony the AfD took 27.5 per cent of the vote, which was its best performance yet in any state election while Merkel’s centre-right Christian Democratic Union won 32.1 per cent.

Voters in Saxony, a region of around 4.1 million people bordering Poland and the Czech Republic, and neighbouring Brandenburg, which has 2.5 million inhabitants and surrounds Berlin, elected new state legislatures.

A symbolically important AfD win in either state could have further destabilised the national government. 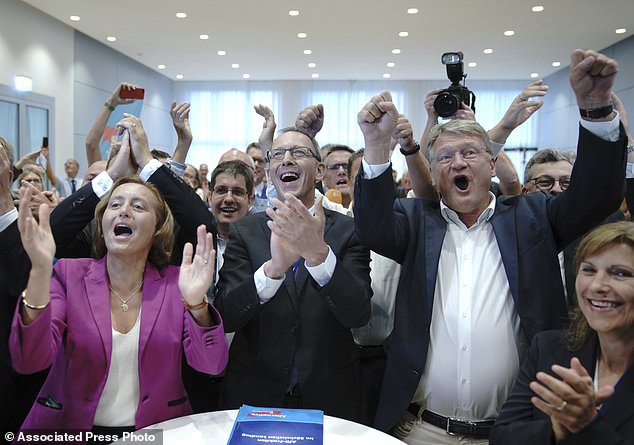 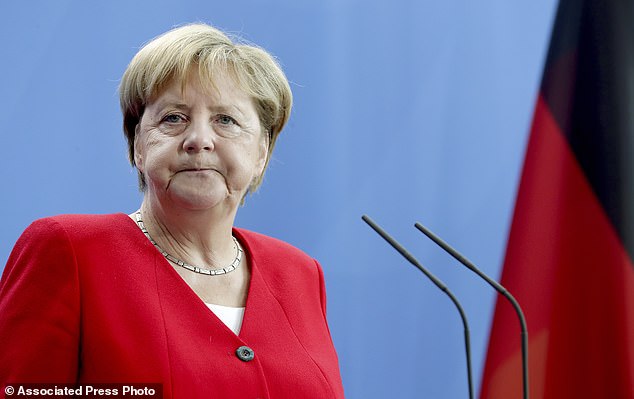 AfD co-leader Joerg Meuthen declared himself ‘highly satisfied’ with the outcome, saying that ‘things can’t go much better than this.’ But opponents voiced some relief that his party was held to second-place finishes.

‘The good signal in both states is that a few weeks ago the far-right was ahead, and today there was a clear signal against AfD,’ said Lars Klingbeil, the general secretary of the centre-left Social Democrats, Merkel’s junior partners in Berlin.

‘People don’t want AfD to be the strongest party there, but nevertheless it is a task for all democratic parties to see how we push them back,’ Klingbeil added. ‘These election results are much too high.’

The governing parties performed better than pre-election polling predicted. However, both lost ground compared with the last state elections in 2014 – before the migrant influx that boosted AfD’s support and helped it into Germany’s national parliament in 2017.

Merkel’s centre-right Christian Democratic Union won 32.1 per cent of the vote in Saxony, which it has governed since German reunification in 1990, down from 39 per cent five years ago.

AfD took 27.5 per cent, which was its best performance yet in any state election and compares with 9.7 per cent five years ago.

In Brandenburg, the Social Democrats won 26.2 per cent of the vote, down from 31.9 per cent five years ago.

Like the CDU’s showing in Saxony, it was their worst performance there in 29 years of democracy. The Social Democrats have led Brandenburg since reunification. 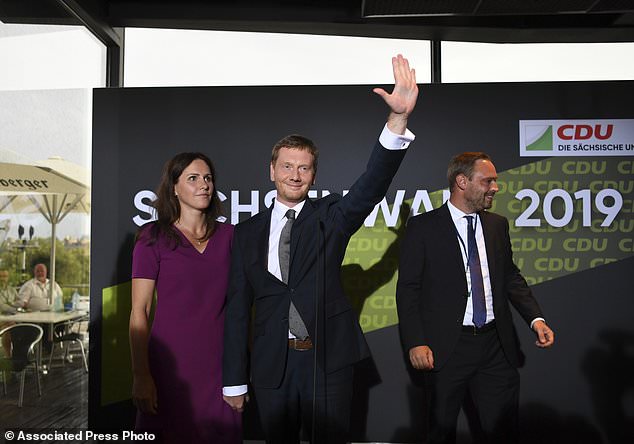 Governor of Saxony Michael Kretschmer (centre) waves to supporters beside his partner Annett Hofmann (left) at an election party in Dresden, on Sunday 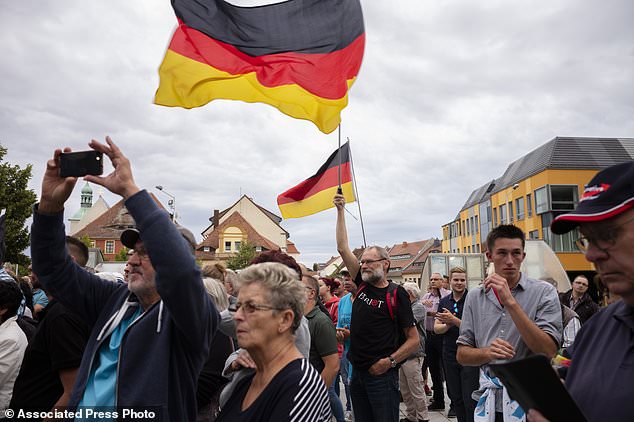 A crowd of people attend an election campaign rally of German Alternative for Germany, AfD, party for the Saxony state elections in Bautzen, Germany

Some voters may have returned to the big traditional parties to prevent AfD from winning.

The Greens, who have traditionally struggled in the east but surged in national polls over recent months, made only fairly modest gains Sunday, taking 8.6 per cent in Saxony and 10.8 per cent in Brandenburg. The environmentalist party may, however, be needed to govern both regions.

Merkel’s CDU and the Social Democrats govern Germany together in a fractious national coalition, and both are weak in national polls.

In Saxony and Brandenburg, they face the task of putting unwieldy new governing alliances together, as the coalitions both lead appeared to have lost their majorities.

Mainstream parties have pledged not to form coalitions with the six-year-old AfD, which in any case has thrived on opposition.

Bernd Baumann, its chief whip in the national parliament, said it ‘pushes the issues forward that really interest people out there.’ 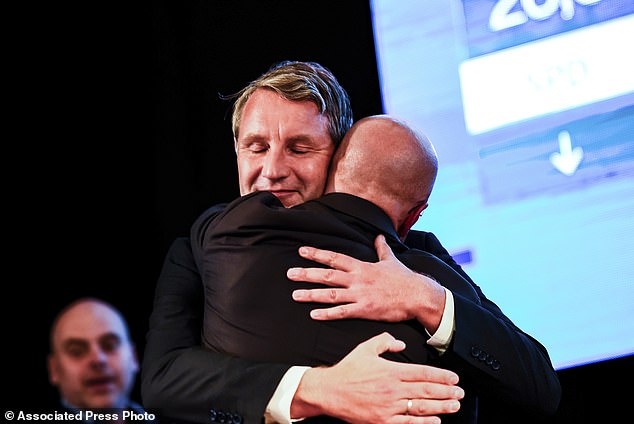 Top candidate of right-wing party Alternative for Germany, AfD, for the elections at the federal state Brandenburg Andreas Kalbitz, (right) is embraced by AfD Thuringia chairman Bjoern Hoecke at an election party in Werder, near Potsdam, on Sunday 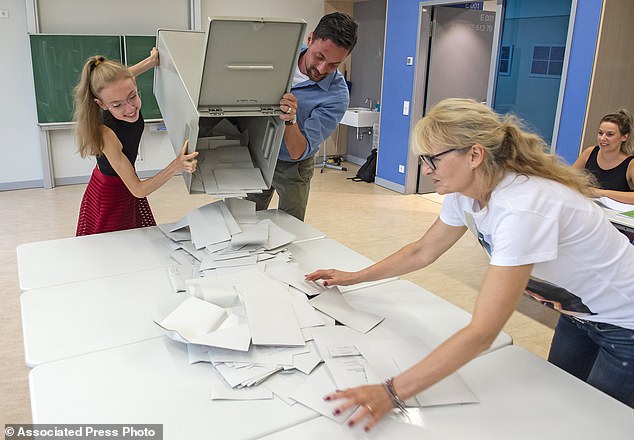 Election workers open one of the ballot boxes during the procedure for counting votes in a polling station, the secondary school Buehlau, in Dresden, eastern Germany, on Sunday

‘I am glad that more and more people in the country say, ‘We will take our country back from the left-wing, green mainstream, from the old parties to certain media,” he said.

Saxony has long been a hotbed of far-right groups. It is not only an AfD stronghold, but also the state where the anti-migration group PEGIDA -Patriotic Europeans against the Islamization of the West – rose to prominence with weekly protests in Dresden at the height of the 2015 migration crisis.

More broadly, AfD has tapped into disillusionment in the east, particularly in rural areas, among people who feel left behind after nearly three decades of German unity.

Promises of equal living standards did not always become reality, salaries in the east still lag behind those in the west and many young people have left to seek opportunities elsewhere.

In comparison, AfD took 11 per cent of the vote nationwide in the European Parliament election in May.