At least 54 migrants are understood to have been discovered at dawn by Border Force crossing to Kent beaches today.

They are believed to have arrived in a number of small vessels and were taken by officers for questioning at Dover.

Kent Police said eight people arriving in a dinghy on the shore at Kingsdown have been passed to immigration officers.

The Coastguard is reported to be carrying out search and rescue operations for ‘a number of incidents’ on the Kent coast this morning. 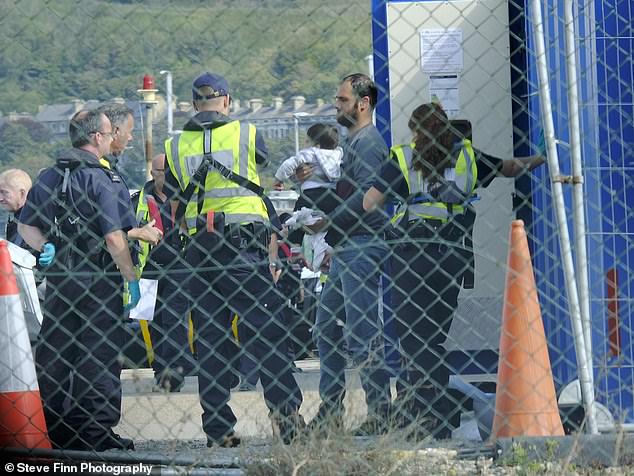 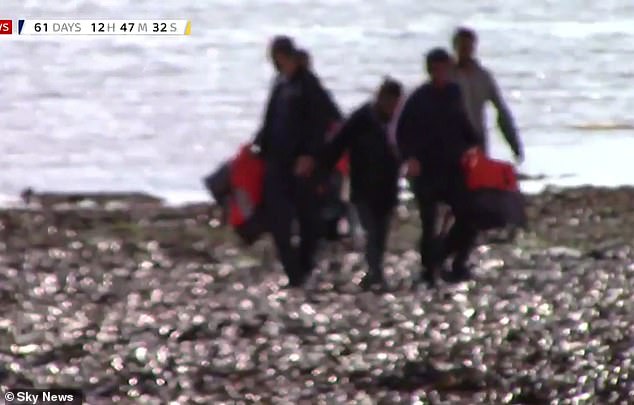 A group of migrants make their way ashore today. Kent Police said eight people arriving in a dinghy on the shore at Kingsdown have been passed to immigration officers. 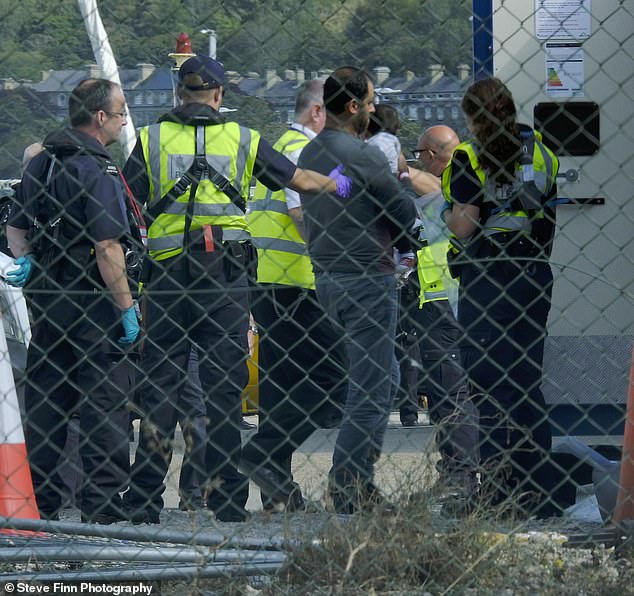 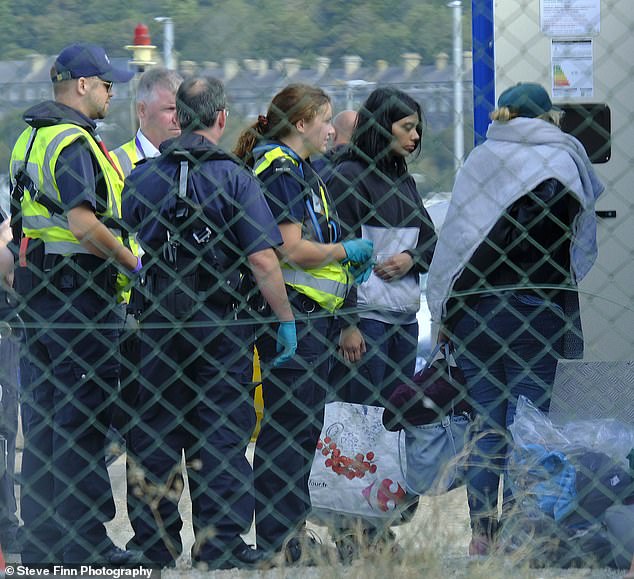 Rescue teams were sent from Folkestone and Deal to help with the operation.

Kent Police and the South East Ambulance Service have also been assisting with the operation.

Their spokeswoman said that crews are concerned with ‘rescuing those in trouble and bringing them safely back to shore, where they will be handed over to the relevant partner emergency services or authorities’.

She added: ‘HM Coastguard has been coordinating a search and rescue response to a number of incidents on the Kent coast, working with Border Force, Kent Police and other partners.’

By Friday more than 220 migrants, including at least 40 children, had been intercepted by UK and French authorities since Thursday last week. 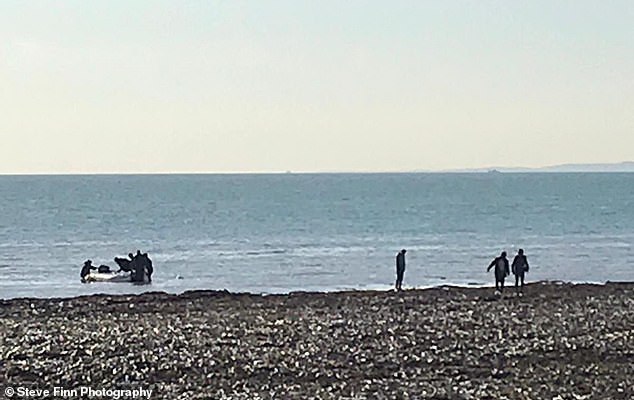 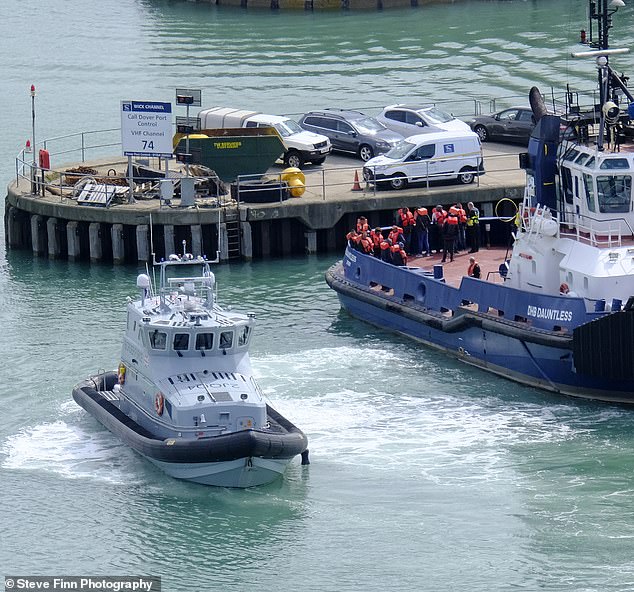 A Border Force vessel at Dover this morning, migrants can be seen on an adjacent ship wearing red life jackets 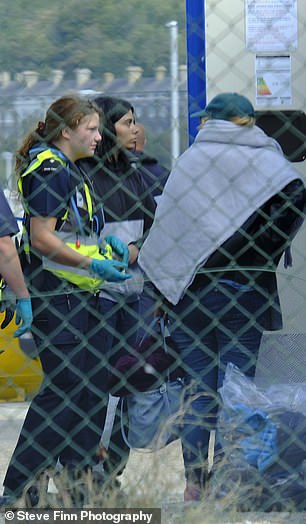 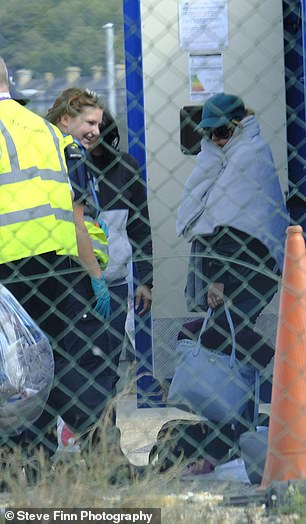 Two women being processed by officers at Dover this morning

Home Secretary Priti Patel said on Friday that urgent action is needed to tackle the migrant crisis in the Channel, adding that plans are being drawn up ‘immediately’ to deal with the problem.

Her comments came following a meeting with French interior minister Christophe Castaner in Paris on Thursday, where the pair agreed to step up resources to intercept and stop the wave of crossings in small boats.

The prospect of British financial support for efforts to stem the flow of crossings from France was discussed at the meeting, according to the French AFP news agency, and Mr Castaner said that money from London would ‘reinforce patrols and improve effectiveness’.

Last week Prime Minister Boris Johnson warned illegal migrants they would be sent back if they risked crossing the Channel.

He said: ‘If you come illegally, you are an illegal immigrant and I’m afraid the law will treat you as such.’ 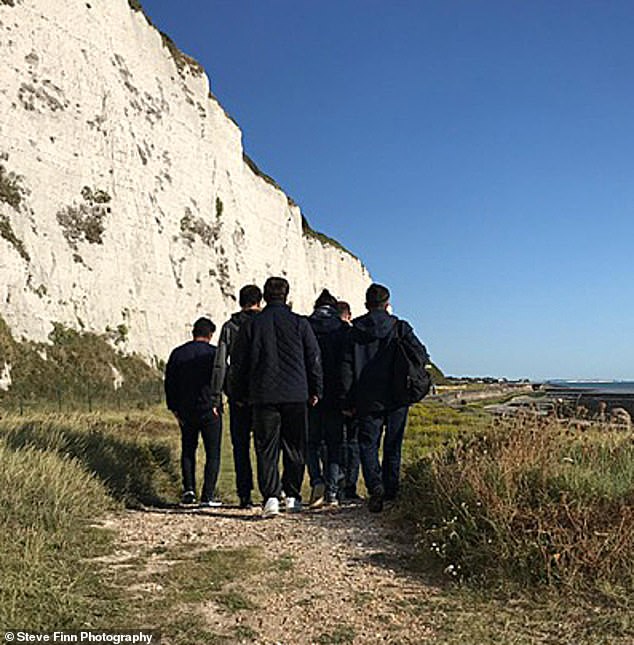 A huddle of migrants walk up the Kent coastline this morning as they joined more than 1,000 so far this year in reaching Britain from France 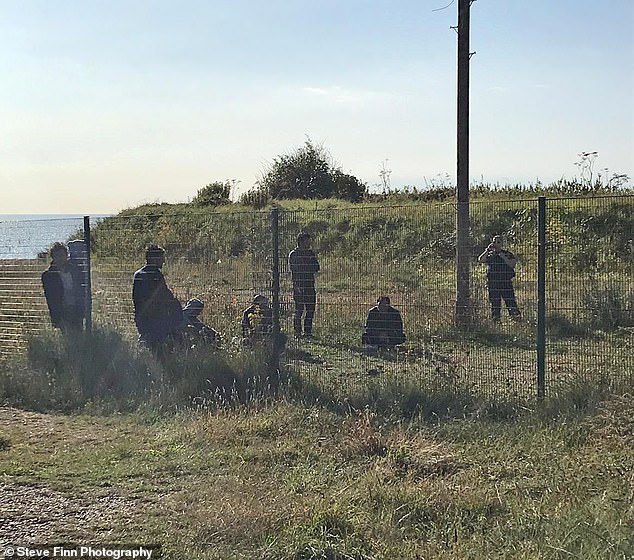 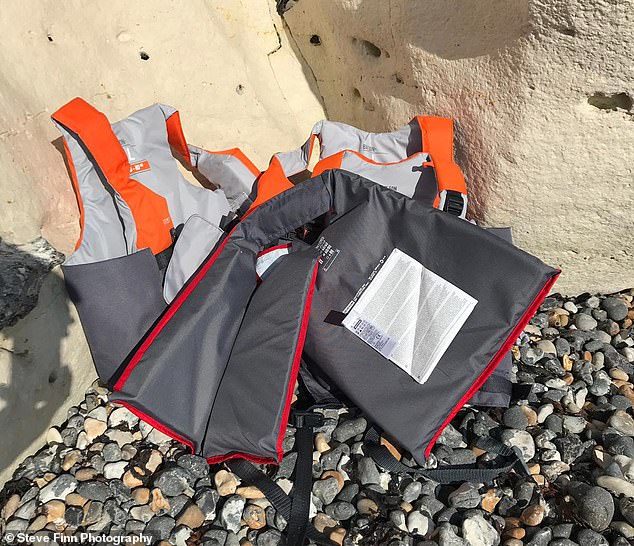 The total number of migrants who have made it across the Dover Strait – the world’s busiest shipping lane – has exceed 1,000 already this year, despite millions being spent on security measures to prevent crossings.

Most of the migrants claim to be either Iran or Iraq nationals.

On the other side of the water today 13 migrants were rescued in the English Channel attempting to reach Britain.

The 13 migrants, all men, were rescued by the coast guard and brought to the port of Calais where they were handed over to border police.

Since January, some 1,450 migrants have been rescued either by British or French coastguards – more than double the number who tried to cross the busy shipping lane in the whole of 2018, according to official French figures released Monday.

France has attributed the increase to good summer weather, which has emboldened more migrants to make the journey. 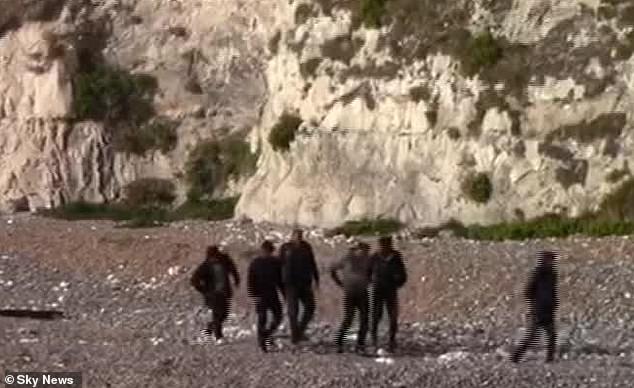 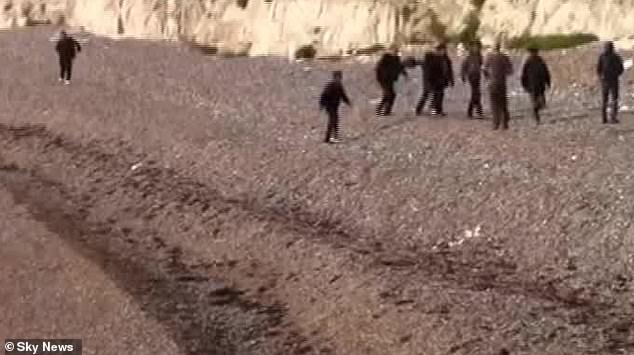 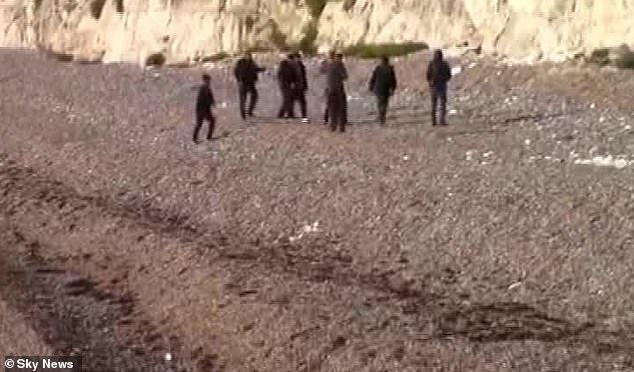 Nine migrants are seen here having made land at Kingsdown Beach 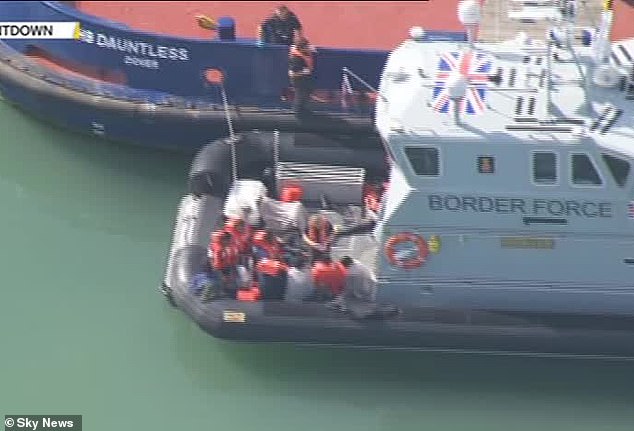 However, such crossings are dangerous given the heavy maritime traffic in the Channel as well as strong currents and cold water.

The body of an Iraqi migrant who tried to swim across the Channel to Britain was found off Belgium’s coast earlier this week, wearing a makeshift life jacket made of empty plastic bottles.

Officials believe the 48-year-old drowned after setting off from a beach in northern France, with currents dragging him into Belgian waters.

Afghan chief rejects resignation letters from spy...
George H.W. Bush makes his final journey home as his casket arrives at St. Martin’s Episcopal Church
The Pope REALLY doesn't want anyone to kiss his ring
Beauty experts are in a frenzy over $55 eye cream that is so popular one sells every THREE MINUTES
Theresa May's day of disaster hour by hour by Jack Doyle
Extinction Rebellion give Wimbledon fans lessons on the dangers of plastics in the ticket queue
Son, 27, who viciously bullied his parents is jailed for three years
Fears of global trade war with China after Beijing slaps an 80 per cent tariff on Australian exports