Hurricane Dorian has the potential to be one of the worst storms to hit Florida in decades, meteorologists warn.

The storm continued his ominous path on Thursday churning in the Atlantic and heading towards the northern Bahamas and Florida’s eastern coast – as it’s expected to escalate into a dangerous Category 3 storm by the time it makes landfall early next week.

Dorian was upgraded from a tropical storm to a hurricane on Wednesday, prompting Florida Governor Ron DeSantis to declare a state of emergency.

Officials have warned residents across the state to stock up on a week’s worth of supplies and to be prepared to evacuate when advised.

An update from the National Hurricane Center at 8am EST on Thursday warned that Dorian could start to hit parts of Florida as early as Saturday evening.

‘This could be the strongest hurricane to hit Central Florida in over 30 years,’ Fox 35 Orlando meteorologist Glenn Richards said. ‘Hurricane force sustained winds would be carried across the entire width of the state if the current forecast holds.’

President Donald Trump tweeted on Thursday morning: ‘Puerto Rico is in great shape with Hurricane Dorian taking a largely different route than anticipated. Thank you to FEMA, first responders, and all, for working so hard & being so well prepared. A great result! The bad news, Florida get ready! Storm is building and will be BIG!

‘Hurricane Dorian looks like it will be hitting Florida late Sunday night. Be prepared and please follow State and Federal instructions, it will be a very big Hurricane, perhaps one of the biggest!’ 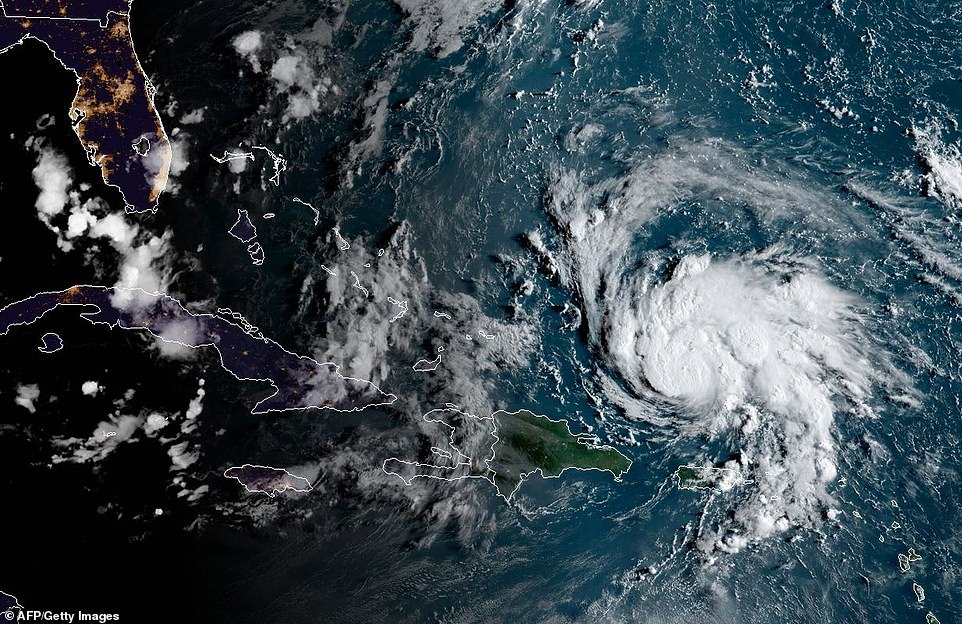 Hurricane Dorian pictured Thursday as it barrels past Puerto Rico, sparing the island, and heads towards the northern Bahamas and Florida’s east coast, leading Florida Governor Ron DeSantis declared a state of emergency on Wednesday 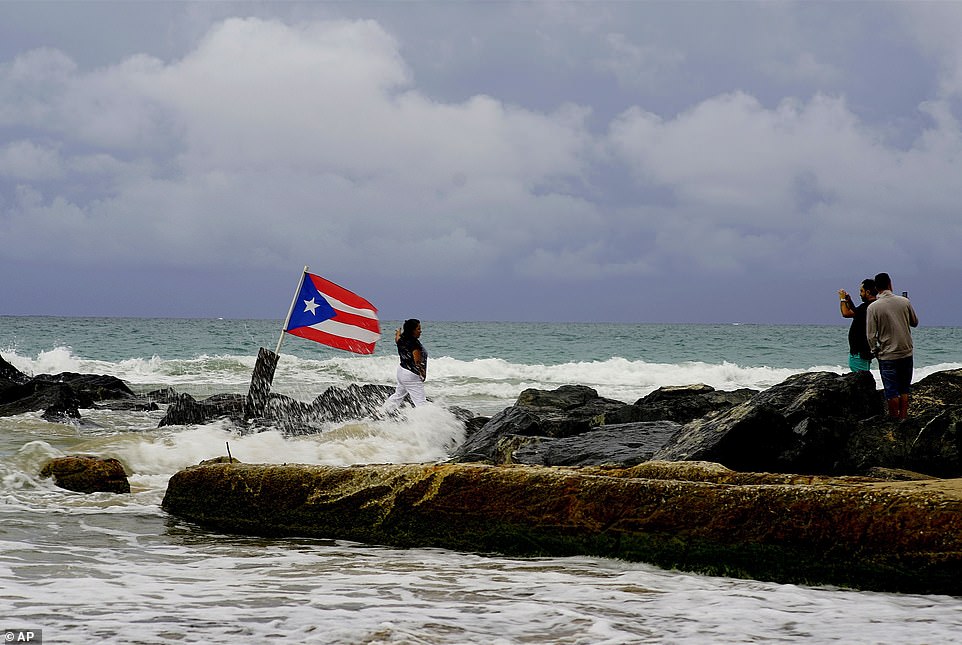 Dorian was expected to hit Puerto Rico on Wednesday but passed to the east of the territory, leaving it unscathed. Locals are seen waiting for the storm to arrive in San Juan 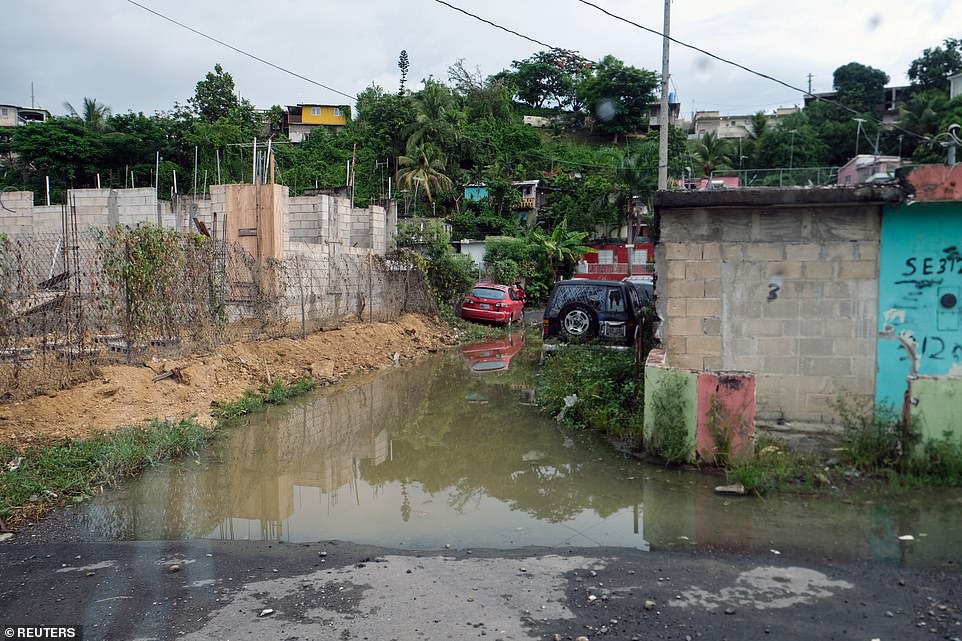 Safe: Puerto Rico was hit with just a bit of rain as Dorian approached its northeast region but didn’t make landfall. A flooded road in Canovanas on the island pictured above

As of Wednesday evening, Dorian was located 60 miles northwest of San Juan, Puerto Rico. The Category 1 storm, with winds clocking in at 80mph, is moving northwest at about 13mph.

The official NHC forecast predicts it will reach major hurricane strength by the weekend, with a 31 percent chance of being upgraded to Category 4 by Friday afternoon.

Meteorologists say it could still be a Category 2 storm by the time it passes over the Orlando area, which is at the center of the current projected path, on Monday afternoon.

The 400-mile cone of uncertainty indicates that it could be anywhere from coastal Georgia to the southern tip of Florida to Florida’s west coast by that time.

President Donald Trump tweeted on Thursday morning: ‘Puerto Rico is in great shape with Hurricane Dorian taking a largely different route than anticipated. Thank you to FEMA, first responders, and all, for working so hard & being so well prepared. A great result! The bad news, Florida get ready! Storm is building and will be BIG! Hurricane Dorian looks like it will be hitting Florida late Sunday night. Be prepared and please follow State and Federal instructions, it will be a very big Hurricane, perhaps one of the biggest!’ 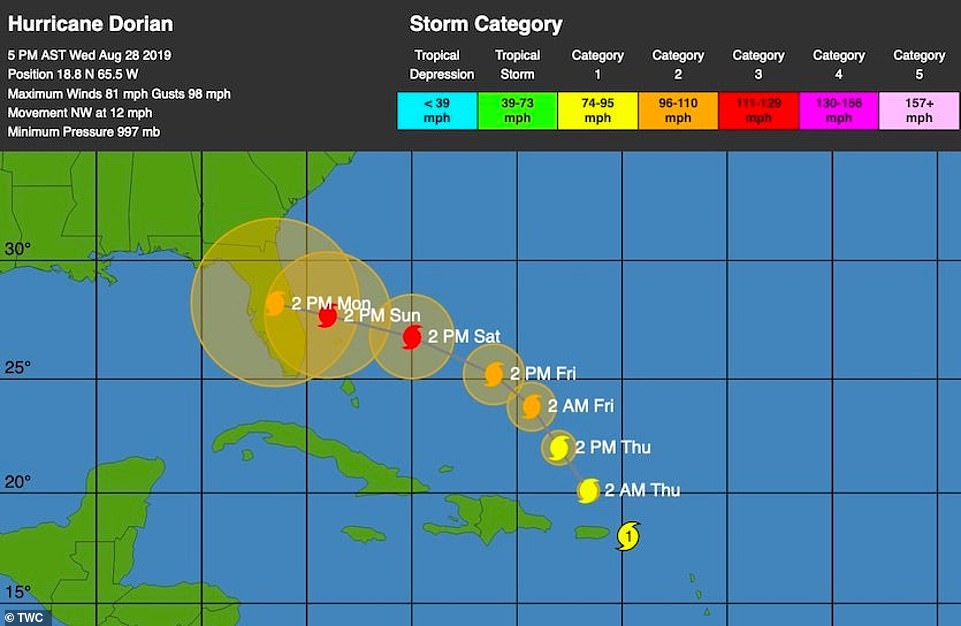 Hurricane Dorian is expected to strengthen as it barrels across warm Atlantic waters toward Florida’s eastern coast, the National Hurricane Center warned on Wednesday night. A rough trajectory for the storm is shown above 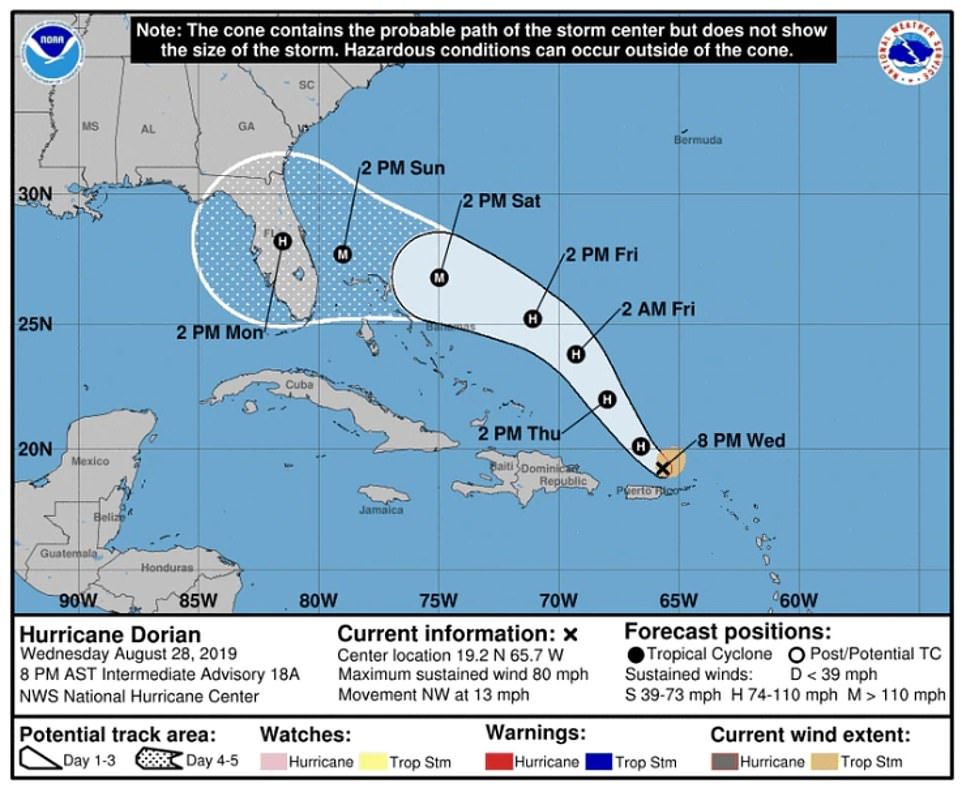 An update from the National Hurricane Center at 8pm EST on Wednesday (above) indicated that the ‘dangerous’ storm will sweep across Florida from the east, arriving sometime late Sunday or early Monday 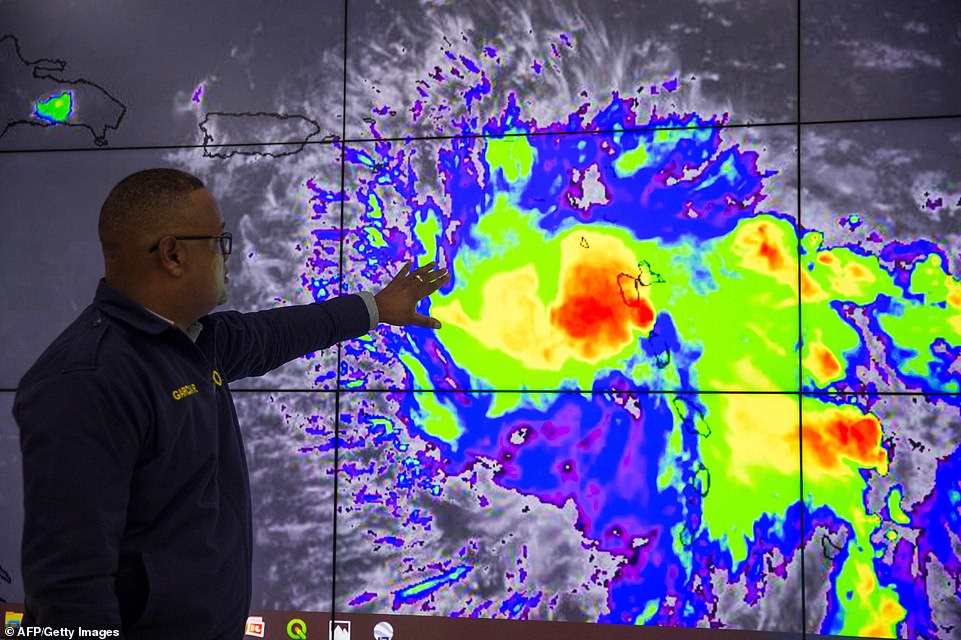 In Central Florida, residents are taking official advice and preparing for the worst possible outcome.

Some grocery stores reported that their stock of bottle water and other supplies has already taken a hit, according to the Orlando Sentinel.

The Florida Department of Emergency Management tweeted a lengthy checklist of supplies to have on hand on Wednesday.

The University of Central Florida, where fall semester classes just started Monday, has urged students living on campus to prepare to move to safer off-campus locations if the storm continues on its projected track.

In East Orange County, officials handed out shovels and bags on Wednesday for residents to make their own sandbags. By late afternoon nearly 7,000 bags had been filled, the Sentinel reported.

On the coast, Kennedy Space Center and Cape Canaveral Air Force Station are working to secure multimillion-dollar equipment before the storm makes landfall.

Cruise lines operating out of Port Canaveral are adjusting schedules to keep boat traffic to a minimum. 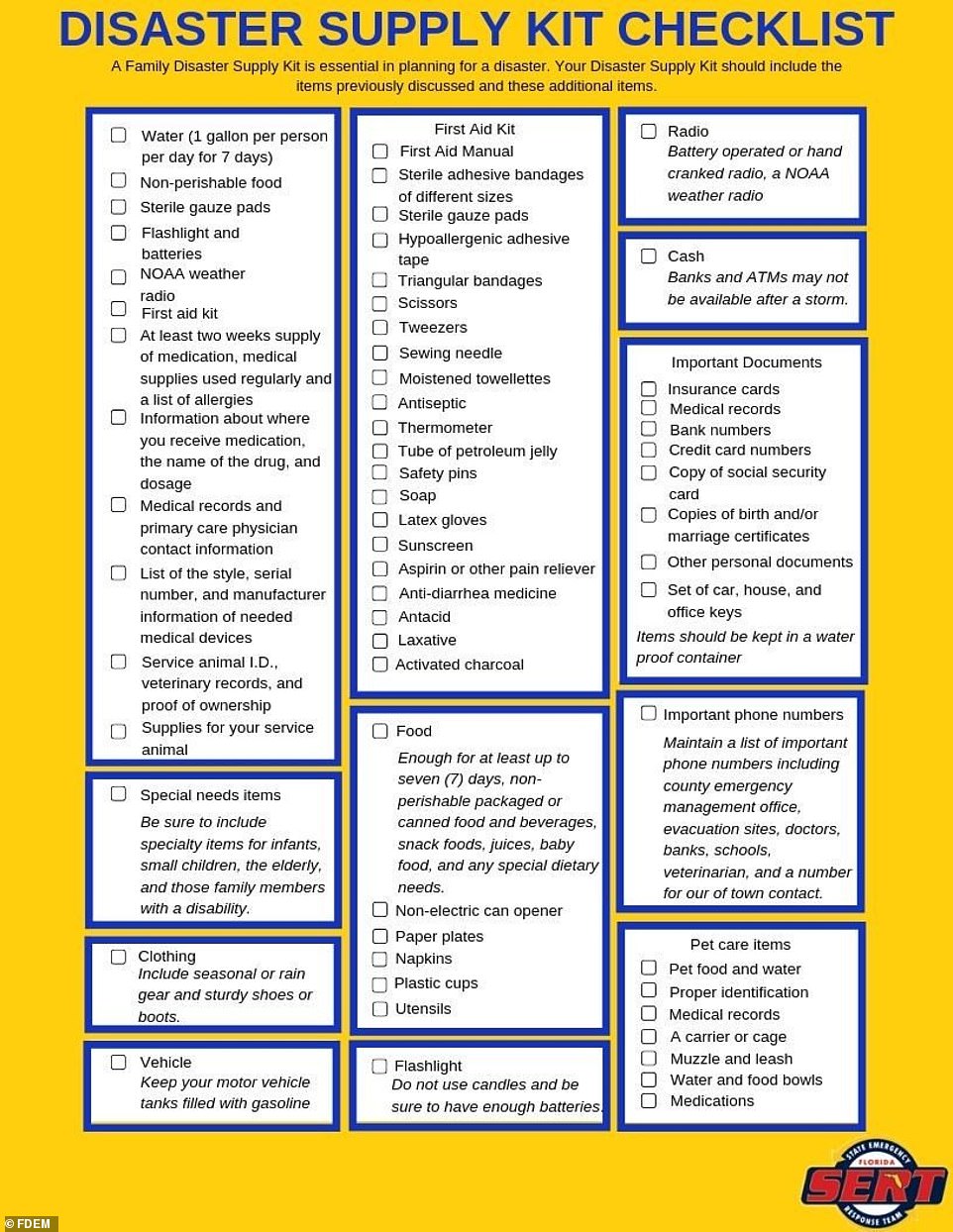 Dorian left some damage in its wake as it carved its way across the Caribbean as a tropical storm.

Power outages and flooding were reported across the US Virgin Islands, the British Virgin Islands and the Puerto Rican islands of Vieques and Culebra after Dorian hit St Thomas as a Category 1 storm.

‘We’re happy because there are no damages to report,’ Culebra Mayor William Solís told The Associated Press, noting that only one community lost power.

In addition, the storm downed trees and at least one electric post in St Thomas, he said, adding that there were no reports of major flooding.

‘We are grateful that it wasn’t a stronger storm,’ he said.

There were no immediate reports of damage in the British Virgin Islands, where Gov Augustus Jaspert said crews were already clearing roads and inspecting infrastructure by late Wednesday afternoon. 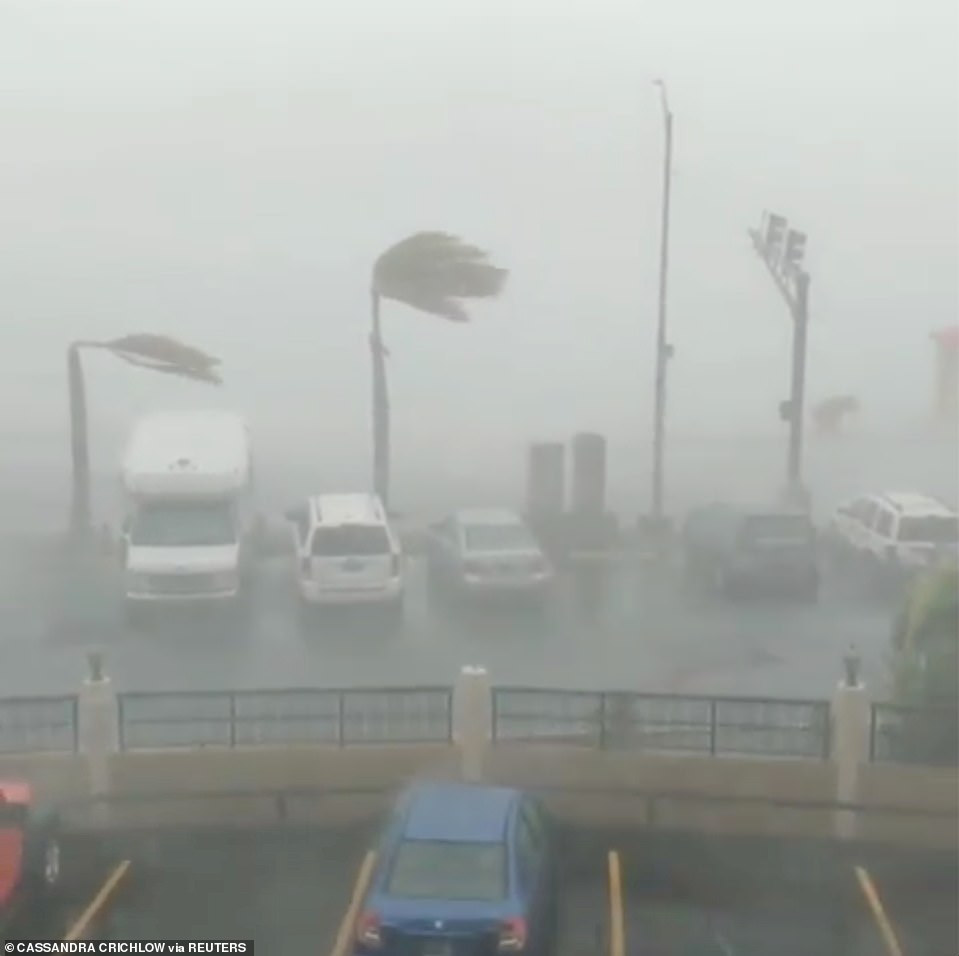 Dorian appears to have largely spared Puerto Rico, passing over the top of the US territory that is still recovering from a powerful storm two years ago.

The National Hurricane Center (NHC) in Miami said the hurricane watch and tropical storm warning for the island had been lifted, and that ‘Dorian continues to move away from Puerto Rico and the Virgin Islands.’

Vazquez announced that schools would reopen and people should return to work from Thursday. She said the storm had given the island a chance to evaluate its hurricane response.

‘These days have been a real exercise where we have been able to re-evaluate and make adjustments in all our responses to protect the people of Puerto Rico,’ she said.

President Donald Trump had declared an emergency in the territory on Tuesday night and ordered federal assistance for local authorities. 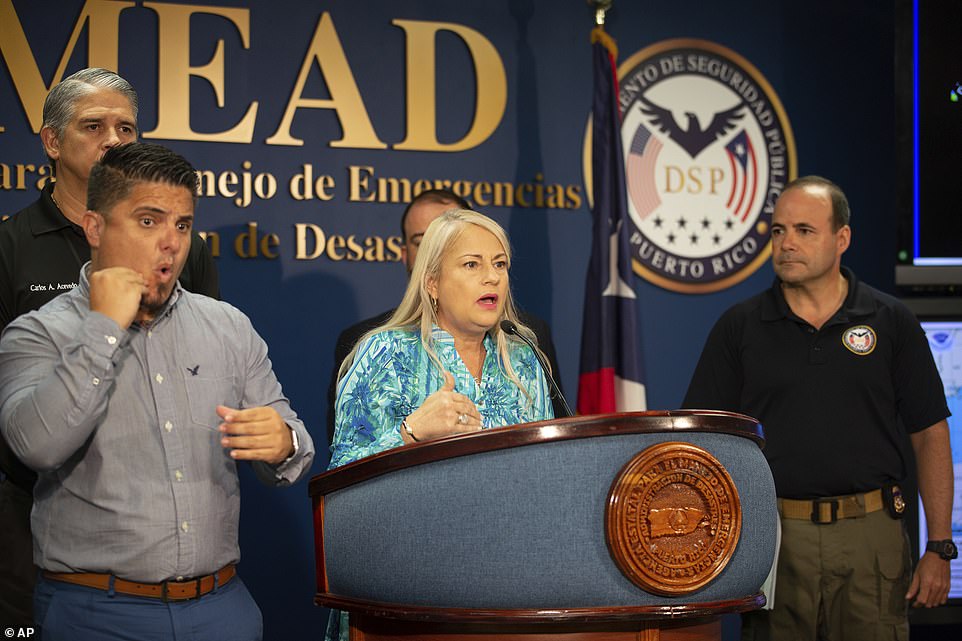 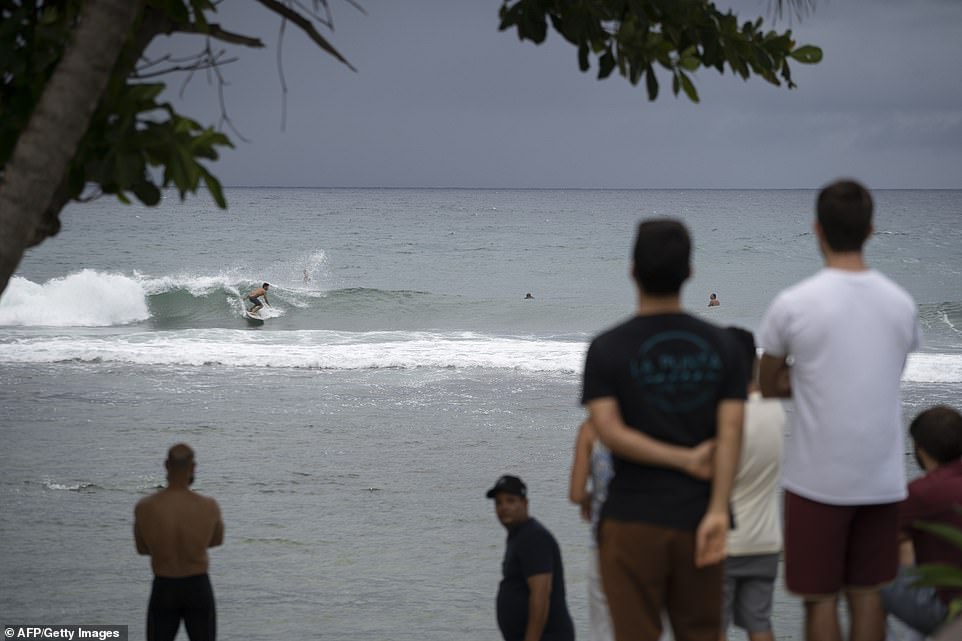 The storm was expected to pass over or near Puerto Rico on Wednesday. People are seen gathered at the coast of Patillas 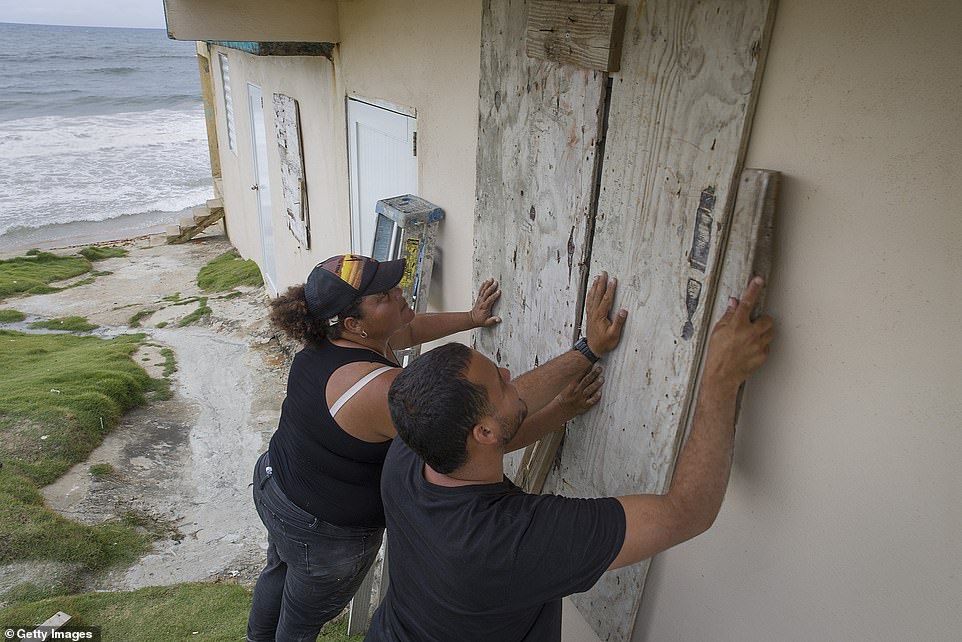 Residents of Yabucoa, Puerto Rico, are seen boarding up their windows to protect against potentially disastrous winds

At the time it was the most destructive hurricane to ever batter Florida where it made landfall with windspeeds as high as 165mph, killing 65 people and causing $27.3billion in damage

Hurricane Irma: Irma was the strongest observed hurricane in the Atlantic causing at least 134 deaths in September 2017

This Category 5 hurricane hit the Leeward Islands, the northeastern Caribbean and the Florida Keys

Hurricane Michael: This category 5 hurricane was the first to strike the contiguous United States since Andrew in 1992

It reached peak winds of 160mph before it made landfall near Mexico Beach, Florida