Boris Johnson condemned a ‘coalition of anti-democrats’ last night after opposition parties banded together in a new attempt to block a No Deal .

secured the support of five other parties yesterday in his bid to further delay Britain’s departure from the EU.

The five other leaders had forced the Labour leader to drop his preferred option of tabling a vote of no confidence.

Instead, the opposition groups agreed to prioritise passing a law to extend Article 50 again.

Last night, Mr Corbyn wrote an extraordinary plea to dozens of Tory MPs urging them to defy their leader. His letter – to 116 Tory and independent MPs, including Theresa May and Philip Hammond – asked them to support efforts to block a No Deal Brexit.

But No10 hit back, warning that the MPs were ‘sabotaging’ the UK’s negotiating position and ignoring the will of the people.

A source said: ‘We are now making progress because our European partners realise we are serious about leaving the EU on October 31 – no ifs, no buts. 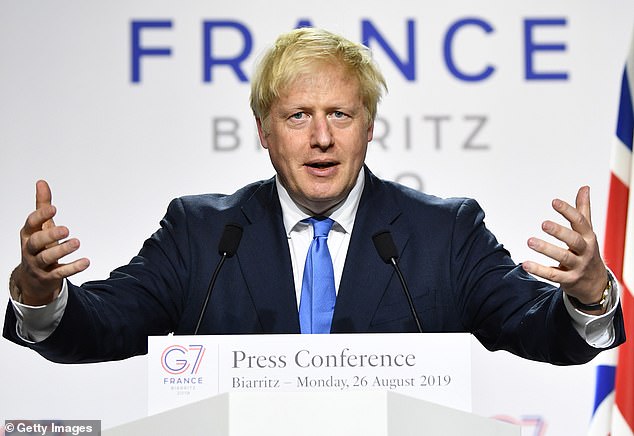 Today a Downing Street spokesman said: ”It’s utterly perverse that Corbyn and his allies are actively seeking to sabotage the UK’s position’ 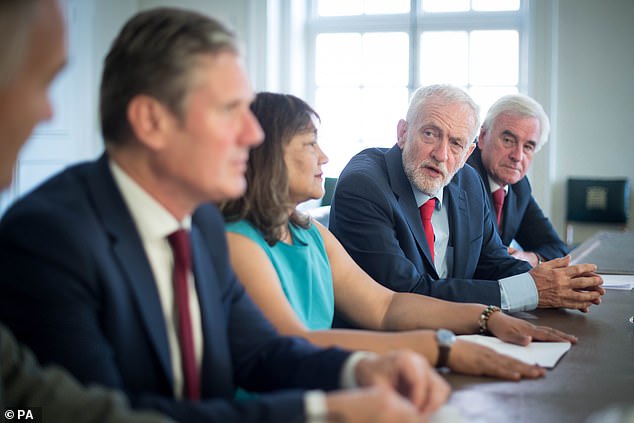 ‘It’s utterly perverse that Corbyn and his allies are actively seeking to sabotage the UK’s position.

‘This coalition of anti-democrats should be honest with the British public, they are against us leaving the EU no matter what. The Government believes politicians don’t get to choose which public votes they respect.’

Mr Johnson tweeted that ‘the referendum result must be respected’ and restated his commitment to the October 31 date.

The five other parties forced Mr Corbyn to abandon his preferred plan of tabling a no confidence vote.

He had hoped they would support him as a caretaker prime minister in a so-called government of ‘national unity’.

That idea, however, met considerable resistance, with opposition figures calling for a compromise candidate who would be more likely to command a cross-party Commons majority as an interim prime minister. 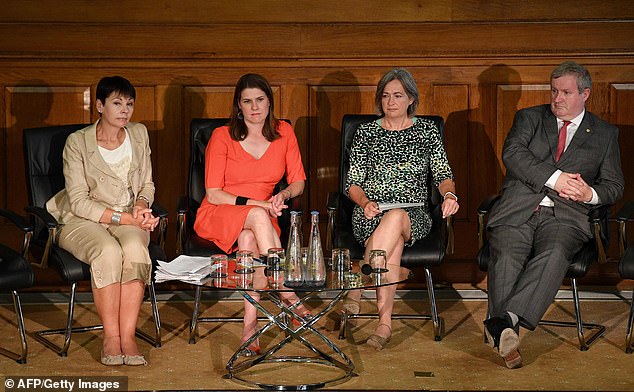 Instead the leaders – who all voted against Mrs May’s Brexit deal – agreed to prioritise legislation to force Mr Johnson to extend Article 50 again before the current October 31 deadline.

The attendees discussed ways of seizing control of the Commons agenda to pass such a law, as well as moves to stop Mr Johnson from proroguing Parliament and to force him to publish elements of the contingency planning for leaving the EU without a deal.

Mr Corbyn said: ‘We are putting first the legislative proposal next week and that’s what the agreement was reached this morning to do, that’s what we are doing.

‘The motion of no confidence will be put, by me, at an appropriate time but obviously not the first item next Tuesday because I believe it’s important we get on with a legislative process which prevents the Prime Minister acting in defiance of the will of Parliament… [Mr Johnson] needs to respect Parliament and understand [its] role is to question and challenge the executive.’ 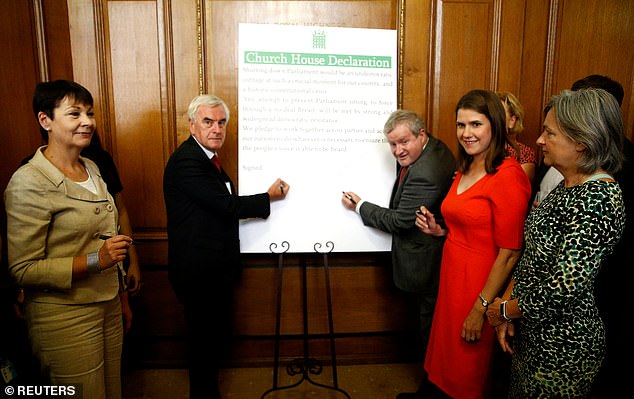 John McDonnell and Ian Blackford, flanked by Caroline Lucas and Jo Swinson, pose for a photograph before signing the ‘Church House Declaration’ promising to oppose any attempt to prorogue Parliament 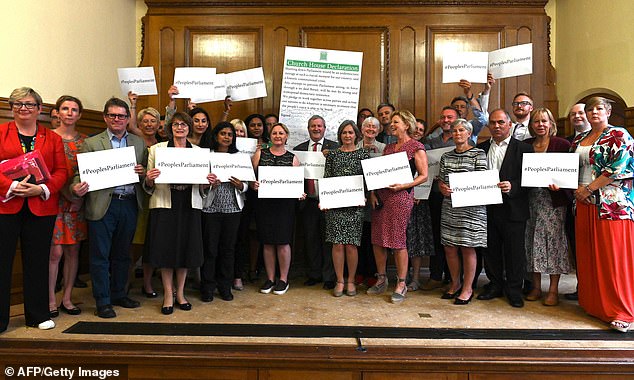 Pro-Remain politicians after signing a cross-party declaraton following a meeting to discuss Brexit, at Church House in central London today

A statement from the six parties said: ‘The attendees agreed that Boris Johnson has shown himself open to using anti-democratic means to force through No Deal. The attendees agreed on the urgency to act together to find practical ways to prevent No Deal, including the possibility of passing legislation and a vote of no confidence.’

The party leaders have agreed to hold further meetings. Over the coming days contact will also be maintained at lower levels, with representatives ‘wargaming’ strategies for how to create a legal barrier to No Deal.

In his letter to MPs, Mr Corbyn wrote: ‘As you were one of 116 Conservative or independent MPs who voted against No Deal [on March 27] and are not on the Government frontbench, I am writing to you to offer to work together, in a collegiate, cross-party spirit, to find a practical way to prevent No Deal.’

But Tory chairman James Cleverly tweeted: ‘These six politicians aren’t trying to stop a No Deal Brexit, they’re plotting to ignore the votes of 17.4million people and stop Brexit completely.’

DeChambeau wins FedEx Cup opener; Henderson takes residence...
Prime Minister poised to bind Britain into the customs union
Couple buy £250,000 three-bedroom 'dream' home only to find driveway is too narrow for BMW
Children to be given lessons in how to spot 'fake news' to combat wave of 'antivax' stories
One in six women who fail to become mothers via IVF get pregnant naturally within five years
One in three have problems with controversial smart meters
ARRON BANKS: For the sake of Brexit and for the sake of our country we MUST unite
NASA and Elon Musk's SpaceX successfully launches Falcon 9 to the International Space Station