The Chancellor has told Whitehall departments there will be ‘no blank cheques’ for government departments ahead of a spending review in which he is expected to announce extra cash for schools, the and police recruitment.

But despite his tough rhetoric one Labour MP said next Wednesday’s announcement would amount to an emergency general election Budget.

Ahead of the September 4 statement Mr Javid said the Government could ‘afford to spend more on people’s priorities’ such as schools, hospitals and police after a decade of cutbacks.

The former home secretary said he would come good on the pledge made by at the last Tory conference and loosen the purse strings for public services. 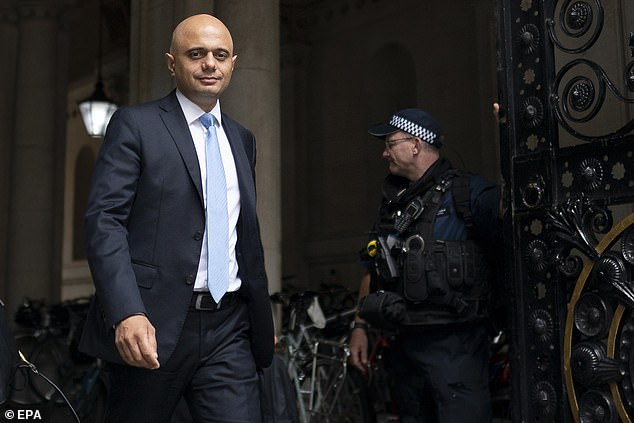 Writing in the , he said: ‘Thanks to the hard work of the British people over the last decade, we can afford to spend more on the people’s priorities – without breaking the rules around what the Government should spend – and we’ll do that in a few key areas like schools, hospitals and police.

‘But at the same time, it’s vital that we continue to live within our means as a country. Unlike the Labour Party, we don’t believe in just throwing money at a problem.

‘And especially at a time when the global economy is slowing, it’s important that we don’t let our public finances get out of control. ‘

He played down expectations of a pre-Brexit spending spree and pledged to stick to the fiscal rules which have governed expenditure for much of the past decade.

Fiscal rules are broad budget guidelines set by chancellors that restrict the amount the Government can borrow, with the aim of making fiscal policy more rigid and predictable.

The current rule was set by Philip Hammond and aims for annual borrowing of less than 2 per cent of gross domestic product in 2020-21.

‘An early general election to force through no deal Brexit will be fought by MPs from all parties.’ 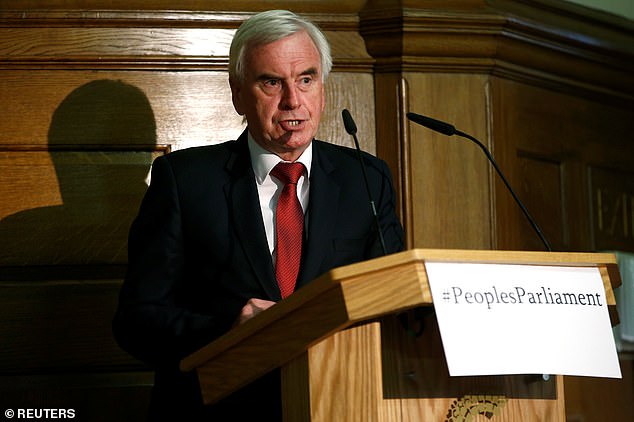 Shadow Chancellor John McDonnell criticised Mr Javid’s decision to cancel a speech planned for last week at the last minute, claiming it was a sign that ‘panic’ was ‘setting in inside Government’.

The decision to fast-track efforts to draw up public spending and investment plans was announced earlier this month – although the target date was given as just September, rather than ‘early September’.

Mr Javid asked for a 12-month spending round instead of a longer-term exercise in a bid to ‘clear the ground ahead of Brexit while delivering on people’s priorities’.

The spending round will cover day-to-day department budgets for 2020/21, rather than a three-year period first mooted by the previous government, as the UK prepares to leave the EU on October 31.

The Chancellor said the review would ‘give Whitehall departments certainty over their budgets for next year, and will confirm our plans to fund the nation’s priorities’.

‘The next 65 days will see a relentless focus across Whitehall on preparing to leave the EU,’ he said.

‘As the Prime Minister has said, the best outcome for us would be to leave with a deal – he spent much of last week speaking to his European counterparts to do just that.

‘But to get that deal, we need to be prepared to leave with no-deal. That’s why after just a few days in the Treasury, I doubled Brexit funding for this year by making an extra £2 billion available for no deal preparations.

‘That means we can recruit up to 1,000 more Border Force staff, create extra capacity to avoid delays with passport applications, and improve transport infrastructure around ports like Tilbury and Dover.’

Demi Rose, 23, shares sweet throwback snap of dad Barrie... two weeks after his tragic death aged 80
Mother is shocked to discover her daughter coloured in their dog
MPs handed a £2,000 pay rise in April
Asda bans carrier bags being used for their online deliveries, saving 500 tonnes of plastic a year
How to visit Madrid for under £100 a night
UK shale gas reserves could be up to 80% lower than previously thought
Victoria Beckham axes YouTube channel because it was bringing in just £25 per day
In the red after Christmas? Prepare for higher fees after overdraft charges overhaul