Floating serenely in the weightlessness of the International Space Station, Anne McClain told a TV interviewer back on Earth last month that she would love to be the first woman on the Moon.

‘I think all of us [women] would,’ the American astronaut said smiling.

At 40, the youngest of the current NASA astronaut corps, she was hotly-tipped among the space agency’s 12 spacewomen to be selected for the Artemis lunar mission, which NASA has vowed will enable a woman to follow in Neil Armstrong’s footsteps.

Unfortunately for the UK-educated rugby fanatic who wanted to be an astronaut from the age of three, McClain has made space history, but not in the way she expected. 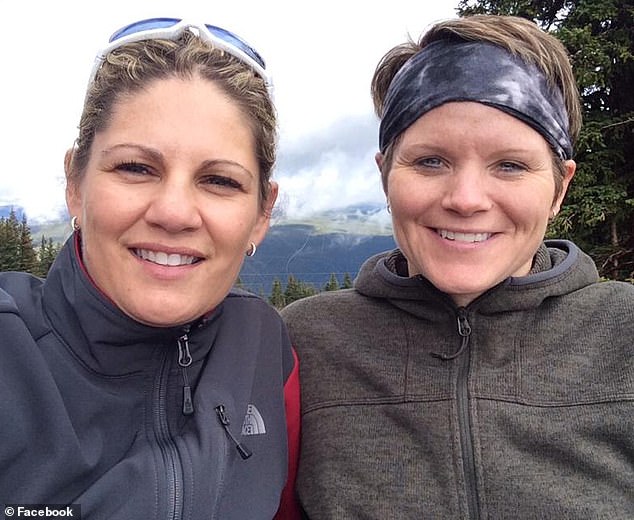 Lt Col McClain, a former army helicopter pilot and Iraq veteran, who uses the military call sign ‘Annimal’ — the name by which she was known on the rugby pitch — has become the first person to be accused of committing a crime in outer space.

According to her estranged wife — who in the process has outed McClain as the first openly gay astronaut — McClain spent some of her recent 204-day mission aboard the space station illegally snooping on her via the internet.

The groundbreaking case has posed a conundrum for investigators and lawyers: how exactly do you deal with an extraterrestrial crime? Houston, we most definitely have a problem.

Summer Worden, a 44-year-old former U.S. Air Force intelligence officer, has revealed that she and Lt Col McClain have spent much of the past year embroiled in an acrimonious dispute over their separation, and the parenting of Ms Worden’s six-year-old son. 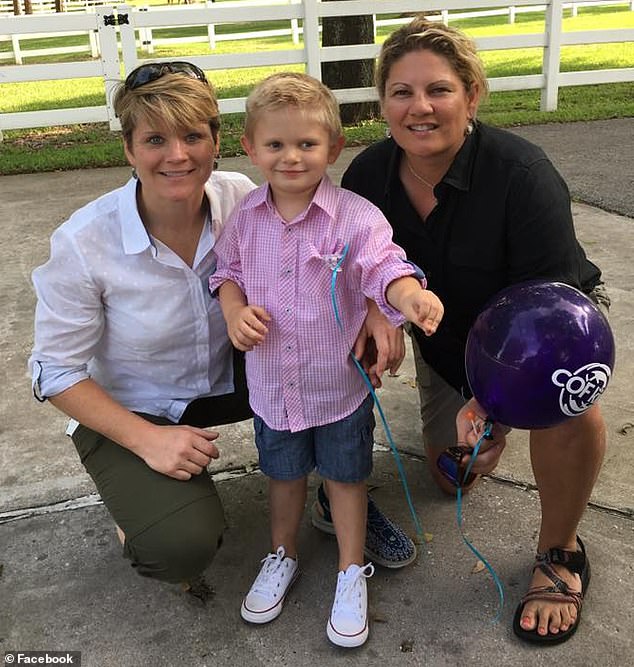 The couple have spent much of the past year embroiled in an acrimonious dispute over their separation, and the parenting of Ms Worden’s six-year-old son (centre)

She said she first became suspicious about McClain’s activities, 254 miles up in space, after the astronaut made clear in emails sent from the space station that she was remarkably well informed about Ms Worden’s recent spending.

Ms Worden, who formerly worked for America’s National Security Agency, asked her bank about the location of computers used to accessed her account recently. She discovered that one was on a computer network registered to NASA.

Accusing her ex-lover of identity theft and improper access to her private financial records, Ms Worden has filed a complaint with the Federal Trade Commission and her parents have complained separately to NASA.

‘I was shocked and appalled at the audacity by her to think that she could get away with that, and I was very disheartened that I couldn’t keep anything private,’ said Ms Worden. 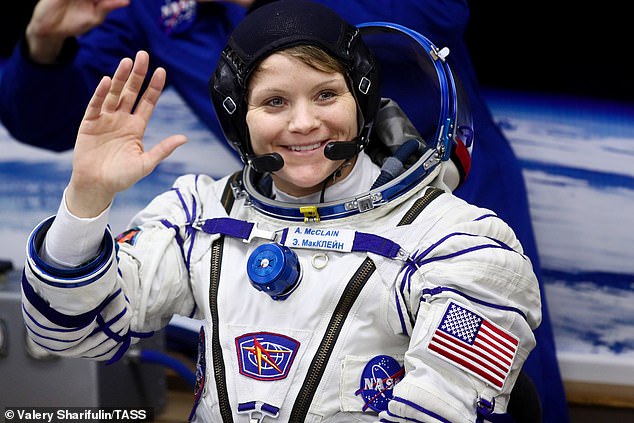 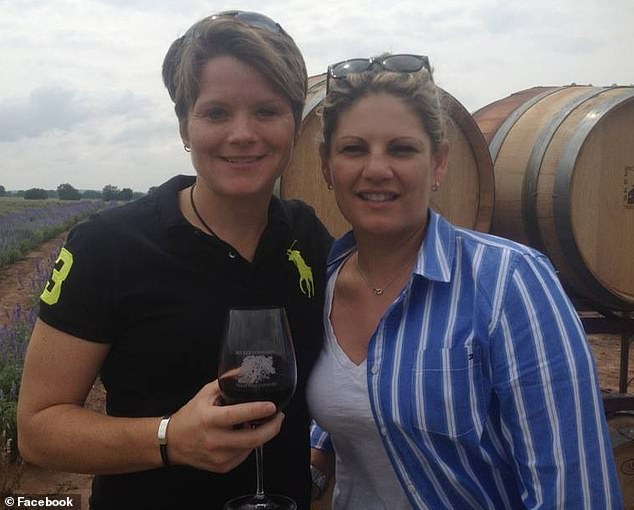 Back on Earth since June, Lt Col McClain insists she’s done nothing improper. She admits she had accessed Ms Worden’s bank account from space, but insists she was simply trying to sort out the couple’s enmeshed finances.

She told NASA’s Inspector General under oath last week that she was doing what she’d always done, and that she had Ms Worden’s permission to ensure the family’s financial situation was in order.

According to her lawyer, McClain had been attempting to make sure there were sufficient funds in her partner’s account to pay bills and to pay for the child they have been raising together.

He says she continued to use the bank log-in password used throughout their relationship and had never been told by her estranged wife not to use it anymore. Ms Worden saw no sign that the astronaut moved or used the funds in her bank account. 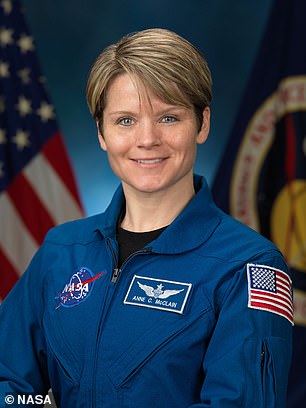 The bizarre case has revealed how, behind the smiles for the cameras as she prepared for a historic space walk, Ms McClain was going through emotional turmoil back on her home planet.

Their rift was focused largely around Ms Worden’s son, born a year before they met. The child had been conceived through IVF and was carried by a surrogate.

Even after they married in 2014, Ms Worden refused to allow the astronaut to adopt the child.

In 2018, while they were still married, McClain asked a judge in her home town of Houston, Texas, to grant her shared parenting rights.

She also requested the ‘exclusive right’ to designate the child’s primary residence if she and Ms Worden couldn’t reach agreement.

She claimed her wife had an explosive temper and made poor financial decisions, asking the court to ‘legally validate my established and deep parental relationship’ with the little boy.

At around the same time, claims Ms Worden, the astronaut posted official NASA photos on her Twitter account of her in a spacesuit alongside the child. ‘The hardest part about training for space is the four-year-old I have to leave behind every time I walk out the door,’ she reportedly wrote. The alleged tweets have now been deleted.

Ms Worden said she was upset that McClain was claiming to be the boy’s mother. Later in 2018, she filed for divorce after Lt Col McClain accused her of assaulting her. The case was dismissed, and Ms Worden denies the accusation, saying it was a ploy by McClain to get control of the boy. 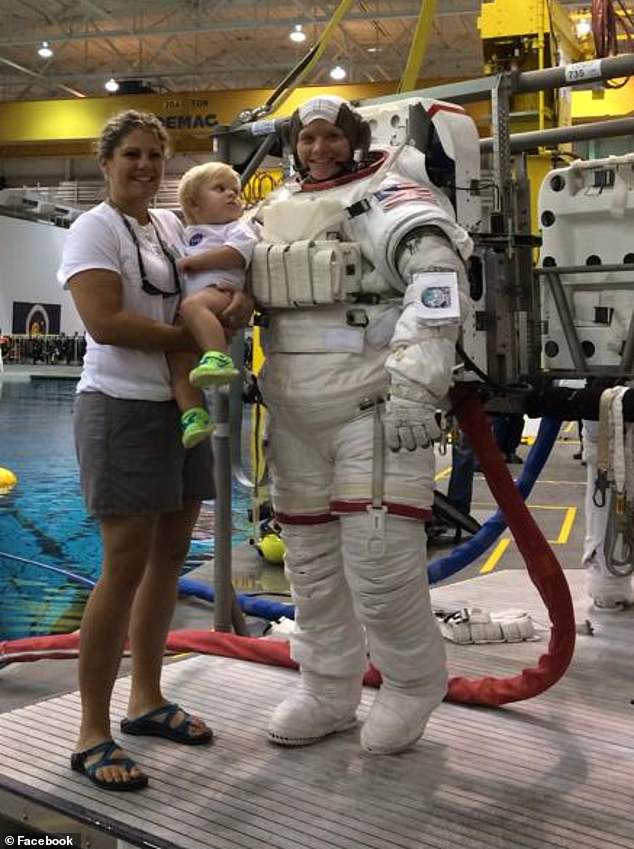 This bitter row continued on in space after NASA passed on Ms Worden’s complaints about her bank account to her estranged spouse on the ISS.

‘They specifically mentioned threatening emails from orbit, and accessing bank accounts — not sure where that info comes from,’ McClain reportedly wrote in an email to Ms Worden that was sent from the space station.

The divorce is due to be settled in court in October.

Ms Worden’s allegations are not only deeply embarrassing for a star astronaut on the cusp of a potential lunar mission, but also for a space agency that would rather not have people think their expensively trained crew spend their valuable days in orbit surfing the internet and firing off personal emails.

It costs $70.7 million to send an astronaut to the International Space Station, which is a collaboration of space agencies from Europe, the U.S., Russia, Japan and Canada.

NASA said it ‘has no statement on this [case] and does not comment on personal or personnel matters. Anne McClain is an active astronaut’.

The case also opens up for the first time the fraught issue of dealing with alleged crime in space.

Hollywood likes to portray outer space as a lawless and unprotected Wild West. And as the tagline for the sci-fi horror film Alien memorably put it — ‘In space, no one can hear you scream’.

However, space law experts — yes, they exist — say that, just as on the high seas, even if conventional terrestrial legal jurisdictions are no longer relevant, laws still apply

Violations of space law are, in theory, handled by the International Court of Justice at The Hague and by the home governments of the astronauts involved. But experts warn that the expected development of space tourism and the establishment of extraterrestrial colonies in the future means the issue of intergalactic crime will become increasingly pressing.

A complication in the McClain case, say experts, could come at the evidence ‘discovery’ stage as NASA may be reluctant to give lawyers access to the top-secret computer networks which the astronaut used to access the bank account and send emails.

Whichever way the case goes, the scandal has probably put paid to Lt Col McClain’s hopes of getting to the Moon with NASA, an organisation that hates controversy.

Born and raised in Spokane, Washington state, she won a postgraduate scholarship to study in the UK, gaining masters’ degrees at the universities of Bristol and Bath. She also played top flight English women’s rugby in the Women’s Premiership, later winning a place in the U.S. women’s national team.

She flew 200 combat missions in Iraq, but credits rugby with instilling the ‘grit, toughness and mental focus’ she needed to become an astronaut. She was among eight people out of 6,300 applicants to earn a place in NASA’s 2013 astronaut class.

It isn’t the first time Lt Col McClain has suffered a mishap in space. She was scheduled to take part in the first all-women spacewalk in March — until it was discovered that NASA had packed only one female-sized spacesuit.

A male colleague had to take her place (although McClain later did the spacewalk twice) and the farce was sent up mercilessly on the U.S. show Saturday Night Live. ‘The cool thing about crying in space is your tears keep floating around hours after you cried them,’ said the comedian playing McClain.

‘The most uncomfortable thing about going to space is coming home,’ Lt Col McClain told an interviewer. ‘It’s a little strange to get used to gravity again.’

She may have discovered that gravity wasn’t the worst hardship waiting for her back on Earth.

Five men are arrested over sickening Grenfell Tower bonfire
'Alzheimer's is NOT one disease': Scientists group the memory-robbing disorder into six categories
Leicester explosion: Shopkeeper and accomplices are jailed for life
The Queen won't be at Archie's christening because of a diary clash
Pictured: Man, 56, accused of attacking Britain's bravest bobby with a foot-long machete
Check her out! How Kate Middleton relies on 'business-like' houndstooth pattern for power dressing
Meghan Markle will not appear in Canadian Netflix show with gal pal Jessica Mulroney
What is hypnobirthing? How pain management technique was used by the Duchess of Cambridge