Sheridan Smith has revealed she had to cancel a gig due to a bout of laryngitis amid fears she won’t recover in time to return to the stage for Joseph and the Amazing Technicolour Dreamcoat.

The actress, 38, took to Instagram and told fans she had lost her voice and is currently on vocal rest until it returns.

She said: ‘So I’ve lost my voice due to laryngitis and not sure when it will be back. So sorry to car fest where I am meant to be gigging today and just hope it comes back so I can finish Joseph. 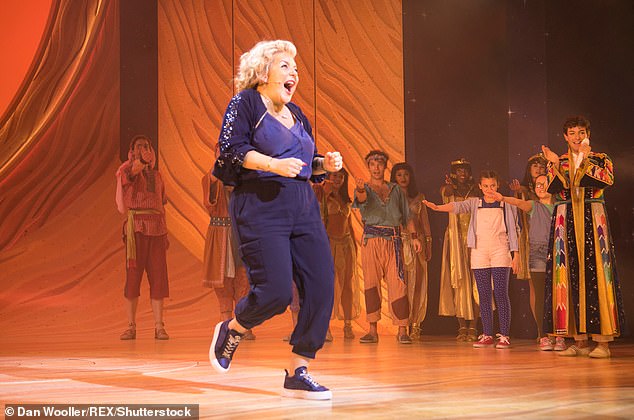 Health: Sheridan Smith, 38, has revealed she is suffering from laryngitis and has lost her voice (pictured in July 2019)

‘On vocal rest for now till it gets better. So sorry guys.’

Laryngitis causes the voice box or vocal cords to become irritated or swollen with symptoms usually lasting from one to two weeks.

Sheridan is currently starring as the narrator in Joseph at the London Palladium opposite Jason Donovan and Jac Yarrow.

Many of Sheridan’s fans sent their well-wishes to the star and praised her performance in Joseph. 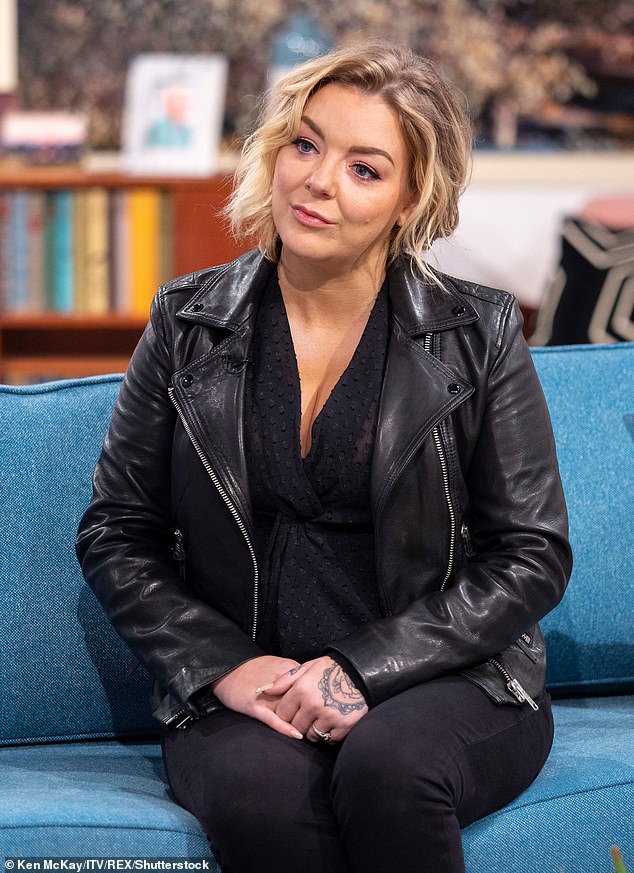 She said: ‘I am meant to be gigging today and just hope it comes back so I can finish Joseph [and the Amazing Technicolour Dreamcoat]’ (pictured in January 2019) 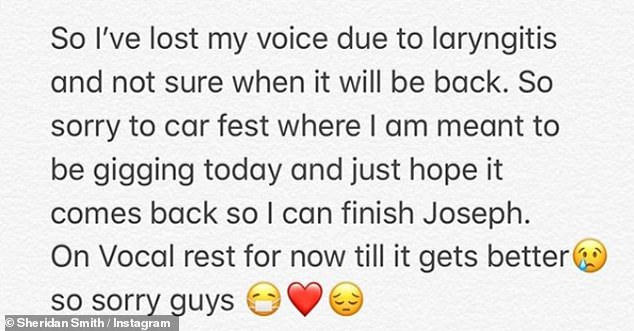 One Instagram user wrote: ‘Hope you feel better soon, We saw you last week and you were so so so amazing.’

Another said: ‘Loved you in Joseph. For us, you made it. So funny and just perfect. Hope you feel better for the last shows.’

Another fan wrote: ‘Went to see you last night and you were amazing!! Sorry to hear you’re not feeling well. The narrator was my absolute favourite character!’ 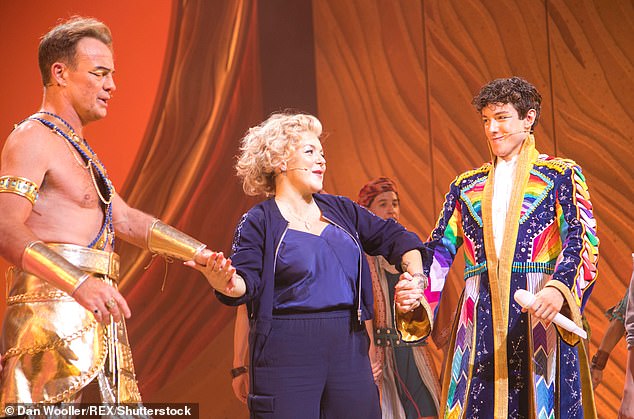 Role: Sheridan has been starring as the narrator in Joseph at the London Palladium opposite Jason Donovan and Jac Yarrow (pictured in July 2019)

She quit a previous run of Funny Girl at the Menier Chocolate Factory in London that year after her father Colin was diagnosed with cancer.

Another performance was then cancelled midway at the Savoy, with bosses citing technical difficulties.

Away from her work, Sheridan recently shut down speculation that she is secretly married to fiancé Jamie Horn after she called him her ‘hubby’ in a now deleted Twitter snap. 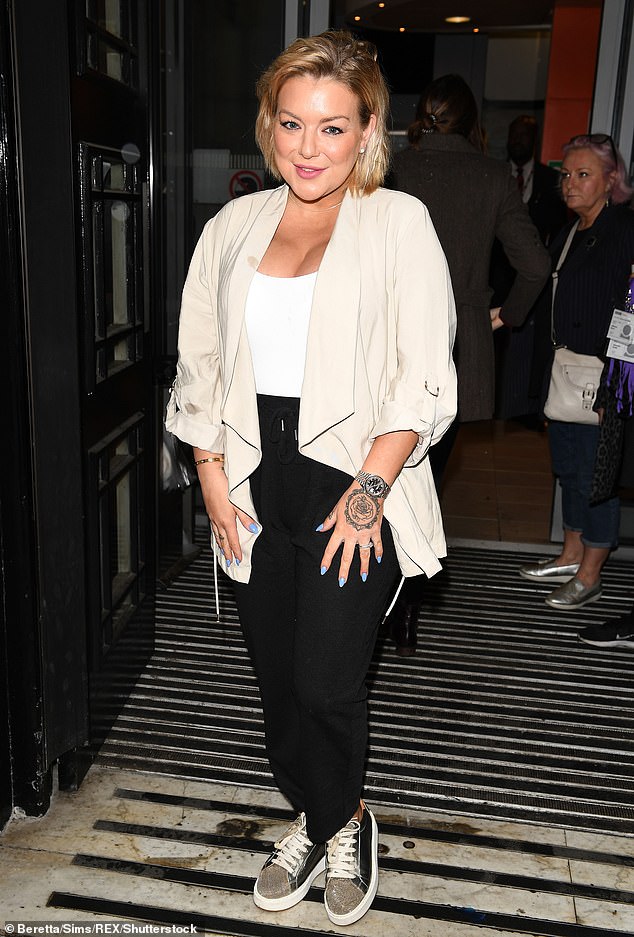 Past: Sheridan previously pulled out of performing in West End show Funny Girl in 2016, citing stress and exhaustion (pictured in June 2019)

Sheridan was quizzed about her marital status during an appearance on This Morning after she shared a picture wearing two bands on her ring finger.

She said: ‘I do wear two bands on my hand, mainly because this one is too big and it does keep it on.

‘But Jamie does wear his wedding ring, we’re not actually married, we just do it. My friends do that but no one actually talks about it…

‘We didn’t think about it when we took a picture and put it on Twitter and then of course everyone thought that we were married.’ 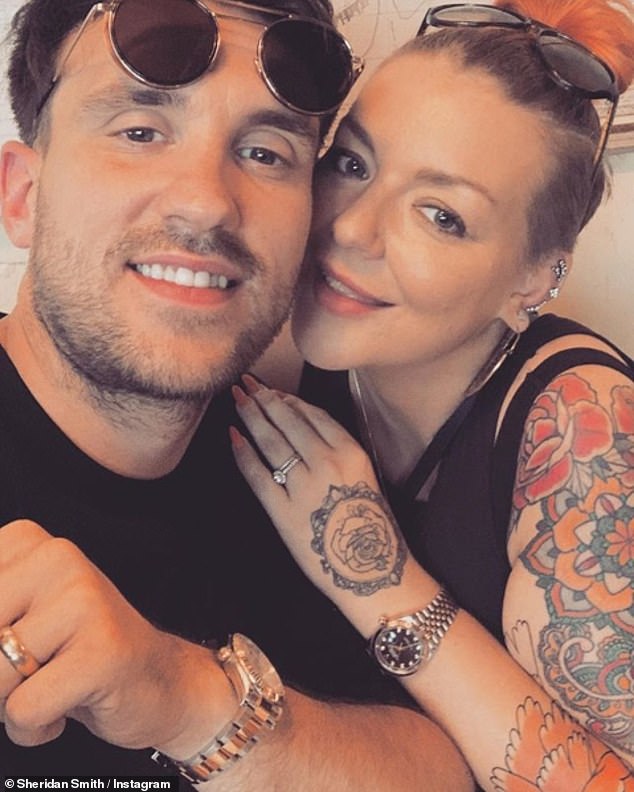 Romance: Away from her work, Sheridan recently shut down speculation that she is secretly married to Jamie after she called him her ‘hubby’ in a now deleted Twitter snap