Beach-goers took a dip in the sea to cool off as a temperature record of 89F was set for the August Bank Holiday on what was a ‘beautiful’ and ‘sunny’ second day of the Bank Holiday weekend.

The record was set at Heathrow this afternoon and was just above the 31.5C record set at the same location in 2001, the Met Office said.

Thousands of people descended on Bournemouth beach this morning to make the most of the sizzling temperatures, with many clad in swimming shorts and bikinis in an effort to get a sun tan.

Meteorologist Emma Smith earlier told MailOnline it was set to be ‘a beautiful and sunny day’, with a band of heat mainly affecting the east of England. The entire country should have blue skies today, she added. 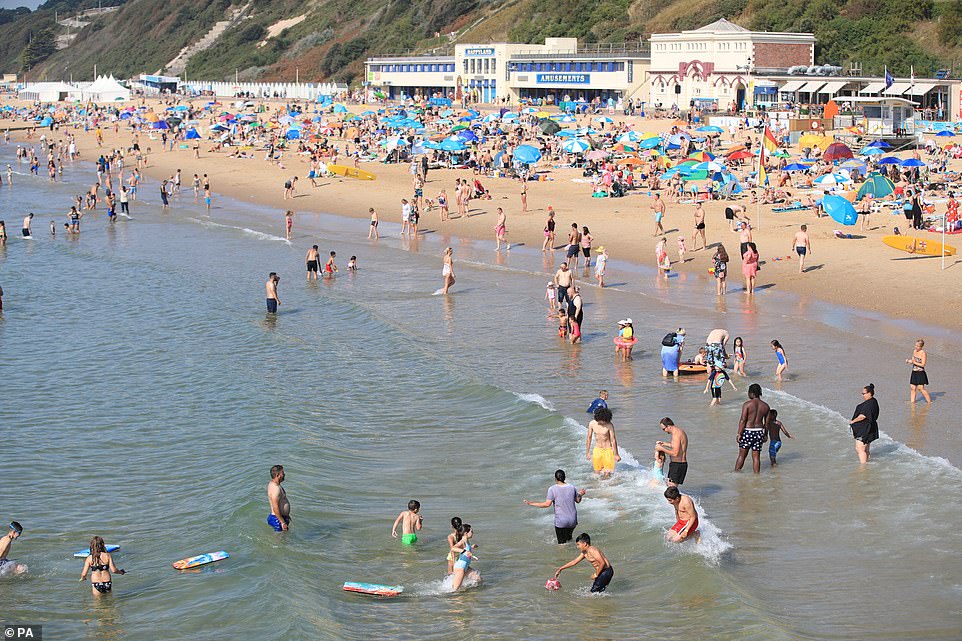 People on Bournemouth Beach enjoy the sunshine which is set to continue throughout the long weekend, with even hotter temperatures expected, possibly reaching a record high of 91F, most likely in the south-east of England, on Monday 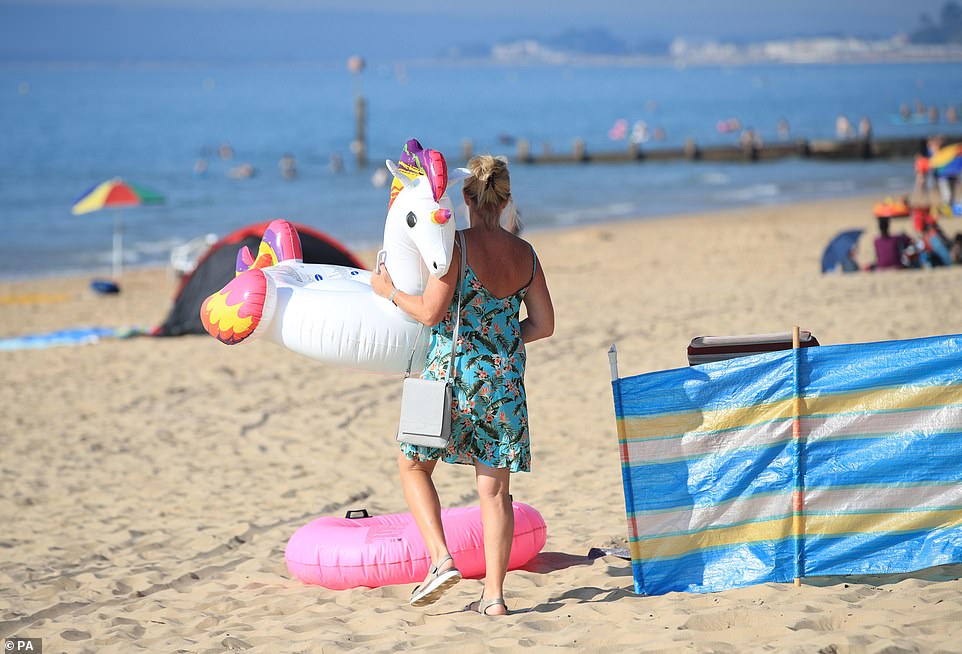 Girls were wearing skimpy short shorts and bikini tops to keep cool as the final day of Leeds festival got underway today. Left, a woman talks on the phone as she strolls through the festival site wearing short shorts and a sports bra. Right, another girl keeps her hair out of her face with a black hair band as the heat calls for a black lace bikini top and short shorts 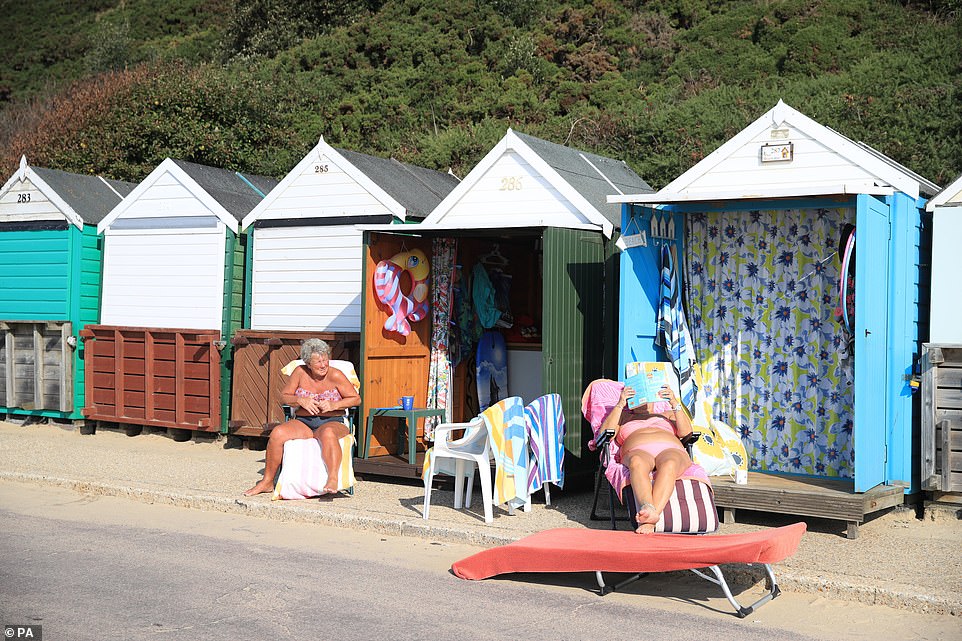 ‘We’ve got another beautiful sunny day ahead. There is cloud lingering around the coast of Wales and Northern Ireland could see patchy cloud but the bulk of the country will see plenty of blue,’ She said.

‘Sunshine and the holiday weekend means a double hit of visitors,’ a Brighton seafront spokesperson said.

The Met Office forecast the hottest August Bank Holiday weekend since the holiday was created 54 years ago, as the mercury rises higher in the UK than Antigua, the Caribbean, Hawaii and Mexico City.

And beach-goers made the most of the sunny weather as they lounged on deck chairs outside beach huts and swam in the sea in Bournemouth. 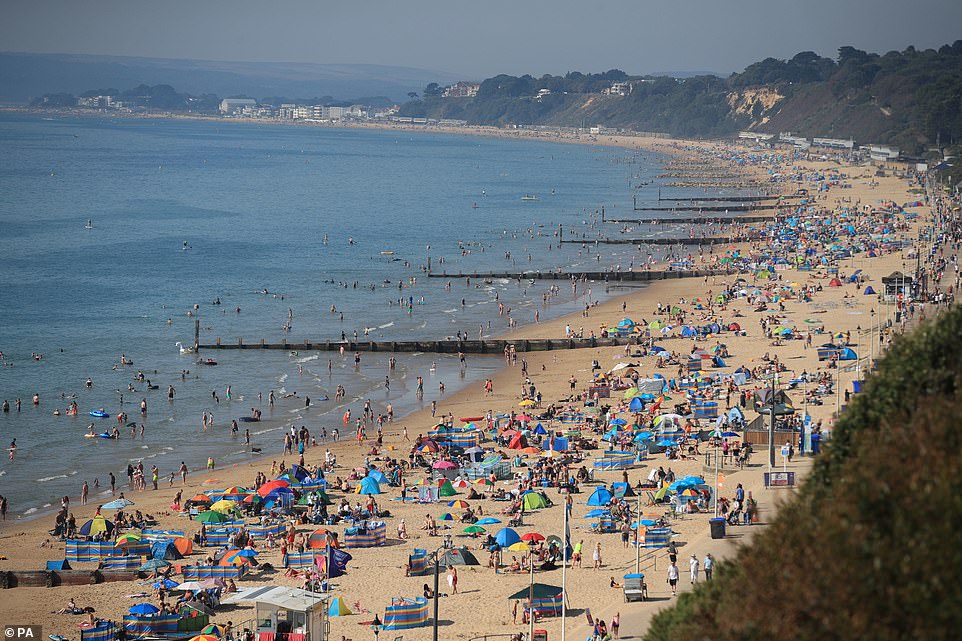 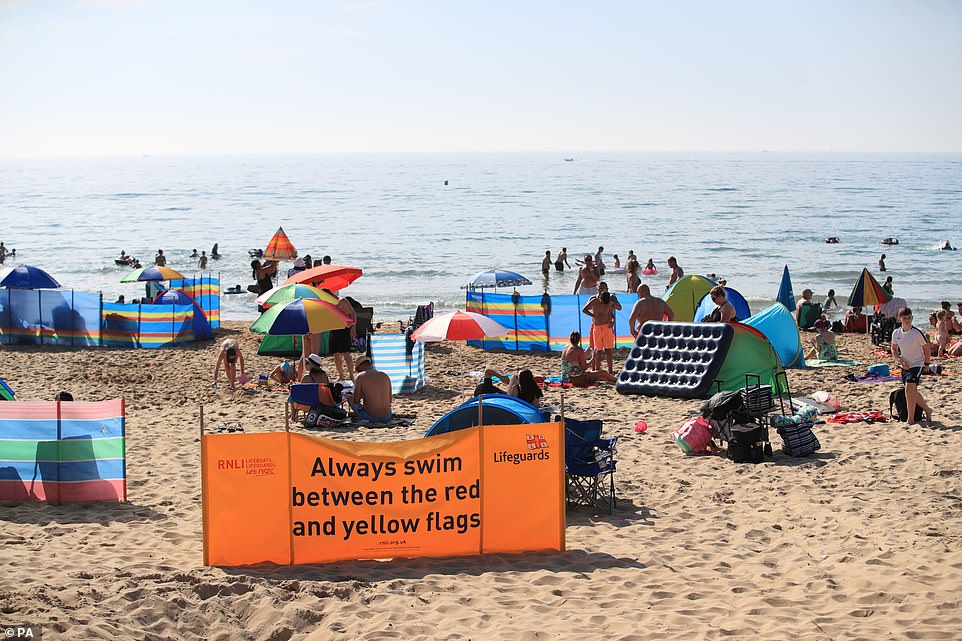 This Bank Holiday has smashed previous records for temperatures over the weekend. The Bank Holiday Monday record is 82.7F in Holbeach, Lincolnshire, on August 28, 2017, while the record over the whole holiday weekend is 88.7F which was recorded in Heathrow on August 25, 2001.

It is expected to get even hotter tomorrow, with temperatures potentially soaring higher on an August 26 than they’ve ever been since records began in 1841. The previous record for the highest mercury on an August 26 was 91F in Cromer, Norfolk, in 1864.

The heatwave comes a month after the hottest day ever recorded, on July 25, where temperatures rose to 101F. 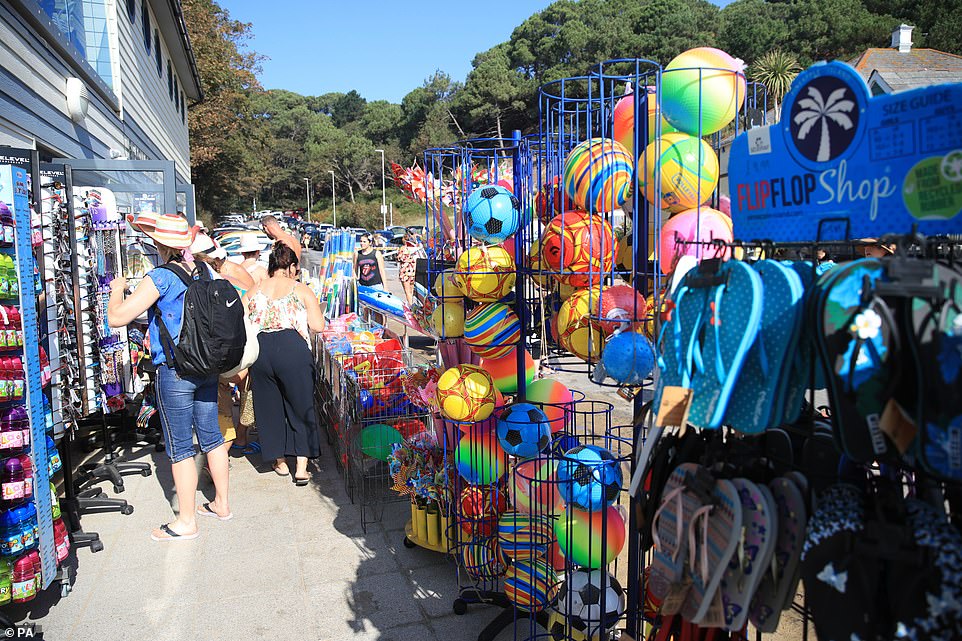 Shops were full of people as a record 17 million-strong army of holidaymakers saw beach resorts celebrate the £2.5billion biggest-spending tourism weekend of the year 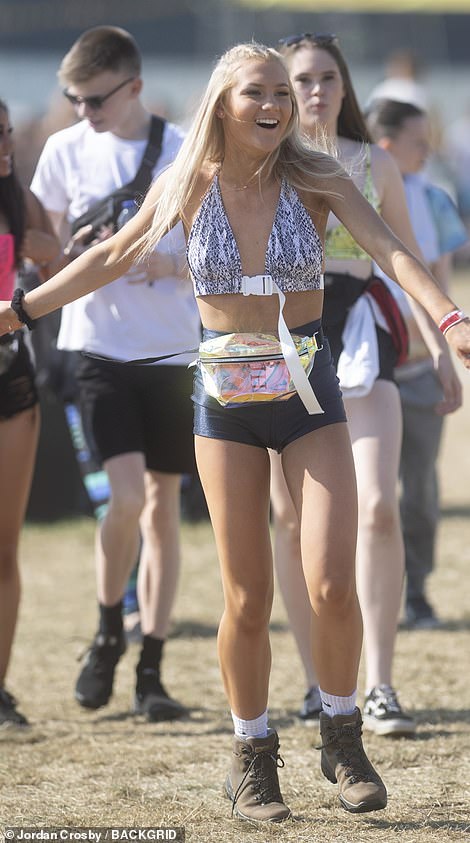 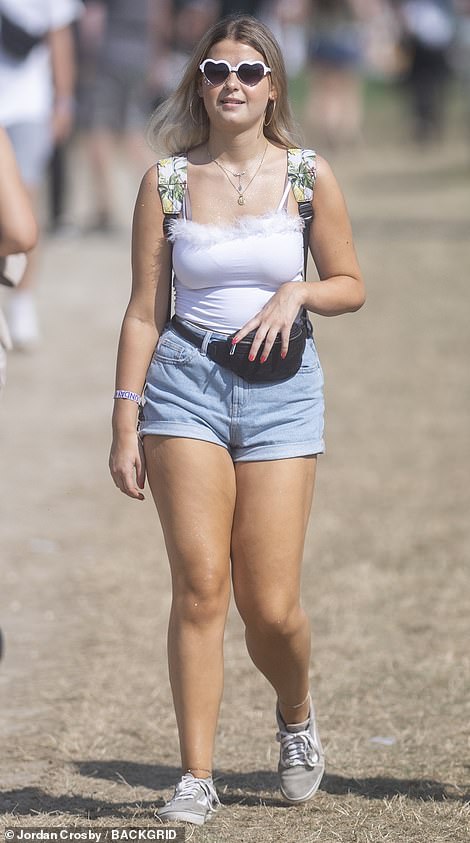 One girl runs towards a stage with her friends lagging behind at Leeds festival. Another woman (right) also wears short shorts 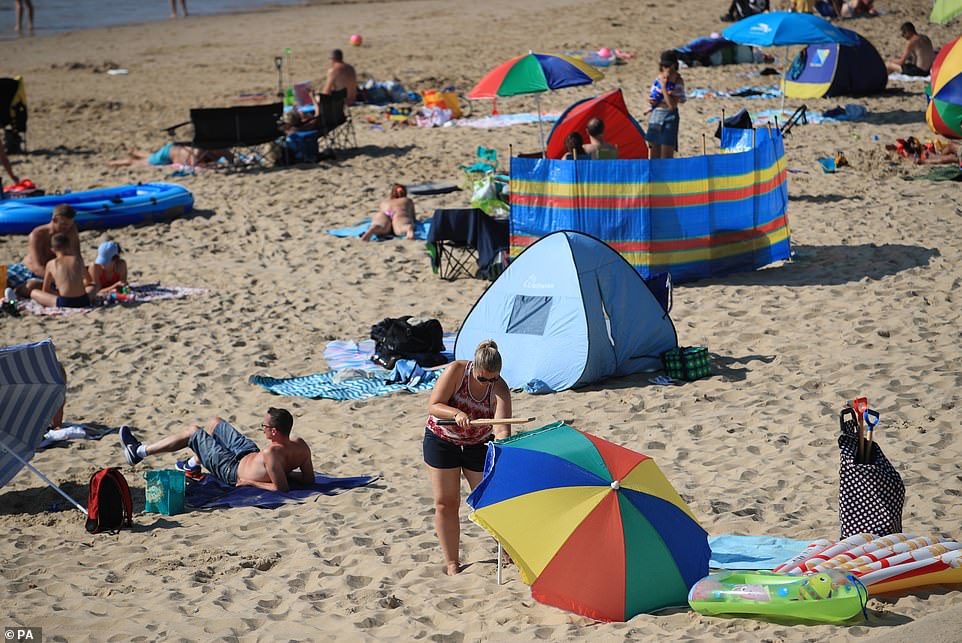 A bat is used to bury the umbrella’s pole in to the sand so this woman can use it as a shield from the sun. Around her families enjoy sitting out in the sun

But not everyone will be lucky enough to enjoy the heatwave. The west of Scotland, Wales and England could see low cloud, mist and ‘murky conditions’ overnight and in to tomorrow morning, with heavy showers and thunder arriving Monday night.

Emma Smith, Met Office forecaster, added: ‘Tonight there is some low cloud around that will come to settle over the west of Scotland, Wales, and western England.

‘There will be low cloud, mist and murky conditions. It will be a warm night tonight, perhaps uncomfortable for some in the east. Overnight temperatures will be 60F and 66C towards London. 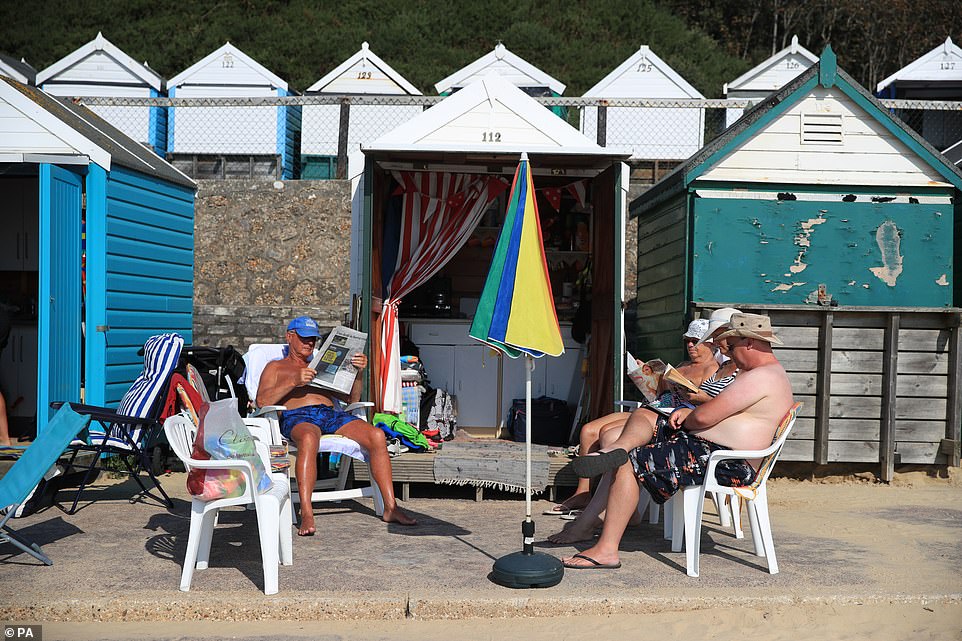 A group of people sitting outside their beach hut read newspapers, magazines and books as temperatures are expected to soar to 91F later this afternoon 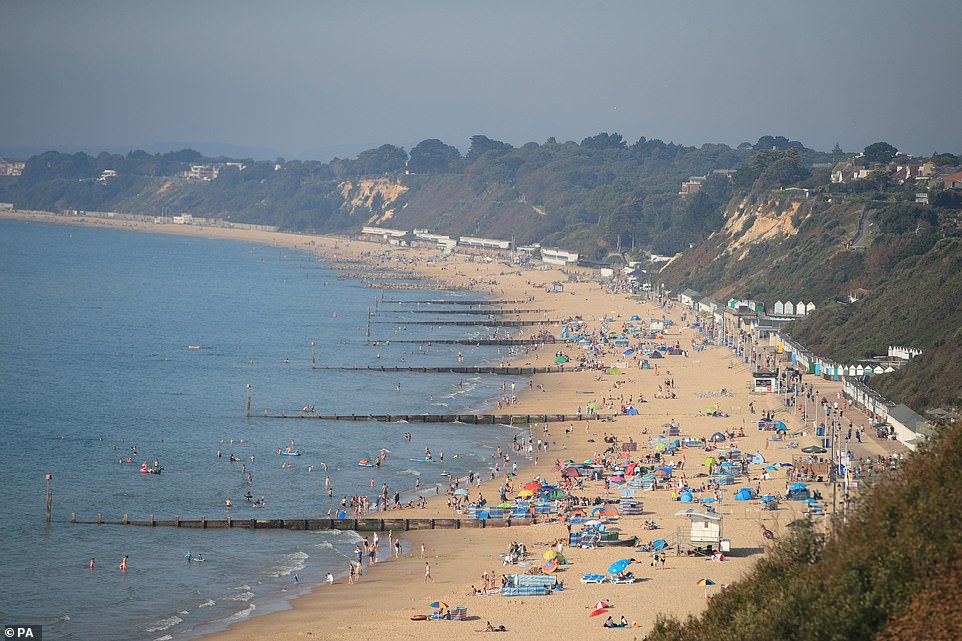 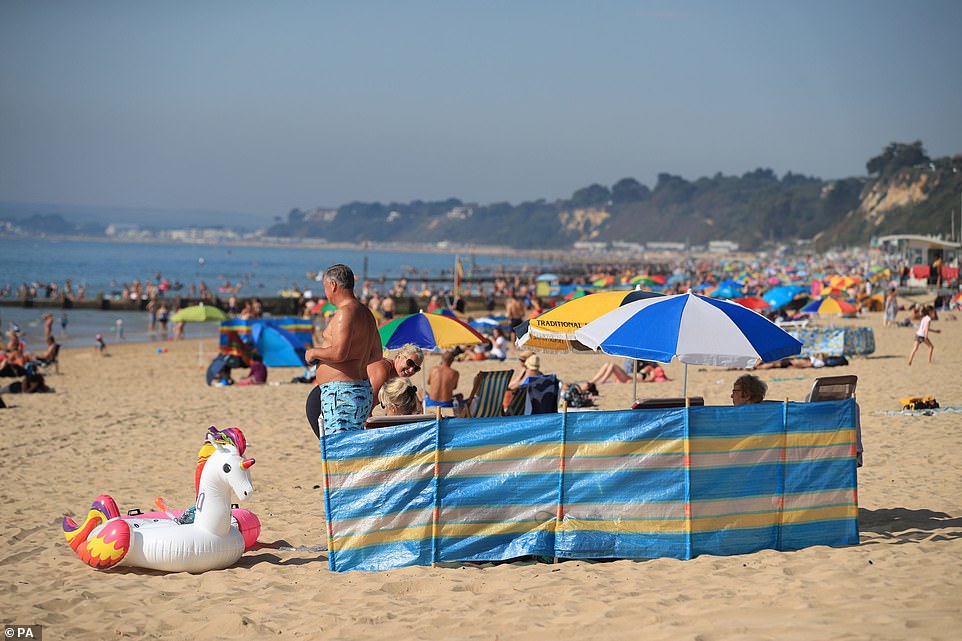 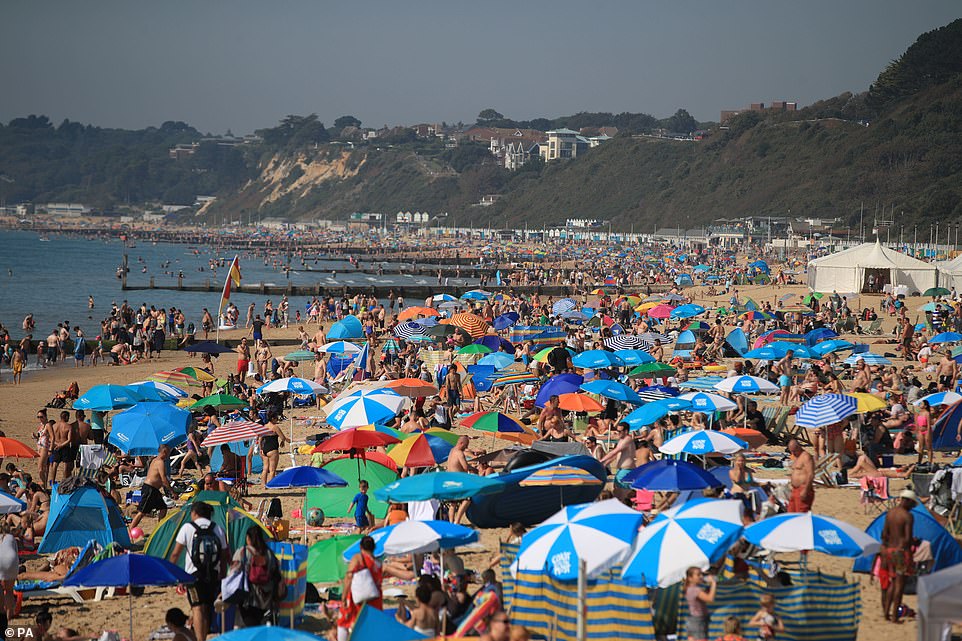 As the day progressed more and more people descended on the beach. Record traffic jams are expected as sun-lovers clog coastal routes including the A23 to Brighton, A31 to Dorset, A30 to Cornwall and M55 to Blackpool today and tomorrow

‘Tomorrow there’s quite a grey start in the West but that low cloud will start to life up but will linger around coast areas in Wales and the south west.

‘It will be a beautiful bank holiday Monday. We could see 33C tomorrow in the West.

‘Later on in the day through the afternoon we have a risk of a few showers in the west. These will be on the heavy side and there is a risk of thunder as well.’

A band of rain will make its way across from the Atlantic, hitting the western isles of Scotland tomorrow night. By dawn tomorrow morning there will be showery outbreaks in Wales while the south east of England stays clear. 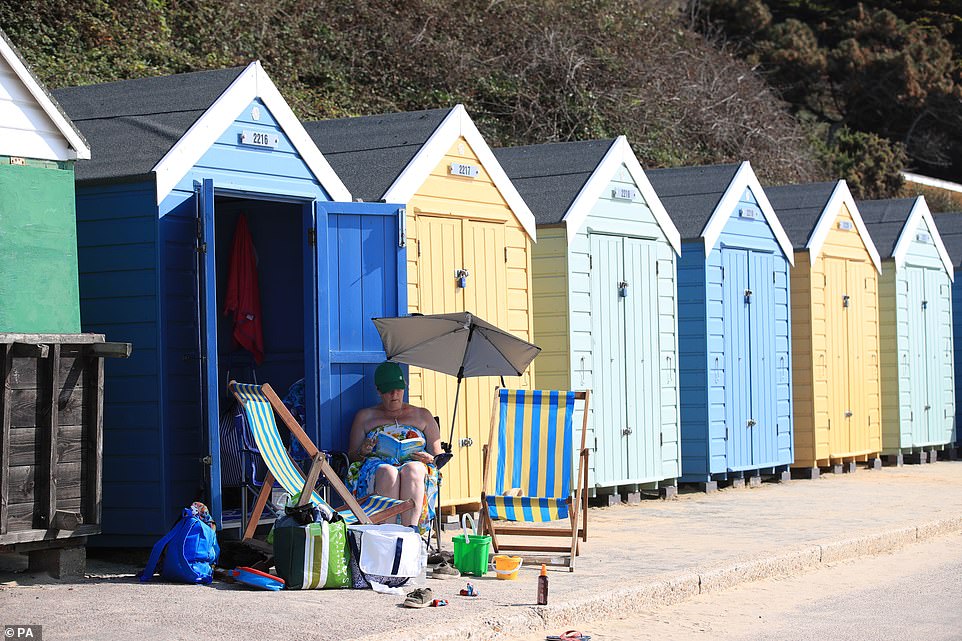 A woman sits alone reading under the shade of an umbrella outside a beach hut in Bournemouth. It is expected to get even hotter tomorrow, with temperatures potentially soaring higher on an August 26 than they’ve ever been since records began

‘On Tuesday the heat becomes concentrated in the southeast. Showers will be on the heavy side with the risk of thunder at times. But then it will start to calm down,’ Ms Smith said.

‘It will be much dryer on Thursday. In the early hours of Thursday there is a risk of mist and fog patches. It looks like it will turn more unsettled next weekend.’

Record traffic jams are expected as sun-lovers clog coastal routes including the A23 to Brighton, A31 to Dorset, A30 to Cornwall and M55 to Blackpool today and tomorrow.

Traffic analysts Inrix said: ‘There could be record delays.’ 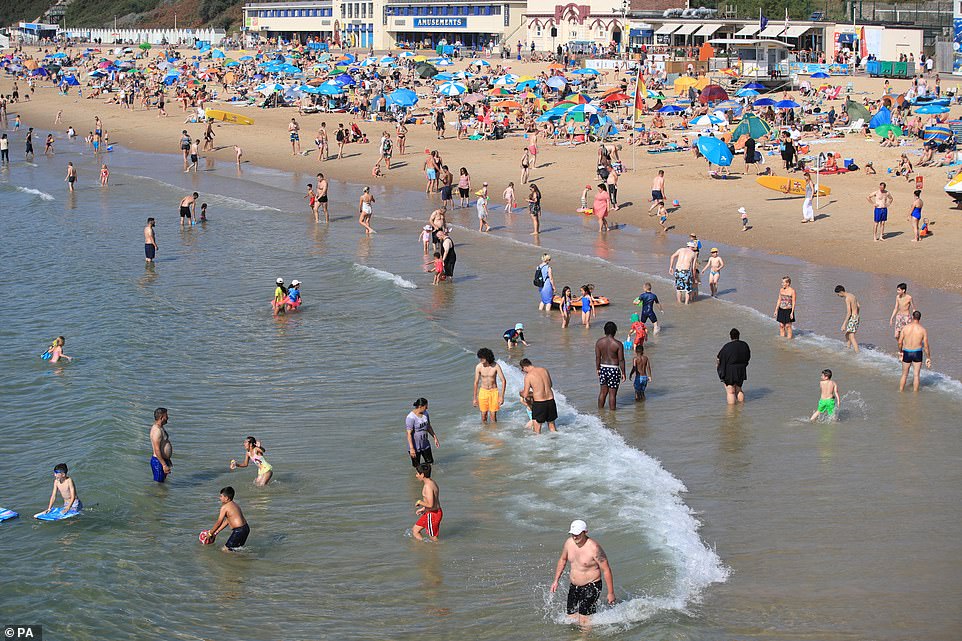 Families enjoyed splashing in the waves off the coast of Bournemouth earlier today. With such good weather falling on the Bank Holiday weekend many families took the opportunity to go to the coast

Moment a brazen UberEats driver is caught helping himself to chip after ringing his customer's bell
Father's emotional tribute to goalkeeper son, 14, who died after horror on-field collision
Sick online trolls are claiming Meghan Markle's baby bump is a FAKE prosthetic
Qantas flight attendant sues airline for $315,000 after slipping on wet stairs
Raheem Sterling reveals his pain at losing his 13-year-old friend Damary Dawkins to cancer
Why 42 is NOT the answer to life, the universe and everything
Parody of Coca-Cola's Christmas truck advert featuring Jeremy Corbyn is removed from social media
China censorship deleted critical coronavirus articles and social media posts written in Morse code