‘s Soyuz rocket that is carrying ‘s six-foot tall humanoid robot Fedor strapped into the pilot seat and clutching a Russian flag has failed to dock at the International Space Station.

After an attempt to make the attachment, which was scheduled for around 5.30am GMT, a live broadcast of the event was cut.

The setback means Fedor, which stands for Final Experimental Demonstration Object Research, will have to wait until Monday before joining astronauts, when the docking will be re-attempted.

It is currently floating in the Soyuz rocket around 100 metres from the station. 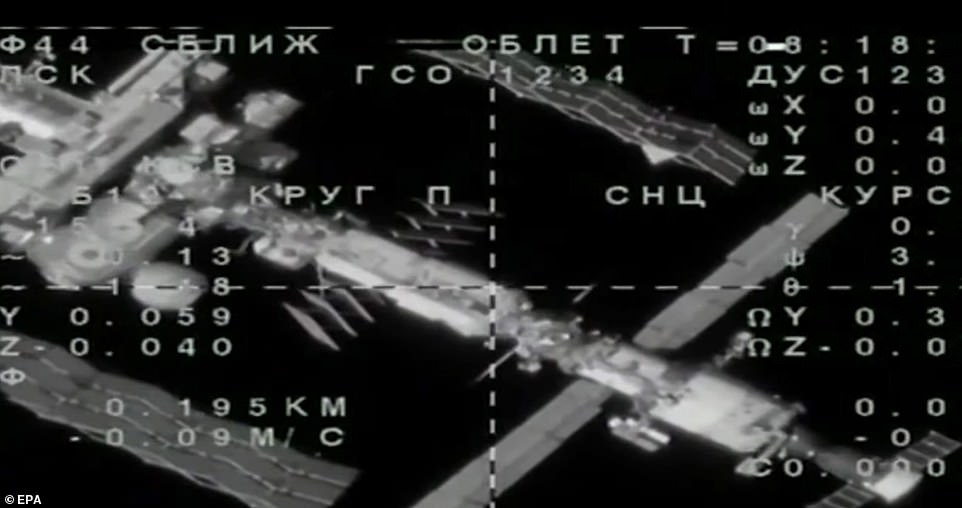 Russia’s Soyuz rocket which is carrying Vladimir Putin’s humanoid robot Fedor has failed to dock at the International Space Station. A live broadcast of the attempt was cut (pictured) before journalists were ushered out of the Russian space agency’s headquarters outside Moscow 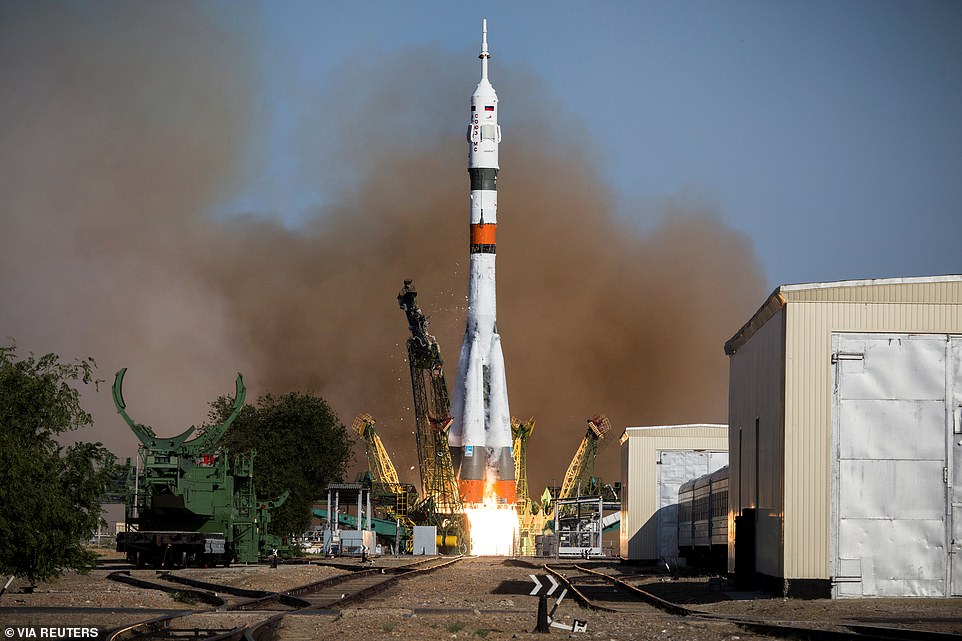 Russian Soyuz-2.1a booster with the Soyuz MS-14 spacecraft carrying robot Skybot F-850 blasted off from a launchpad at the Baikonur Cosmodrome, Kazakhstan, on Thursday. Fedor is being sent to the station for tests and to assist astronauts 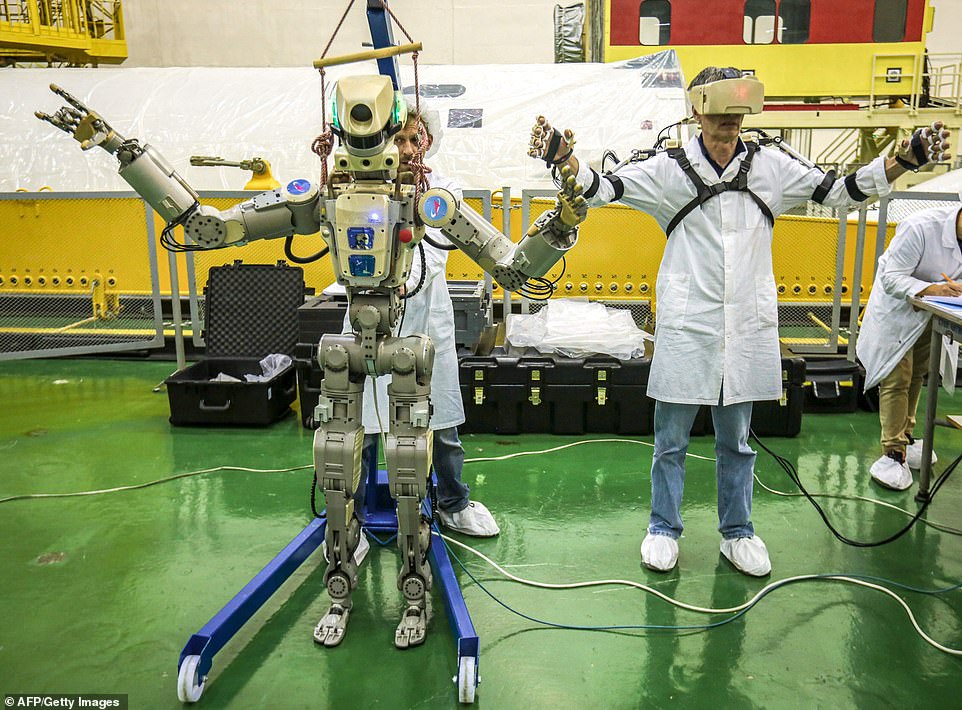 Russian humanoid robot Skybot F-850, shown last month at the Baikonur Cosmodrome in Kazakhstan. It has been sent to the ISS and is meant to spend at least 10 days there before flying back to earth

After the failure, which has been blamed on issues related to the automatic docking system, journalists were ushered out of Russian space agency Roskosmos’ mission control, outside Moscow, where they were watching the docking, reports .

The agency showed a live feed of the expected final part of the journey. However, when docking was unsuccessful the ship began to move away and the feed ended, according to an Interfax correspondent.

NASA said that Russian flight controllers had blamed the International Space Station, rather than their spaceship, for the problems with docking.

The robot was scheduled to spend 10 days at the facility where it would be used to support the crew and test its skills.

The first of its kind ever sent up by Russia, the Skybot F-850 blasted off in the Soyuz MS-14 spacecraft from Russia’s Baikonur cosmodrone in Kazakhstan on Thursday. 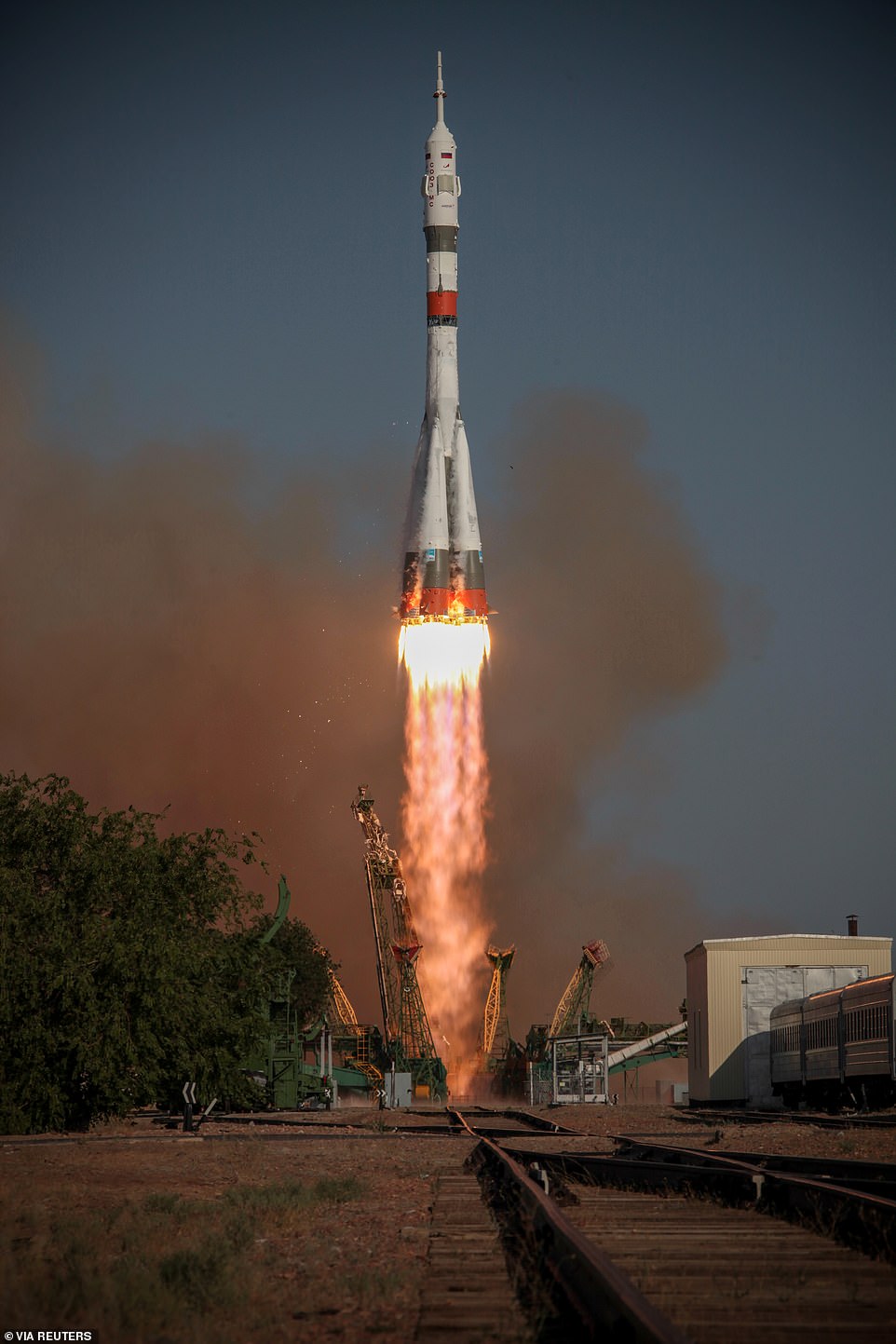 Russian Soyuz-2.1a booster with the Soyuz MS-14 spacecraft carrying robot Skybot F-850 blasts off from a launchpad at the Baikonur Cosmodrome on Thursday morning 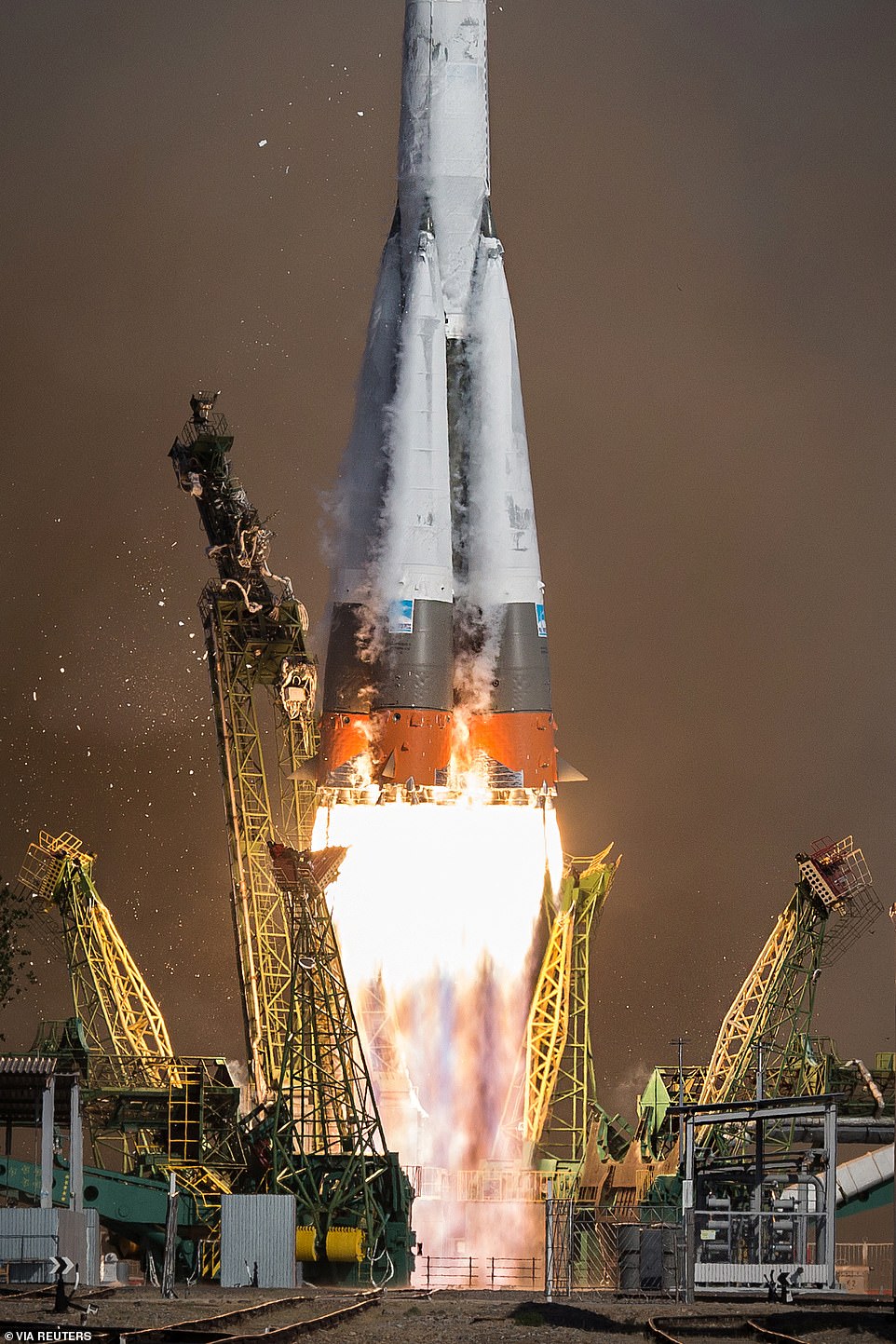 Fedor, on-board the pictured Soyuz rocket, has Instagram and Twitter accounts that describe it as learning new skills such as opening a bottle of water. In the station, it will trial those manual skills in very low gravity 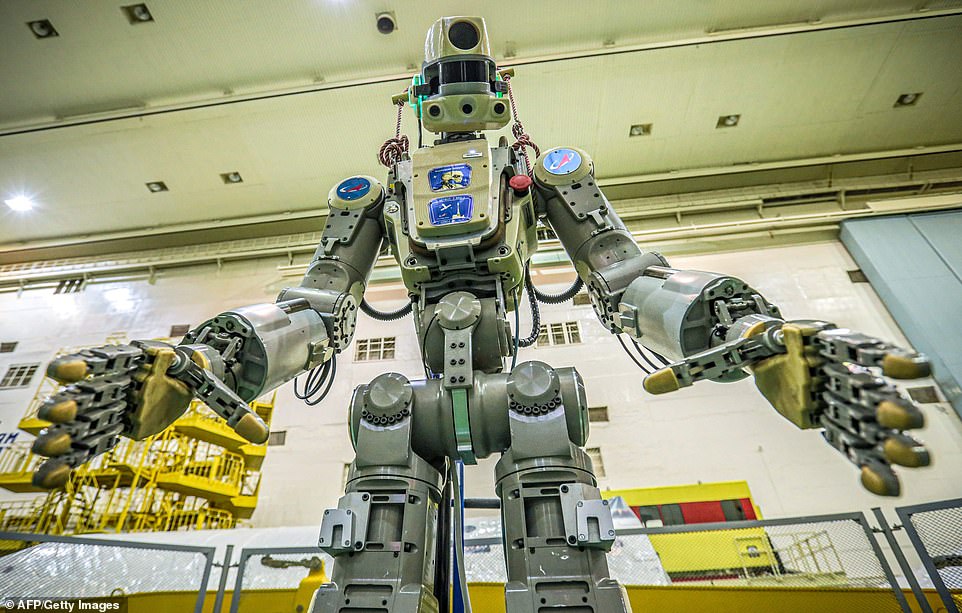 Putin’s deputy premier, Dmitry Rogozin, claimed the war in Syria had shown Russia the importance of robots in difficult environments, and promised Fedor would make a debut in space 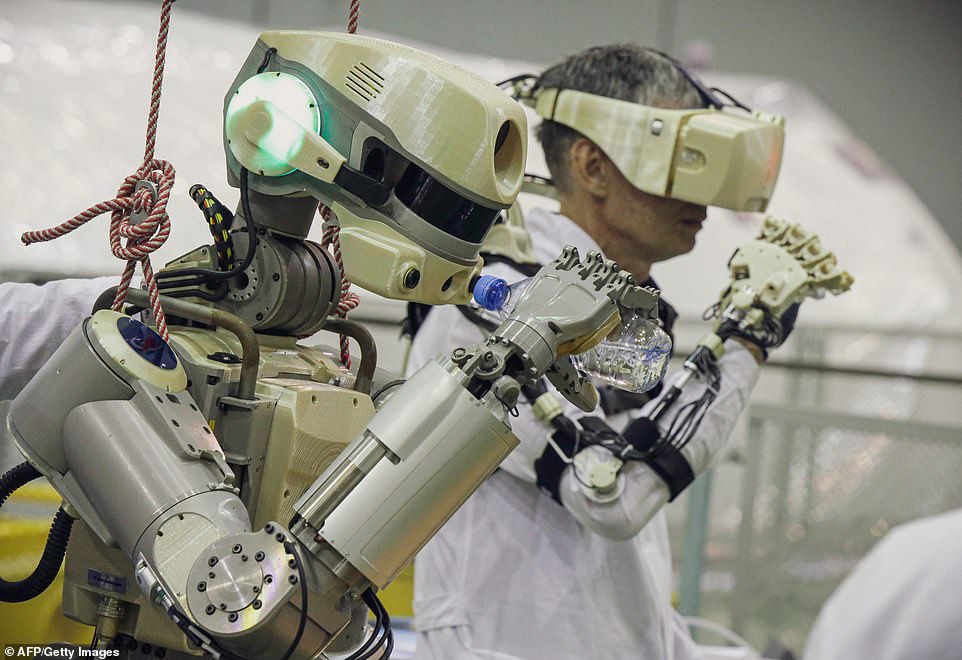 Dubbed Putin’s robo-naut, the machine can be seen determining targets and honing in on specific points, such as steering wheels, which will surely come in handy while they’re in orbit

The machine was heard saying ‘Let’s go. Let’s go’ as it headed for the stars, repeating the famous phrase used by first man in space Yuri Gagarin. The silvery anthropomorphic robot stands at six-foot and weighs 353 pounds.

Fedor has Instagram and Twitter accounts with posts saying it is learning new skills such as opening a bottle of water. It was to trial those manual skills in very low gravity.

NASA sent humanoid robot Robonaut 2 to the station in 2011 to work in hazardous environments.

The ISS is a joint project of the space agencies of the United States, Russia, Europe, Japan and Canada.

Fedor is the name of a Russian human-like robot which will be sent to the ISS.

Formally known as Final Experimental Demonstration Research it will be sent to the ISS via an unmanned Soyuz MS-14 spacecraft next week.

It is six foot tall and weighs 233 pounds when not carrying extra cargo.

It is also capable of carrying up to 44 pounds of cargo.

It mimics the movement of a human, who will remain on Earth, and is versatile enough that footage has emerged of it lifting weights, walking, driving and using tools.