A former Marine who teaches high school math has been placed on leave after bragging that he’d make ‘the best school shooter’.

Keith Cook, 51, was placed under a risk protection order this week by authorities in Lakeland, after making the remarks to his class after a lockdown drill at Lakeland High School.

Cook allegedly told his students that he would plant improvised explosive devices and then ‘fire a couple of rounds and wait for everyone to hide, then press a button, and boom everyone would die.’

‘He said he would have a 1,000-person body count and be a hero,’ Lakeland Police Detective Justin Conatser wrote in a petition for a risk protection order filed with the Polk County Clerk of Courts. 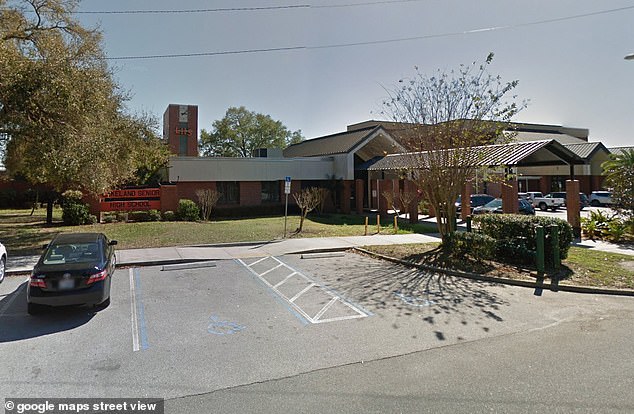 Keith Cook, 51, was placed under a risk protection order this week by authorities in Florida after making the remarks to his class after a lockdown drill at Lakeland High School (anove)

Students told their parents that Cook made the remarks after a lockdown drill at the school on Friday, August 16.

Lakeland police visited the school on Monday. Cook was not arrested but officers sought a risk protection order, which was granted on Wednesday.

The risk protection order allows cops to seize any weapons, but police say that they did not find any weapons on Cook or at his home.

‘If we conduct an investigation and we find the person is dangerous to themselves or someone else, i.e. with a firearm, we can petition the court — we can’t unilaterally do this — and say, ‘Hey, we need a timeout.’ The court can give us a temporary risk protection order,’ Polk County Sheriff Grady Judd said, according to .

Police interviewed Cook, who said that he was not serious about his remarks. 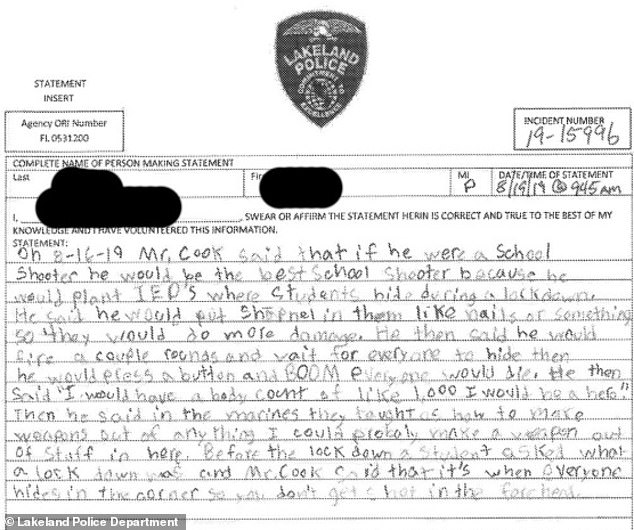 ‘I asked Cook why in the world would he want a school shooter to do a better job?’ Detective Conatser wrote in his report, according to the .

‘He shook his head and said that he, in fact, would not want that now. I said to Cook that being a former Marine, he should be looked at as the person who will protect the students and not make them question whether their teacher is looking to harm them.’

Cook is currently on administrative leave from Polk County Public Schools, awaiting the outcome of a district investigation.

Cook has no prior criminal history. His employment record shows he taught math at Crystal Lake Middle School from December 2008 until July 2014. He has taught at Lakeland High School since November 2014.

Stephen Kings son might have solved thriller identification The Woman of the Dunes chilly case was J...
How Kevin Spacey has not been seen for a YEAR
California Democratic Party chairman forced to RESIGN over staff sexual misconduct allegations
Guy, 23, sparks viral Twitter story after sharing a bold note from two friends asking to date him
Indiana man arrested after admitting to 'stabbing a man he woke up to find having sex with his wife'
Do you feel burnt out? These are the four questions to ask yourself to find out
Fashion Nova crop top is slammed by shoppers - but would YOU dare to wear it?
Serena Williams is stunned by Wang Qiang in the third round of the Australian Open