Britain is set to boil over the three-day Bank Holiday weekend as a severe heatwave with searing 91F (32C) temperatures sweeps in from Europe prompting a government health warning.

Public Health England has issued a level three heatwave action between Saturday to Monday across the country, as the heat drifts across the channel.

Thousands of Britons are already suffering traffic jam chaos after hitting the roads today, with families getting ready to soak up the sun on the beaches or in parks during what is predicted to be the hottest August Bank Holiday on record.

Huge crowds are already amassing at the Leeds and Reading Festivals as thousands get the extended weekend’s fun started early.

According to the Met Office, high pressure will build across England, bringing with it very warm or hot conditions to many parts of the country over the weekend. 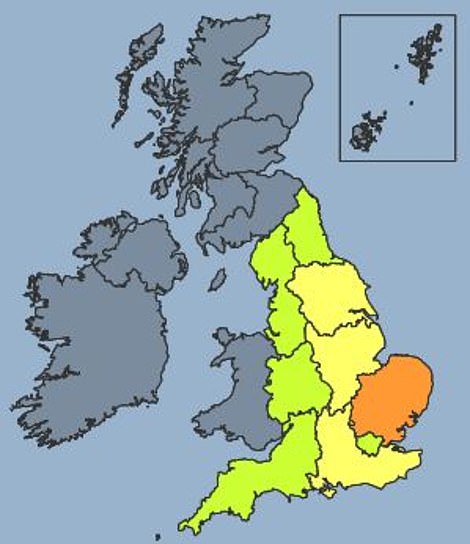 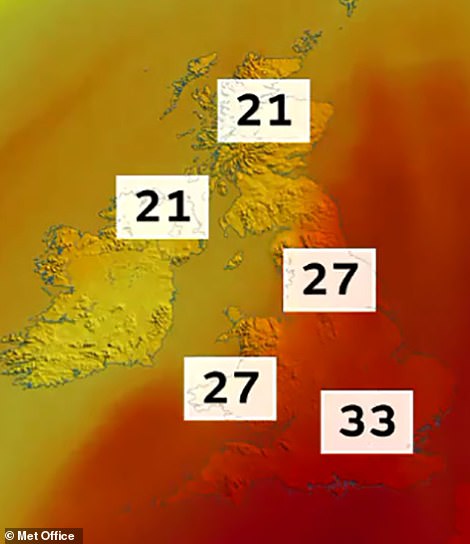 The UK is set to roast under a severe heatwave with temperatures reaching as high as 91F (32C) this Bank Holiday break. From Friday afternoon, south-easterly winds will draw warm air from Europe towards the UK, bringing rising temperatures along with dry and settled weather 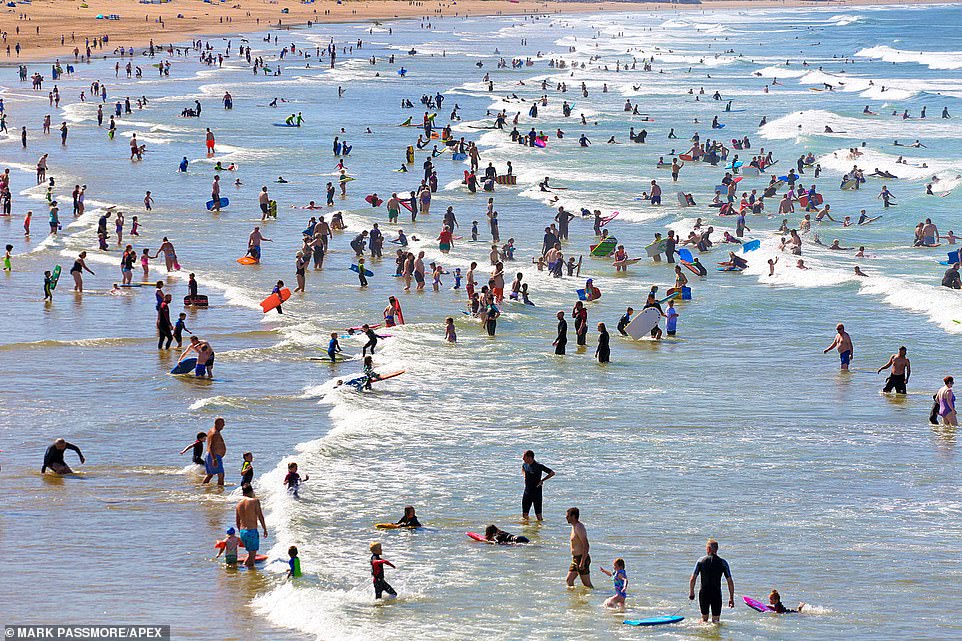 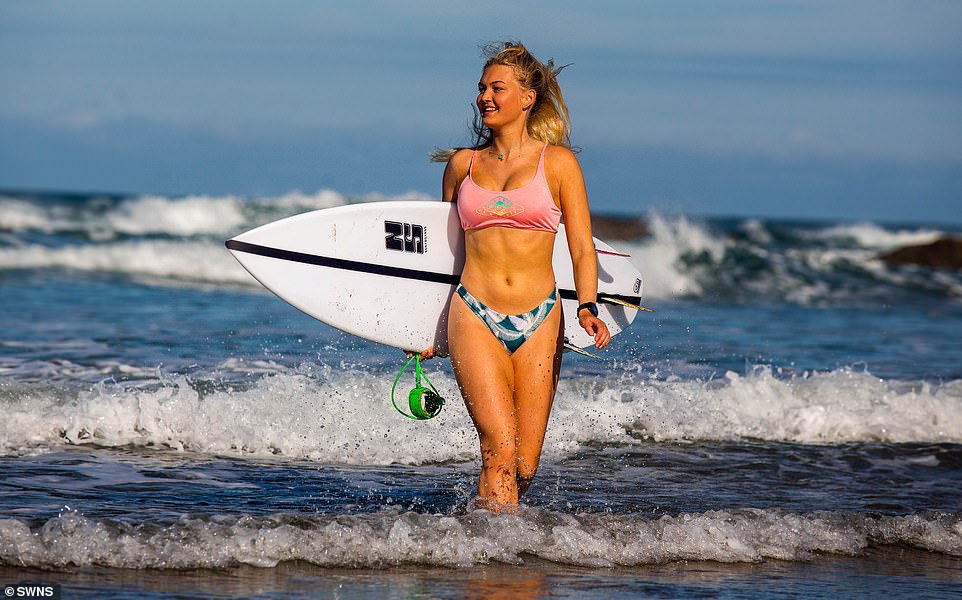 Many people are expected head to the beach to enjoy the warmer weather over the Bank Holiday Weekend (Pictured: Lily Mandeville, 18, enjoying the surf ahead of long weekend) 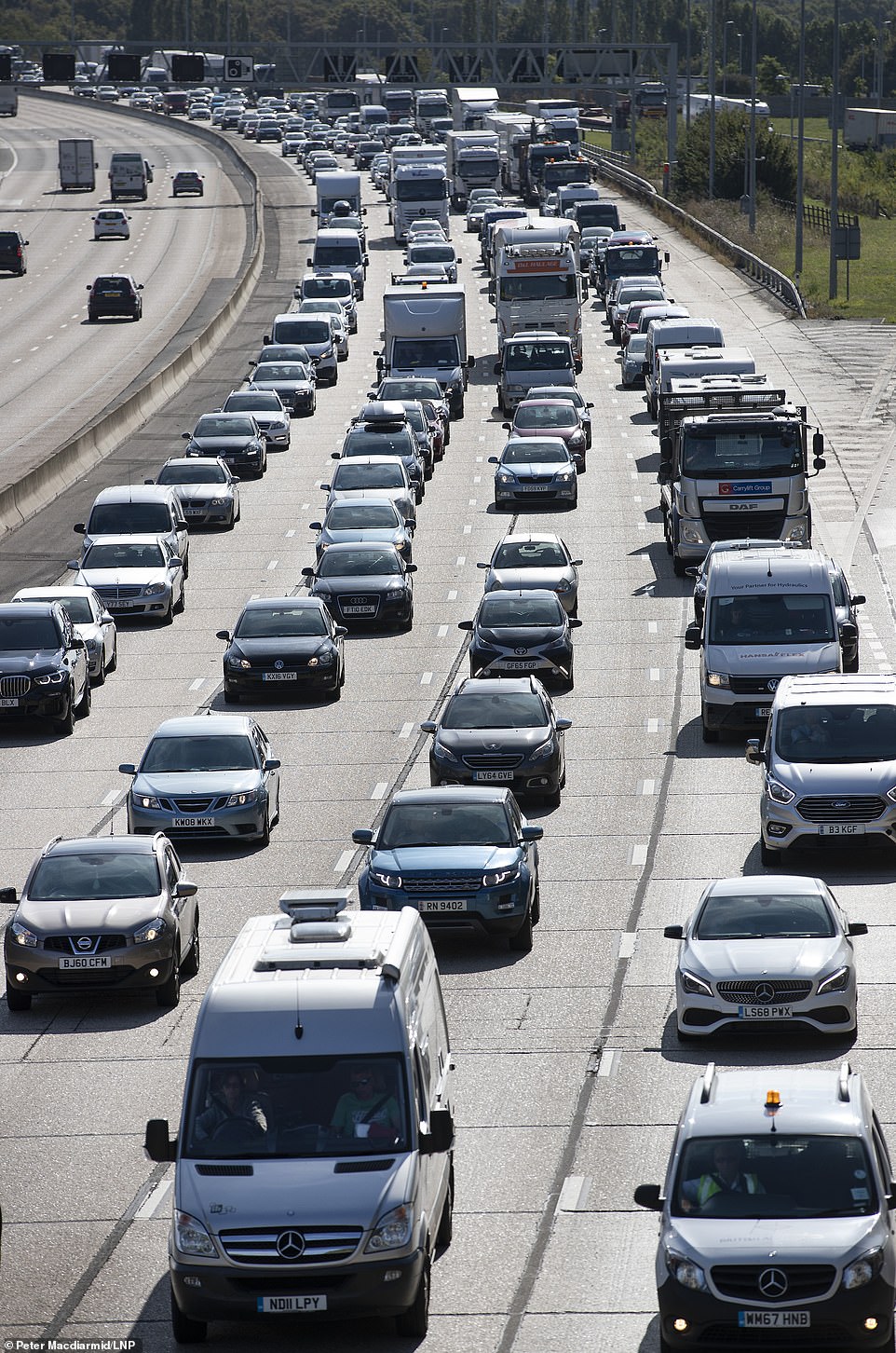 Friday is also expected to see five million drivers embarking on journeys for a holiday or day-trip ahead of the weekend (Pictured: traffic building up on the M25 near Cobham in Surrey)

The region with the highest temperatures are likely to be across eastern England, while the west will be less hot Sunday.

By Monday fresh and cool is expected to move a gradually move east across the country, but it will continue to be very warm for some eastern region, the Met said.

The Met has also advised high risk groups such as the elderly and young children to stay out of the sun.

They also advised people to keep their homes as cool as possible by keeping windows shaded or shut during the day and later open when it’s cooler at night.

‘Keep drinking fluids. If there’s anybody you know, for example an older person living on their own, who might be at special risk, make sure they know what to do,’ they added.

Friday is expected to see five million drivers embarking on journeys for a holiday or day-trip ahead of the bank holiday weekend. 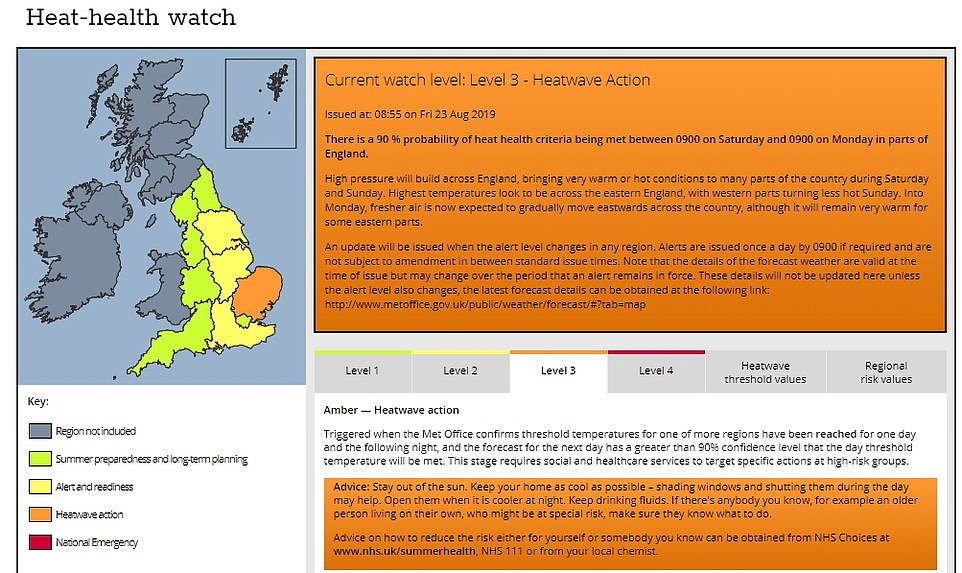 Public Health England issued a national heatwave level three heatwave action between Saturday to Monday across the country, particularly from the east where the temperatures are expected to be higher than the rest of England 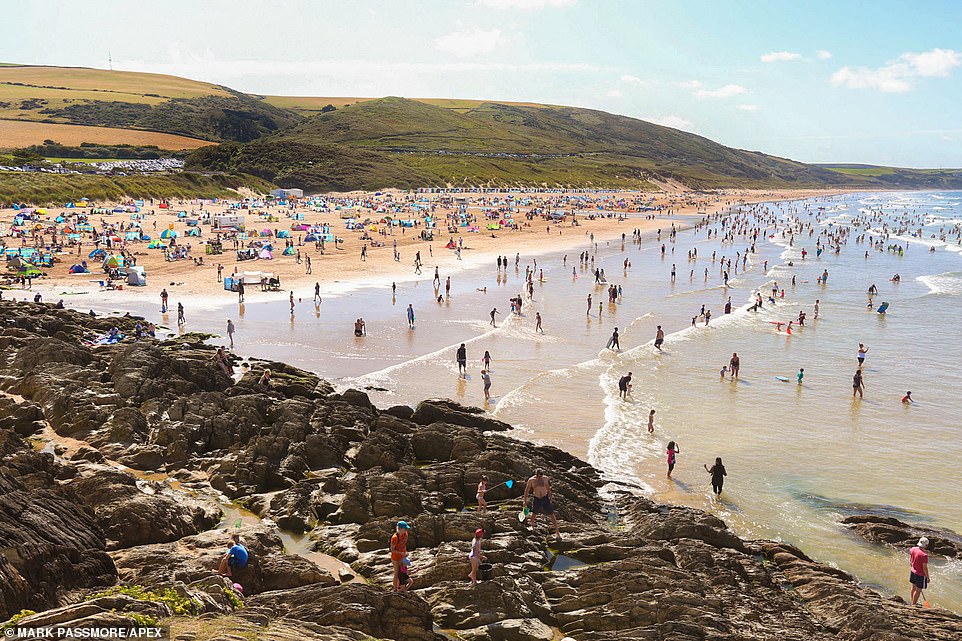 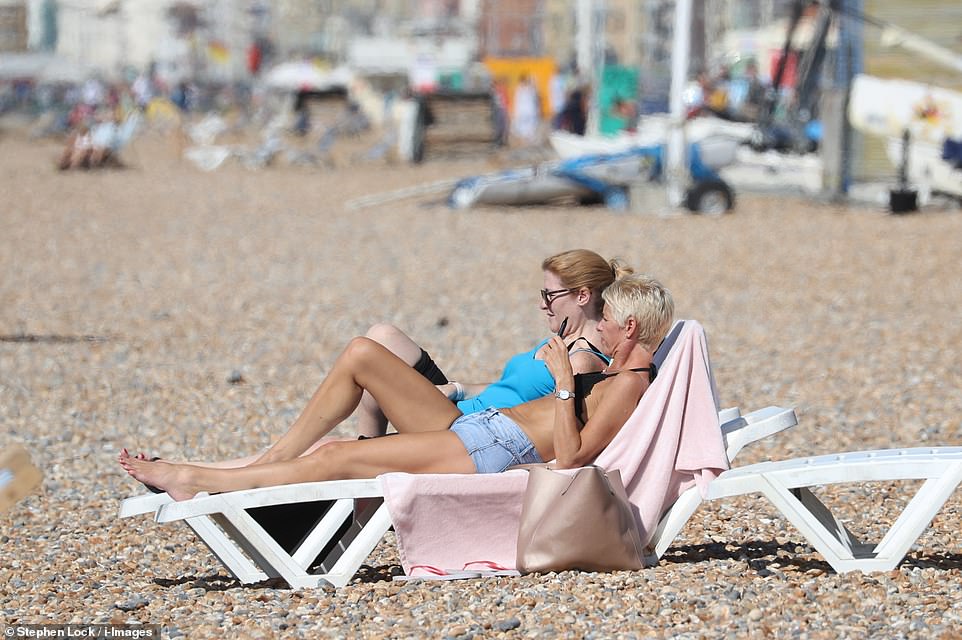 The warmer weather comes just in time for the long weekend after an appalling August that saw approximately 94mm (3.7in) of rain fell across the UK between August 1 and 17 – about 5 per cent above the national average for the entire month (Pictured: two ladies soaking up the sun on a beach in Brighton) 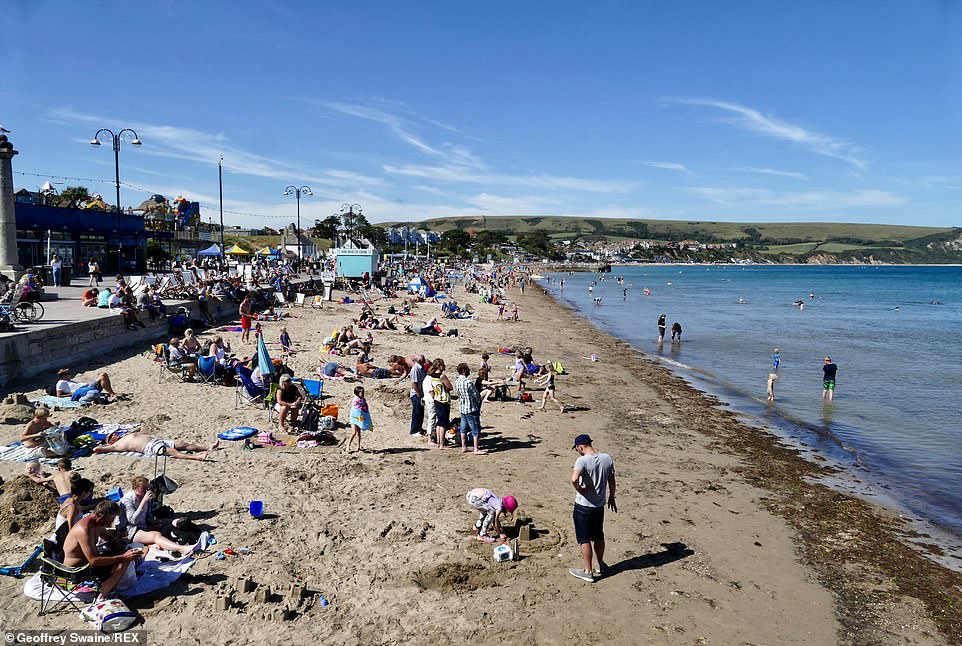 The Met has also advised people to keep hydrated with water and for high risk groups such as the elderly and young children to stay out of the sun (beach goers in Swanage, Dorset) 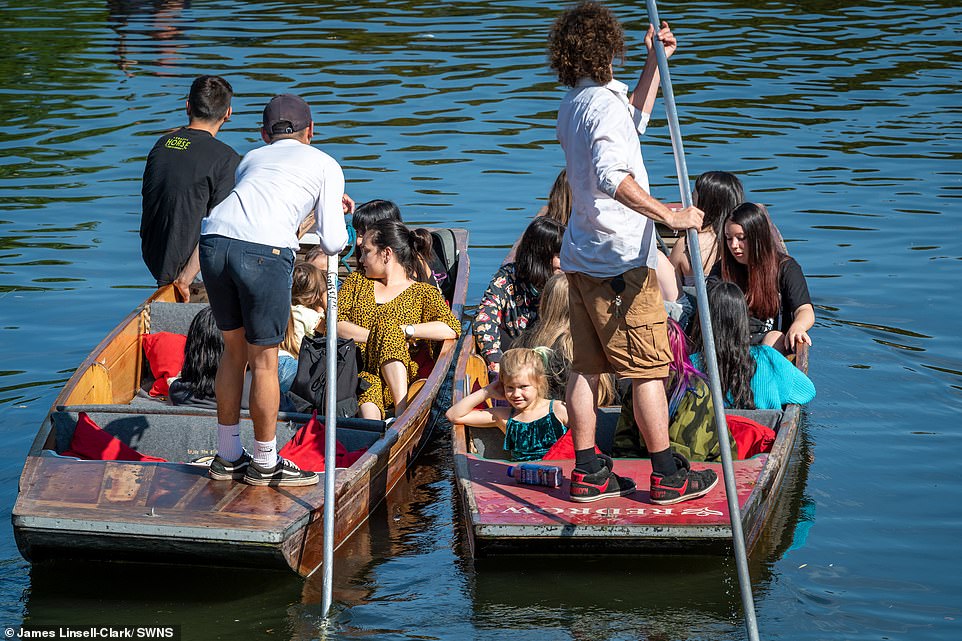 Groups are pictured punting with two men taking on the hard task of steering the boats in Cambridge this morning. The city is expected to reach highs of 29 degrees tomorrow 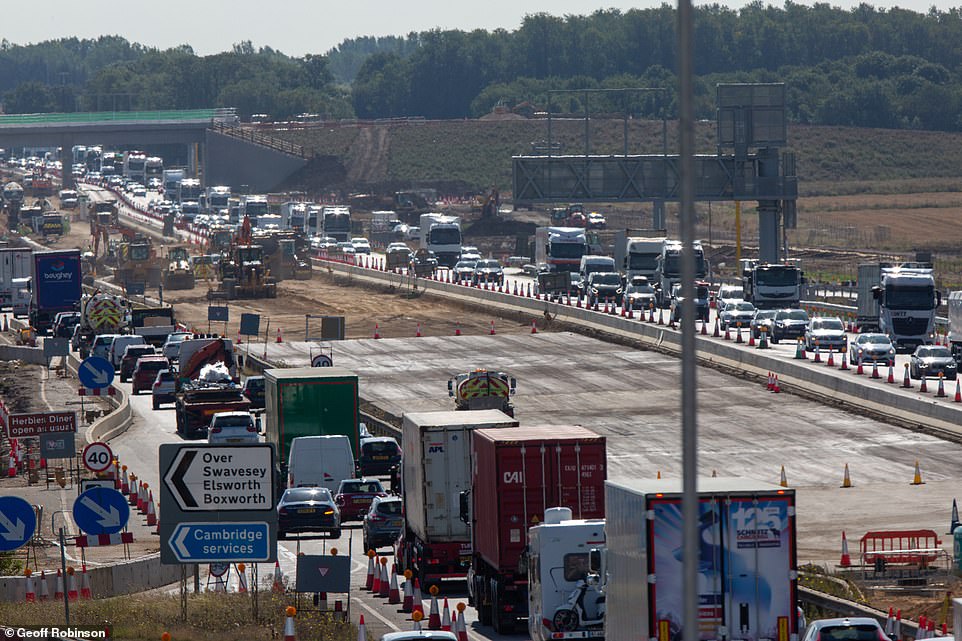 Congestion has begun to build up on the road as people getaway for the long weekend (Pictured: Traffic on A14 near Cambridge) 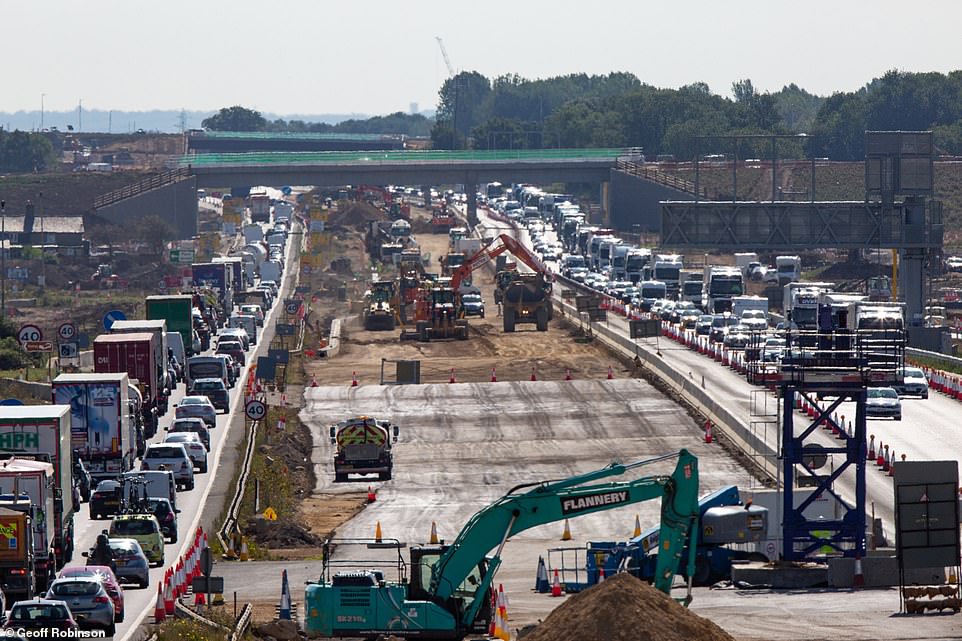 As road work appears to continue on the A14 near Cambridge, traffic can be seen building up on the road as drivers try to beat the impending after work rush hour. Rail travellers have also been warned to expect delays, with the closure of London King’s Cross and reduced services on parts of the rail network 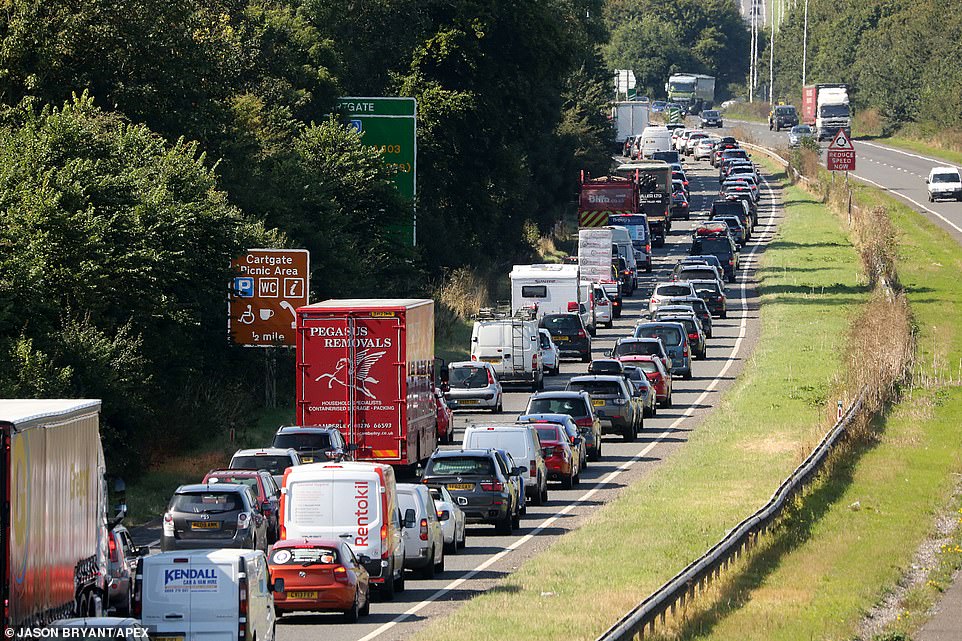 Among those expected to enjoy the hot weather are music lovers making their way to Bramham Park for Leeds Festival.

From Friday afternoon, south-easterly winds will draw warm air from Europe towards the UK, bringing rising temperatures along with dry and settled weather.

Temperatures will rise to 79F in London and 75F in Cardiff and the rest of the UK will be largely dry with lots of sunshine, according to the Met Office.

In Scotland, however, there will be a series of showers with the north-west being the most affected area.

By Monday, temperatures may reach 91F in southern England – which would set a new record for the late bank holiday weekend.

The highest record temperature for the late August bank holiday weekend is 31.5C (88.7F) at Heathrow Airport in 2001.

The sunny spell could set a swathe of new records around the country, with the current hottest late summer bank holiday in Wales standing at 27.3C (81.1F) at Velindre, Powys, in 2013.

Monday is not a bank holiday in Scotland.

Weeks earlier in July, Britain experienced its hottest ever day, with 38.7C (101.7F) recorded in Cambridge on July 25. July also broke global records as the warmest month ever recorded worldwide.

The Met Office is predicting largely warm and dry weather to continue in southern Britain for the rest of the month and into September, although there could be rain at times further north and west.

The heatwaves comes after heavy rain and thunder have made life miserable during the first few weeks of August with flash floods and power cuts.

Approximately 94mm (3.7in) of rain fell across the UK between August 1 and 17 – about 5 per cent above the national average for the entire month.