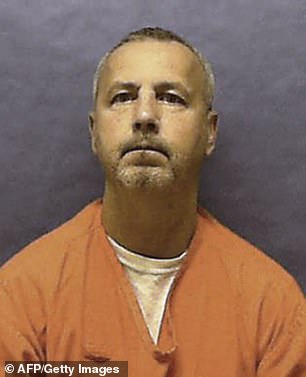 Gary Ray Bowles, a serial killer who preyed on older gay men during an eight-month spree that left six dead, was executed by lethal injection Thursday at State Prison.

The sentence was carried out at 10:58pm, according to the office of Governor Ron DeSantis.

Bowles, 57, was initially due to be executed at 6pm, but was delayed for nearly five hours as justices of the Supreme Court deliberated his final appeal.

They rejected the last-minute plea around 10pm, after Bowles had eaten his final meal consisting of three cheeseburgers, fries and bacon.

Bowles received the death penalty for the November 1994 murder of Walter Hinton in Jacksonville Beach, Florida.

However, Hinton was Bowles’ sixth and final known victim in a series of killings in an eight-month span that terrorized the Interstate 95 corridor and won him the nickname the ‘I-95 killer.’

The murder spree began in March of that year, with Bowles strangling John Hard Roberts – an older gay men with whom he was living in Daytona Beach.

From there, he continued to target older gay men, with victims in Maryland, Georgia and other parts of Florida. He met most of his the men he killed in gay bars.

In each case, Bowles had a signature: He stuffed the victims’ throats with objects – towels, rags, toilet paper, dirt, leaves and even a sex toy.

Investigators say if he hadn’t been caught, he would have kept on killing.

‘He probably enjoyed it after a while,’ Thomas Youngman, a Daytona Beach detective assigned to the Roberts murder, told Associated Press.

‘Why do you kill people after the first one? The first one could be a mistake, maybe. But then the second, all right, I’ll maybe give you that. But the third, fourth fifth and sixth? When do you stop?’

It wasn’t hard for Daytona Beach police to figure out who killed Roberts , the first victim in March 1994: Bowles left a probation document at the scene and also was caught on an ATM camera trying to withdraw money from Roberts’ account. What proved more difficult was capturing him, something they were unable to do until after five other men in three states had been slain.

He entered the FBI’s Ten Most Wanted List before he was finally captured.

Bowles was raised in West Virginia, where he experienced drugs and violence at a young age.

His father was a coal miner who died of black lung before he was born. His mother remarried multiple times, and his first two stepfathers were abusive, according to court records. He left home at 13.

Investigators say Bowles survived by letting gay men perform sex acts on him for money, though he has maintained he is straight,

‘I had a question about him being gay. He told me he was not, and I said, ‘What do you describe yourself as?’ He said, ‘A hustler,” Youngman said. ‘He’d befriend these old guys and have sexual relations with them, but I think they performed on him. He said he did not perform on them.’

Bowles also had a history of violence against women.

He was convicted of beating and raping his girlfriend while living in Tampa in 1982 and sentenced to eight years in prison. The victim had severe injuries, including tears on her vagina and anus.

According to Pink News, Bowles told police he moved in with a new girlfriend and resumed gay sex work after he completed his prison sentence for the 1982 rape.

His girlfriend became pregnant, but had an abortion after learning Bowles was intimate with men for money.

Bowles told police he blamed gay men for the abortion, leading him to target them for murder.

Trump intensifies his attacks on Chief Justice Roberts
Maryland man gets 10 years in prison for stealing 10 cigarette packs he tried to sell for cash, gas
Illegal immigrant, 20, detained for impregnating an 11-year-old girl in Phoenix
New York doctor warns coronavirus cases will surge in the thousands by next week
Long Island couple, aged 24 and 25, are found dead in murder-suicide in their home
Coronavirus US: Trump slams Republicans who criticise briefings
Trump says White House protesters would have been met with vicious dogs and ominous weapons
Sins of the sex-obsessed Jesus of Siberia