A mother has captured hilarious photos of her daughter before and after her first day of school.

Lucie, five, from , Scotland, looked prim and proper in her uniform for her first day of school as she posed for a photo with her big brother.

She looked excited to be heading off for her first day, showing off her beaming smile, shiny shoes and the bow in her hair.

But in a matter of hours, Lucie was no longer bright-eyed and bushy-tailed. 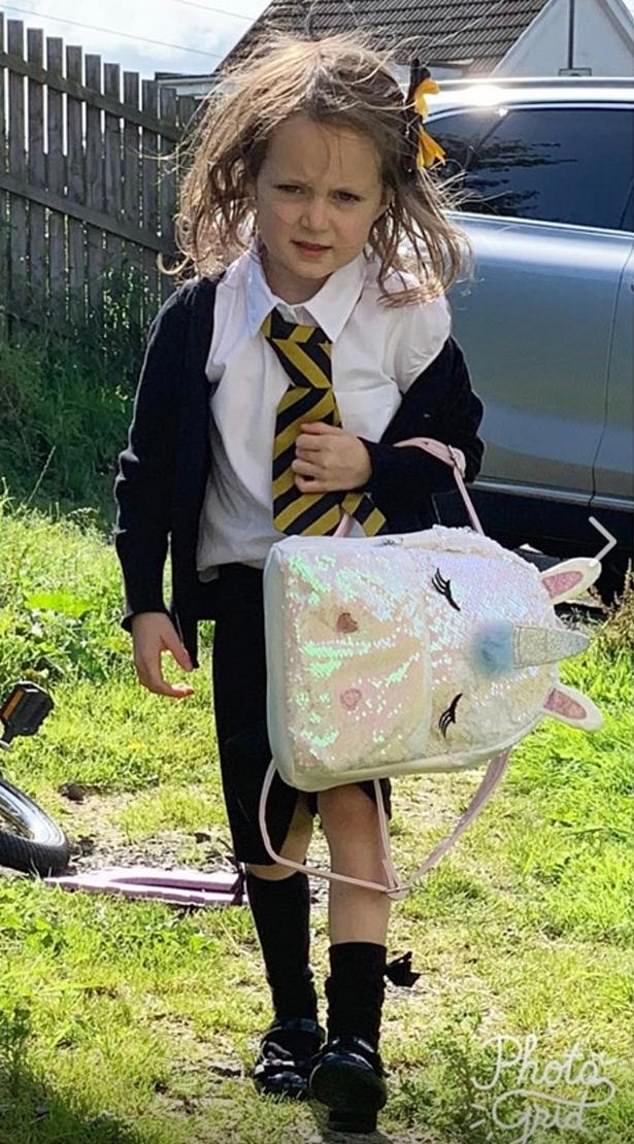 Mother-of-four Jillian, from Glasgow captured hilarious before and after photos of her daughter’s first back at school. In the photo, Lucie, five, came home looking tired and dishevelled as she lugged her unicorn backpack by its strap

Her mother Jillian captured a hilarious after photo showing her daughter looking like she had a rough first day.

Before going to school little Lucie, looked prim and proper in her uniform, posing for a photo with her big brother

In the picture, a tired-looking Lucie lugs her unicorn backpack by its strap.

The schoolgirl’s ribbon is out of place, her tie undone and her socks uneven.

Her mother Jillian told : ‘She had her skirt round her ankles almost and a bow at the back of her hair.

‘I think her clothes were too big slightly and she was pleased to see her friends.’

‘I did say to her, “What did you do today?” and got usual reply all children give, “Oh, nothing much,” the mother-of-four said.

‘She’s the smallest and is a wee madame. But she is normally very shy. Except when she’s around her brothers.’

Jillian added that her little girl was quite tired after a big first day and went to bed earlier than usual.

Students in Glasgow broke up for summer holidays in late June and returned to school on Wednesday, August 14.

Most children around the UK are in the final weeks of their summer holiday and will return to school in the first week of September.