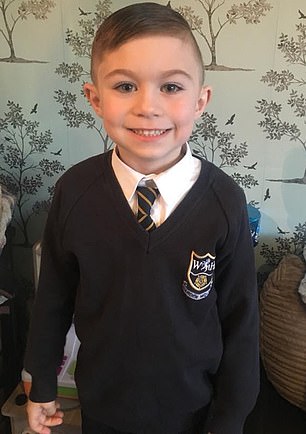 Lucas Dobson, six, fell into the water on Saturday while on a ‘family fishing trip’

Lucas Dobson’s family have paid tribute to their ‘little man’ and branded the world a ‘cruel place’ after police confirmed a body found in a Kent river was the six-year-old.

Lucas went missing on Saturday afternoon after he fell into the River Stour in Sandwich, Kent, while on a fishing trip with his family.

His cousin Chloee Martin told others to ‘cherish the good in life’ as she paid tribute to the youngster.

She said:  ‘Rest in peace little man, gone way to soon. Nanny will look after you. I love you much and I’ll cherish the memories forever.

‘Life is so important so is family. Cherish the good in life. You don’t know what’s round the corner. I little accident is all takes!

‘This world’s a cruel place it really is. But I’m so thankful for the thousands of support through the journey of finding my little cousin.

‘Took time but we can now say our goodbyes and lets him rest now.’ 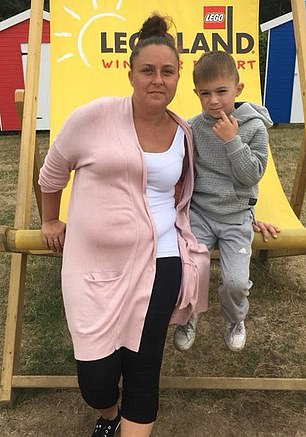 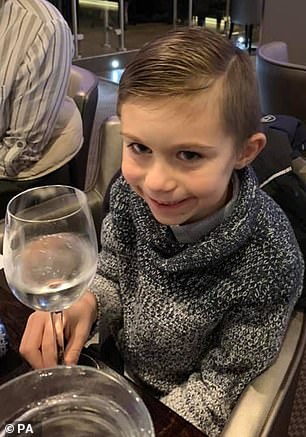 Lucas, pictured left with his mother Kirsty Furze, fell into the water at 1.20pm on Saturday

Lucas’ uncle Lewis Tolman had earlier taken to Facebook to confirm the youngster had been found.

He wrote: ‘I would like to say that Lucas has been found and confirmed by the hospital and parents.

‘I will have more to say but I need time but I think you all know how much Kent as a community has touched my heart and the UK and even the world thank you all so much xxxxxxxxxxxxxxxxxxxx.’

Kent Police chief inspector Mark Weller confirmed that formal identification had taken place, and the body is that of missing Lucas, who was discovered at 9.15am today.

He said: ‘It brings an end to our search and I would like to echo Lucas’ family’s message of thanks to those who came out to help search for him in the last few days.

‘The community support we have witnessed has been heart-warming, even in the most tragic of circumstances.

‘I’d also like to recognise the efforts of our partners from Kent Search and Rescue, Kent Fire and Rescue Service, HM Coastguard, the Royal National Lifeboat Institution and all the volunteers who assisted in the search for Lucas. 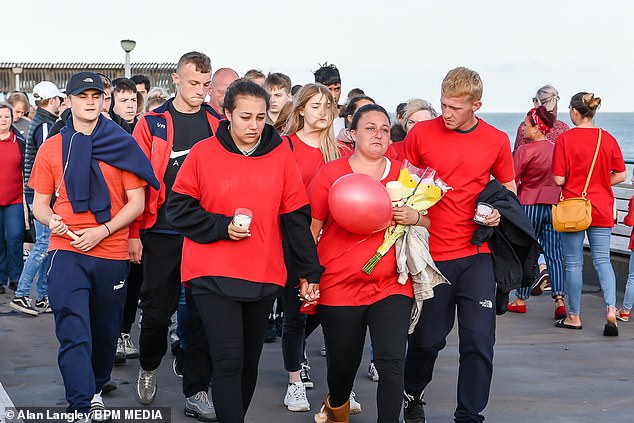 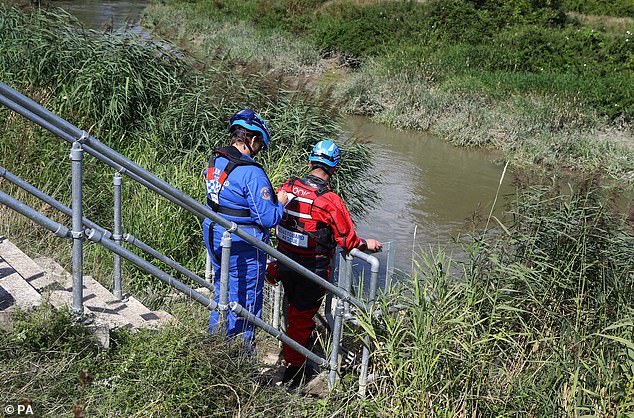 ‘While the search may have ended, our support to Lucas’ family continues.’

After Lucas fell in on Saturday, his father Nathan and two adults jumped into the water in to try to rescue him but he was swept away by a strong current.

More than 200 volunteers helped in the search, with some coming from outside the county to take part in the rescue.

They gathered in groups and searched areas near the River Stour alongside police officers, Kent Fire and Rescue Service crews and HM Coastguard.

Chief Inspector Mark Weller of Kent Police said: ‘This is a deeply tragic and upsetting incident for all concerned, and Lucas’ family are understandably devastated.

‘We were inundated with offers of assistance from members of the public, who turned out in large numbers to help search for Lucas.

‘I know his family are very grateful and touched by the support provided, and I too would like to offer my own personal thanks.

‘I would also like to recognise the efforts of our partners from Kent Fire and Rescue Service, HM Coastguard, the Royal National Lifeboat Institution and others who assisted in the search for Lucas.’

Initial police enquiries continued today, but the force said the death was not being treated as suspicious. 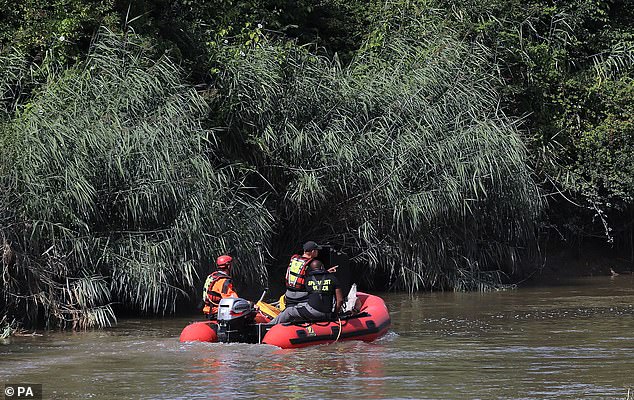 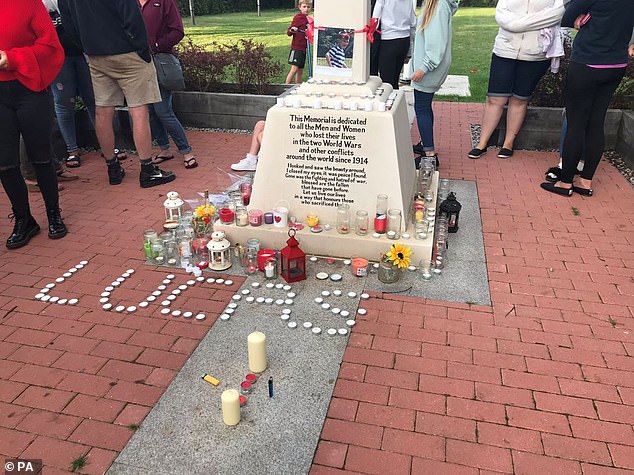 A vigil yesterday in Aylesham for Lucas, where about 200 people attended and many wore red

Yesterday, Mr Weller said the support from volunteers had been ‘incredible’, enabling officers to quickly search a wide area and to rule out several locations.

On Monday night, Lucas’s aunt, Maciee Stanford, shared a post on Facebook showing pictures of her and Lucas and candles that were lit by members of the community in support of the family.

She wrote: ‘Our community is strong and has helped us as much as they can through this hard time for my family and I. 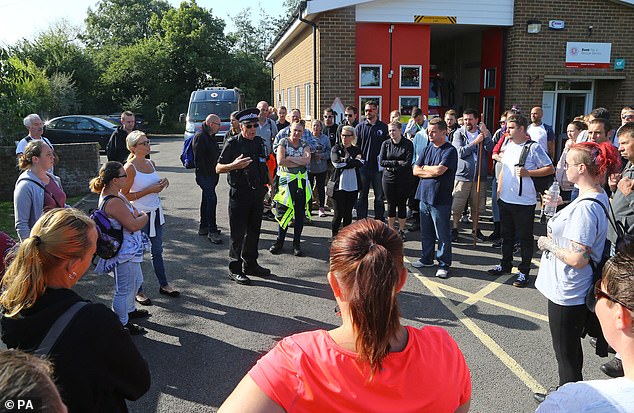 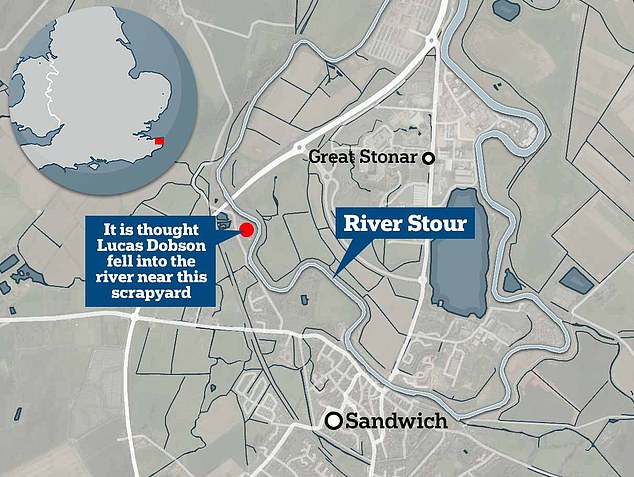 ‘I cannot begin to express how grateful we are for every single person out there that has turned up shared likes donated anything because it all helps it really does.’

Vigils were held in towns across the South East of England for the missing schoolboy on Monday, while Twitter users shared images of lit candles under the hashtag #LightUpTheCoastForLucas in solidarity with his family.

CJ Barr, 16, attended a gathering in Aylesham, which she said was attended by around 200 people who were asked to wear red – Lucas’s favourite colour.

‘It was a lovely environment to see everyone in red and putting their candle down for Lucas,’ Miss Barr said. ‘I hope the vigil shares how positive everyone needs to be.’