has ‘ruined’ 150,000 holidays and work trips already this year by delaying or losing baggage.

The airline admitted the figure when responding to a customer complaining about their bags being delayed.

In a tweet, BA confirmed it had transported 15 million bags between January and June 2019 and ‘one per cent’ had been delayed or misplaced.

It comes after holidaymakers have hit out at the airline over their missing baggage, with many saying the company spoiled their trips.

And the beleaguered airline is also dealing with the threat of strikes and a litany of IT problems that have affected flights in recent weeks. 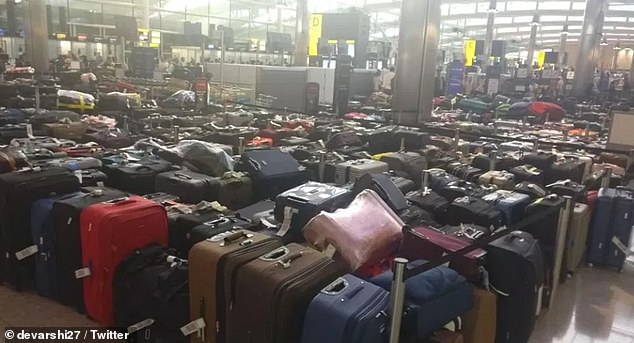 British Airways has admitted that one per cent, or 150,000, of the 15million bags it has transported in the first part of the year have been delayed

The airline made the admission on Twitter, adding the figure would not ‘mitigate the inconvenience’ to passengers

Dave Gracie and Jo Cook said their honeymoon was ruined earlier this month after British Airways lost her suitcase on the way to the Seychelles.

The couple found the case had been flown to Doha and the Maldives by mistake, and only got the luggage the day before they left.

Mr Gracie, 38, said: ‘What has followed has been hugely frustrating and disappointing, and has gone a long way to wrecking the great honeymoon we had planned.

‘We still have no explanation why the bag was lost in the first place, why it was sent elsewhere, and why it is taking nearly a week to be returned to us, when I could have flown back and forth to London FIVE times in the same period.

‘For the upset, inconvenience, loss of irreplaceable honeymoon celebrations and memories, and the total lack of customer care, I write this largely to try to get BA to give a toss.’

Marketing company owner Sue Duris, 57, was travelling from Heathrow to Edinburgh last week on business but her bag did not arrive with her in Scotland.

Ms Duris, of Guildford, Surrey, was told her case would arrive the next day in Edinburgh, but after rushing to the the airport she was informed it was at Heathrow.

MP Ellie Reeves previously blasted the airline for losing her luggage on a trip to Bologna two years in a row, pictured

She flew home and went to pick up her case, but was then told it was in Scotland after all.

Ms Duris said: ‘It took me a week to be reunited with my bag. I’m a loyal BA customer or I was – I was told when I left Heathrow the bag would be expedited, it never was.

‘I felt like they were telling me: “Tell it to someone who cares”.

‘No compensation was offered, other than wanting me to take a survey which I gave them the worst rating I could, because they didn’t resolve my issue and it appeared they didn’t care to resolve it.’

Numerous passengers have also complained on Twitter about luggage being lost repeatedly.

Lewisham MP Ellie Reeves, who is six months pregnant, said BA lost her bag on a trip to Bologna in Italy for the second year in a row.

She wrote on Twitter: ‘So apparently British Airways, a multinational company with huge profit margins, cannot find a courier in all of Bologna to get a bag that they lost, to a pregnant customer and her 4-year-old until some time on Monday.

‘I expect they could if they actually cared.’

BA has also been beset with IT problems throughout the year, which has caused some bags to be delayed.

Which? – the consumer rights charity – said passengers who lose luggage should immediately log a complaint with their airline.

A spokeswoman said: ‘Baggage is one of the biggest areas of complaint for air passengers.

‘Mishandled luggage means inconvenience and frustration for individuals – and it can be costly too.

‘Passengers arriving at their destination without their bags should log a lost luggage complaint with the airline as soon as possible and keep any receipts for essential items purchased as they should be able to claim back these costs.’

A British Airways spokesman explained baggage delays can be caused by a number of factors outside the airlines control.

He said: ‘We are a large global airline with hundreds of flights operating every day, and on the rare occasion that baggage is delayed, it is returned to the owner within a few hours in the vast majority of instances.’

The airline apologised to the customers whose baggage was delayed.

Earlier this month the plans of up to 70,000 customers were thrown into chaos when its online check-in system crashed. More than 400 flights were cancelled or delayed, leaving BA potentially facing a £16million compensation bill.

Passengers were forced to go to check-in desks where staff tried to process the backlog manually.

It took BA ten hours to sort the problem out, but by then passengers were stranded in Japan, Paris and the US.

BA has been plagued by previous IT issues. In 2017 a power outage at Heathrow stranded tens of thousands of passengers over the May bank holiday weekend.

The airline is also facing a record £183million fine after hackers stole the personal details of up to half a million passengers last year.

A threat of a pilots’ strike at BA still hangs over hundreds of thousands of Britons who have booked flights with the airline this summer. The protest involving around 4,000 workers at Heathrow, including security staff and engineers, will still go ahead if they reject an improved pay offer.

A walkout scheduled for the start of the month was suspended.

One of the world’s biggest airlines, BA made record profits of almost £2billion last year, flying more than 145,000 passengers a day.