Italian President Sergio Mattarella has accepted the resignation of Prime Minister Giuseppe Conte and will kick off talks with party leaders to seek a solution to the political crisis.

Mattarella asked Conte to remain in office to carry out day-to-day government business while the discussions continue.

The President will start his meetings at 4.00pm on Wednesday and wrap them up on Thursday afternoon. 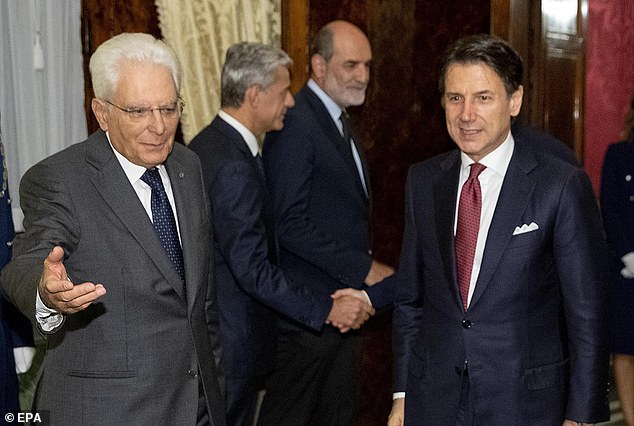 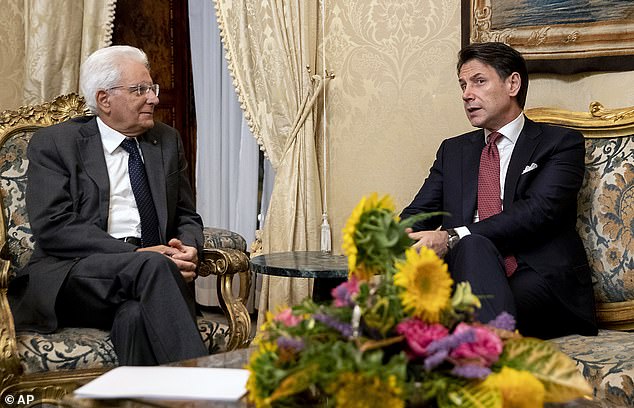 Mattarella will start his meetings at 4.00pm on Wednesday and wrap them up on Thursday afternoon

He is expected to see whether there is the political will to form a new government.

If not, he will have to dissolve parliament, 3-1/2 years ahead of schedule, and call early elections.

Conte also attacked Salvini – who sat smirking next to him – as an ‘irresponsible… opportunist’.

The move, which comes after the coalition partners rowed over migrant ships, could potentially trigger a general election as soon as October – which Salvini is hoping he can win. 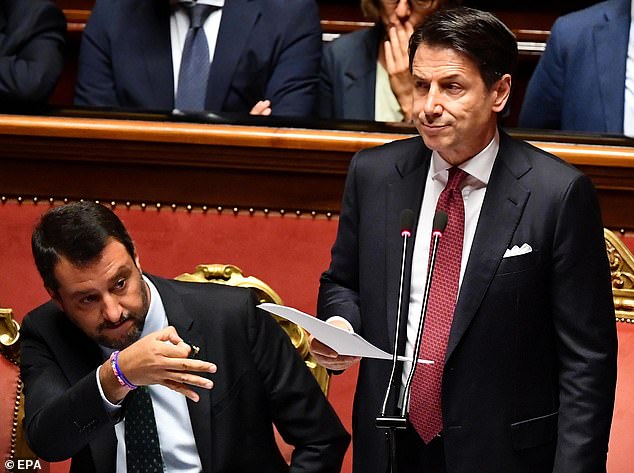 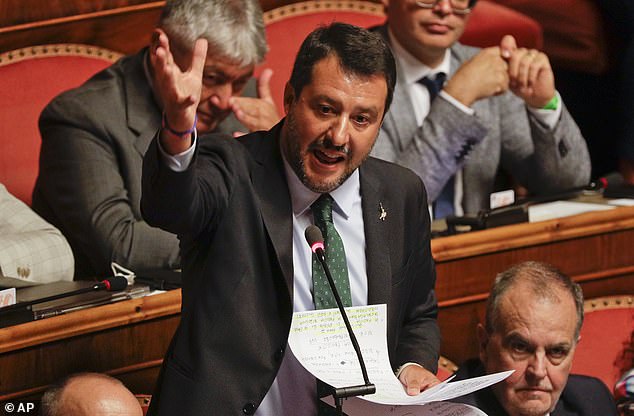 Conte’s resignation could trigger fresh general elections as soon as October, which Salvini (pictured) has been calling for after polls showed his party surging in support

Conte told senators that Salvini’s surprise move last week to seek a vote of no confidence in him was forcing him to ‘interrupt’ a productive government.

He said government reflected the results of Italy’s 2018 election and aimed to ‘interpret the desires of citizens who in their vote expressed a desire for change.’

Collapsing the government in the summer means that elections will be held in the autumn, a delicate budgeting period in Italy, Conte said.

He then blasted Salvini for showing ‘grave contempt for Parliament’ and putting Italy at risk for a ‘dizzying spiral of political and financial instability’.

He accused the League leader of ‘only looking after his own interests and those of his party’.

Taking the microphone immediately after Conte finished speaking, Salvini said he had no regrets and would ‘do what I did all over again’.

Sounding as if he was launching a general election campaign already, he then added that he wanted to give Italians ‘future of growth and prosperity.’ 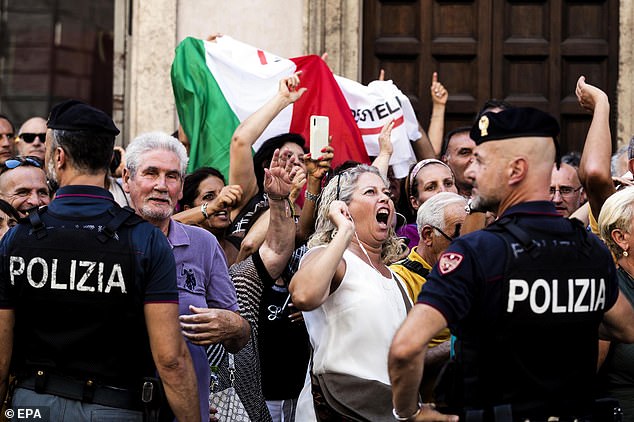 Conte will now present his resignation to President Sergio Mattarella, who can either order him to stay and find an alternative majority in parliament, or accept and see if another leader can forge an alternative coalition (pictured, protesters in Rome) 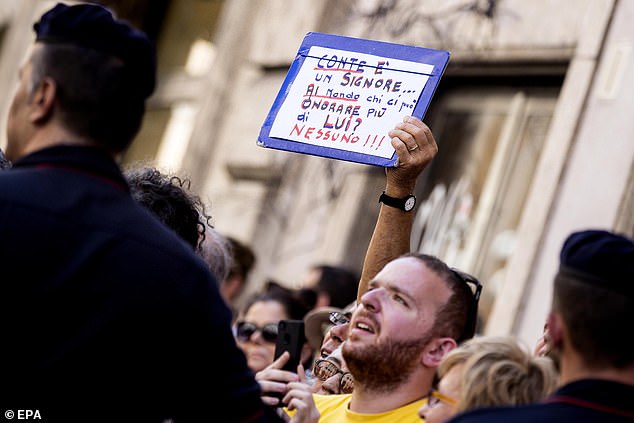 A protester in Rome holds a sign which reads: ‘Conte is a gentleman… who can honour us in the world more than him? Nobody!!!’

Mr Mattarella, as head of state, could ask Mr Conte to stay on and try to find an alternative majority in parliament, or accept his resignation and see if another leader can forge an alternative coalition.

Failing that, the president could dissolve parliament, setting the stage for a new general election as early as October.

Salvini, who has been governing in coalition with the Five Star Movement since June 2018, has been calling for fresh elections in recent weeks after polls showed his League party gaining support.

The party finished in second place in the 2018 general election, behind his coalition partner Five Star Movement – but new polls show he would now finish in front.

Conte, a law professor with no previous political experience until he became Prime Minister, said the prospect of Salvini taking over as Prime Minister is ‘worrying’.

Salvini, whose party ran on an anti-immigration ticket, triggered the current crisis when demanded that Conte sign an order banning migrant ship Open Arms from docking at Lampedusa. Conte refused. 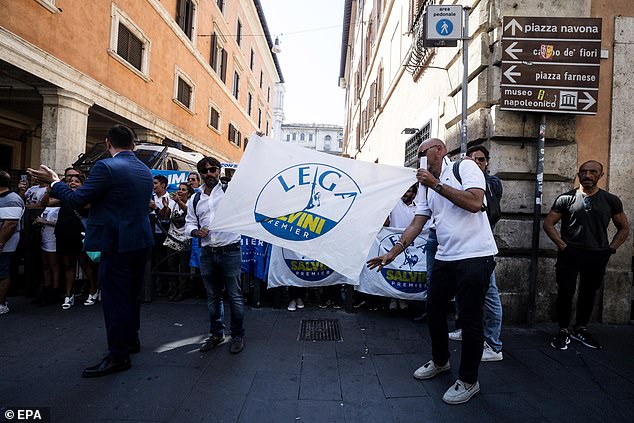 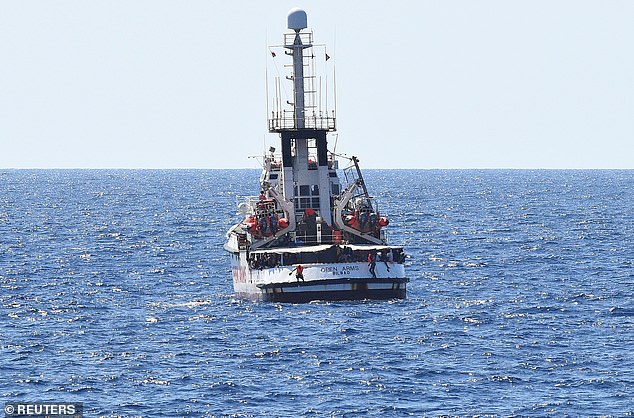 Conte and Salvini split when the Prime Minister refused to sign an order barring migrant rescue boat Open Arms from docking in Lampedusa. It has now been stranded offshore for 19 days, with migrants jumping overboard (pictured) and trying to swim to land

The ship, which is operated by charity Proactiva Open Arms, was ordered to moor off shore while the issue was resolved, where it was left sitting for 19 days.

In that time 10 migrants have jumped overboard in an attempt to swim to shore.

Moments before Conte gave his speech, Spain agreed to send a military vessel to escort the Open Arms to Palma, Mallorca, where the migrants could be offloaded.

Salvini had threatened to hold a no-confidence vote in Conte over the migrant, before the professor hit back – branding him disloyal and ‘obsessed’ with migrants.

Conte’s resignation heads off the possibility of a confidence vote.

Woman wants to exhume Princess Diana's uncle to prove she is related to British royal family
Chris Grayling: 'The last thing this country needs right now is a General Election'
BBC Newsnight's Emily Maitlis reveals she spotted Bill Clinton browsing the Kama Sutra
Husband and wife die after vulture crashes into them during motorcycle ride
Mother of two, 58, is awarded almost £400,000 after suffering sexual harassment from diplomats
HPV vaccine is 'near perfect' and up to 99.8% effective, study finds
Top psychologist busts the toxic myths holding women back in the bedroom
Keir Starmer rattles Boris Johnson over coronavirus response