Colin Kaepernick has taken a jab at Jay-Z’s comments that people have ‘moved past’ the kneeling protest he instigated in the NFL during the national anthem.

On Saturday, Kaepernick posted an image of teammates Eric Reid, Kenny Stills and Albert Wilson – all of whom have been critical about the comments made after it was revealed the rapper would partner with the NFL and become a majority stakeholder in a team.

The protest started in 2016, when Kaepernick refused to stand during the national anthem in protest against police brutality and racial inequality

All three players have continued to kneel in the years after Kaepernick started the protest against racial injustice.

He posted: ‘My Brothers @e_reid35 @kstills @ithinkisee12 continue to fight for the people, even in the face of death threats. They have never moved past the people and continue to put their beliefs into action. Stay strong Brothers!!’

It was announced last week that Jay-Z’s Roc Nation Sports company would be teaming up with the NFL to work on live entertainment and social justice initiatives.

also reported that the rapper is to take a ‘significant ownership interest’ in an NFL team.

At a preseason game on Friday, Reid said: ‘Jay-Z claimed to be a supporter of Colin. Wore his jersey. Told people not to perform at the Super Bowl because of the treatment that the NFL did to Colin. Now he’s going to be a part owner and it’s kind of despicable.’ 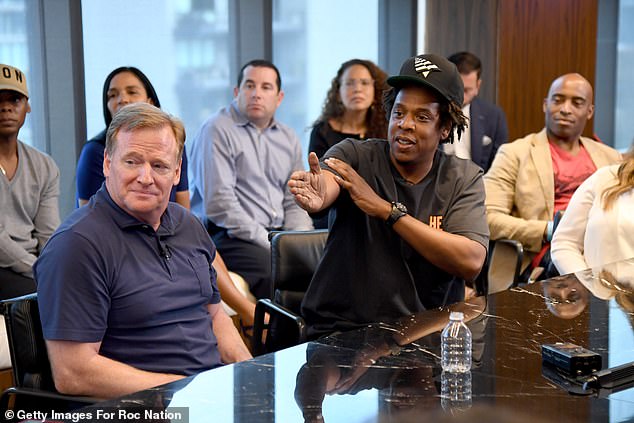 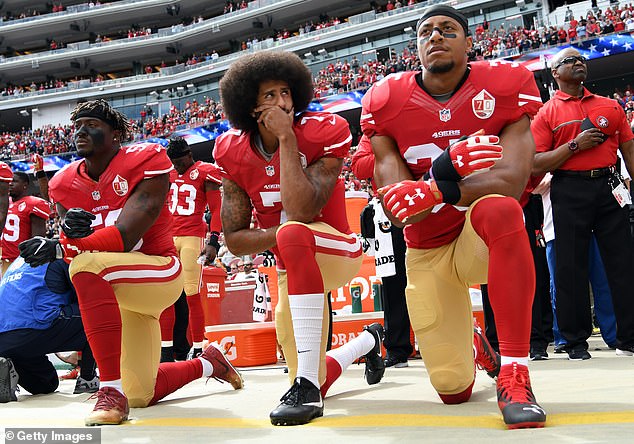 Jay-Z was slammed after saying ‘I think we’re past kneeling’, when asked about the protest last week.

When questioned about how he could enter into the business venture while Kaepernick remains unsigned, he said: ‘I think that we forget that Colin’s whole thing was to bring attention to social injustice so in that case this is a success – this is the next thing.

He added that ‘we get stuck on Colin not having a job … this is more than that’.

‘I support any protest that’s effective. I’m into action, I’m into real work – I’m not into how it looks from the outside. If protesting on the field is the most effective way, then protest on the field. But if you have a vehicle that can inspire change and speak to the masses at the same time, it’s hard to steal the narrative away,’ he said.

But Reid,  took aim at the rapper, saying: ‘For one, when has Jay-Z ever taken a knee to come out and tell us that we’re past kneeling?

‘Yes, he’s done a lot of great work. A lot of great social justice work. But for you to get paid to go into an NFL press conference and say that we’re past kneeling? Again, asinine.’ 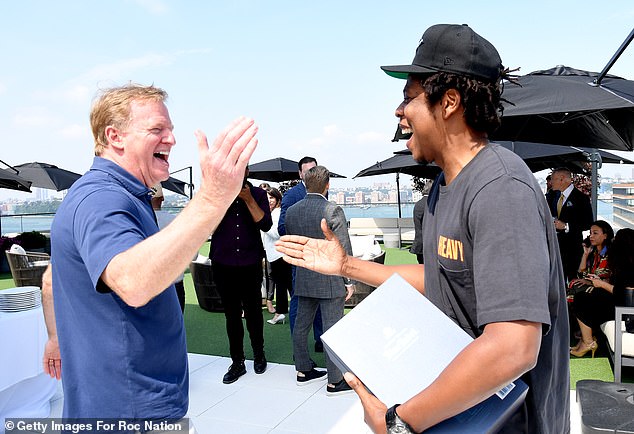 When asked how he could enter into the deal while Colin Kaepernick was unsigned, Jay-Z said: ‘I think that we forget that Colin’s whole thing was to bring attention to social injustice so in that case this is a success – this is the next thing.’ 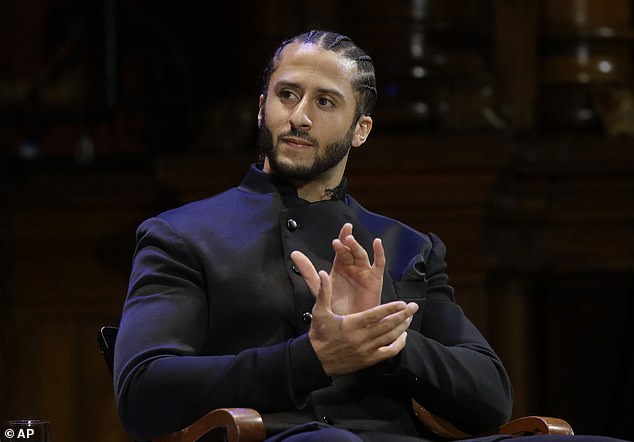 Kaepernick opted out of his contract with the San Francisco 49ers in 2016, but other NFL teams have avoided making him an offer and it’s speculated that the former quarterback has been blackballed for his actions

Reid continued: ‘Jay-Z made a money move. He’s capitalized on this situation. Nobody to my knowledge talked about social justice before Colin started protesting.

‘That was not a topic of the NFL off the field. For Jay-Z to come in and partner to address social justice, do it behind Colin’s back, get paid to do it … I don’t have words.’

Reid also suggested the NFL is using Jay-Z as cover for Kaepernick still not having an NFL job.

‘The (injustice) that’s happened to Colin, they get to say, ‘Look, we care about social justice, we care about the black community because we’re with Jay-Z.

‘Jay-Z is doing the work for them. We all know that it’s unjust that Colin isn’t in an NFL locker room, the way he lost his job. But they get to pretend they care about social justice.’

Reid himself kneeled before the game, where the Panthers lost 27-14 to the Buffalo Bills. 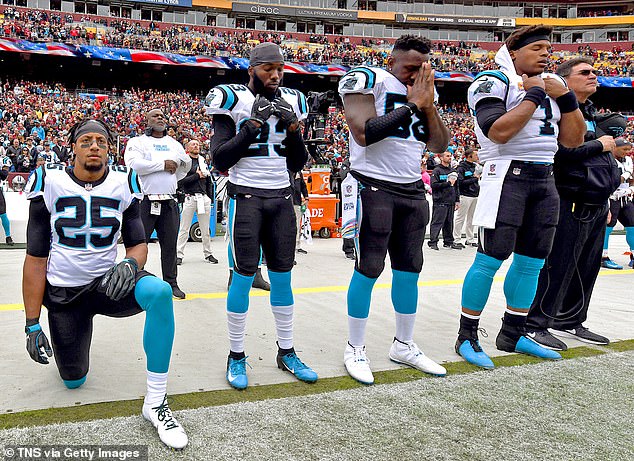 Kaepernick and Reid were among the first football players to begin kneeling during the national anthem at games, to draw attention to police brutality and racism.

Jay-Z has previously publicly supported Kaepernick and lambasted the NFL – reportedly going so far as to attempt to persuade fellow rapper Travis Scott to drop out of the 2019 Super Bowl halftime show over the league’s treatment of Kaepernick.

In August 2016, Kaepernick, then the quarterback for the San Francisco 49ers, remained seated during the national anthem for a preseason home game.

He told , ‘I am not going to stand up to show pride in a flag for a country that oppresses black people and people of color.’

The next month, Kaepernick kneeled for the first time and caused a movement that divided a nation.

Later that year, Kaepernick opted out of his contract with the San Francisco 49ers, but other NFL teams have avoided making him an offer and it’s speculated that the former quarterback has been blackballed for his actions.

Jay-Z suggested during the press conference on Wednesday that they had spoken with Kaepernick about the deal, but Kaepernick’s girlfriend said that was false.

Nessa Diab wrote on , that Kaepernick never spoke to Jay-Z and that it was a ‘lie’. 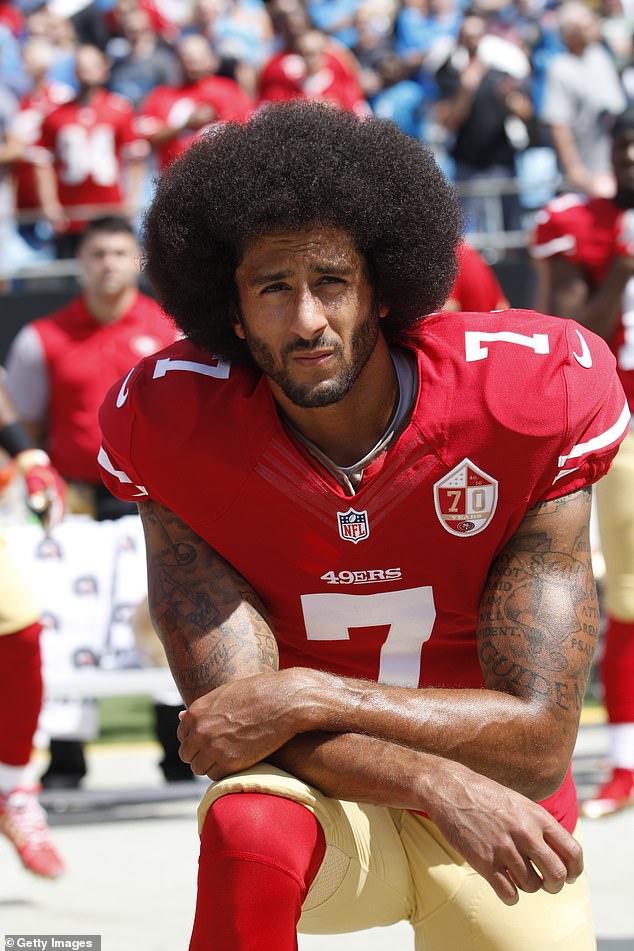 Today marks the three year anniversary of the first time I protested systemic oppression. I continue to work and stand with the people in our fight for liberation, despite those who are trying to erase the movement! The movement has always lived with the people! ✊🏾