President , his wife Melania and their son Barron have arrived back at the White House following their two-week vacation at his New Jersey golf club.

Trump and his family were pictured boarding Air Force One in New Jersey on Sunday afternoon after their summer vacation at his Bedminster golf club.

The trio arrived back at the White House a short time later and were spotted stepping off Marine One.

Trump held the First Lady’s hand as they made their way way across the South Lawn of the White House. 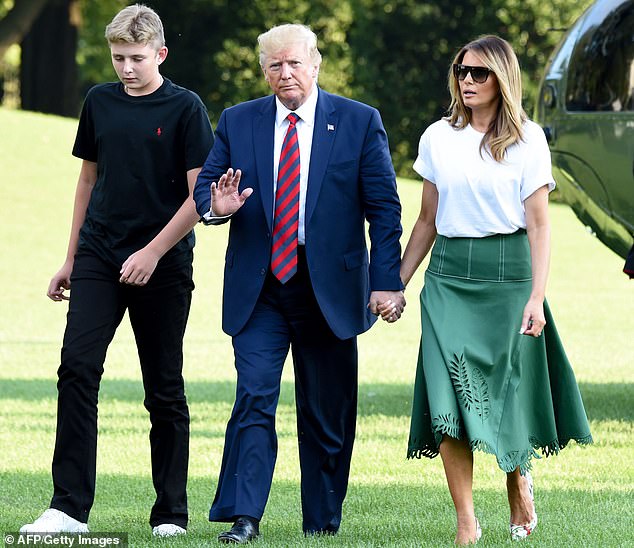 President Donald Trump, his wife Melania and their son Barron arrived back at the White House on Sunday evening following their two-week vacation at his New Jersey golf club 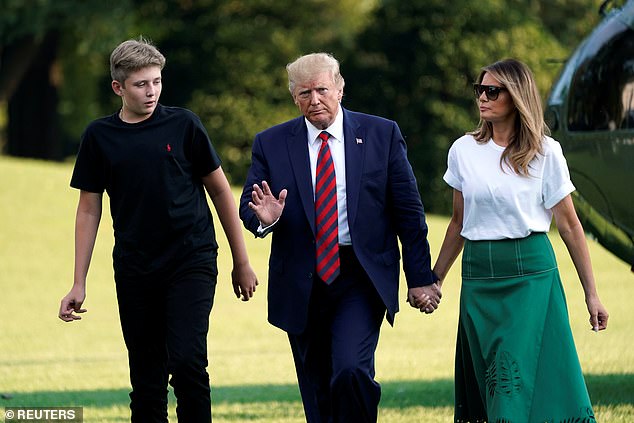 Their 13-year-old son Barron, who was wearing all black and white Nike sneakers, towered over the couple as they made their way back home.

Melania’s parents, Amalija and Viktor Knavs were also spotted getting off Marine One.

It came after Trump admitted that Apple’s CEO Tim Cook had made a ‘very compelling argument’ about how paying tariffs would make it difficult for his company to keep competing with the likes of Samsung.

Trump hosted the Apple CEO for dinner at his golf club in Bedminster, New Jersey on Friday.

He revealed on Sunday that Cook had spoken of how difficult it would be for Apple to compete with Samsung if his company had to pay tariffs. 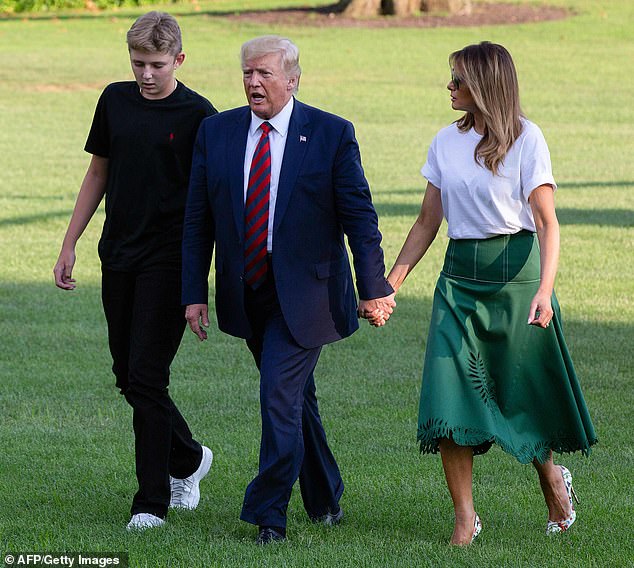 Melania arrived back at the White House in a forest green skirt, a casual white t-shirt and her floral Christian Louboutin stilettos 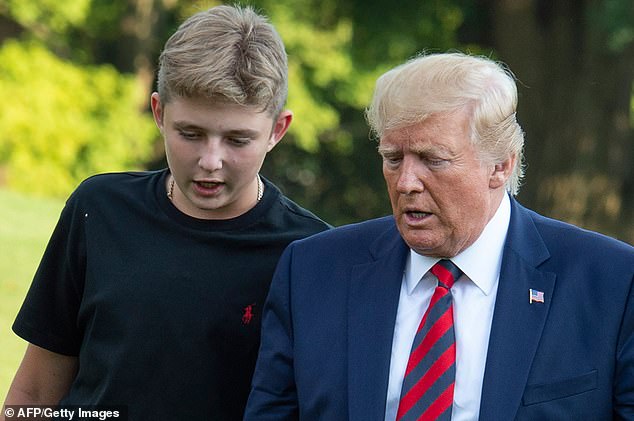 Barron, who was dressed in all black and was spotted wearing a chain necklace, towered over his father as they made their way back to the White House 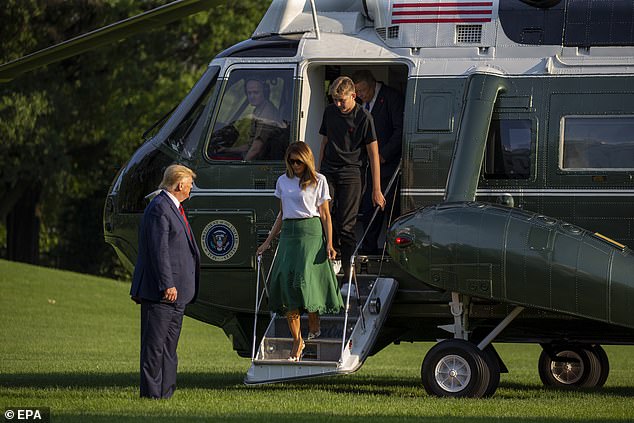 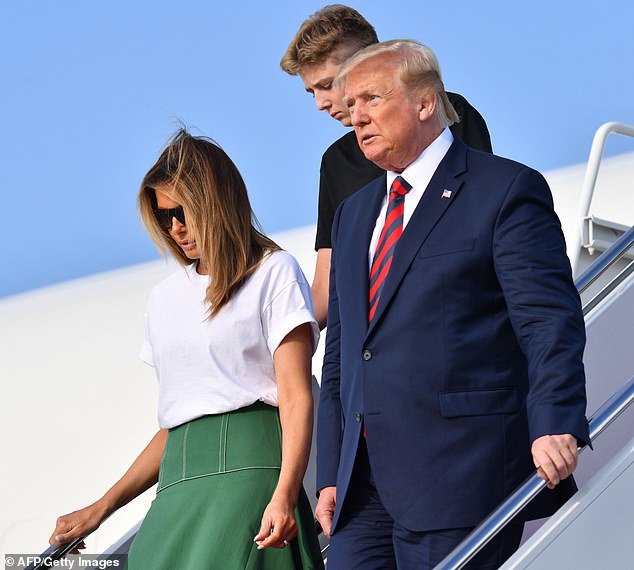 Cook said Samsung did not face the same hurdle because the majority of its manufacturing occurs in South Korea, Trump said of their conversation.

‘I thought he made a very compelling argument,’ Trump told reporters on Sunday.

Trump has ordered 10 percent tariffs on $300 billion in goods being imported from China.

His meeting with Cook came just one day after Apple announced it had invested about $60 billion in the U.S. and currently employs some 90,000 people in the country.

Many of the tech giant’s products are assembled in China and the company opposes incoming tariffs – an issue Trump is fixated on – of 10 percent on goods manufactured in China, which is due to come into force on September 1.

In response to that news, Trump tweeted ahead of their meeting: ‘Having dinner tonight with Tim Cook of Apple. They will be spending vast sums of money in the U.S. Great!’

Trump has previously rejected Apple’s calls for an exemption on its products, tweeting in July the company should, ‘Make them in the USA, No Tariffs!’

His administration announced last week that tariffs on some goods would be delayed until December. 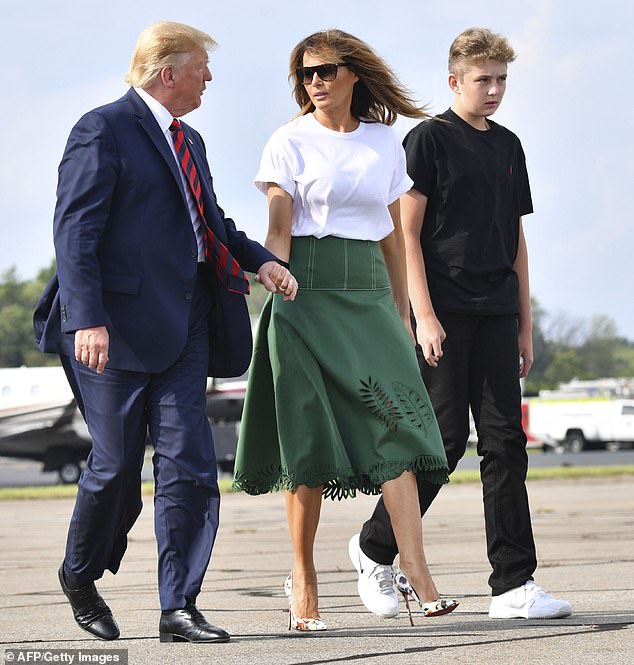 The family had spent about two weeks vacationing at Trump’s golf club in Bedminster, New Jersey 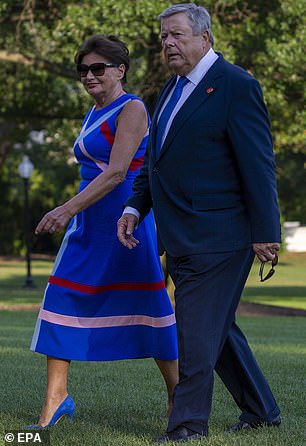 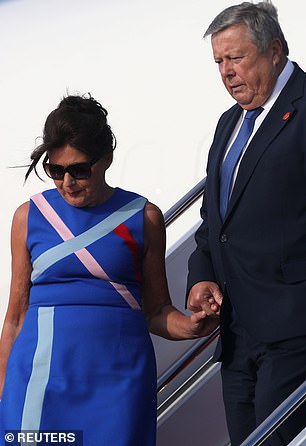 Melania’s parents, Amalija and Viktor Knavs were also spotted getting off Marine One 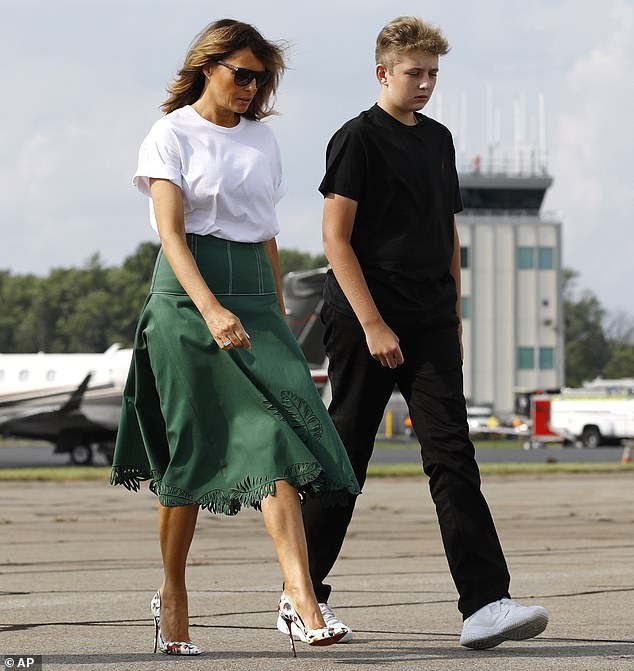 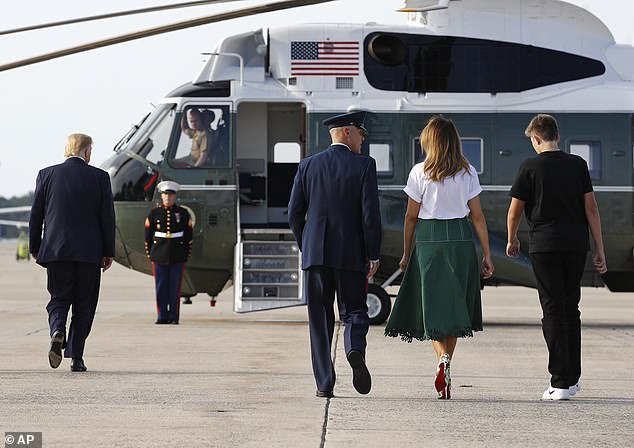 At one point, Trump walked ahead of his wife and their teenage son as they went to board Marine One on Sunday evening

Speaking to reporters after arriving back at the White House on Sunday, Trump said the economy was ‘doing very well’ and dismissed concerns of recession, offering an optimistic outlook after last week’s steep drop in the financial markets.

Larry Kudlow, Trump’s top economic adviser, also played down fears of a looming recession and predicted the economy will perform well in the second half of 2019.

In Sunday television interviews, he said that consumers are seeing higher wages and are able to spend and save more.

‘No, I don’t see a recession,’ Kudlow said. ‘We’re doing pretty darn well in my judgment. Let’s not be afraid of optimism.’

A strong economy is key to Trump’s reelection prospects. Consumer confidence has dropped 6.4 percent since July.

The president has spent most of the week at his golf club in New Jersey with much of his tweeting focused on talking up the economy.