A dating blogger who is a passionate remainer has revealed he refuses to date anyone who supports .

Glen Ocsko, a single father-of-four from Kent, appeared on  where he insisted that those who voted to leave the EU have entirely different ‘values and principles’ to him.

Glen feels he couldn’t develop a longstanding relationship with a partner if they don’t share the same political views, and fears they would ‘have arguments for the next ten years’.

The blogger went on to confess that his own marriage was effected by Brexit and says it was ‘partly’ to blame for the dissolution of the relationship.

However, viewers weren’t impressed by his views with one tweeting that ‘it’s no wonder he’s single’.

‘I’m not looking for a short one time kind of hook up i’m looking for a proper relationship and that’s basically based on values and principles and this is something that’s so fundamental to what I believe in.

‘If someone believes in something totally differently to me, I don’t want to set something up where we’ll have arguments for the next ten years.’

When asked what the principles of a Brexiteer are, he said: ‘For me it’s about closing off our nation, closing off our relationships, corporation, travel, all these things. 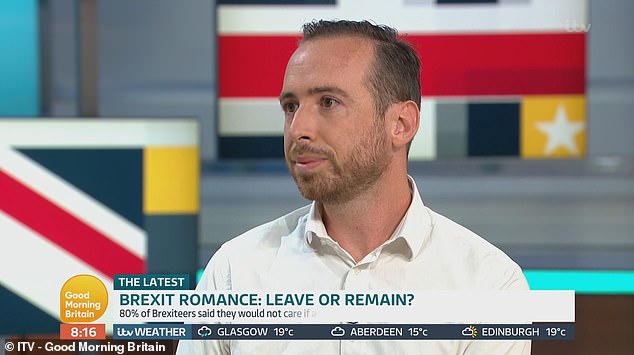 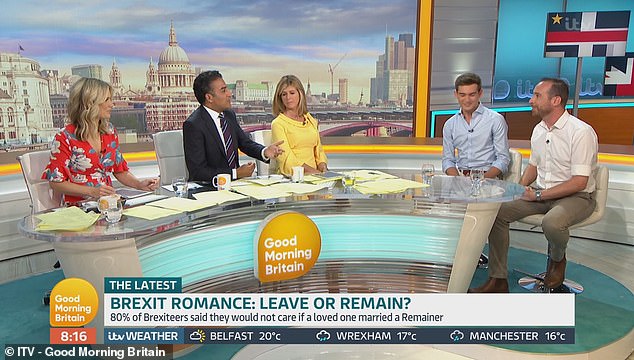 ‘Which actually I believe should be open and free and certainly around Europe as much as possible and Brexiteers generally speaking don’t.’

He added: ‘My own marriage broke down in part because of Brexit’.

Brexiteer Tom Harwood also appeared on the show and argued that Brits should be able to date each other regardless of their political views.

The journalist feels Brexit should be a learning experience which brings the country ‘together’. 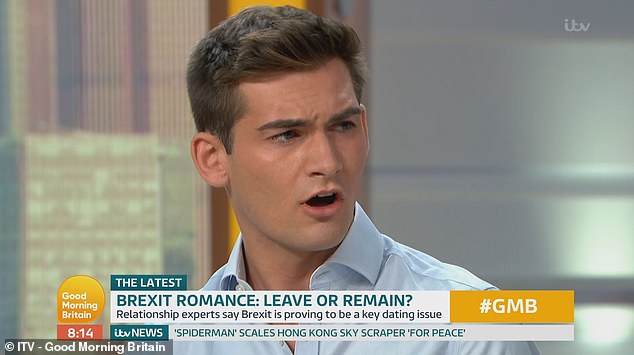 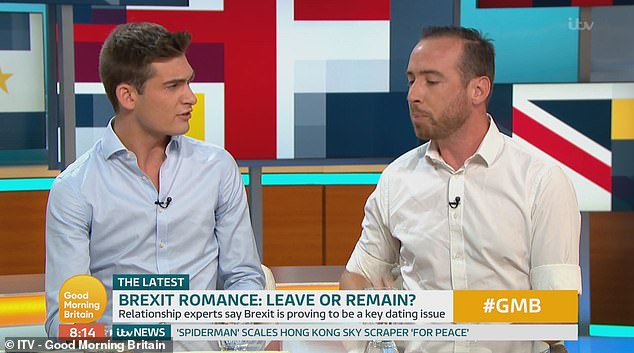 ‘I think it’s so sad if we try to splice and dice our country in to these sort of these groups of people,  who actually we should be learning from and we should be coming together as a country.’

Twitter users were quick to share their views on the matter with one user arguing that anyone who looks for a partner based on their political views ‘needs professional help’.

The user said: ‘Anyone who wouldn’t date someone because of their beliefs on Brexit seriously need professional help #GMB (sic)’.

Another user felt ‘Intolerant, bigoted’ Remainers all deserve to be single.

They posted: ‘Well it tells you everything about Remainers. Intolerant, bigoted and no idea about life. Hope they all stay single.#gmb (sic)’.

A third person argued: ‘#gmb not surprised remainers would only date a remainer. They have an arrogance that makes them believe they’re morally better than people who have different political views.

Another shared: ‘No wonder you’re single, if you choose partners based on their opinion on brexit#GMB (sic)’.