There is an understanding that Cabinet ministers who have been sacked or resigned wait a long time before offering their advice to the Government they have left, and then only do so cautiously, judiciously and modestly.

has driven a coach and horses through this convention by writing an article in yesterday’s Times, before taking to the airwaves, rubbishing the negotiating position of , who has only been installed in No 10 for three weeks.

One of the first things Boris did was to make it clear that he didn’t require Mr Hammond’s services as Chancellor.

It would be surprising if he didn’t bear the Prime Minister a grudge for being deprived of this rich prize, and if bitterness did not give his attack extra force. 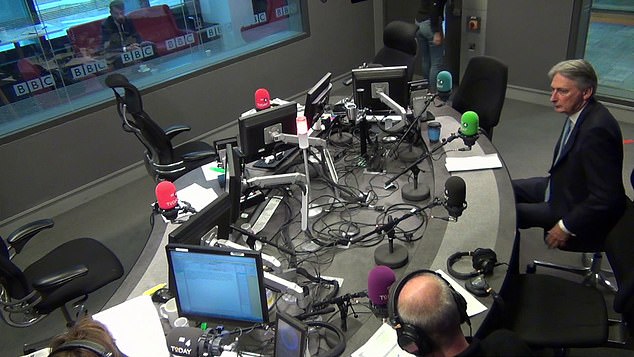 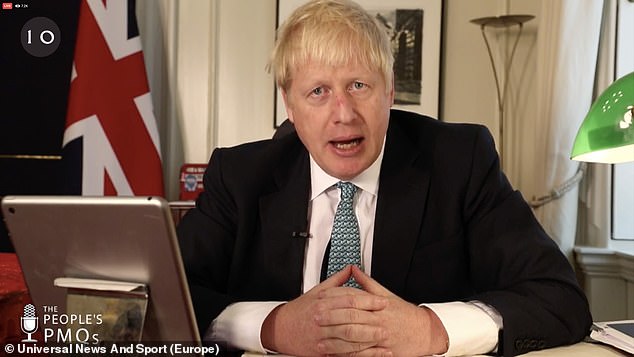 One of the first things Boris did was to make it clear that he didn’t require Mr Hammond’s services. Mr Johnson is pictured answering questions from the public on Facebook Live

However, we should do him the honour of assuming he is sincere about what he regards as the impending catastrophe of No Deal, which he will evidently do everything in his power to prevent.

The trouble is that his intervention is likely gravely to weaken the Government’s stance, and might paradoxically make No Deal more likely. Mr Hammond writes of the ‘betrayal’ of No Deal. But the bitter irony is that it is he who has been guilty of an appalling act of sabotage.

Imagine — a tall order, I know — you were Jean-Claude Juncker, the outgoing President of the European Commission, or Michel Barnier, chief negotiator, or indeed Ursula von der Leyen, who takes over from Mr Juncker on November 1. 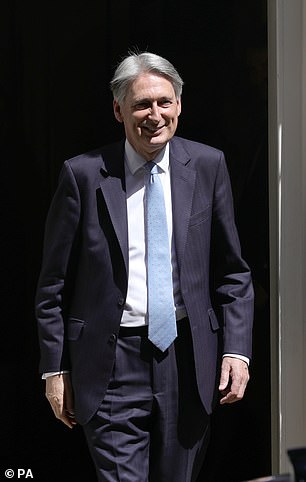 Mr Hammond (pictured leaving 11 Downing Street) writes of the ‘betrayal’ of No Deal. But the bitter irony is that it is he who has been guilty of an appalling act of sabotage

You certainly wouldn’t be in Brussels if you were one of these people. You would be lounging by a pool in an agreeable schloss or chateau, a glass of some alcoholic beverage (maybe a bottle if you were Jean-Claude Juncker) by your side. You would be trying to forget Brexit.

Nonetheless, your minions would be keeping you informed, and you would be texting fellow panjandrums. You couldn’t have failed to be impressed, as well as annoyed, by the British Prime Minister’s oft-repeated declaration that the UK is leaving the EU, come what may, on October 31.

Maybe you would be inclined to take this threat seriously, and maybe you would be wondering whether, if Boris really means what he says, it might not be prudent to offer some concessions to avoid a pan-European shock of No Deal.

How you would welcome Mr Hammond’s words! The former magnifico has helpfully pointed out — helpfully to the EU, that is — that Brussels has no intention of meeting Mr Johnson’s demand that the so-called Northern Irish backstop be removed from the Withdrawal Agreement.

This is what various EU politicians and officials have said countless times in recent weeks, but it is an unexpected boon when someone supposedly on the other side, who until three weeks ago was in charge of the British economy, reiterates the same thing.

That is not the only service the ex-Chancellor has done Brussels. He has provided it with renewed hope that he and like-minded Tories will join with Labour and anti-Brexit parties to keep Britain in the EU after October 31, and very possibly drive Mr Johnson from office. 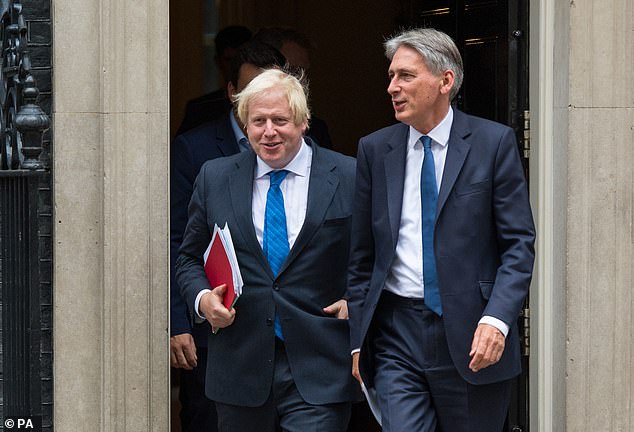 Philip Hammond, right with the Prime Minister, has rubbished the negotiating position of Boris Johnson, who has only been installed in No 10 for three weeks

Why in God’s name should EU officials take Boris’s threats seriously when they have cause to believe Tory rebels are going to ambush him (despite his recently winning the support of more than half of Conservative MPs and two thirds of party members) before somehow disposing of him? 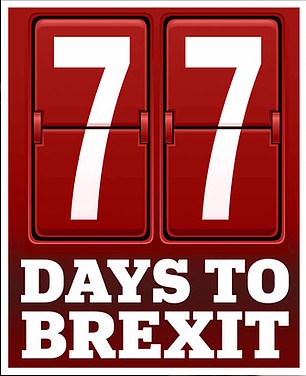 The perennial Tory culprits are familiar — Dominic Grieve, Sir Oliver Letwin, Justine Greening, and so forth. I find such people irritating, but concede they are both principled and consistent.

Philip Hammond is in a different category. He was a leading light in an administration which had the best part of three years to negotiate Brexit — and failed. I’m sorry it did since I believe Theresa May’s very flawed agreement was preferable to the looming possibility of No Deal.

The fact remains that the Commons rejected it three times. It’s dead and buried. Meanwhile, the country is tiring of this endless saga, and many people (including Remainers) welcome Boris’s forthright approach.

In these unhappy circumstances, his threat of leaving on October 31, without a deal if necessary, offers the only prospect of honouring the result of the June 2016 referendum. 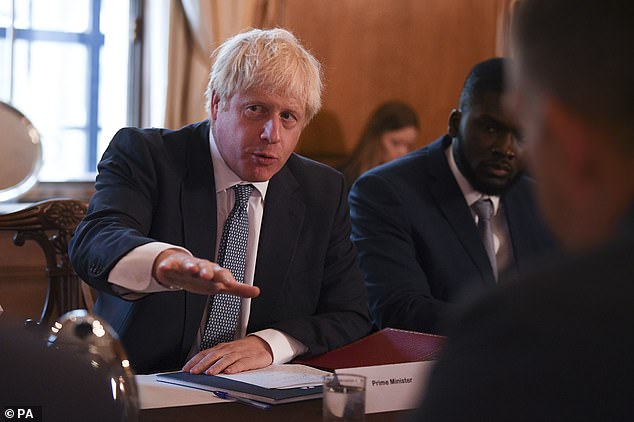 The country is tiring of this endless saga, and many people (including Remainers) welcome Boris’s forthright approach. The Prime Minister is pictured during a roundtable on crime

By the way, Mr Hammond was correct about one thing in his newspaper article. People didn’t vote for No Deal. The reason is that it wasn’t on the agenda. It is now, because the Government failed to get any agreement through the Commons.

The tragedy is that Mr Hammond is repeating the near fatal mistake he made as Chancellor, when he refused for so long to finance No Deal preparations which would have shown EU negotiators that the Government meant business.

If they had believed Britain was prepared to leave the EU without a deal, they might not have insisted on what proved the unacceptable condition of tying the UK into a permanent backstop — potentially unable ever to leave the Customs Union.

How revealing that Michel Barnier should have recently told the BBC that Mrs May never threatened No Deal — despite her oft-repeated mantra that ‘no deal is better than a bad deal’. Mr Hammond didn’t deny Mr Barnier’s contention when it was put to him on yesterday’s Radio Four Today Programme.

After Mrs May, Mr Hammond was more responsible than anyone for weakening the Government’s negotiating position. And now he has the gall to do the same to Boris Johnson, only more aggressively, whipping the rug from under his feet.

Along with other anti-Brexiteers in the outgoing administration, he has dealt Boris a weak hand of cards, and is now attempting to tear up the only decent one that might enable the new PM to carry the day. 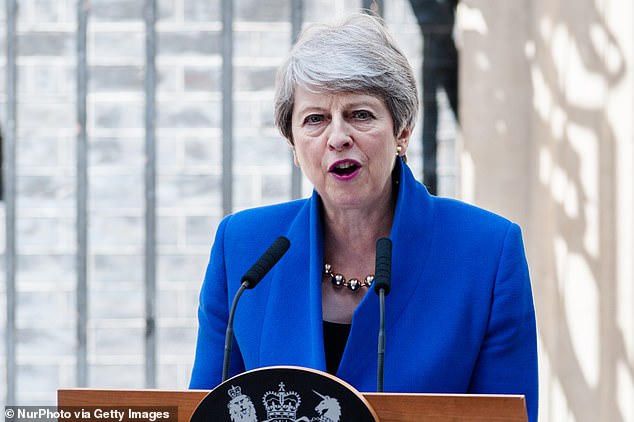 Philip Hammond was a leading light in an administration which had the best part of three years to negotiate Brexit — and failed. Former Prime Minister Theresa May is pictured making her final speech outside 10 Downing Street

Where will it end? It’s perfectly possible his planned insurrection won’t succeed. But its guerrilla activities could be so prolonged that by the time the EU wakes up to the impending reality of No Deal, it will be too late.

Perhaps more likely, he and his fellow conspirators will succeed in bringing down Boris — an outcome he preposterously told the BBC yesterday he does not want.

Yesterday’s letter from Jeremy Corbyn to various malcontents confirms that the Labour leader yearns to dethrone Mr Johnson and install himself in Downing Street. Does Mr Hammond really want to help?

If Boris falls, there are two possibilities. Either there would be a referendum, which would mire us for months in further ghastly uncertainty before producing a result bound to disappoint one half of the country. What then?

Or — more probable, I think — the defenestration of Boris Johnson would lead to an election in which the Tories would be rightly punished by angry voters for not delivering Brexit.

In which case, a Corbyn-led Labour Party, propped up by the Scots Nats, would likely emerge victorious, eager to unleash its crazy economic policies, by the side of which No Deal would resemble a picnic in the park.

Almost no one actively wants No Deal. I’m quite sure Boris doesn’t. But without plausibly threatening it, the Government will get nowhere.

If we end up with Jeremy Corbyn in Number 10 and no Brexit, we’ll know who to blame most — one of the main architects of the mess we’re in, and a rather bitter man.

Tiny city refuses to again down in stoush with Asahi - as Australia battles via drought
Backlogs in U.S. immigration courts are up 38 percent since Trump took office
Man convicted in shooting death of boy, 3, in Kansas City
Role that Armed Forces might play in event of Brexit talks collapsing is being discussed
Iceland locked in 'idiotic' £48m battle with the taxman over savings club and free shoes for staff
Daughter of Joanna Dennehy reveals how her loving mum turned into a man-hating serial killer
ANDREW PIERCE: Corbyn has flunked his history and blamed Thatcher for actions before her time
Police are 'extremely concerned' about a missing girl, 14