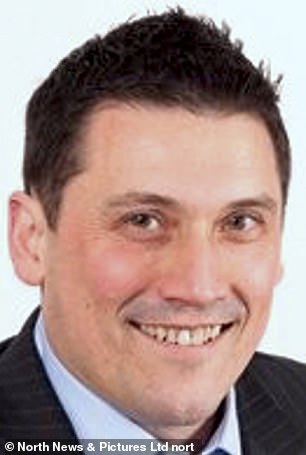 Peter Duncan, 52, pictured, was stabbed to death last night outside a shopping centre in Newcastle. Seven teenagers have been arrested in connection with his murder

A man stabbed to death outside a Greggs bakery with a screwdriver has been named as ‘devoted father’ Peter Duncan.

His family have paid tribute to the 52-year-old, who they say will be in their ‘hearts and thoughts every day’.

They issued a statement which reads: ‘Peter was a kind and caring man who was always first to help others.

‘He was a devoted father, husband, son, brother, uncle and friend and loved by all who knew him. His death will leave such a huge hole in our lives and he’ll be deeply missed by us all.

‘Words can’t quite describe what life will be like without him. He had so much of his life left to live and he’ll be in our hearts and thoughts every day.’

Shortly after the incident, officers arrested seven males, a 14 year-old, two 15-year-olds and four 17-year-olds in connection with the incident, one of which is believed to be the main suspect.

Northumbria Police Area Commander, Chief Superintendent Ged Noble, said: ‘This was a tragic incident and our thoughts go out to Peter’s family and friends at this incredibly difficult time.

‘They continue to be given any support they may need by a team of specialist officers. Peter’s family have requested that their privacy is respected during this difficult time.

‘I appreciate the communities we serve will have concerns and I want to reassure the public and businesses that we are doing all we can to prevent incidents of this tragic nature and ensure people feel safe. 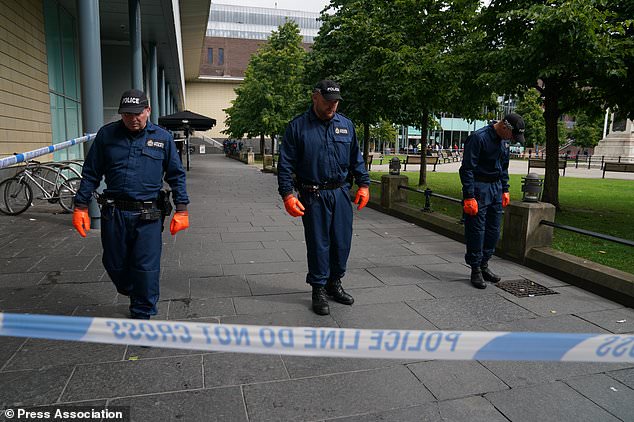 A 52-year-old man has been stabbed to death with a screwdriver near Old Eldon Square in Newcastle. Specialist police search teams, pictured today, are in the area looking for evidence 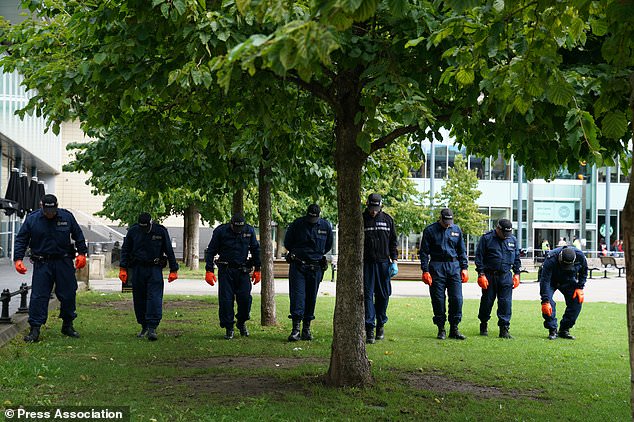 ‘We will be continuing extra patrols in the area and I would urge anyone with concerns to speak to an officer.

‘We are committed to finding out the circumstances behind Peter’s death, and I’d like to thank members of the public who’ve been in touch passing on information that could assist detectives with this investigation.

‘Our enquiries will continue and I would ask anyone who witnessed the incident, who are yet to come forward, to pick up the phone and contact police.’

Anyone with information that may assist the investigation is asked to call police on 101 quoting reference number 281 15/08/19 or Crimestoppers anonymously on 0800 555 111. 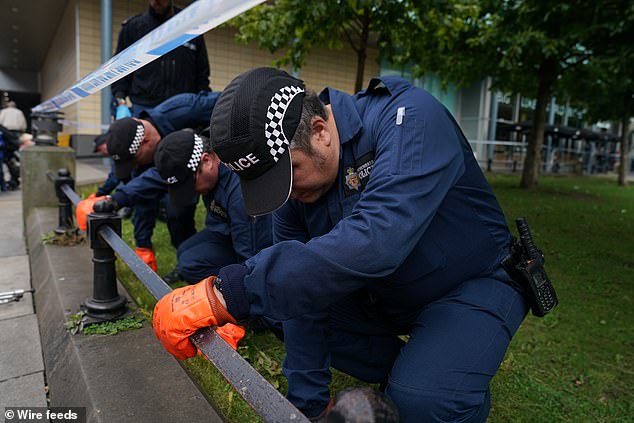 He was taken to the Royal Victoria Hospital, where he died. He had suffered a single stab wound to the chest, which police believe was inflicted with a screwdriver.

Mr Duncan was a lawyer and  had worked as legal counsel for companies within the offshore industry.

He was most recently employed by Royal IHC Limited based on Grey Street in Newcastle, just a short distance away from where he was murdered.

Prior to that he had worked for almost eight years at DeepOcean UK after studying Law at Northumbria University.

Police search teams were scouring a cordoned-off area of Old Eldon Square outside the shopping centre.

The entrance to the mall had been closed off to the public but reopened on Thursday morning.

Chief Superintendent Ged Noble said the area was busy with shoppers and people going home from work at the time of the unprovoked attack.

He declined to say whether the victim had intervened to stop a fight among group of young people.

Old Eldon Square is an area around a war memorial where groups of youngsters regularly gather.

Mr Noble said the incident was not linked to ‘the vagrant community’ and said those arrested were known to police.

He said: ‘This is a tragic and shocking incident where a man has sadly lost his life. 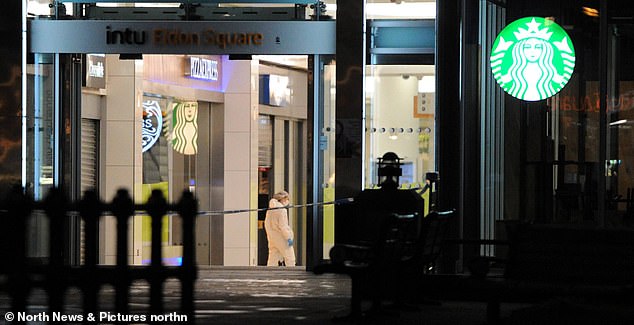 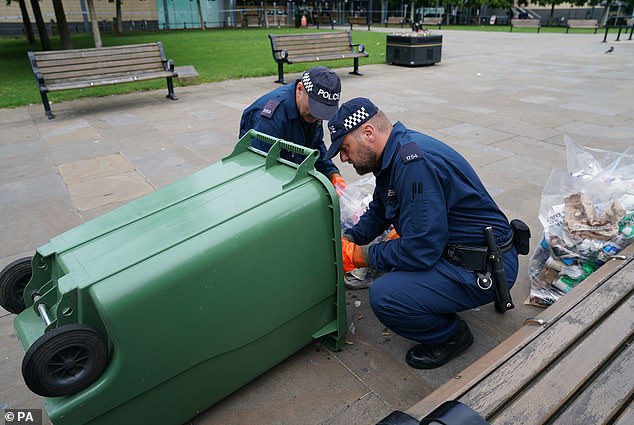 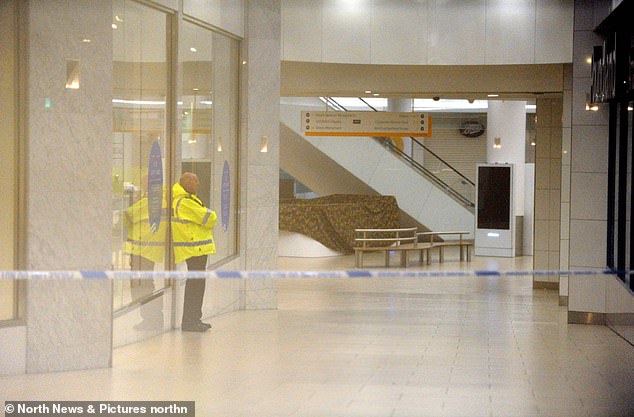 ‘Our thoughts are with the family and friends of the victim and they are being supported by specialist officers at this extremely difficult time.

‘Our investigation is ongoing but we have very quickly arrested seven teenagers in connection with the incident, one of which we believe to be the main suspect.

He said extra patrols will be carried out in the area to reassure the public.

He said: ‘We have had a fantastic response from the public, both in terms of immediate assistance that was given to the victim in support of ourselves and paramedics, and we have had numerous contacts from witnesses describing what they have seen.’

Anyone else with information is asked to call 101. 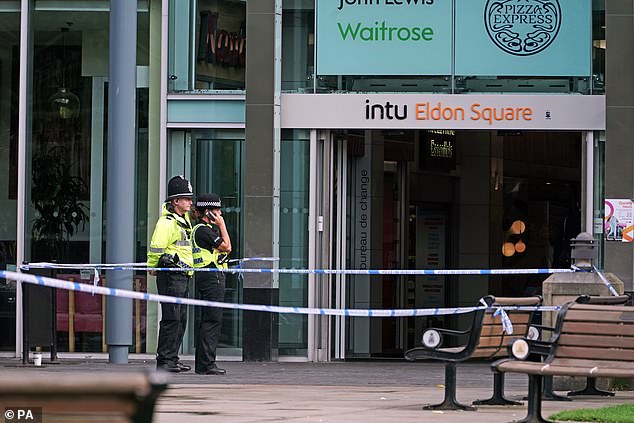 However, Labour’s shadow home secretary Diane Abbott described the extension of Section 60 stop and search powers as a ‘tried and tested recipe for unrest, not violence reduction’.

Under the Government’s plans, an existing pilot project, which allows police to deploy stop-and-search powers in an area without the authorisation of a senior officer, will be extended to cover an additional 8,000 officers in England and Wales.

Mr Johnson acknowledged the move would be controversial but said he believed it would have the backing of the parents of those children most at risk of getting caught up in knife crime.

He said: ‘We are making clear that the police can and should make use of their stop-and-search powers.

‘I know that left-wing criminologists will object. And, of course, it is right that stop-and-search should be done courteously and in accordance with the law.

‘But I also know that the people who back this intervention most fervently are often the parents of the kids who are so tragically foolish as to go out on the streets equipped with a knife, endangering not only the lives of others but their own.’

Ms Abbott responded: ‘This draconian approach shows that Boris Johnson’s government has no real plans to invest in policing or a public health approach to tackling violent crime. They have opted to ‘appear tough’ instead of dealing with the root causes of crime.

‘Evidence based stop and search will always be a vital tool in preventing crime. But random stops have only poisoned police community relations.’

Home Office figures show there have been 43,516 knife crime offences in England and Wales – excluding Greater Manchester – in the year ending in March 2019.

Greater Manchester figures are not included due to a problem with how they record their data.

The figures include knives and other pointed or bladed weapons. The level of knife crime has increased 80 per cent since March 2014.

All but one of the police forces in England and Wales have reported increases in the level of knife crime in their areas since 2011.

Horror as thieves steal 7,000 spiders, scorpions, etc from Philadelphia insectarium
How all these knives and guns were seized by stop and search police in London this week
Dominic Raab is mocked online for leaving books on his windowsill in interview 'to appear well-read'
PLATELL'S PEOPLE: If THIS is what 81 looks like, then count me in!
Anger as normally peaceful Glastonbury books bands who have sung 'Kill Tory Scum'
Tory grandees hatch a plot to crown Boris as Tory leader unopposed to avoid damaging battle
Acquitted! Donald Trump is not guilty on impeachment charges
Police fury as public is told to call if they see 'rule of 6' being broken by groups 'mingling'