Arctic ice is being polluted by microplastic pollution.

According to new research, the tiny particles are transported by the atmosphere and are washed out of the air, especially by snow.

This means the synthetic material is now even present in sparsely populated areas, such as the Alps.

The study, conducted by Germany’s Alfred Wegener Institute, raises fresh questions about how much plastic humans are unintentionally inhaling. 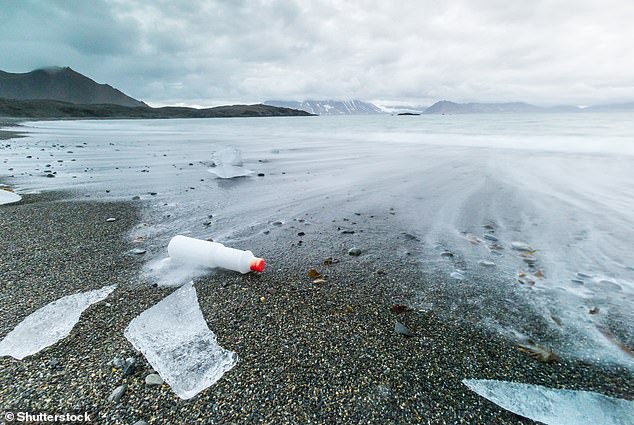 Alarming: Microplastics were found in high concentrations in snow at all of the sites – even in remote areas of the Arctic, on the island of Svalbard, and in snow on drifting ice floes

HOW DANGEROUS ARE MICROPLASTICS?

Humans can be exposed to plastic particles via consumption of seafood and terrestrial food products, drinking water and via the air.

However, the level of human exposure, chronic toxic effect concentrations and underlying mechanisms by which microplastics elicit effects are still not well understood enough in order to make a full assessment of the risks to humans.

However, it’s believed that inhaling these tiny particles may lead to irritation, inflammation and allergic reactions, while previous studies found larger particles in lung cancer patients.

Published in the journal , the data was reached after researchers samples from Helgoland, Bavaria, Bremen, the Swiss Alps and the Arctic.

Microplastics were found in high concentrations in snow at all of the sites – even in remote areas of the Arctic, on the island of Svalbard, and in snow on drifting ice floes.

Rubber most likely from car and lorry tires was one of the biggest sources of microplastics.

The lead researcher Dr Melanie Bergmann stated ‘It’s readily apparent that the majority of the microplastic in the snow comes from the air, similarly to dust from the Sahara can cover distances of 3,500 km or more within days’ She added that this raises questions about how much plastic humans are inhaling.

The findings published in Science Advances showed that nitrile rubber – used in tires – was the dominant type of plastic in all samples, commonly used in countless applications from production of tyres to shoe soles.

Plastic -based paint particles were detected frequently in both ice cores and deep-sea sediment.

Around 98 per cent of these particles were smaller than 100 micrometres in size which raise a huge health concern, the scientists said. 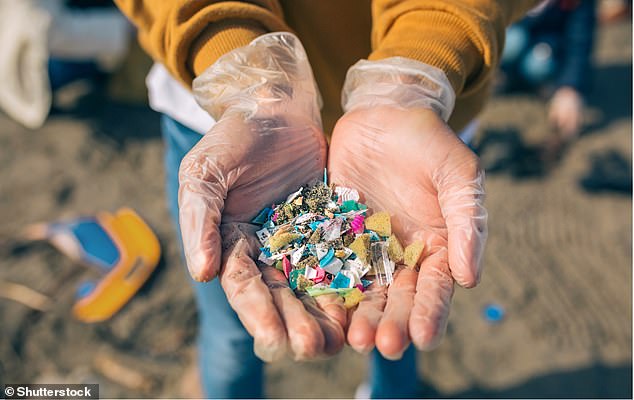 Researchers say the the microplastic concentrations found were considerably higher than those in studies conducted by other researcher in dust deposits, for example.

One of the study authors, Dr Gunnar Gerdts, said this could be due to one of two reasons.

He explained: ‘First of all, snow is extremely efficient when it comes to washing microplastic out of the atmosphere.

‘Secondly, it could be due to the infrared spectroscopy we used, which allowed us to detect even the smallest particles – down to a size of only 11 micrometres.’ The scientists melted the snow and poured it through a filter before examining the trapped residue with an infrared microscope.

Depending on the type of plastic, different wavelengths of the infrared light are absorbed and reflected.

According to the researchers, a major portion of the microplastic in Europe, and even more in the Arctic, comes from the atmosphere and snow.

Dr Bergmann said: ‘This additional transport route could also explain the high amounts of microplastic that we’ve found in the Arctic sea ice and the deep sea in previous studies.’ She added: ‘To date there are virtually no studies investigating the extent to which human beings are subject to microplastic contamination.’ Most research has focused on how animals or human beings absorb microplastic from what they eat.

‘But once we’ve determined that large quantities of microplastic can also be transported by the air, it naturally raises the question as to whether and how much plastic we’re inhaling.’

HOW DO MICROPLASTICS GET INTO THE OCEANS FROM RIVERS?

Urban flooding is causing microplastics to be flushed into our oceans even faster than thought, according to scientists looking at pollution in rivers.

Waterways in Greater Manchester are now so heavily contaminated by microplastics that particles are found in every sample – including even the smallest streams.

This pollution is a major contributor to contamination in the oceans, researchers found as part of the first detailed catchment-wide study anywhere in the world.

This debris – including microbeads and microfibres – are toxic to ecosystems.

It has long been known they enter river systems from multiple sources including industrial effluent, storm water drains and domestic wastewater.

However, although around 90 per cent of microplastic contamination in the oceans is thought to originate from land, not much is known about their movements.

Most rivers examined had around 517,000 plastic particles per square metre, according to researchers from the University of Manchester who carried out the detailed study.

Following a period of major flooding, the researchers re-sampled at all of the sites.

They found levels of contamination had fallen at the majority of them, and the flooding had removed about 70 per cent of the microplastics stored on the river beds.

This demonstrates that flood events can transfer large quantities of microplastics from urban river to the oceans.

Currie Cup champions overcome rain, wind and Cheetahs
Shocking moment police drag couple to the floor and arrest them at a Tesco checkout
Idaho wildlife official criticized for posing on social media dead animals
Would YOU give your partner a 'hall pass'?
Mother-of-three, 38, identified as one of two women found inside freezer in east London flat
UK weather: Heatwave forces rail firm to warn workers not to travel
India flood death toll hits 147 after heavy rain and landslides left hundreds of thousands homeless
Stunning images of Britain's dramatic new 'Sky Pool' 35m above London next door to the US Embassy