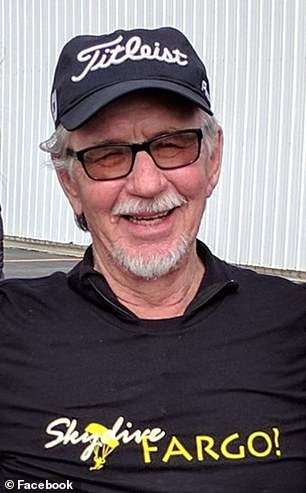 Gerald F. Fischer, 81, was an experienced skydiver with 2,500 jumps under his belt but he suffered a ‘hard opening’ during a jump on Saturday leaving him unable to control his descent

An elderly man who was a former army parachutist has been killed in a skydiving accident after his chute failed to open properly as he took part in a jump in northwest Montana on Saturday.

Gerald F. Fischer, 81, of Moorehead, Minnesota died because of a problem with his parachute which suffered a ‘hard opening’ which can often cause severe injuries as the jumper decelerates too quickly.

Emergency crews arrived at the Skydive Lost Prairie at around 12:45pm after reports a man had been involved in a skydiving accident but there was nothing that could be done to save him.

They say he experienced a ‘hard opening’ of his parachute after he jumping out of the plane.

A ‘hard opening’ is when the parachute abruptly jolts open instead of gradually opening to decelerate the jumper, according to skydiving safety websites.

Hard openings are known to cause severe injuries and even death.

The malfunction instantly spreads the canopy, creating a lot of resistance and force on the jumper and it is believed this is what happened to Fischer. 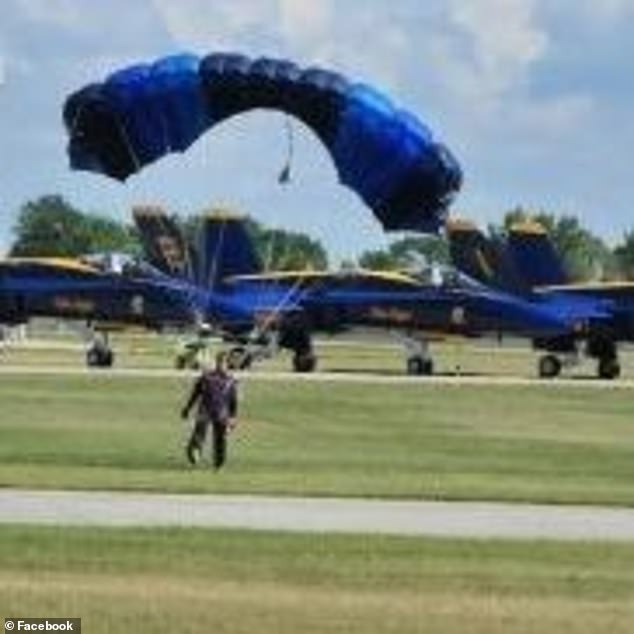 Witnesses said ‘the seasoned skydiver’ experienced a ‘hard opening’ when deploying his chute rendering him unable to control his descent. He is pictured here during a previous jump

‘It was a tragic accident,’ said Jim Krogh, 69, of West Fargo to the

‘Skydiving is a dangerous sport that can generally be conducted safely,’ Krogh said. ‘Accidents are very rare and getting rarer.’

Krogh says he doesn’t believe Fischer’s age or health was a factor in the tragedy.

‘Gerry was in pretty good shape,’ he said. ‘It was a normal skydive with a bad ending,’ he said.

Fischer had also set world records, the most recent being in 2018 for the largest group of jumpers over the age of 70. 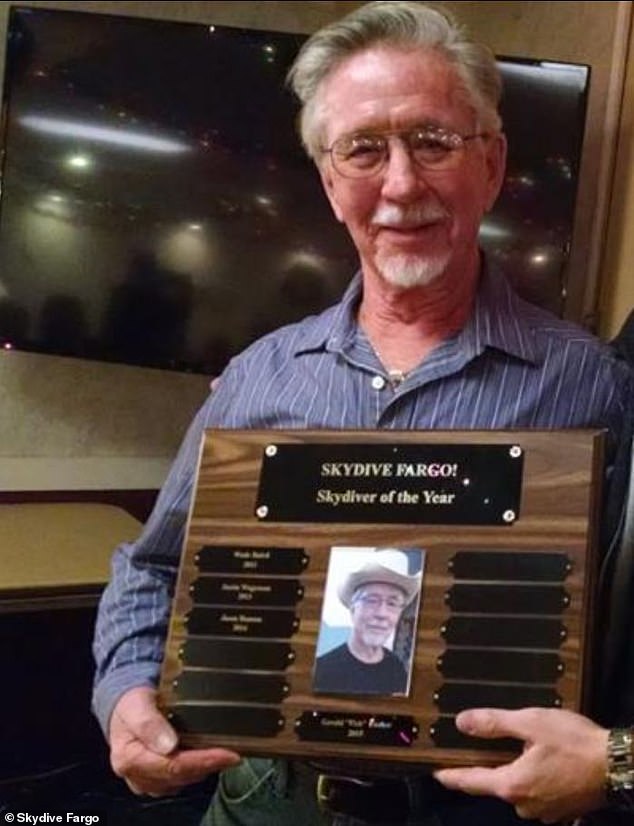 In 2015, Fischer was named Skydiver of the year at his local skydiving club in Fargo, Minnesota

Fischer was seen to be at about 4,000 feet and witnesses said he continued to turn counter-clockwise until he landed in a pasture. He was pronounced dead at the scene.

He began jumping in the military as a member of the 101st Airborne Division.

Fischer then took up parachuting as a sport in the 1990s and later fell in love with skydiving.

In 2015, Fischer was named Skydiver of the year at his local skydiving club in Fargo, Minnesota.

At the time of his death, he had around 2,550 jumps under his belt.

The venue has been accident-free for several years but the Lost Prairie jump site has had a number of deaths over the past 12 years.

A 27-year old Washington man died when his chute failed to open during a jump in 2011.

A Colorado man died the year before that when his chute became tangled with another jumper.

Five people died when a plane crashed on takeoff at Lost Prairie in 2007.

The United States Parachute Association reported 13 skydiving fatalities in 2018 out of roughly 3.3 million jumps – the lowest number of fatalities in the sport’s history, according to the association.

Johnny Depp 'accuses ex-wife Amber Heard of defecating of their marital mattress'
The Queen feeds her horses ahead of a shooting trip in Balmoral
Celebrity astronomer Neil deGrasse Tyson hits back against sexual misconduct allegations
Ivanka and Jared stand to profit from massive tax break she and Trump are pushing
Boxing champion Rocky Lockridge dies at 60 after publicly battling drug and alcohol problems
Hillary Clinton says she 'can't imagine' running for president again
Police divers to pond in park where missing Connecticut mother's car was found
ALEXANDRA SHULMAN: A hacker stole my ID... but all Google care about is his rights