The parents of a child saved by the coastguard after floating out to sea on her lilo sparked fury today after sending the RNLI a bill for £7 because her rescuers burst the inflatable.

A diver jumped into the water off Porthleven, Cornwall to save the child but popped her blow-mattress to stop it being sucked up into the helicopter’s rotors.

Today Mike Carter, president of the local RNLI branch, revealed a fortnight later her parents sent them an invoice for the £7 lilo that put their own child’s life in peril.

He revealed that his commanding officer wrote back to the parents, who haven’t been named, saying he would pay them £7 if they cover the costs of the £7,000 helicopter rescue.

The couple, who have been blasted as ‘disgraceful’ on social media, have not responded to the latest letter. 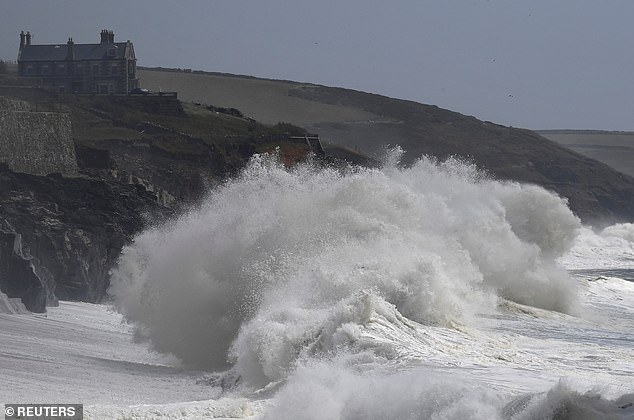 Crew jumped into the water off Porthleven, Cornwall (pictured on Saturday) to save the child but popped her lilo – now her parent want £7 back

He said: ‘A family visiting Porthleven purchased a lilo from a local shop and went to the beach.

‘There was an off-shore wind and the parents immediately experienced their child waving goodbye as the lilo went further and further out.

‘The coastguard scrambled the SAR helicopter which was soon on scene.

‘The diver jumped from the the helicopter and saved the child. He instantly put a knife through the lilo to save any further drifting and they were both winched to safety.’

Mike said that after receiving the invoice, the rescuer replied saying they would happily pay – if the family paid for the cost of launching the helicopter.

He added: ‘Two weeks later the commanding officer received a request to pay an invoice for £7 the cost of the lilo.

‘The CO wrote replying, “We will be happy to pay your invoice on receipt of payment for the helicopter rescue £7,000”. No response was received.’

Mr Carter said that inflatables in the sea pose a constant threat, and only last week the Maritime and Coastguard Agency posted a similar warning.

They said: ‘Inflatable unicorns, watermelons, dinosaurs, you name it, we’ve seen it.

‘Keep your floating friends for the pool. They may pose well for Insta, but they can also pose a danger when up against strong currents and wind, sweeping you out to sea.

‘Remember, supervise kids and call 999 Coastguard if you spot an inflatable drifting at sea or yours gets blown away.’

Non-medicinal options advised to soothe teething babies
News at Ten to be cut by five minutes to make room for BBC Three
Ten dead and 17 wounded in Brazilian school bloodbath after two men begin shooting at children
MPs are boosting their expenses payments by up to £9,000-a-year by claiming for dependent children
The Cars' lead singer Ric Ocasek dies at 70 from 'natural causes' in his Manhattan townhouse
Jane Fonda is arrested for the FOURTH time
Neil Ferguson's lockdown lover Antonia Staats is seen out in public
Back to Benidorm in JULY! Spanish PM tells tourists 'we're waiting for you'