British daytime TV stars have come together to share their honest battles with the menopause, in an eye-opening interview.

Meg Mathews, 53, Trisha Goddard, 61, Kay Burley, 58, Andrea McLean, 49, Liz Earle, 56, Sharron Davies, 56, spoke to Hello! magazine to reveal their experiences, as they aim to break the taboo around the topic.

Andrea bravely admitted that she is still struggling with anxiety which was one of the side effects, while Kay  battles ‘awful hot sweats’ and Liz had to contend with headaches and broken sleep.

However all the women have made the most of it, with Trisha admitting she now has ‘the best sex she ever had’, and Kay talking about how she goes clubbing until the early hours of the morning, adding ‘B****** to mother nature’.

The women came together to discuss the menopause, following the news that new pioneering surgery has been rolled out, in which ovarian tissue is removed and replaced at a later date, potentially delaying the menopause for 20 years. 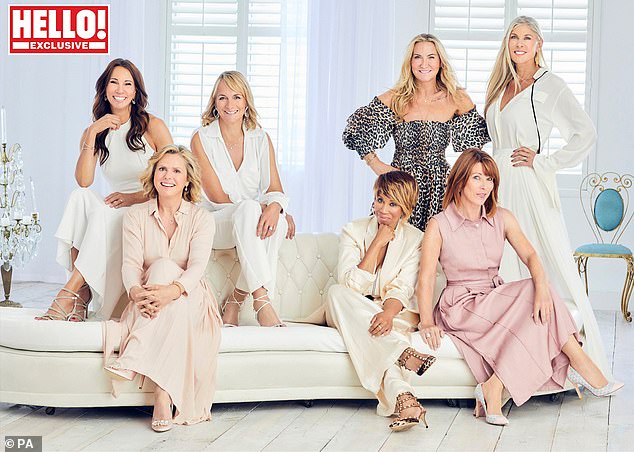 Andrea McLean, 49, Liz Earle, 56, Louise Minchin, 50, Trisha Goddard, 61, Meg Mathews, 53, Kay Burley, 58, and Sharron Davies, 56, (seen left to right) spoke to Hello! magazine to reveal their experiences around the menopause, as they aim to break the taboo around the topic

The Loose Women presenter explained that she went through a surgical menopause aged 46, after having a full hysterectomy due to endometriosis at 46, describing it like ‘falling off a cliff’.

She said: ‘The absolute worst was the anxiety, which is still something I struggle with. Shortly after my operation I was diagnosed with vasculitis, which is potentially fatal if its not found in time, which changed my mindset as you think: ‘Why are people moaning about getting older’.

The activist and ex-wife to Noel Gallagher, who went through the menopause at 48, said: ‘I was part of the rave scene in the ’80s, so when I started having symptoms I thought “Oh my god I’ve shattered my nervous system’. When someone suggested it may be the menopause I said: ‘Are you mad? I’m not an old lady!’.’

Speaking about her favourite age, she admitted she loved being 25 and ‘travelling everywhere’, but admits she now feels like she ‘knows where she belongs in life’. 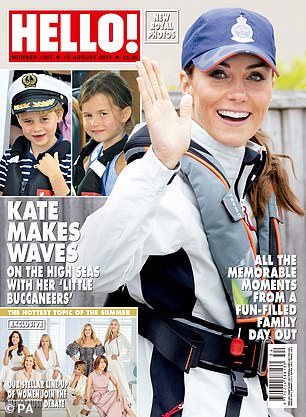 The full interview is in Hello! magazine, out now

The former Olympic swimmer admitted she has been lucky enough not to suffer many symptoms.

She revealed that three men contacted her on Twitter when they found out she was doing an interview on the menopause, asking for tips and believes men should be involved.

Speaking about her favourite age, she added: ‘If someone were to say to me pick an age and you can stay there forever I would choose my mid thirties. Physically you’re in one of the best places you’ll ever be and you have lots of choices’.

Beauty brand founder Liz Earle has had five children but reveals how no one warned her of the signs and she only realised she was going through the menopause when she was doing research on it.

‘Looking back I had bad headaches and disturbed sleep, but it was only when I was writing about it that the penny dropped,’ she said.

Sky News broadcaster Kay Burley says she has a facial every fortnight, ultrasound therapy every year and the potential for a facelift every 10 years – even though she doesn’t like the thought of going under the knife.

Kay deals with the menopause – and her ‘really bad hot sweats’- by exercising, and revealed that she goes clubbing to a gay club in Soho where you are ‘encouraged to dance on the tables’, before she walks across Waterloo bridge with her friends and has lunch at the Shard.

‘I’ve always felt like I was 17. My mother was dead at my age so I’m just going to live life. I have taught myself to be confident. And I’m not having mother nature mugging me off. B******* to that’.

Chat show host Trisha Goddard went through the menopause at 50 as a result of chemotherapy treatment she had for breast cancer.

She is baffled by the attitude in the West towards older women, explaining how in the West Indies older women are considered an asset, and are seen as ‘wise leaders’  – not spoken about as ‘invisible and weak’ like they are in the UK.

‘I’m having the best sex I ever had. I’ve always dated and married younger men – what a mistake that was. But my partner now is the oldest man I’ve dated’, she revealed.

The TV personality, who refers to her anonymous boyfriend as ‘#Bae and #Boo’, was briefly married to Robert Nestdale and Mark Greive, with whom she sheares two children, before tying the knot with her third husband Peter Gianfrancesco in 1998. Trisha and psychotherapist Peter divorced in 2018.

The full interview is in Hello! magazine, out now.

What is the menopause and when does it happen?

The menopause occurs when a woman stops having periods and can no longer fall pregnant naturally.

It is a natural part of ageing, which occurs in women between 45 and 55 years old.

However 1 in 100 women can experience menopause before the age of 40, which is known as premature menopause or premature ovarian insufficiency.

According to NHS advice, symptoms can begin months or even years before your periods stop and last around four years after your last period.

Premature or early menopause can occur at any age, and in many cases, there’s no clear cause.

A look back at some of the best kitchens ever seen on The Block
Nick Cummins returns to social media with a video mocking A Current Affair
High levels of cocaine found in the Thames are making eels hyperactive
Revoke Article 50 petition calling on the Government to cancel Brexit hits six million signatures
Crashes have left 209 airline passengers dead in 2019, but air travel is still safer than ever
ISIS is bigger threat than Taliban in Afghanistan and using attacks as 'practice' for Western ones
Prince Andrew wishes Princess Beatrice a 'happy birthday' as she turns 31
Downton Abbey's Michelle Dockery finds love with Fleabag star Phoebe Waller-Bridge's brother