NBA star Ben Simmons was at the centre of a fracas of Melbourne’s Crown Casino after he accused them of racial profiling earlier this month.

And on Saturday, The Philadelphia 76ers player – who is Australia’s highest paid athlete – looked casual cool as he jetted into Sydney.

The 23-year-old defiantly wore a pair of camouflage pants, which were famously cited as one of the possible reasons why he was turned away from the casino. 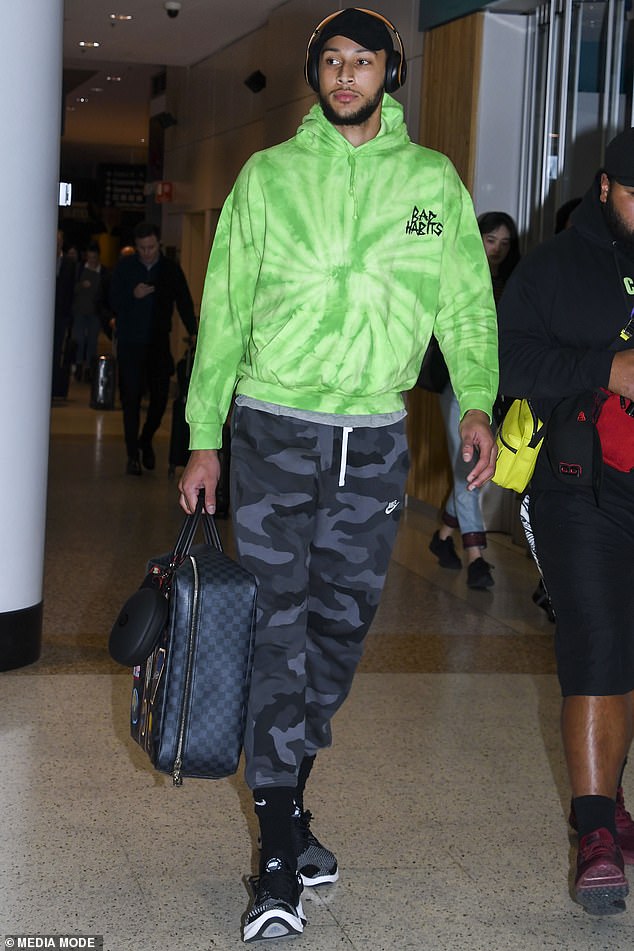 Defiant: NBA player Ben Simmons, 23, (pictured) was back in camo pants while jetting into Sydney Airport on Saturday, after he accused Melbourne’s Crown Casino of racial profiling

The Melbourne-born player looked relaxed as he strolled through arrivals terminal, at one point posing for a photograph with a young fan.

The strapping athlete wore a black cap and wore a pair of Beats By Dre headphones during the trip. 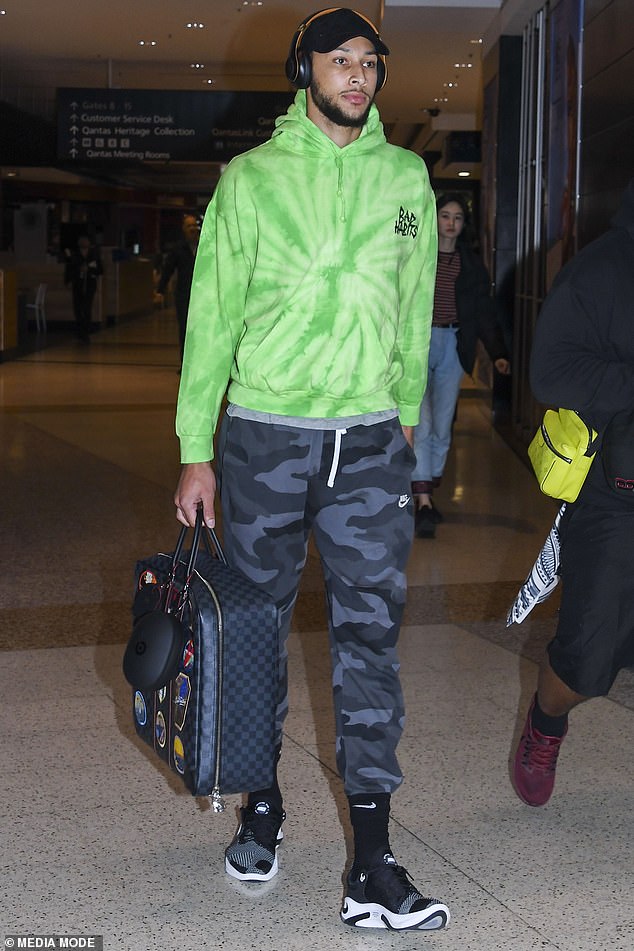 Ben carried his belongings in a Louis Vuitton Damier suitcase, which he held by the top handles through the airport.

The sporting star made headlines earlier this month after he claimed he was turned away from Crown in Melbourne because he is black – which the casino denied.

During the fracas, commentators suggested that he may have beached Crown’s dress code by wearing camo pants. Others claimed he wasn’t carrying ID. 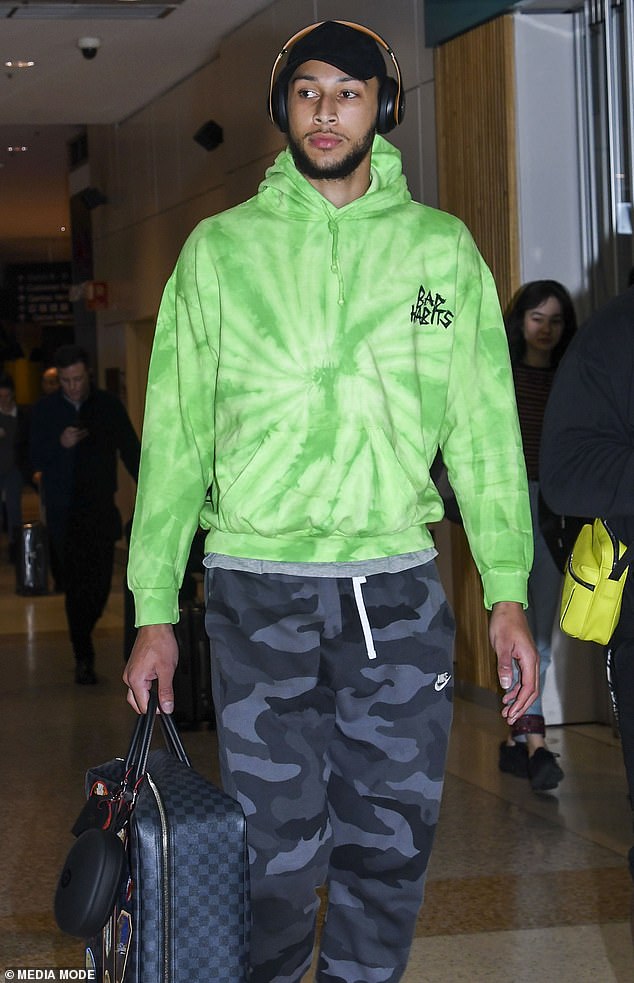 Casual cool: Ben wore a cap and listened to music on his Beats headphones for the trip

Simmons, however, hit back and said a friend of his was also wearing camo pants but was let in, and added he did show ID.

The mystery took another twist on Tuesday, when Crown issued a statement saying the group was allowed in – calling into question Simmons’ version of events.

A spokeswoman for Crown Casinos told Daily Mail Australia late on Tuesday the group were allowed in, and denies the allegations made by Simmons.

‘Crown strenuously rejects reports that it discriminated against a group of visitors last night,’ she said.

Expensive taste: Ben (pictured) carried his belongings in a Louis Vuitton Damier suitcase, which he held by the top handles while strolling through the airport

‘Crown’s internal security policy requires our security officers to check identification of those persons they believe to be under the age of 25, this is an enhanced safeguard to ensure that no one under the age of 18 is permitted entry to the Casino Floor as required by law.

‘The group subsequently provided identification and were permitted entry.’

The alleged scandal came to light when the Philadelphia 76ers star on Monday posted a since deleted video to Instagram, shot in the foyer of the  casino. 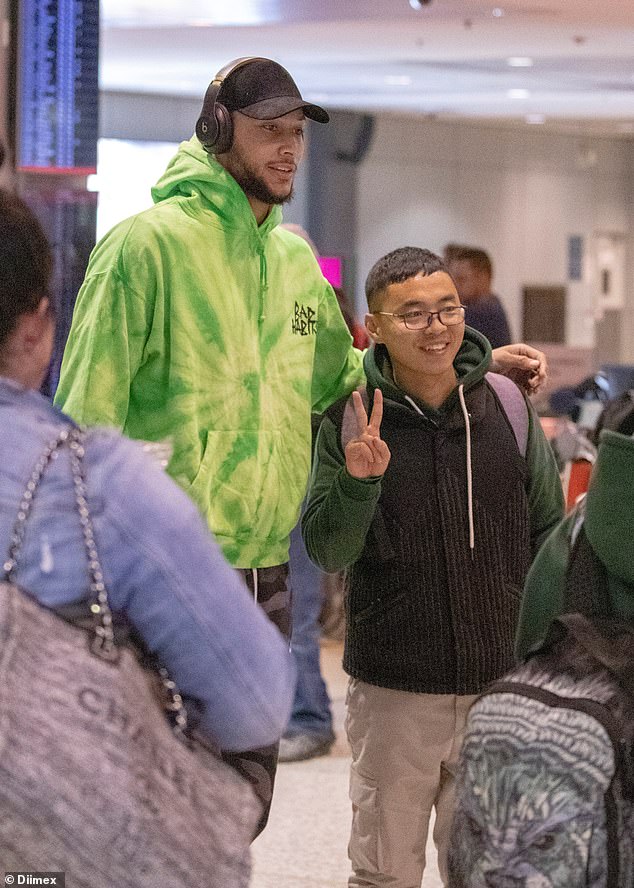 Support: The NBA star took time to pose with a young fan at the airport

Simmons, who recently signed a $242million  contract extension, claimed his white friend, Alex Subers, wasn’t checked at the entrance – but the remainder of the group were.

‘I find it so crazy that the only guy who doesn’t get checked to go into the casino is this guy,’ Simmons said in the video, pointing to his friend.

Hitting out: Entertainment reporter Peter Ford has hit out at Ben Simmons, who claimed he was denied entry to Crown Casino on Monday because of the colour of his skin, claiming he had violated the dress code with his pants 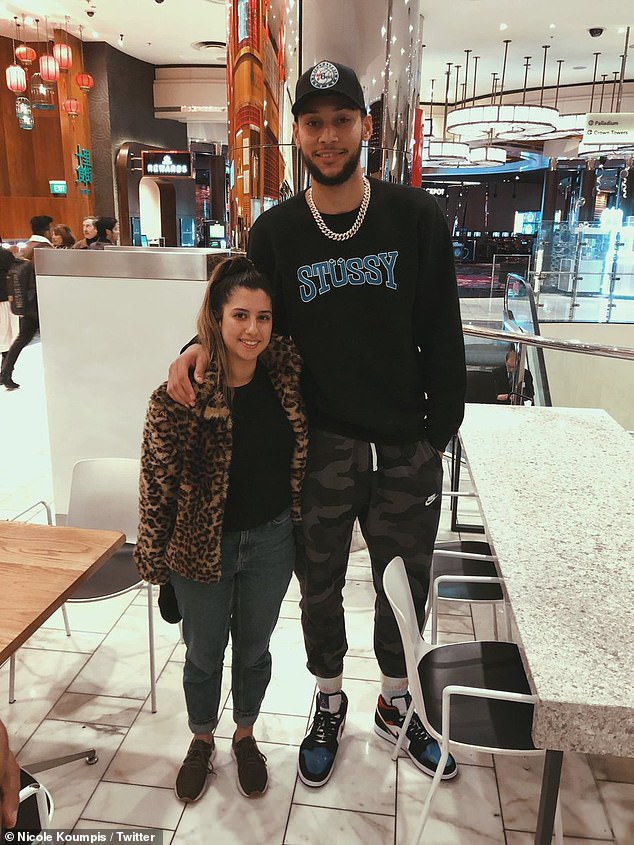 The famous cargo pants: Simmons was seen earlier outside the casino with a fan, wearing camouflage trackpants

Simmons then pans the camera around to show his entourage agreeing with his allegations, before zooming in on two security guards standing behind.

‘Thank you Crown Casino, damn, and they didn’t let me in, or him or this guy,’ Simmons continued. 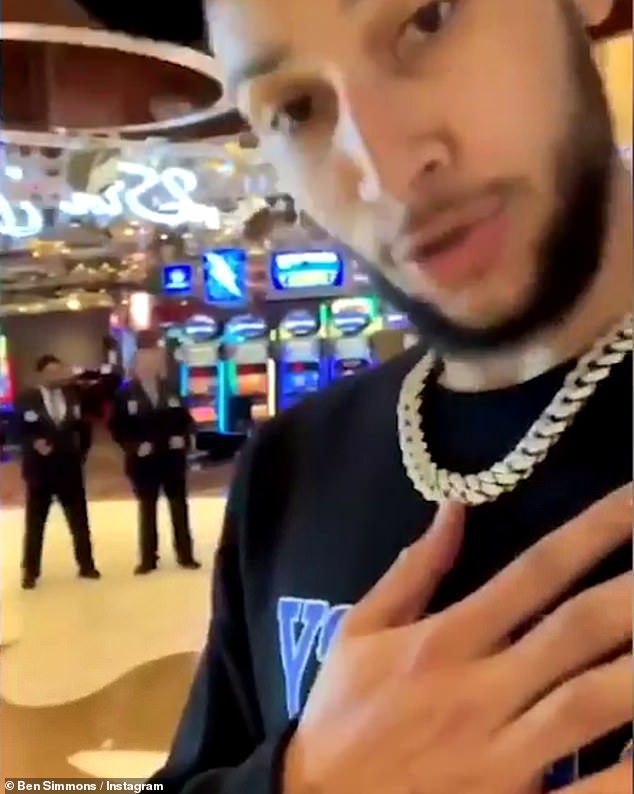 Same? Simmons said while he was in violation of the dress code, his white friend who was also wearing camouflage pants was allowed to enter the casino 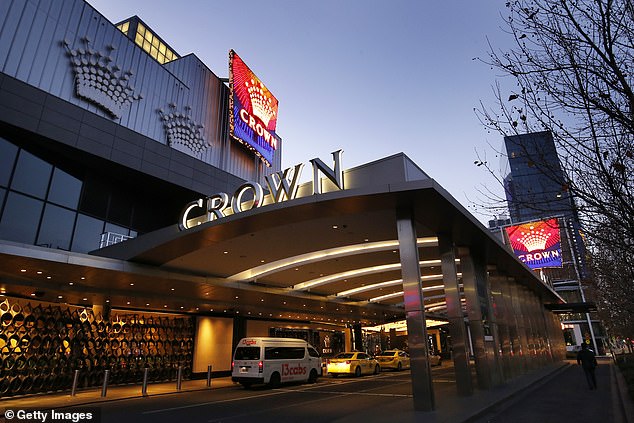