Jennifer Lopez looked nothing short of sensational as she was photographed by her 11-year-old daughter Emme Maribel Muniz in a new snap.

The singer, 50, displayed her athletic physique as she posed in a dark red bathing suit with a deep V-neckline.

Styling her locks into an updo, Jennifer also sported a pair of shades and said she was ‘soaking in every moment’ as she continued her It’s My Party concert tour. 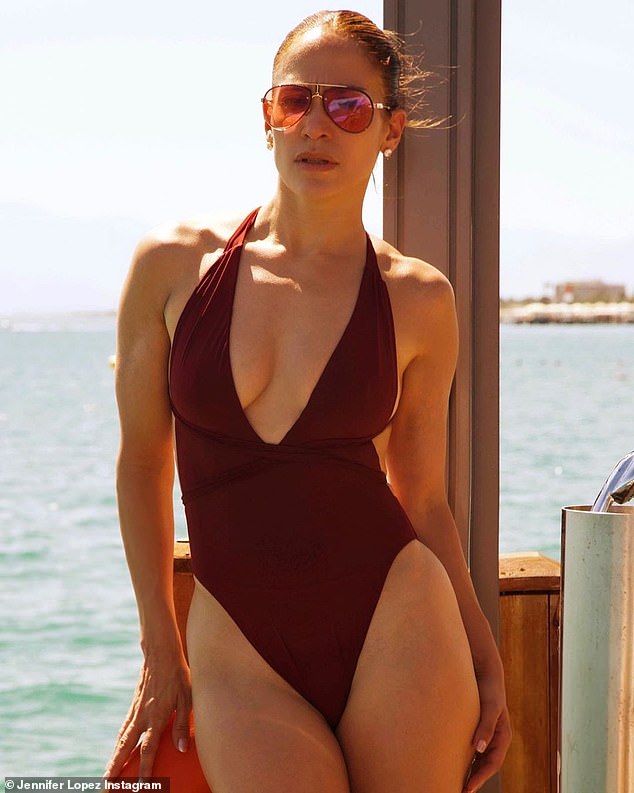 Beauty: Jennifer Lopez looked nothing short of sensational as she was photographed by her 11-year-old daughter Emme Maribel Muniz in a new snap

Emme has previously taken to the stage with her famous mother and showed off her budding photography skills with the snap.

Jennifer has been working out harder than usual ever since she started romancing former pro athlete Alex Rodriguez of the New York Yankees.

The Jenny From The Block singer captioned the shot, ‘3 more shows to go… soaking in every moment…☀️☀️☀️ #itsmypartytour #asummeriwillneverforget See you tonight Malaga!!!’

Her fiancé Alex shared another shot of her in the same suit to Snapchat on Wednesday. 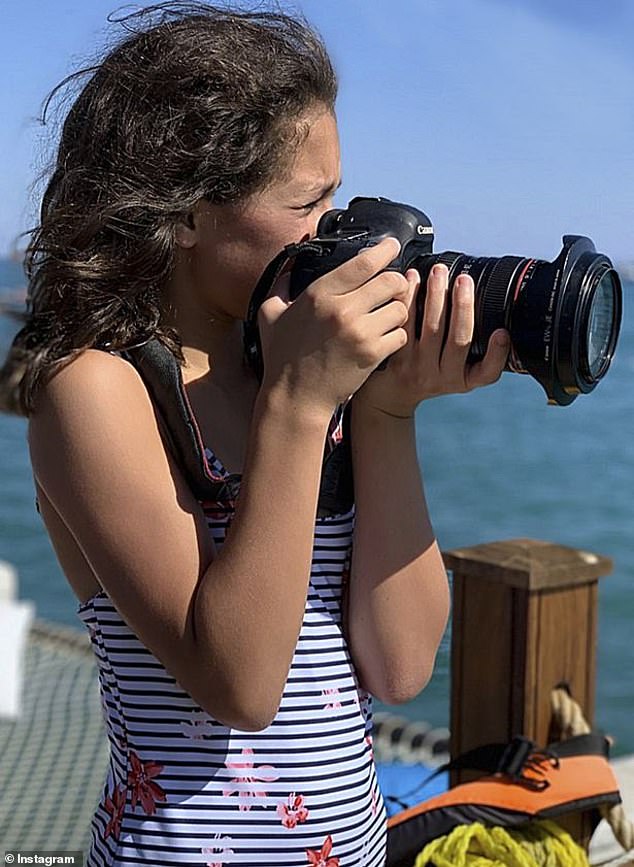 Talented: Emme has previously taken to the stage with her famous mother and showed off her budding photography skills with the snap

Jennifer recently performed in Turkey and before that she was in Moscow where she put on a dazzling concert then hit the airport with her kids.

The singer had no time to change and was seen covering up one of her stage outfits in a bejewelled dressing gown as she picked up her twins Max and Emme from their hotel in .

Jennifer looked radiant after another triumphant turn on the stage, revealing a glimpse of her hourglass curves in the skintight one-piece.

Proving that accessories truly can make an outfit, the mother-of-two toted a bedazzled drinking water bottle which bore her initials.

Meanwhile, the twins looked ready to catch up on sleep on the journey as they headed out clutching pillows whilst clad in matching red tracksuits. 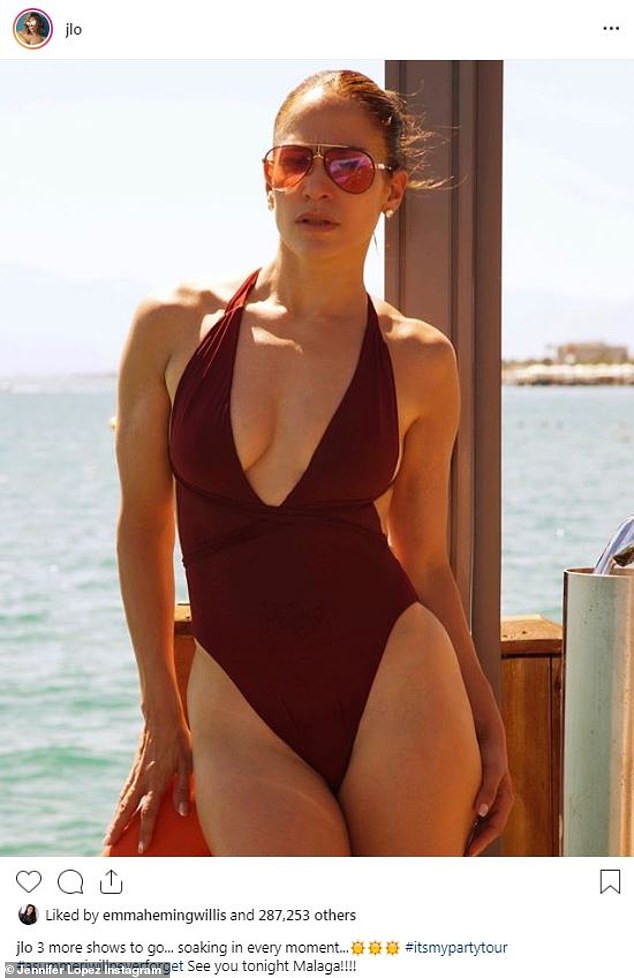 Knockout: Jennifer displayed her athletic physique as she posed in a dark red bathing suit with a deep v-neckline 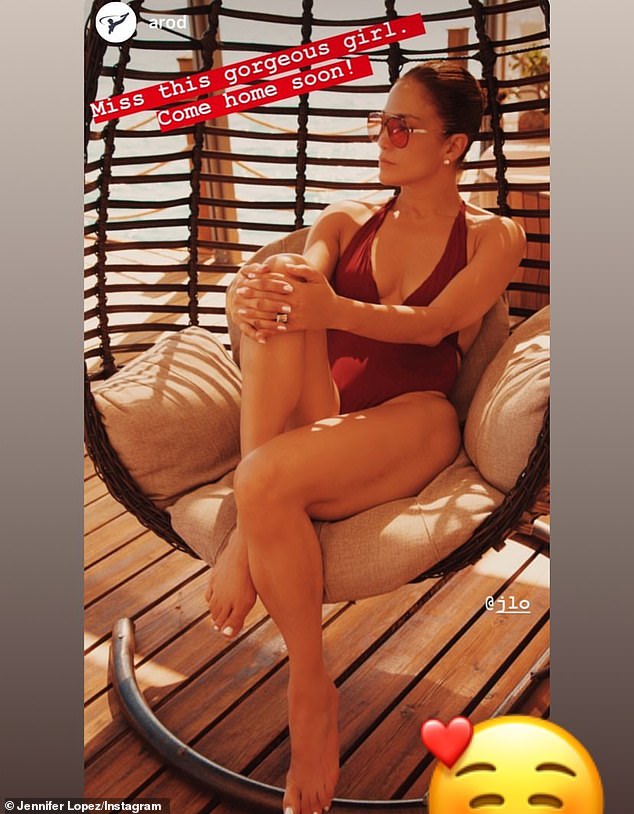 He shared a similar shot: On Wednesday her fiance Alex said that he missed her and wanted her to come home from her tour 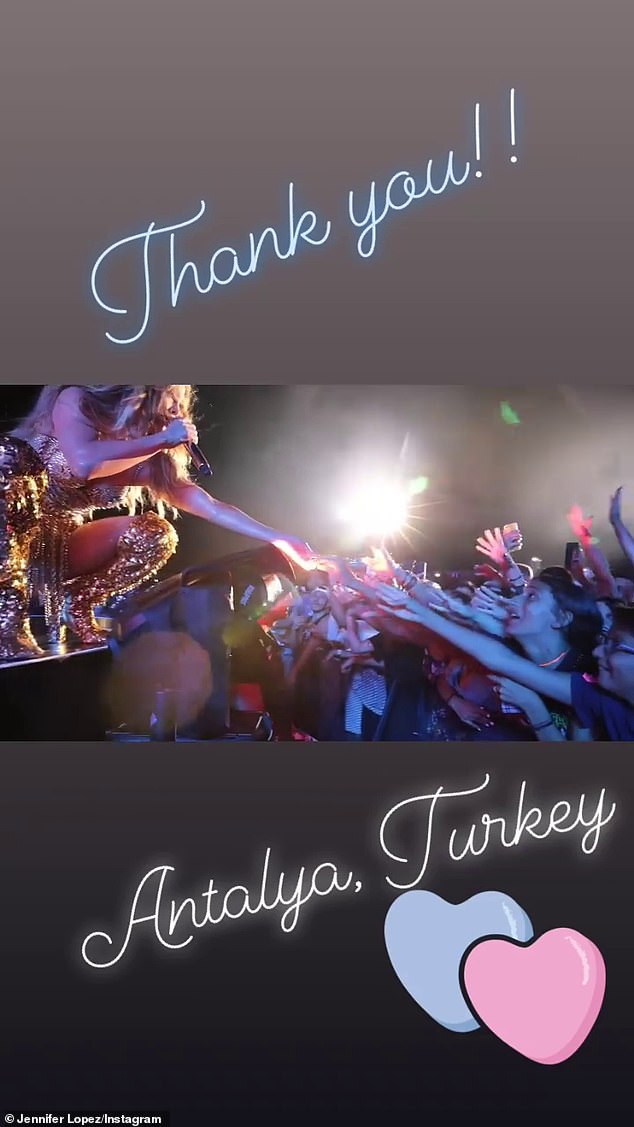 She loved it: The siren was seen here in Antalya, Turkey as she reached out to her fans

The duo are no doubt enjoying spending the summer travelling the world with their mother, who began her It’s My Party tour in June, and will conclude in August.

The North American leg of the tour kicked off in June on June in Inglewood, California and ended her stateside stint in Miami, Florida, the following month after 32 shows.

Although the tour was originally designed to be in North American, the songstress later added dates across Europe, including a controversial performance in Israel. 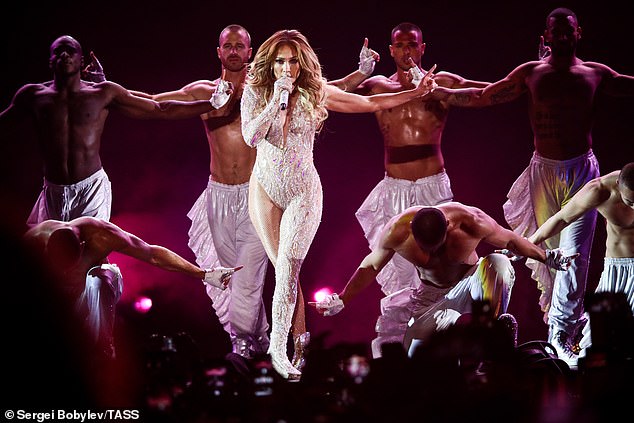 So far away: And in this shot the star is on stage with her back-up dancers in Moscow on August 4

Ahead of her Tel Aviv show, the songstress was accused of choosing sides in the long standing Middle East conflict and of ignoring Palestine, which drew condemnation from some pro-Palestinian activist groups.

In response to the controversy, Jennifer’s manager Benny Medina said: ‘There was nothing that was gonna stop us from being in Israel.

Despite the drama, Jennifer took to the stage in Tel Aviv last week, and will continue her international tour in Turkey, Spain and Egypt, before rounding her string of performances off in Saint Petersburg, Russia on August 11. 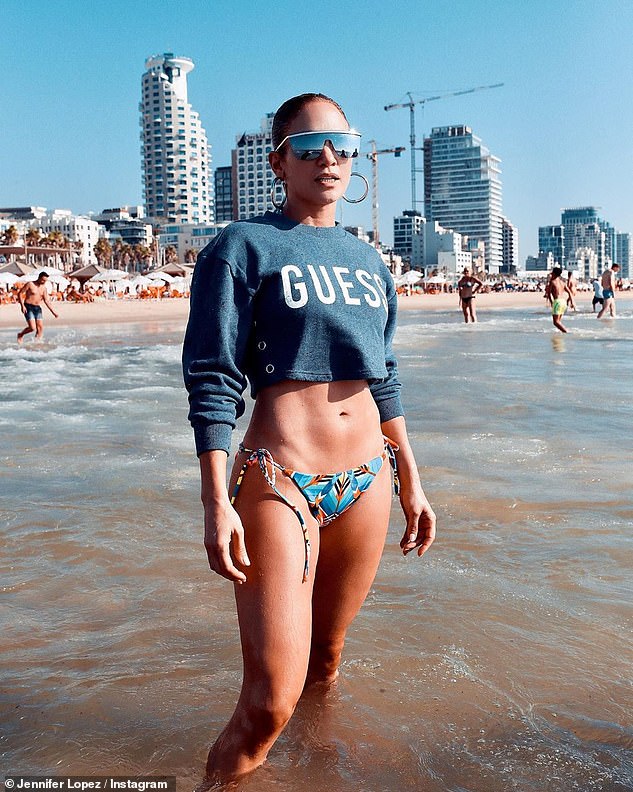 Beach babe: Here she has on a Guess top – she modelled for the brand last year – as she posed in the sea for a sultry snap