The woman who won Miss England, just last week, has started work as a junior doctor – and new photos show her hard at work.

Bhasha Mukherjee, 23, from Derby, gained two new titles in the space of 24 hours after winning the prestigious pageant in Newcastle last Thursday.

The following morning she started her role as an junior doctor at Pilgrim Hospital in Boston, Lincolnshire.

The beauty queen, who not only has a genius IQ score of 146 and speaks five languages – is happy to swap her sash for scrubs.

And now stunner Bhasha, who has officially started treating patients this week, has revealed she has been ‘humbled’ by the new role, as well as admitting that patients and colleagues have started to recognise her. 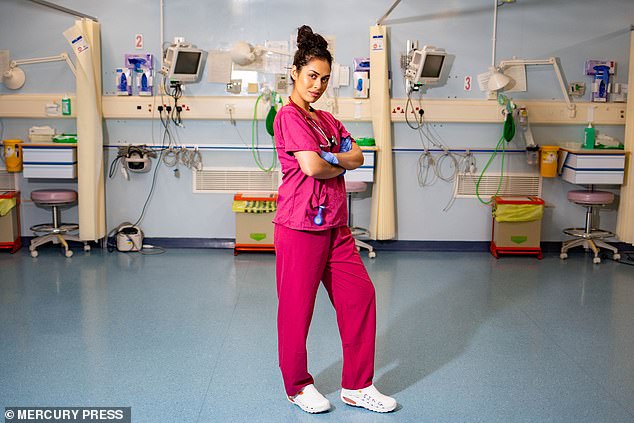 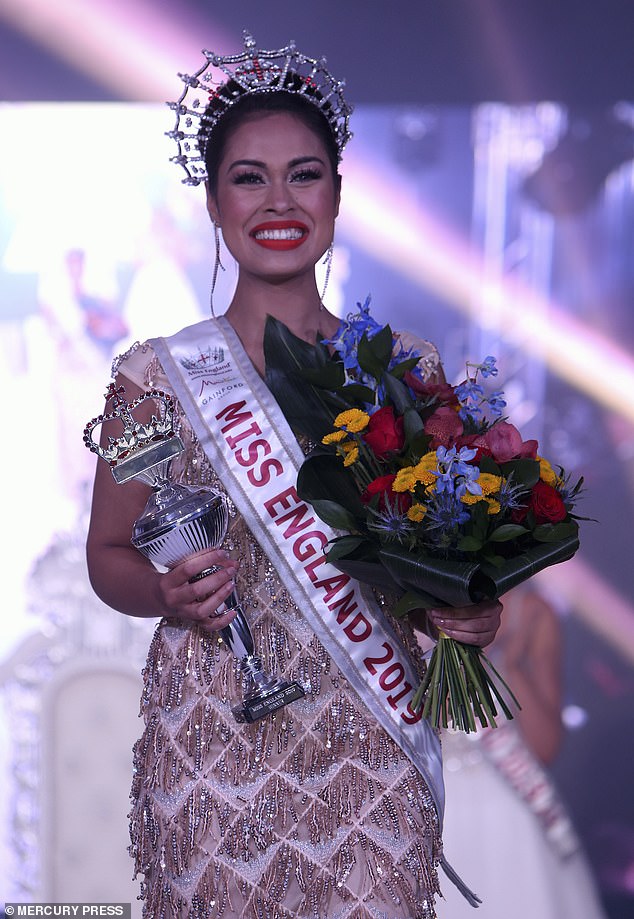 The beauty queen, who won Miss England this year, not only has a genius IQ score of 146 and speaks five languages but with two separate degrees in medicine is happy to swap her sash for scrubs too

Bhasha, who grew up in India, but now lives in Derby, after moving to the UK aged nine, said: ‘The first few days at work have been humbling, and it’s reminded me how amazing our NHS is and how hard the doctors and nurses work and how the focus is all about the patients.

‘I’ve not really had the chance to be Miss England or be glamorous – I’ve been focusing on my patients.

‘It’s been really nerve wracking, I couldn’t tell if I was more nervous about Miss England or about starting my job as a junior doctor.

‘The reactions of my colleagues and patients have been a slow burn – they’ve only just started recognising me and I’m glad that it’s not been a complete mobbing experience, because it’s nice to be able to be a nobody, so it didn’t get in the way of my work. 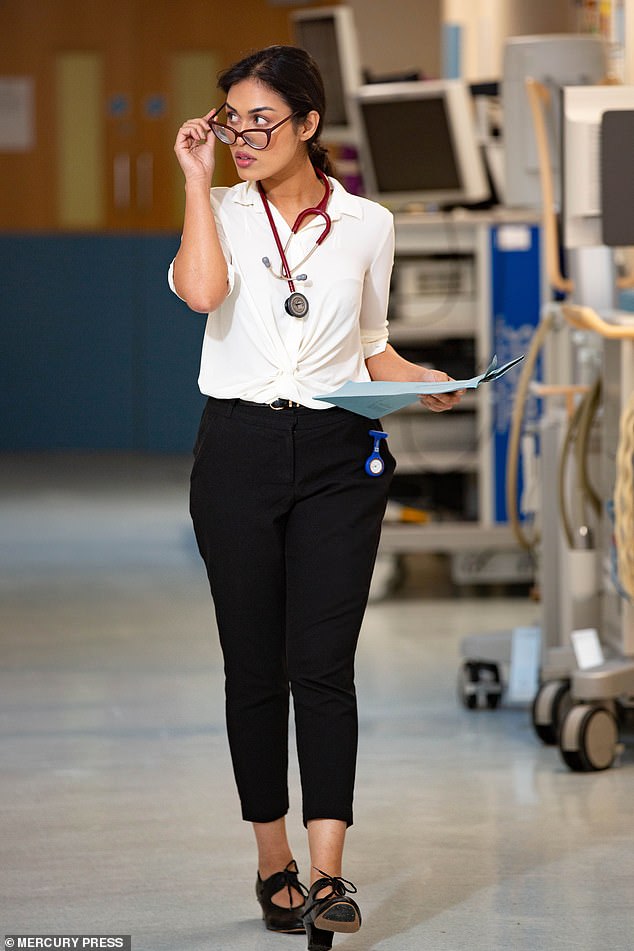 Last Friday morning she started her role as a NHS junior doctor at Pilgrim Hospital in Boston, Lincolnshire 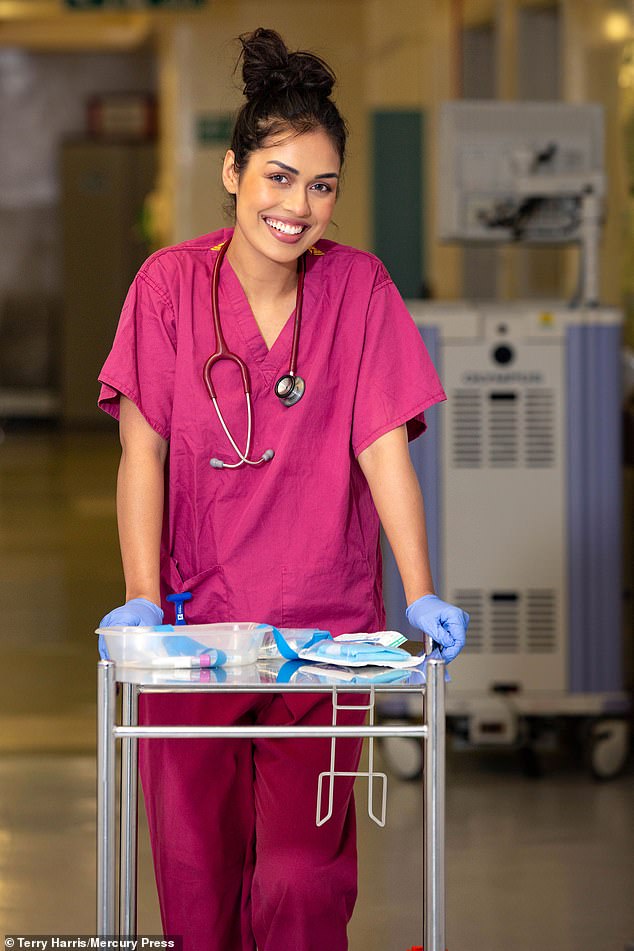 ‘My pageant career all started to happen while I was in the middle of studying at medical school – it took a lot of convincing for me to do it, but eventually I decided to do it to balance out my studying and give me a break.

‘It was a difficult choice to make between Miss England and becoming a doctor, but life is about making choices and I believe I’ve worked five years for this and the whole purpose of my life is dedicated to people.

‘A platform as big as Miss England gives you the opportunity to go beyond just the confines of the hospital and have a reach which is wider – so it has been a difficult choice.

‘Now that I balance being a beauty queen and also a doctor, I always remember that it’s very important to have two aspects to your life –  a glamourous one which gives you confidence and motivation, but at the same time it’s important to be grounded and to see the other side of life. 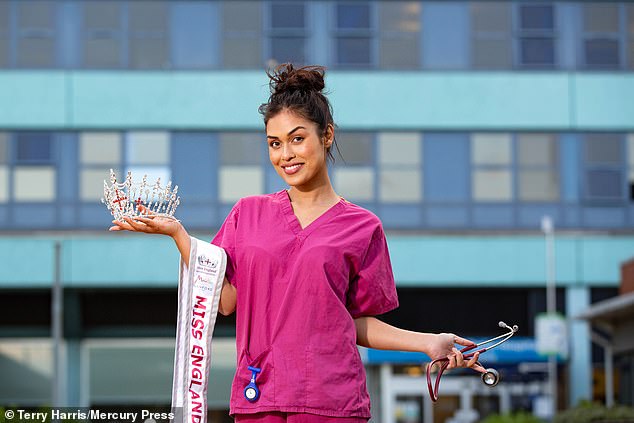 Bhasha Mukherjee, 23,at the Pilgrim Hospital, Boston with her scrubs on and also her new crown and sash

‘Being a doctor reminds me how precious life really is and actually makes me more grateful for everything that I’ve been able to do as part of my Miss England platform.

‘I want to become the kind of doctor I wanted to be when I was 17, and that’s to be a friend.

‘I want every patient of mine to leave the room knowing that they have made a lifelong friend and someone that they can always come to.’

A self-confessed ‘teacher’s pet’, Bhasha struggled at school with mum Mita, 51, revealing she was bullied for her glasses and crooked teeth and for ‘being an immigrant’ when she was younger. 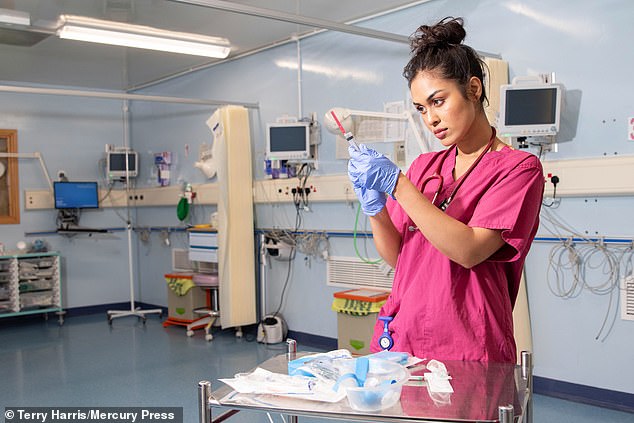 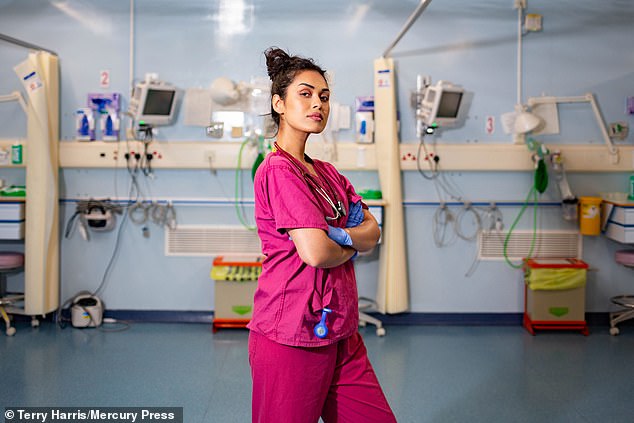 Throughout her studies, the ‘loner’ dreamed of being an astronaut, but once she left high school, she decided to try her hand in the performing arts and eventually found her way into modelling.

Bhasha said: ‘I was always the teacher’s pet in school – I won the Einstein Award for being the smartest in my class and I was the top of my school with my GCSE results.

‘I was a bit of a loner as a child as I was new to the country and moved about schools a lot, meaning that I was always branded the ‘new kid’. 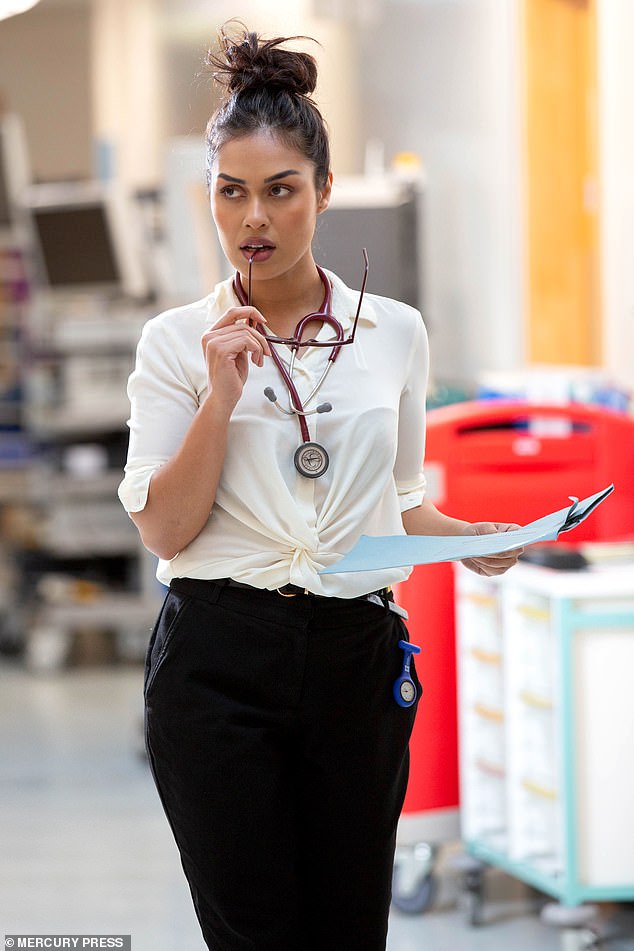 A self-confessed ‘teacher’s pet’, Bhasha said struggled at school with mum Mita, 51, revealing she was bullied for her glasses and crooked teeth and for ‘being an immigrant’ when she was younger 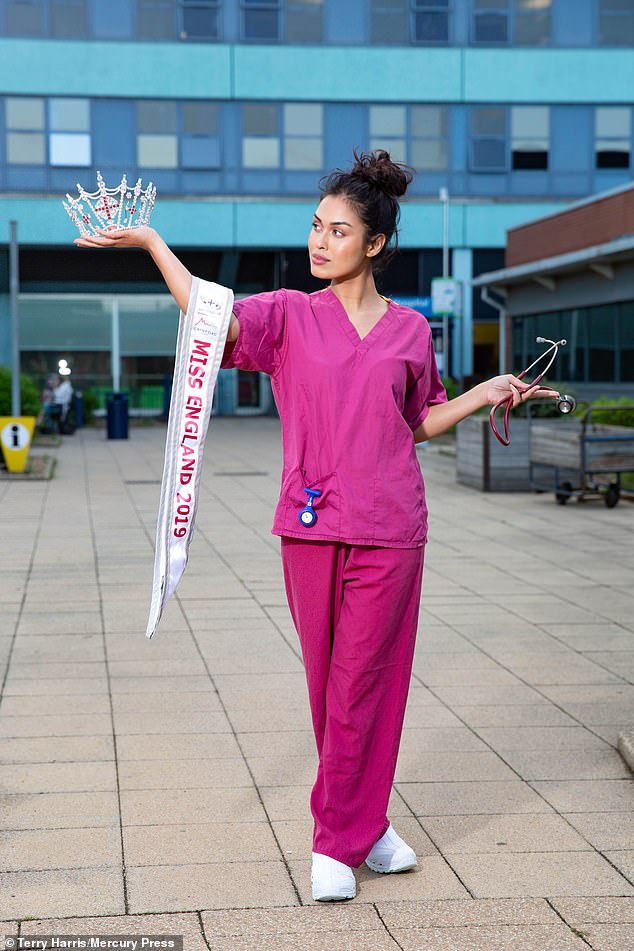 ‘I was teased a bit for being eccentric and dramatic, but my way out was studying and competitions – I was just so passionate about learning.

‘Some people might think pageant girls are airheads, but we all stand for a cause.’

Primark worker mother Mita added: ‘She wasn’t always such a great looker and she got bullied for that, and for being an immigrant.

‘But difficulty makes you what you are and makes you value what you have been given. 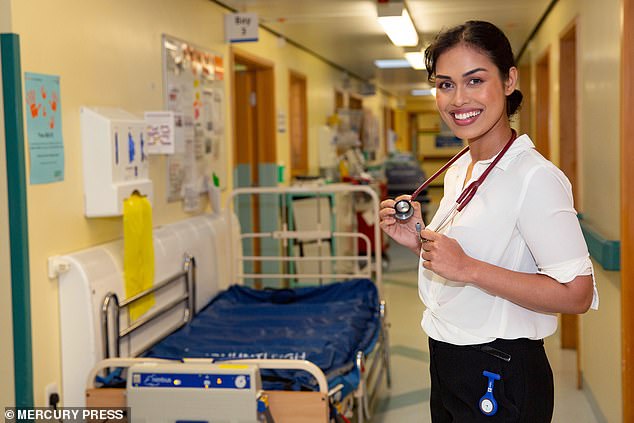 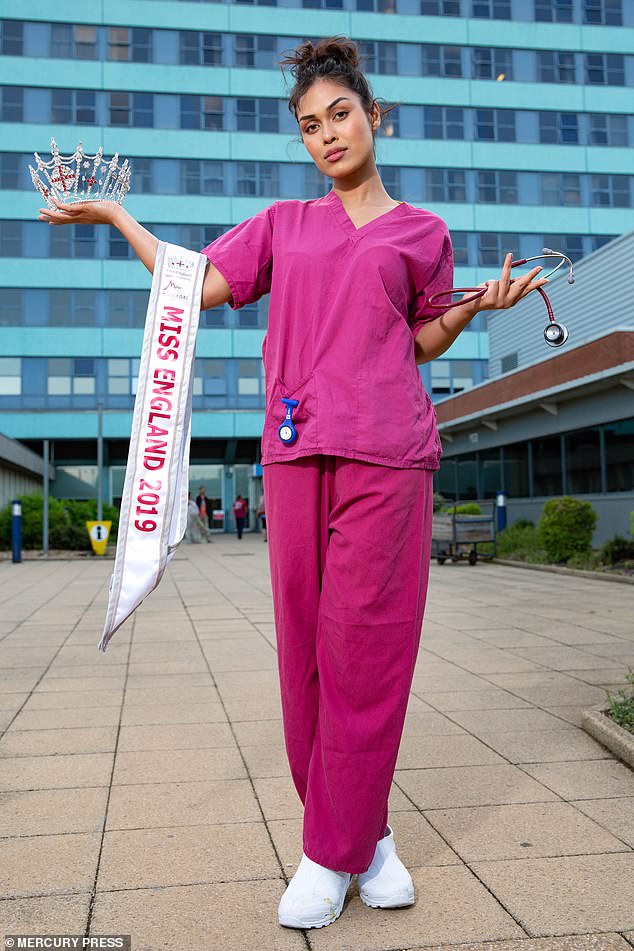 Bhasha was scouted in 2016 to compete in a pageant which aimed to increase diversity in beauty contests across the UK, before entering Miss England this year

‘It takes courage to carry on the fight and that’s what she did, she’s gone on to achieve everything she’s always wanted.’

Bhasha was scouted in 2016 to compete in a pageant which aimed to increase diversity in beauty contests across the UK, before entering Miss England this year.

The current face of Miss England 2019, who already holds a bachelor degree in medical sciences, earlier this month graduated with a second degree in medicine and surgery from the University of Nottingham – making her officially Dr Mukherjee.

Bhasha is now preparing for the prestigious global Miss World pageant in London in December.

She said: ‘I haven’t got long to prepare for Miss World, but as I say you get to the top of one mountain, only to realise the climb is not over yet!’

Gold dust could replace pills for adult acne, dermatologists claim
Strictly Come Dancing Christmas Special: Ann Widdecombe finally gets a TWO from Craig Revel Horwood
'Laughing' boy, 15, stabs teacher to death and fatally stabs another pupil
Jesy Nelson and Chris Hughes eat ice lollies as they blend in with holidaymakers in Barcelona
The Queen joins Kate Middleton and Prince William as they head to church today
London Fire Brigade is 'worryingly inadequate' watchdog says
Festive revellers let their hair down as Mad Friday hits Britain on the booziest night of the year
SpaceX set to FINALLY launch its next batch of 60 Starlink internet satellites after delays