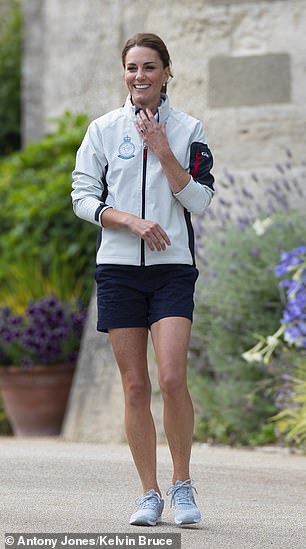 The pictures of a gap-toothed Prince George frolicking with his mum (pictured) and dad at the Cowes Regatta on the Isle of Wight, and of his sister Charlotte poking her tongue out at the crowds, are so joyous they’ll have warmed the flintiest hearts

The world is full of doom and gloom. We are told we’re about to fall off the cliff into a No Deal and this will be the wettest, coldest August for years — but then comes a ray of sunshine.

The pictures of a gap-toothed frolicking with his mum and dad at the Cowes Regatta on the Isle of Wight, and of his sister Charlotte poking her tongue out at the crowds, are so joyous they’ll have warmed the flintiest hearts.

Watch the video of Charlotte’s raspberry at the world and you’re struck by how natural it is. No controlled image. Just jolly good family fun.

And wasn’t Kate’s response to that raspberry just perfect? She burst into giggles and shooed cheeky Charlotte off stage while the crowds laughed with her.

Then there was William making jokes about his wife when she won the wooden spoon for coming last in a charity yacht race. They may be our future king and queen — but they could have been any family mucking about on a summer’s day.

And how reassuring that is. The Cambridges are a family at ease both with themselves and the public — giving us cause to believe the monarchy will be safe in their hands.

I say this as someone who has been a stern critic of Kate in the past. Before she married William in 2011, I dismissed Kate Middleton as a shallow social climber hellbent on nabbing her prince. She hung around for him so long I called her Waity Katie, and I feared she was a disaster waiting to happen.

I could not have been more wrong. That huge smile on her face as she played with her children and larked about lovingly with her husband shows she’s having the last laugh. 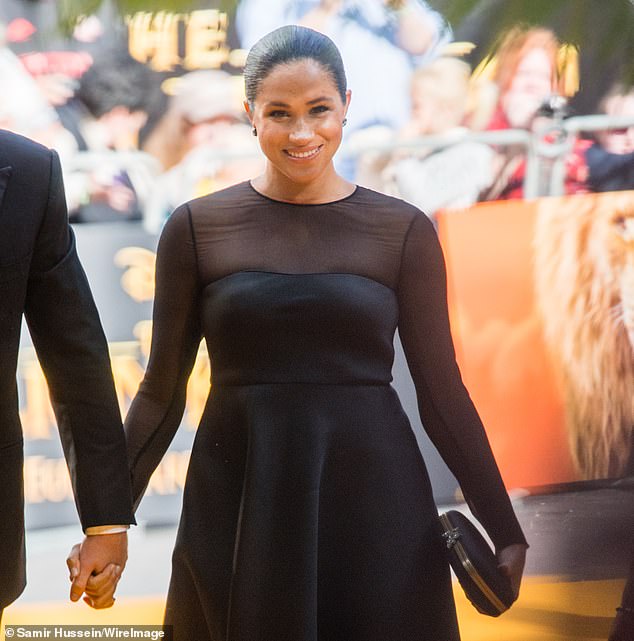 Despite difficult pregnancies, Kate was always ready to share her children with us. She and William have effortlessly woven their young family into the nation’s narrative.

There’s a lesson here for Harry and Meghan with their lectures about saving the world and controlled releases of pictures of Archie in poses so artful we can’t actually see him.

It’s a strategy, strikingly, that seems to have led to fewer smiles and less laughter from Harry and Megs when they appear in public — as if they’ve forgotten how happy and carefree they seemed when he first introduced her to us as his fiancee.

As the National Anthem states, we want our monarch — and the Royal Family — to be both ‘happy and glorious’. Kate and her family looked blissfully happy this week. Proof, as I readily admit, that we should be grateful she waited for her prince.

Hats off to Peaky Blinders

Historians are ripping apart the new series of Peaky Blinders. They claim the real-life Brummie mobsters were not adults as portrayed, but teenagers.

Their famous peaked flat caps with razors sewn into them to attack other mobs are an urban myth. And the song The Boys Of The Old Brigade was written in the Seventies, not the Twenties.

Crikey, they could sing Mama Mia! for all I care — if Cillian Murphy is still playing Tommy Shelby, I’ll be glued to the TV. 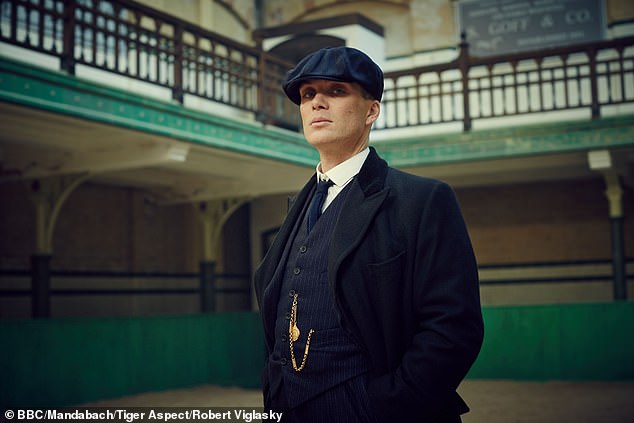 Crikey, they could sing Mama Mia! for all I care — if Cillian Murphy is still playing Tommy Shelby (pictured), I’ll be glued to the TV

You have to feel sorry for heiress and mother-of-one Chloe Green, looking gorgeous and slim posing in a bikini — with her ‘Hot Felon’ boyfriend Jeremy Meeks nowhere to be seen. 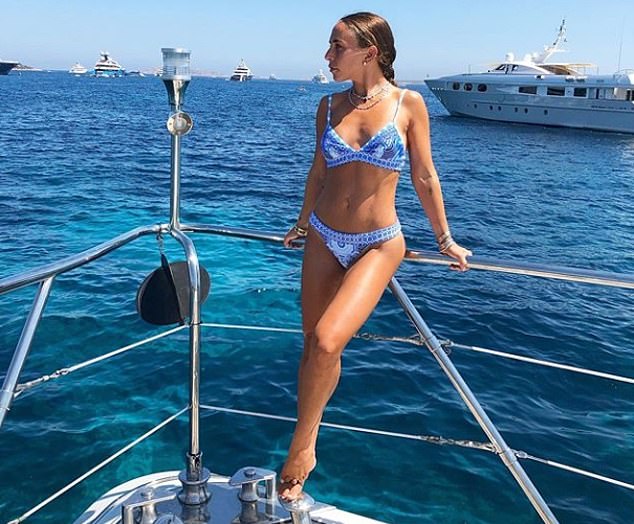 You have to feel sorry for heiress and mother-of-one Chloe Green (pictured), looking gorgeous and slim posing in a bikini — with her ‘Hot Felon’ boyfriend Jeremy Meeks nowhere to be seen

Spare us these legal wimps

Barrister Amy Rollings, 31, caused uproar claiming the men in the legal profession were predatory, sexist dinosaurs. Bride-to-be Amy was disgusted when a fellow lawyer said she would be a ‘kept woman’.

Meanwhile, a female solicitor was so upset when a man’s hand brushed her bottom at a conference she ran out the door and was ‘shaking all the way home’.

Snowflake alert! Yes, these creeps are ghastly, but surely a simple retort of: ‘Get your hand off my a**e or I’ll deck you!’ would have done the trick.

What hope is there when lawyers see themselves as the victims?

Having just given her a £250,000 golden-handcuff deal, the Beeb had to grovel after Stacey Dooley accused a group of Muslim brides of performing a single-fingered ISIS salute when, in fact, it might have been an Islamic call to prayer.

What the BBC should really have been apologising for was sending this tiresome woman into a Syrian refugee camp and putting the result on our screens in the first place.

Gwyneth Paltrow poses on a beach with her new husband Brad Falchuk, her ex-hubby Chris Martin and his girlfriend Dakota Johnson.

What a nightmare ex she’s become. Time to consciously cover-up, Gwynnie, you shameless show off.

Norwich Cathedral has added a 55ft inflatable plastic helter skelter stairway to heaven in its nave to entice worshippers into the church. Whatever next, a trapeze and angel’s wings so you can join the heavenly host?

Love Island’s Curtis Pritchard reveals that, despite his affair with Maura Higgins, he wouldn’t rule out a same-sex relationship. No dip, Sherlock. With his plucked eyebrows and perma lipgloss, I always thought he might be open-minded in that department.

When Summer Monteys-Fullam first appeared on Paul Hollywood’s arm, wise heads said it would end in tears. Two years on and he’s locked his buxom barmaid out of their home, even refusing her access to the £9,000 hot tub he installed as a gift for her 24th birthday.

After refusing to sign a non-disclosure agreement, she’s free to write a tell-all book.

We’re all desperate for her to serve this dish of revenge piping hot — accompanied by the song Summer Nights from the movie Grease: ‘Tell me more, tell me more . . .’

Scientists are heralding a new hormone injection that controls appetite and could help obese people to lose almost 10lb in a month.

Surely, the overweight should simply display a little willpower, go on a calorie-controlled diet and lose at least that much and more. They just have to eat less.

Former Strictly star Louise Redknapp says the reason she ran a red light, adding another three points to the six on her driving licence, was the agony of her divorce.

True, it must have been tough dumping your husband of 19 years and embarking on an abysmal return to your singing career.

The next time we residents of the leafy suburbs complain that the police failed to attend immediately when some vagabond stole our hanging baskets, spare a thought for PC Stuart Outten who was repeatedly slashed by a machete-wielding manic.

He had stopped a white van on a routine job believing the driver did not have insurance. What the attacker did have was a 12in knife. It almost cost the PC his life.

The sooner Boris gets his 20,000 extra cops on the streets, the better.

Queen Letizia of Spain cuts a smart figure in blue shirt and pinstriped trousers
Total Recall tech will see painful memories replaced with happy ones
Huawei CFO asks for bail before possible extradition to the U.S.
Suspended pairs skating champion John Coughlin dies at 33
Bill Wyman defends relationship with second wife who he met when she was 13 and he was 47
Video shows adorable moment a polar bear rolls around in ice cubes during a hot day at a Utah zoo
Mother-of-two firefighter reveals how she hit the gym after being told she was 'too weak'
Trump retweets UFC' poll after calling his response to Baghdad embassy attack 'the anti-Benghazi'