President Donald Trump tore into Hollywood Friday, accusing it of producing ‘racist’ films at a time when political rivals have called the president racist for his attacks on illegal immigration.

His attack on Hollywood came amid controversy over an NBC Universal film that depicts ‘elites’ who pay to hunt ‘deplorables’ for sport.

Trump veered into his slam on Hollywood when asked about online bias, after Twitter blocked Senate Majority Leader Mitch McConnell’s campaign account when it tweeted video of a threat against him. That prompted the Trump campaign and others to suspend advertising on the platform.

Asked about conservatives being blocked on Twitter, Trump made reference to tech firms coming to the White House to discuss the recent shooting massacres, then blasted the firms as unfair to Republicans, and leveled the racism charge at Hollywood. 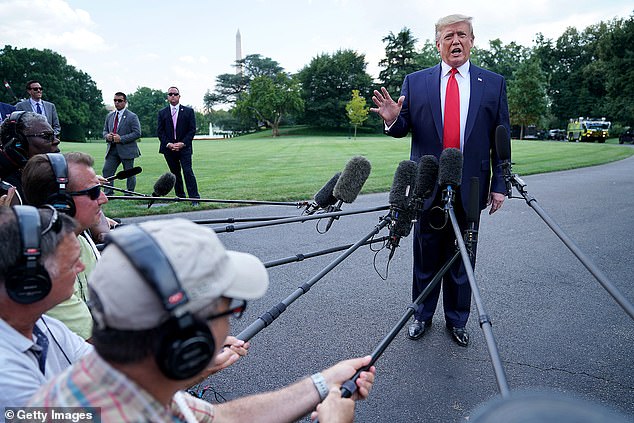 President Donald Trump on Friday called Hollywood racist, amid controversy over a film that shows ‘deplorables’ being hunted

‘We are looking at that right now,’ Trump said when asked about the Twitter incident. ‘We have a lot of these companies coming in a little while. We’re going to be very tough with them,’ he continued. ‘They treat conservatives very unfairly.’

‘Hollywood – I don’t call them the elites. I think the elites are the people they go after in many cases,’ Trump said, switching gears. ‘But Hollywood is really terrible. You talk about racist. Hollywood is racist.’

‘What they’re doing with the kind of movies they’re putting out, it’s actually very dangerous for our country. What Hollywood is doing is a tremendous disservice to our country,’ Trump said.

Trump was apparently referencing a Friday invitation to leading tech firms to discuss online extremism in the wake of the El Paso and Dayton massacres, although it was not billed as being about bias against conservatives.  Earlier this week, Trump went after violent video games, saying they contribute to mass shootings. 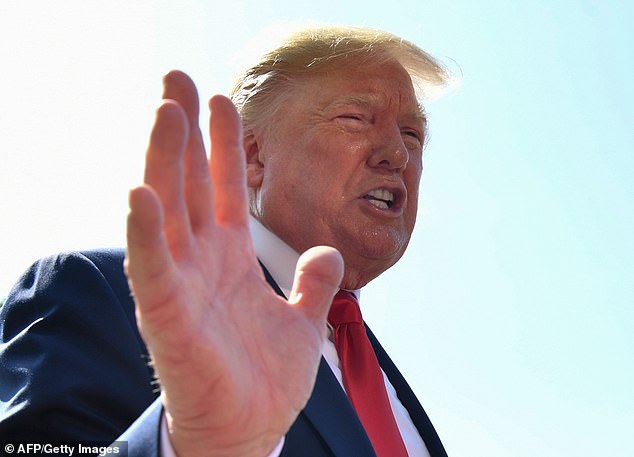 ‘Hollywood – I don’t call them the elites. I think the elites are the people they go after in many cases,’ Trump said. ‘But Hollywood is really terrible. You talk about racist. Hollywood is racist’

‘We have now in a little while all of the heads of the biggest companies coming in and we’re going to talk to them. They treat conservatives, Republicans totally different than they treat others, and they can’t do that,’ Trump said.

The president didn’t any content in particular that he found racist. Hollywood has been coming under fire from conservatives, including on Fox News, for NBC Universal’s planned release of the controversial movie The Hunt next month.

The film has drawn backlash for depicting a scenario where ‘privileged’ vacationers hunt ‘deplorables’ for sport.

‘There are no plans to not release the movie. No plans to move the release,’ a studio source told

There have been widespread objections to the movie’s plot, particularly in light of recent mass shootings, but NBC Universal executives who are aware of the sensitivities are not planning to take any action at the present time. 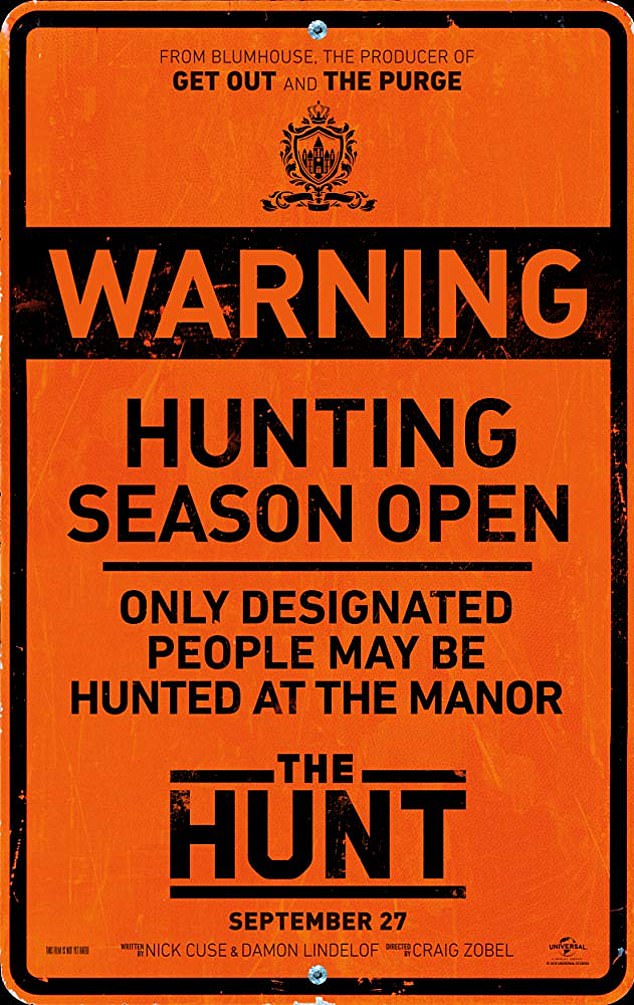 NBC Universal is still pushing ahead with plans to release the movie The Hunt despite mass shootings in El Paso, Texas, Dayton, Ohio, and Gilroy, California 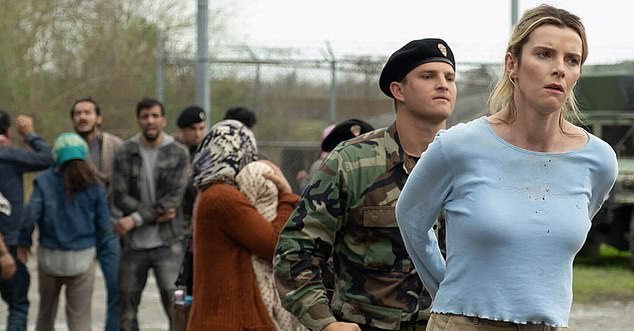 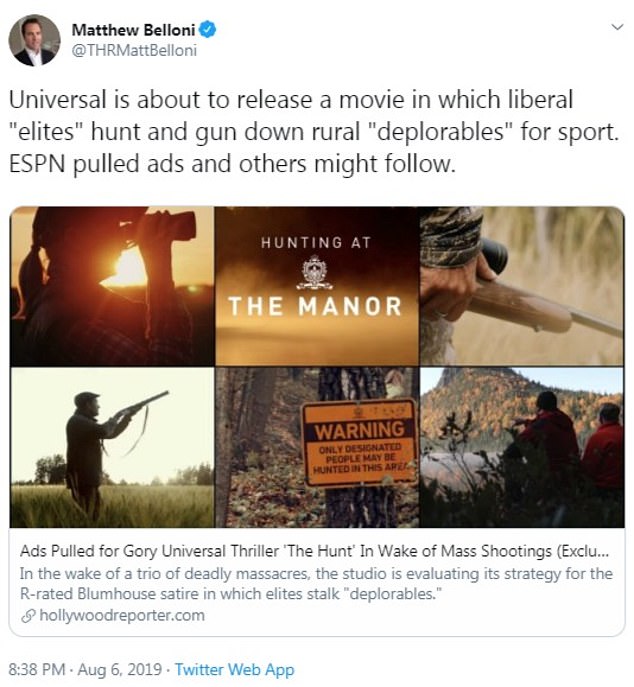 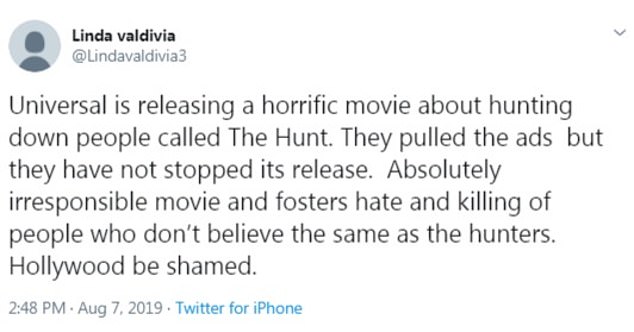 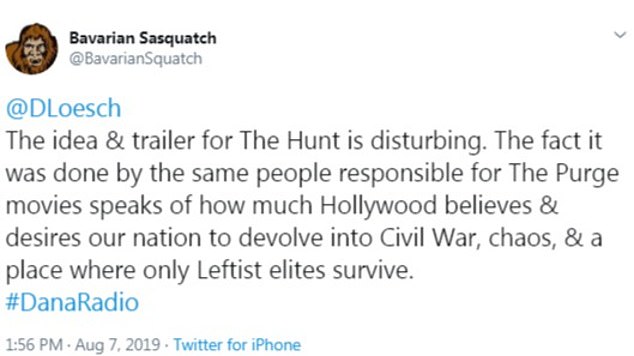 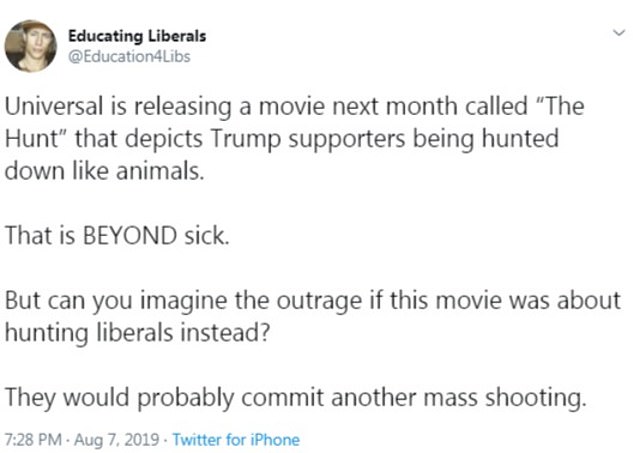 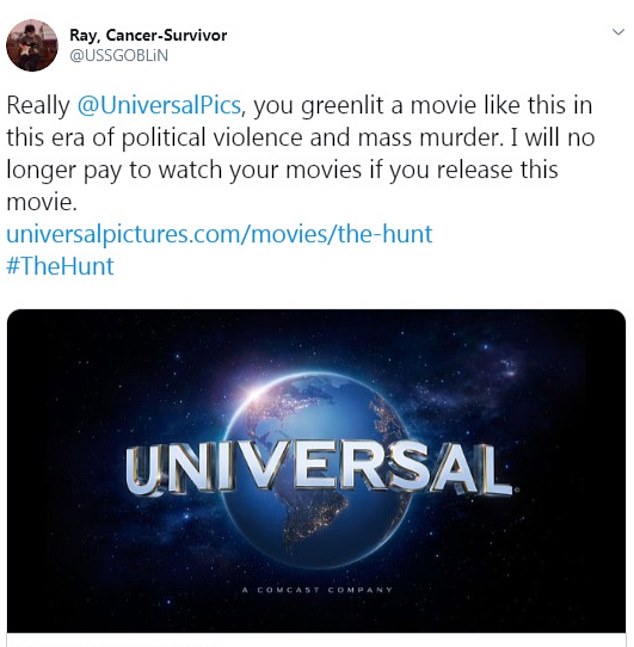 The Hunt is supposedly a satirical take on wealthy thrill-seekers who take a private jet to a five-star resort where they embark on a ‘deeply rewarding’ expedition that involves hunting down and killing designated humans.

NBC’s Universal Pictures has agreed to ‘temporarily pause’ the movie’s marketing campaign in the wake of the mass shootings in El Paso, Texas, and Dayton, Ohio that left a total of 34 people dead.

The violent, gun-toting film revolves around a group people from predominately Republican states being kidnapped and hunted for sport by liberal elites. 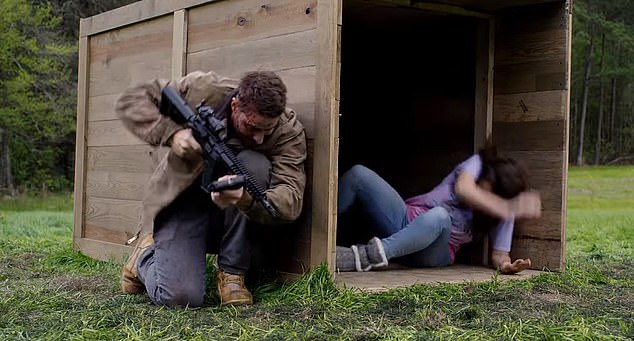 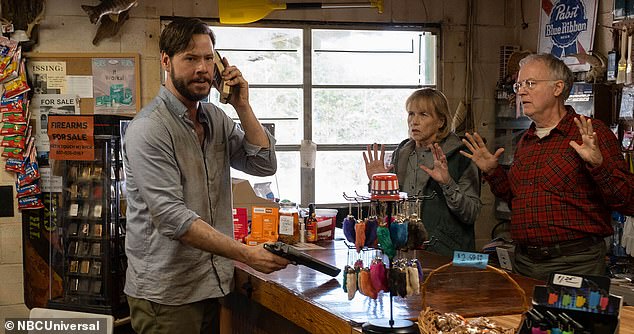 In the trailer, Swank’s character says: ‘We pay for everything, so this country belongs to us.’

In the screenplay for movie, characters in the film apparently refer to the victims as ‘deplorables,’ – a term that Hillary Clinton infamously dubbed Trump supporters during the 2016 election.

The film was originally called Red State Vs. Blue State.

The movie has caused outrage, with conservatives calling it everything from ‘political violence’ to ‘sick murder fantasies about right-wingers.’

While some trailers for the film have been pulled, there’s an internal debate deliberating the film’s next steps.

But decisions will need come fast, as there’s an promotional blitz planned in September.

Universal is reportedly assessing their plan as a ‘fluid situation’ and it could change ‘if people think we’re being exploitative rather than opinionated.’ 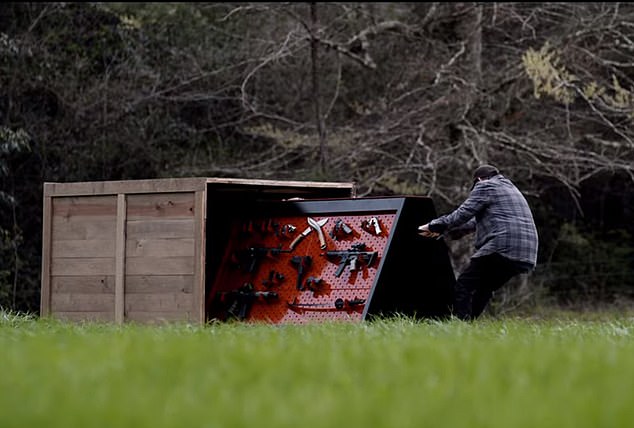 In a politically divisive era, several film studios refused to buy the film because of its crazy plot 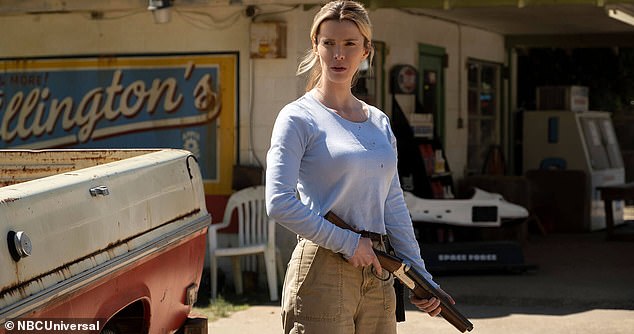 According to The Hollywood Reporter, the controversial film was divisive back in May 2018 when film chief Donna Langley acquired the script and fast tracked it on a $18 million budget.

One executive told The Hollywood Reporter, ‘The idea seemed crazy’ and didn’t even read the script.

A filmmaker involved with Universal said: ‘Employees in different departments were questioning the wisdom of making such a movie in these times.’ 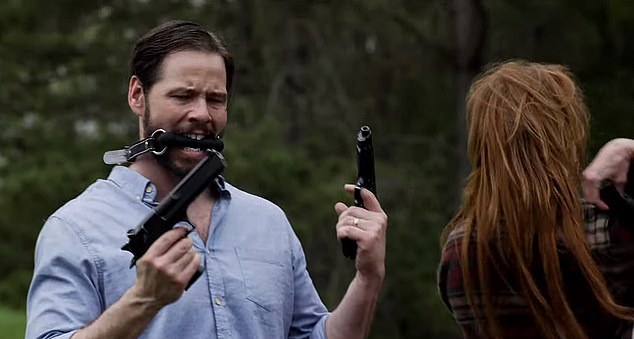 He continued, ‘In light of the horrific [recent shootings], is this not the most craven, irresponsible, dangerous exploitation?’

A Universal executive believes the movie, ‘is meant to show what a stupid, crazy world we live in. It might even be more powerful now.’

On August 3, gunman Patrick Crusius entered a Walmart and killed a total of 22 people and left more than two dozen wounded in El Paso, Texas.

A mass shooting happened the next day in Dayton, Ohio when Connor Betts opened fire at a bar and killed 10 people.

It came just days after Santino William Legan, attacked The Gilroy Garlic festival in California. Four people were killed, including the gunman and a six-year-old boy on July 28.