A police officer is being treated in hospital after he was attacked with a machete when he stopped a vehicle in east .

The officer was stabbed after attempting to stop a van at the junction of Coopers Lane and Leyton High Road in Leyton and remains critically injured.

The driver of the vehicle, aged in his 50s, initially failed to stop but then got out of the van and injured the officer with the machete, police said.

The policeman then managed to use his taser despite having been stabbed, with the alleged attacker then arrested by another officer.

Commander Richard Tucker said the attack was ‘frenzied, unprovoked and shocking’. This is while Mayor of London Sadiq Khan said he was ‘utterly appalled’ by the attack. 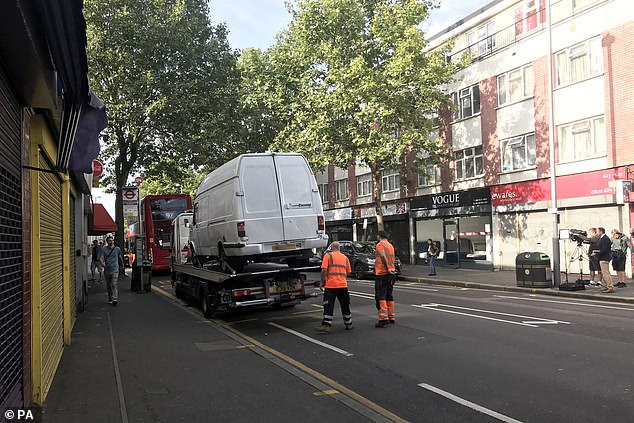 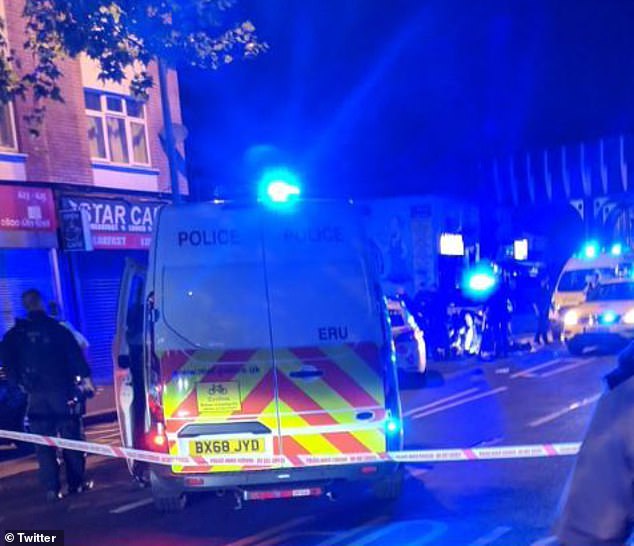 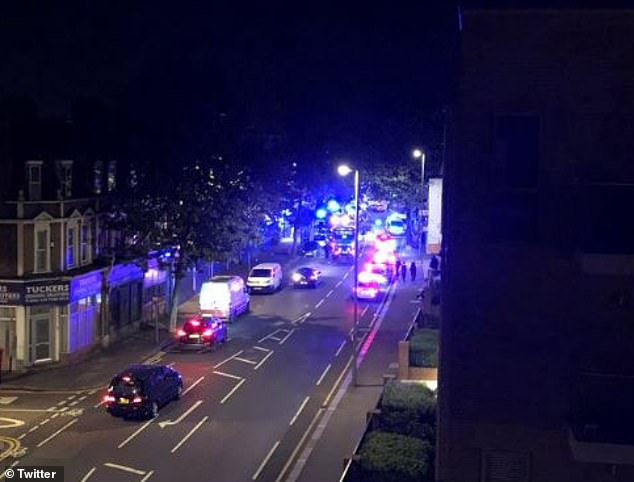 Residents in the area took to Twitter to share images of the scene, as blue lights lit up the street 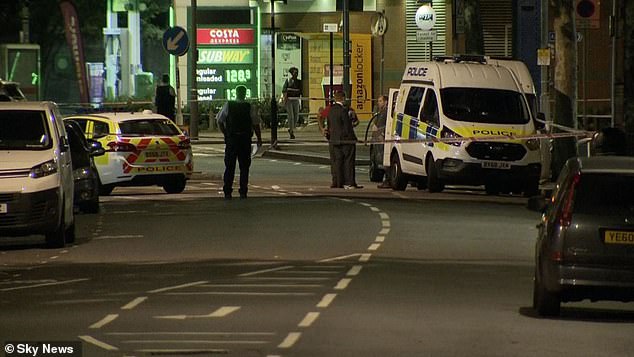 Officers were pictured on the scene with police vans and cars after the attack in Leyton. east London 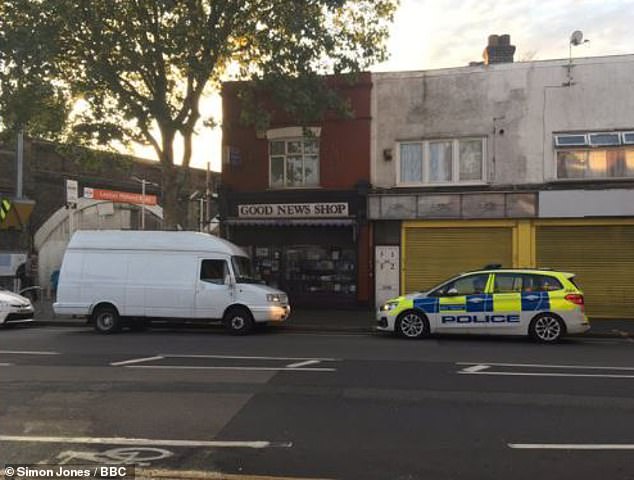 Police remained on the scene this morning and the van was still there. It is thought to be removed later today

The injured officer, aged in his 30s, was taken to hospital by ambulance and the Metropolitan Police said his condition is believed to be critical but stable, and his next of kin have been informed.

The driver, who did not require hospital treatment, has been arrested on suspicion of grievous bodily harm and taken to an east London police station.

A crime scene remains in place in the area and police have said there is nothing to suggest the incident is terrorism related.

It comes as Mr Tucker said this was a time that ‘courageous people needed to join the police’ and Met Police federation chairman Ken Marsh said ‘enough is enough’ when it comes to knife crime.

‘This is horrific news. Police officers across London are out there every day at risk protecting the public – and sadly, yet again, a Metropolitan Police officer has suffered a severe injury on duty.

He added: ‘Enough is enough. Police officers should be going home at the end of their shifts. Not to hospital.’

The incident comes as new data suggests that the number of women and girls carrying knives in England and Wales is on the rise. 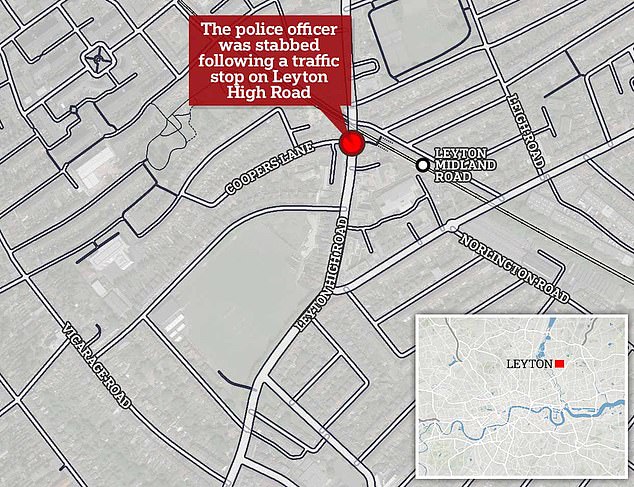 The map above shows the area in Leyton, east London where the officer was attacked after doing a routine vehicle stop 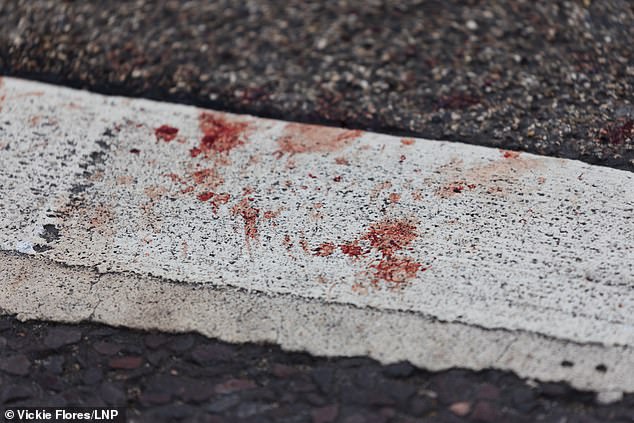 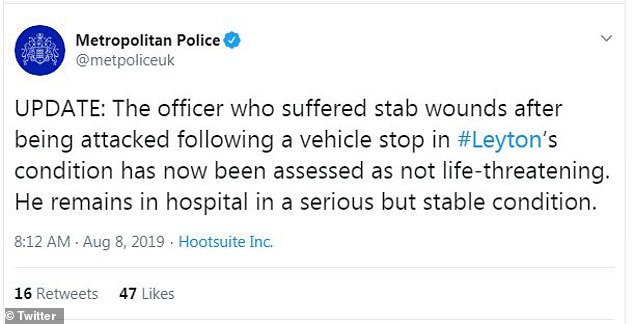 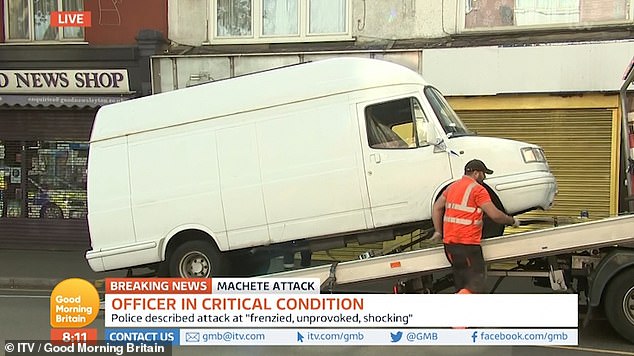 From 2014-2018 police in England recorded 5,800 cases where women and girls had been caught with a knife. The youngest being caught was 7-years-old and the report found that the role of females in knife crime is often overlooked.

Speaking on Good Morning Britain this morning, Commander Tucker urged members of the public to come forward and highlighted that the officer has now told him ‘he’s ok’.

‘After being stopped the man got out of the van and stabbed the officer in the head and in the body. The officer is in the Royal London, he is seriously injured but he will make a recovery, he’s having an operation at 10am and he is very shaken up.

‘We have footage of the incident and I would like to thank members of the public who came out to help and the staff at Royal London. 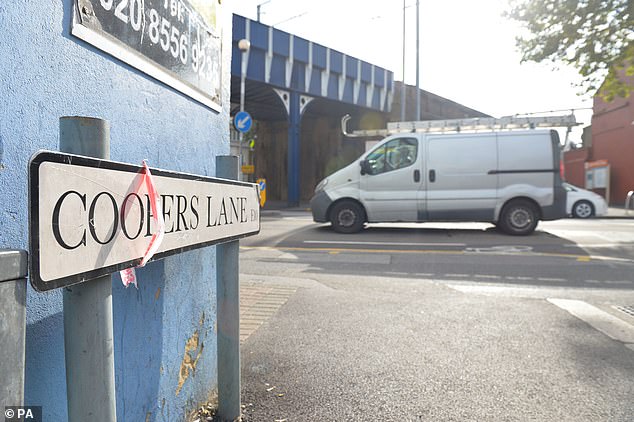 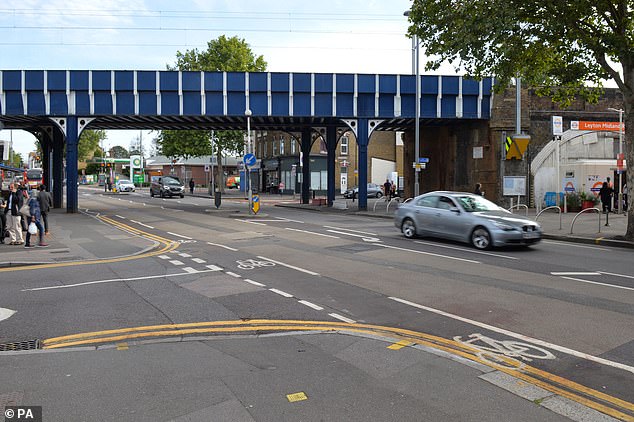 ‘For members of pubic who were there I urge you to come forward , while we have a man in custody we need to get a fuller picture of what happened.’

He added that the officers are ‘London’s officers’ and said this incident highlighted the ‘amazing’ job they do every day.

‘They are fighting some of the most violent people in society to make London safe. Policing is a very dangerous job at times and we do it to look after people.

Later on he added that it hadn’t been a ‘more serious attack’.

‘It’s shocking but, unfortunately, it’s not uncommon. This is a particularly nasty event but I would say there’s always a threat being a police officer. 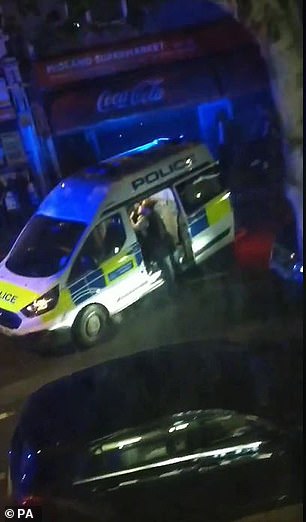 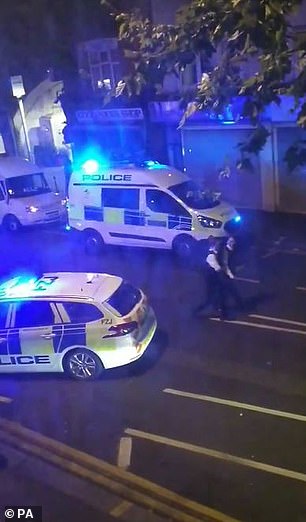 ‘There’s been a spike in knife crime, not just in London. In this case the man arrested is not a young man, he’s in his 50s.

He described the attack as a ‘a symptom of people having less fear of the police.’

Mr Tucker added: ‘I’ve been in police for a long time – there’s certainly a sense of a lack of respect, not just for police but for authority.

‘The attack lasted a number of seconds, but the actual engagement with this man probably lasted about two minutes.

‘It was completely unprovoked, it was a straight forward vehicle stop for no insurance.’

He called for harsher sentences for knife crime against officers.

Mr Tucker added: ‘Anybody who takes a knife and is prepared to use it, you’re rolling a dice, it could have been murder.

Asked if he believed the response of the attacker was due to ‘fear of police’, Mr Tucker, who has been at Scotland Yard for 33 years, said: ‘I’ll have to go and reflect on that.

‘I’ve been in the police a long time, there is certainly a sense of a lack of respect not just for the police but for authority, whether that’s people who work in a shop, drive a bus, ambulance staff.’

He added: ‘We want people to work for the police and this is a call for special people to come and join the police, who are courageous and brave and willing to go out and actually confront these types of people.’

Mayor of London Sadiq Khan praised the police force and said he is ‘utterly appalled by this sickening attack on a serving Met Police officer’. He added that the incident is a ‘reminder that our police risk their personal safety every time they go to work.’ 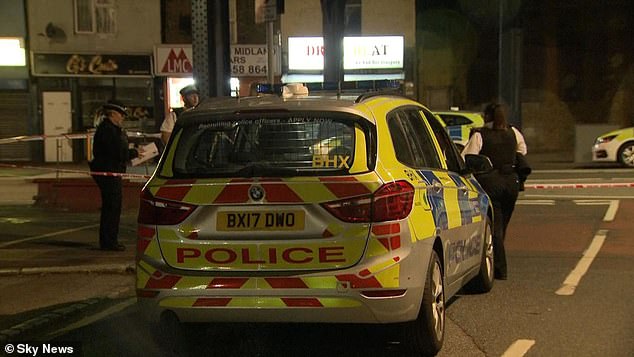 She added: ‘What began as a routine vehicle stop has transformed very quickly and unexpectedly into an unprovoked attack with a weapon.

‘Our thoughts are with the injured officer and his family and we wish him a full recovery.

‘I would like to commend his bravery and resilience especially as he managed to draw a taser, despite being repeatedly stabbed, to prevent the suspect harming anyone else and to protect himself from further injury,’ she said.

‘This incident highlights the very real risk that police officers can be confronted with on a daily basis and the courage and professionalism officers demonstrate when doing their job.

Police have asked anyone who witnessed the incident to call 101 or Crimestoppers anonymously on 0800 555 111 and quote reference CAD3/8August.

Lundqvist ties Plante on NHL wins list, Rangers beat...
Five years after she gave her kidney to a stranger, kind-hearted donor meets the man she saved
May will ‘destroy’ the Tory party if she caves in to soft Brexit demands
This Morning viewers clash over whether teachers should use reasonable force in schools
The revolution that would spell ruin: Labour's plans amount to a Marxist nightmare
David Cameron admits he failed to follow advice from George Osborne to 'destroy' Boris Johnson
Judge praises bravery of beauty therapist, 31, taken hostage and stabbed by her ex
Labour's Tom Watson QUITS