A protester has died after being chased by police for defying a curfew in Kashmir, which was imposed after the Indian government revoked its autonomous privileges.

Police said more than 100 people have also been arrested amid a lock-down which has seen the streets flooded with armed officers and soldiers in an attempt to head-off trouble.

Despite the paralysing curfew, sporadic protests have been reported in the main city Srinagar, including hundreds of youngsters throwing stones. 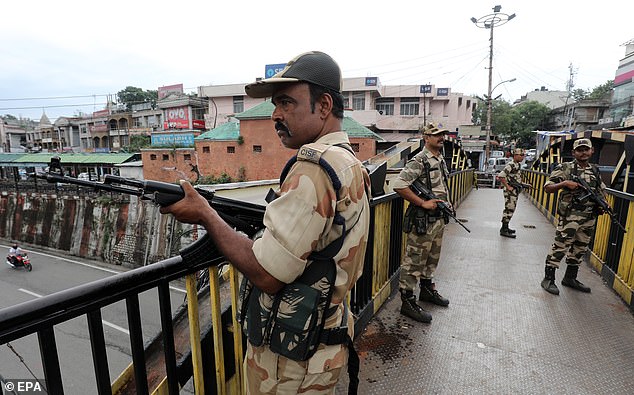 Indian paramilitaries patrol the streets of Jammu, in Jammu-Kashmir state, which was placed on lock down after its autonomous privileges were revoked 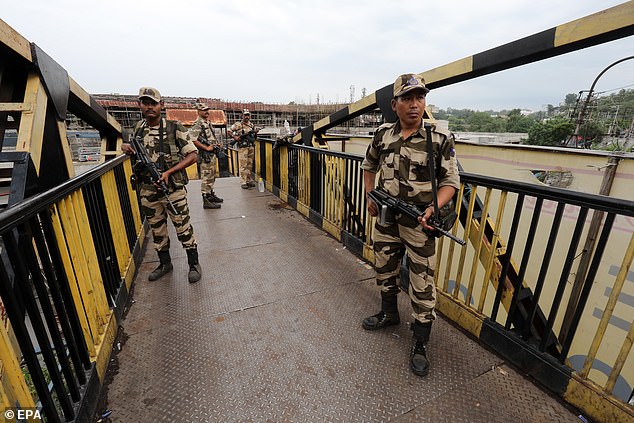 Despite the heavy police and army presence, there have been sporadic protests in the regional capital of Srinagar, including by hundreds of rock-throwing youths 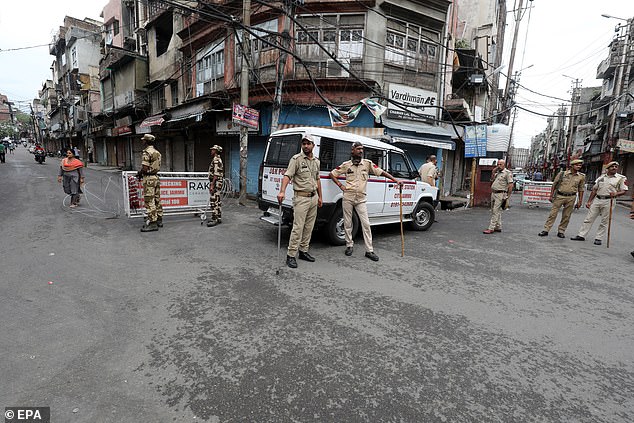 Police confirmed that one protester had died Wednesday after a chase with officers, but refused to give any further details 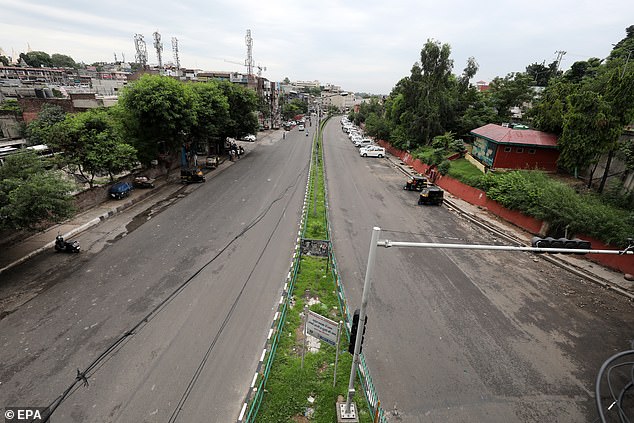 The cities of Jammu (pictured) and Srinagar have been left virtual ghost-towns amid the curfew, though protesters have tried to defy it

The Indian-administered state of Jammu-Kashmir has long been able to make its own laws due to an article of India’s constitution which was revoked this week.

The move is controversial because Kashmir is India’s only Muslim-majority state, while the ruling party is made up of Hindu nationalists.

Both India and Pakistan claim Kashmir in its entirety and went to war over the territory, before settling into an uneasy standoff.

There is a long-running insurgency against Indian rule in Jammu-Kashmir which has seen an estimated 70,000 people, mostly civilians, killed in attacks since 1989.

Home to more than one million people, the capital of Srinagar has been reduced to a ghost-town since the curfew was imposed.

Armed soldiers stand on street corners and in front of barbed-wire barricades are among the few people to be seen.

Locals and even security personnel fear that once the curfew lifts, unrest will break out as protesters vent their anger and frustration at the national government’s action. 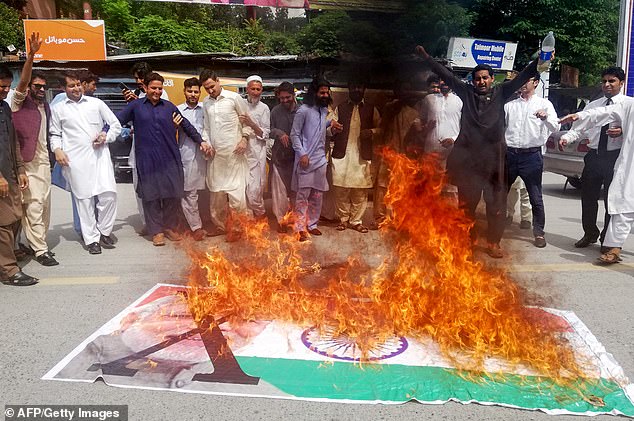 Protests have been sparked in both India and Pakistan by the decision, including in the Muzaffarabad, the capital of the Pakistan-administered portion of Kashmir 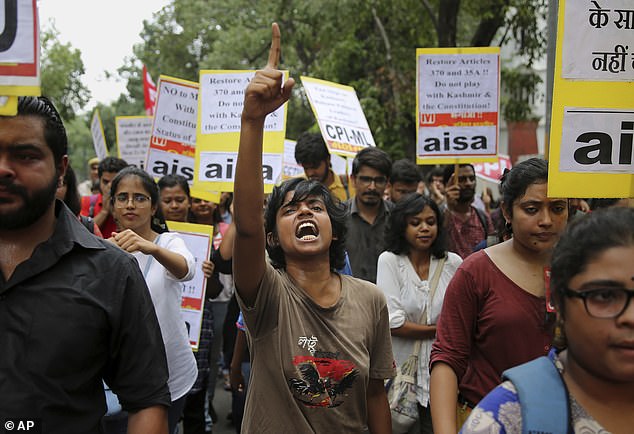 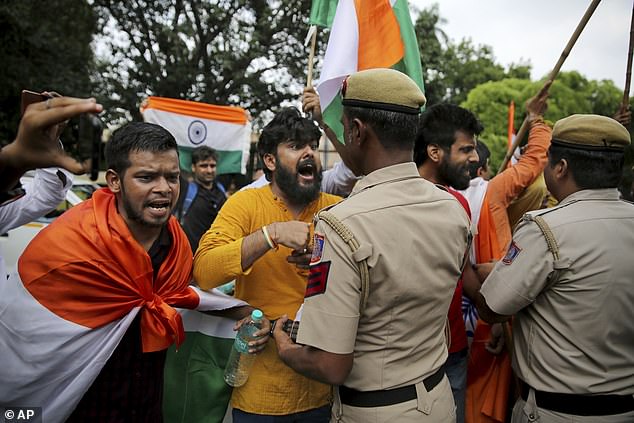 Pakistan has condemned India’s move to strip Jammu-Kashmir of its autonomous status and vowed to go to ‘any extent’ to protect the region.

‘The Pakistan Army firmly stands by the Kashmiris in their just struggle to the very end,’ a spokesman said.

Pakistan has never recognised India’s jurisdiction over the region, which it claims in its entirety, and describes its presence there as an occupation.

The region is currently split along a Line of Control established in 1972, though there is a long-running insurgency in the Indian-administered half against Delhi’s rule.

‘I’m sure people in the valley are not going to take this lying down.’

An armed rebellion against Indian rule has raged in the valley since 1989, claiming more than 70,000 lives, mostly civilians.

Long a semi-autonomous state where only local residents could buy land or take government jobs, Kashmir’s new status is as a territory directly ruled by New Delhi.

With phone and internet services still cut and movement around Kashmir restricted, it is difficult to gauge how residents feel about their loss of autonomy – if they know at all.

But those that AFP spoke to were fearful about what will happen next.

‘Not even in my wildest dreams had I thought India would ever do this to us. I have lost every hope in the Indian democracy and there’s a sense of hate for them now,’ said Srinagar local Shahnawaz Hussain.

Sporadic protests have taken place, and one youth chased by police jumped into a river and died. 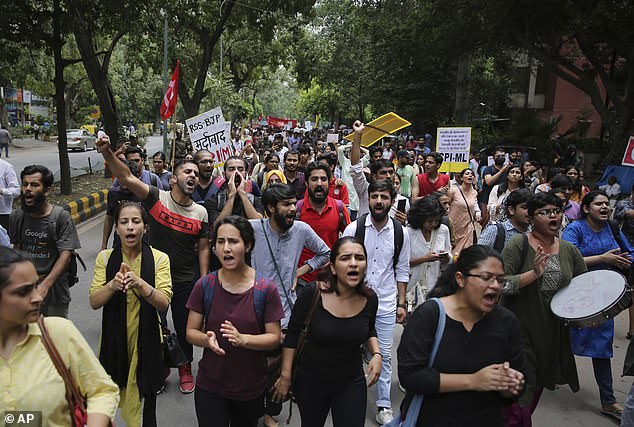 At least six people were admitted to a Srinagar hospital with gunshot wounds and other injuries, a source at the facility told AFP. Authorities continue to insist the region is peaceful.

There is already hostility towards scores of migrant labourers lugging heavy bags as they look for transport out of the territory.

‘Go back from here, this is our land,’ voices shout from a nearby building.

‘We know Kashmir is seething, it will explode into violence but we don’t know when,’ a security official told AFP on condition of anonymity.

‘I don’t know how the lockdown can be lifted without an explosion of protests.’

He told AFP the satellite phones issued to around 300 administration and police officers were barely working, adding: ‘It’s as if some invisible natural calamity has hit us.’

Meanwhile, soldiers man checkpoints about every 100 metres on main roads and only people in essential jobs are allowed to leave their homes. 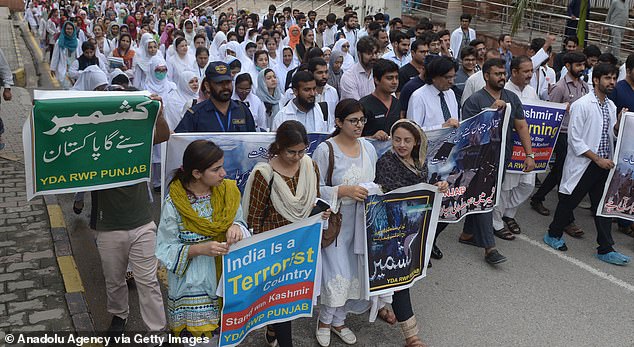 Young Pakistani doctors, paramedics and nurses chant anti-India slogans as they take part in a protest in their home country 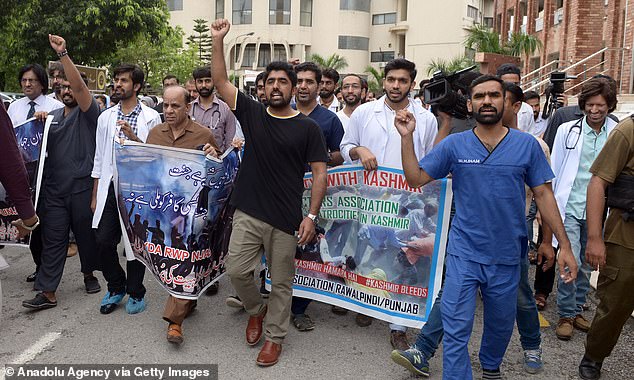 The Pakistani army has vowed to go to ‘any extent’ to prevent India’s power-grab over Kashmir, as protesters took to the streets of Rawalpindi to chant anti-India slogans

Large coils of razor wire cut off neighbourhoods as thousands of paramilitary troops patrol the streets.

Within neighbourhoods, some residents walk along small lanes while young children ride on scooters to rid themselves of boredom. Most shops are closed and residents said no fresh produce is arriving.

Pigeons and stray dogs in the scenic squares are untroubled by tourists, who fled in droves over the weekend after authorities ordered them to leave.

A repeated sentiment expressed by locals to AFP is they have lost their identity.

‘We are doomed, we have lost our identity today… We never felt like Indian citizens but now ‘officially’ this is India,’ Srinagar resident Mohammed Asif, 28, said.

For university student Adil Ahmad, from central Kashmir’s Budgam district, the development is nothing short of a ‘calamity’.

‘There’s no hope for the future. May God help us,’ he said.

What is Kashmir and why has India’s move created such a backlash?

Kashmir is a strategically important region located in northern India and north east Pakistan that has been the subject of decades-long fighting.

When India was partitioned under the terms of independence in 1947, Kashmir was given the choice of joining either India or newly-formed Pakistan.

Local rulers decided to join India and the two sides immediately went to war over the territory in a conflict that lasted from 1947 to 1948. 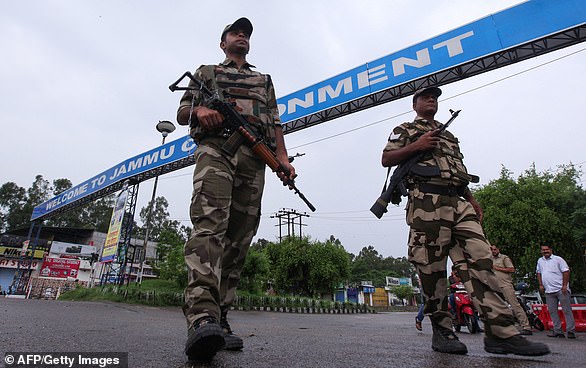 The result of the conflict was inconclusive, with neither side able to gain full control over the territory and settling into an uneasy ceasefire.

However, there has also been a long-running insurgency against Indian rule which has seen some 70,000 people – mostly civilians – killed since 1989.

Today, Pakistan controls around a third of Kashmir while India administers to the other two-thirds, including the Kashmir valley.

The state is the only Muslim-majority state in India, and until Monday was granted special privileges to make its own laws under Article 370 of the constitution.

However, that article was revoked by Narendra Modi’s Hindu nationalist government, risking sparking a racially-charged war.

Pakistan, itself an Islamic state, has vowed to go to ‘any extent’ to defend Kashmir, while India has flooded the area with tens of thousands of paramilitaries and imposed a strict curfew.

Demise toll from Genoa bridge collapse is 43 and all lacking accounted for as clean-up begins
Angelina Jolie steps out amid Brad Pitt dating Charlize Theron rumors
Jeff Bezos settles his divorce with wife MacKenzie but keeps 75 percent of their Amazon shares
Bloodsucking worms found in Florida rattlesnakes for the first time
Tommy Lee spends an evening bonding with sons Brandon and Dylan along with wife Brittany Furlan
Man allegedly faked his own kidnapping to get sympathy from his ex-girlfriend
Cuba Gooding Jr. spotted in the Hamptons after forcible touching arrest
Woman, 85, 'shoots her roommate and kills another in a domestic violence dispute at their home'