A model has revealed how she developed sepsis from a blister after wearing a pair of shoes.

Gemma Downey noticed her espadrille platforms were rubbing while walking to the train station last week.

Not long after, a tiny blister with a ‘strange colour’ formed on her heel, which quickly developed into swelling that ‘traveled around her ankle’.

In agony, Miss Downey went to A&E, where doctors dismissed her symptoms as nothing serious.

The 23-year-old, of Billingshurst, West Sussex, woke the next morning vomiting, with a ‘sky high’ heart rate and ‘blue’ skin.

Back in hospital, Miss Downey spent two days being treated for sepsis. Doctors warned if she had left it any longer, they may have been forced to amputate her leg.

Now home, medics have said it will be three months before she fully recovers. 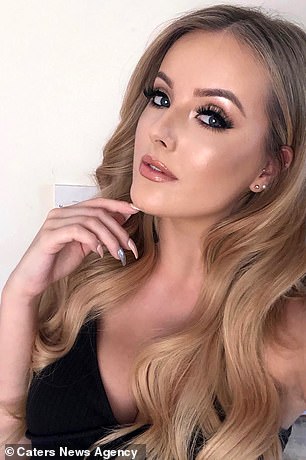 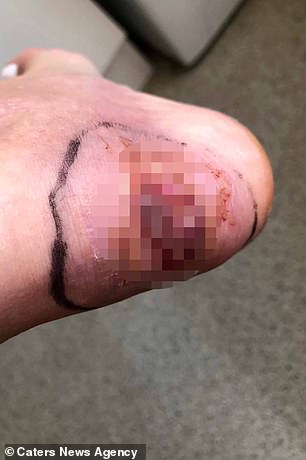 Gemma Downey (left) developed sepsis from a blister after wearing a ‘trendy’ pair of shoes. A ‘tiny blister’ with a ‘strange colour’ formed on her heel, which grew ‘a lot bigger’ (seen right) 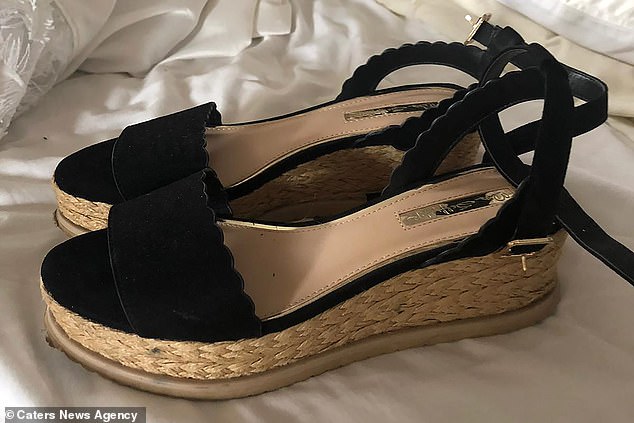 Miss Downey bought the espadrilles platforms (pictured) from a second-hand shop last year and had only wore them a handful of times. She noticed the straps were rubbing against her heel while walking to the train station last week. The blister later become agonising

What started as a blister (left), ended with Miss Downey vomiting, struggling to breathe and with ‘pains all over her body’. Once diagnosed with sepsis, the model (right) spent two days in hospital being treated. Doctors warned they may have had to amputate her leg

Miss Downey bought the espadrille platforms from a second-hand shop last year and had only wore them a handful of times.

When she put the shoes on last week, she noticed the straps were rubbing within a few hours.

‘It started off as my shoes rubbing on the back of my foot, it sort of broke the skin, like a cut,’ Miss Downey said. ‘At some point it looked like it was forming a tiny blister.

‘I had a plaster on because I didn’t think it was anything significant but later I did notice it had a strange colour, it went downhill from there.’

To relieve her discomfort, Miss Downey changed to a more comfortable pair of shoes, but it did little to help.

‘I started noticing I couldn’t walk properly and was limping, and was in pain a lot more than normal,’ she said.

‘My foot had swollen right up and was travelling round my ankle area, and the pain was absolutely awful.

‘I just dropped to the floor in agony, it was getting more and more swollen. ‘ 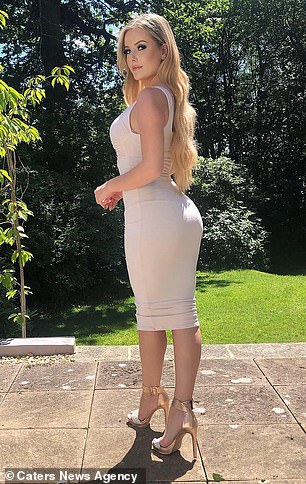 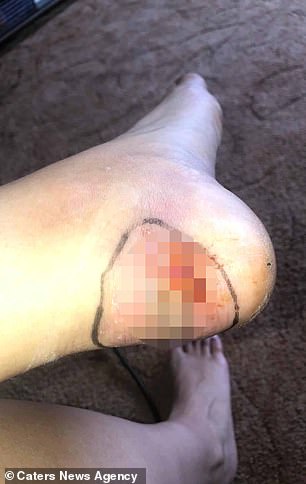 In agony, Miss Downey (left) went to her GP and A&E, where her symptoms were dismissed as nothing serious. She claims the blister (right) was causing her to limp and be in ‘more pain than normal’. This later made her foot ‘swell right up’, which ‘traveled around her ankle area’

Miss Downey went to her local GP, who prescribed her antibiotics.

When her pain continued to escalate, she took herself to A&E. Medics claimed there was no cause for concern.

The next morning, Miss Downey started vomiting and struggled to breathe.

‘I had pains all over my body, I had chest pain and trouble breathing, I knew something was seriously wrong,’ she said. ‘I was still being sick.

‘I went to a doctors’ appointment and he said my heart rate was sky high, my blood pressure was really, really low, [and] my temperature was high.

‘My skin had started getting blue and that’s point the blister got a lot bigger.’

Miss Downey’s GP warned her she was showing signs of sepsis and needed to go back to hospital immediately.

Sepsis occurs when the body reacts to an infection by attacking its own organs and tissues. Some patients who have battled sepsis need their limbs amputated.

Once diagnosed, the model was treated at hospital for two days before being allowed to go home. It is unclear what infection trigger her sepsis.

‘I was told I was showing early stages of sepsis but thankfully I was able to get treatment before it could escalate to anything further,’ she said.

‘I know it can be fatal. The doctors told me I was lucky I had acted on it and went to check it out because it could have been more serious. ‘ 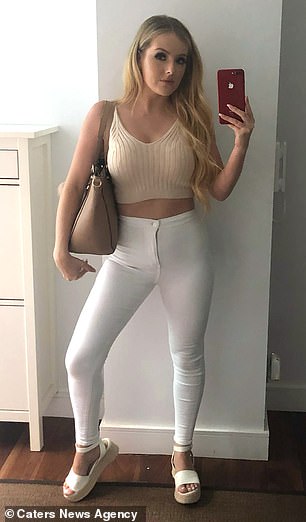 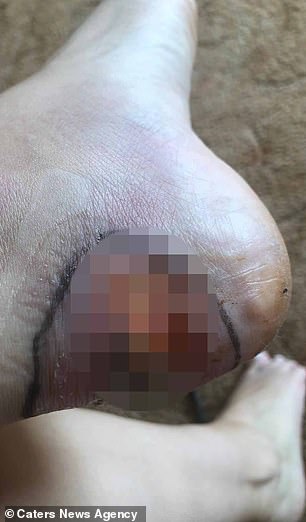 Miss Downey (left) has been told she can only wear flip flops or sandals for the next three months while her blistered skin recovers. She is speaking out to raise awareness of sepsis and the damage blisters, like the one she suffered with (seen right), can do

Although the worst seems to be over, Miss Downey has been told she can only wear flip flops or sandals for the next three months while her blistered skin recovers.

This may be an issue for her modelling career, where she is often called upon to wear heels.

‘My consultant told me I can’t wear shoes for the next three months at least, while it heals,’ Miss Downey said.

‘It won’t stop me from wearing heels because I love heels but for now I will need to see how the heeling process goes and then see when I can start wearing shoes with backs again.’

Miss Downey is speaking out to raise awareness of sepsis and the damage blisters can do.

‘Everyone assumes it was stiletto heels that caused it but the shoes I was wearing are very popular at the moment, they’re in trend, just normal every day shoes,’ she said.

‘I couldn’t believe something so insignificant could cause so much damage.

‘I’m thinking if it has happened to me, I’d like to warn other women about it, I want them to know if they do get a blister and feel bad, to trust their instincts and get it checked out.’

Sepsis occurs when the body reacts to an infection by attacking its own organs and tissues.

Some 44,000 people die from sepsis every year in the UK. Worldwide, someone dies from the condition every 3.5 seconds.

Sepsis has similar symptoms to flu, gastroenteritis and a chest infection.

Symptoms in children are:

Under fives may be vomiting repeatedly, not feeding or not urinating for 12 hours.

Anyone can develop sepsis but it is most common in people who have recently had surgery, have a urinary catheter or have stayed in hospital for a long time.

Other at-risk people include those with weak immune systems, chemotherapy patients, pregnant women, the elderly and the very young.

Treatment varies depending on the site of the infection but involves antibiotics, IV fluids and oxygen, if necessary.

Strictly's Seann Walsh and Katya Jones are SAVED after kiss scandal... as Vick Hope is sent home
The luxury home hidden inside this old mechanic warehouse will blow you away
Disgraced Labour MP Kate Osamor says she is 'proud' to live in a council house
Russian billionaire blocks British ex-wife on WhatsApp as she demands more than £5m of £450m payout
Rats have empathy and avoid actions that can cause pain to fellow rodents
100 leading doctors call for public to wear home-made masks
Car-rental giant Hertz files for Chapter 11 with $19BILLION of debt
Europe´s borders reopen for `summer unlike any other´